Accessibility links
What To Do With All That Snow? Cook It : The Salt If your front yard is buried under drifts, treat yourself to some snow cuisine. It's like making lemons out of lemonade — just steer clear of any lemon-colored snow outside, please. Sugar on snow and snow cream are two sweet places to start.

What To Do With All That Snow? Cook It

What To Do With All That Snow? Cook It 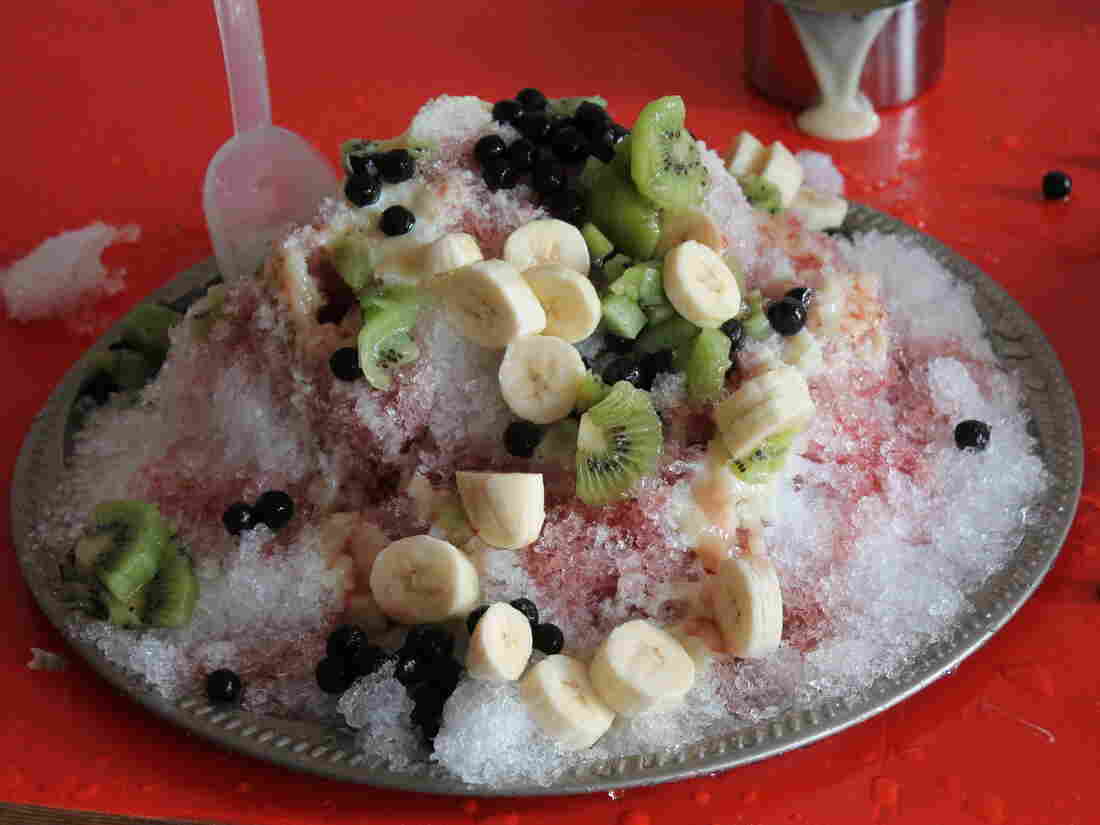 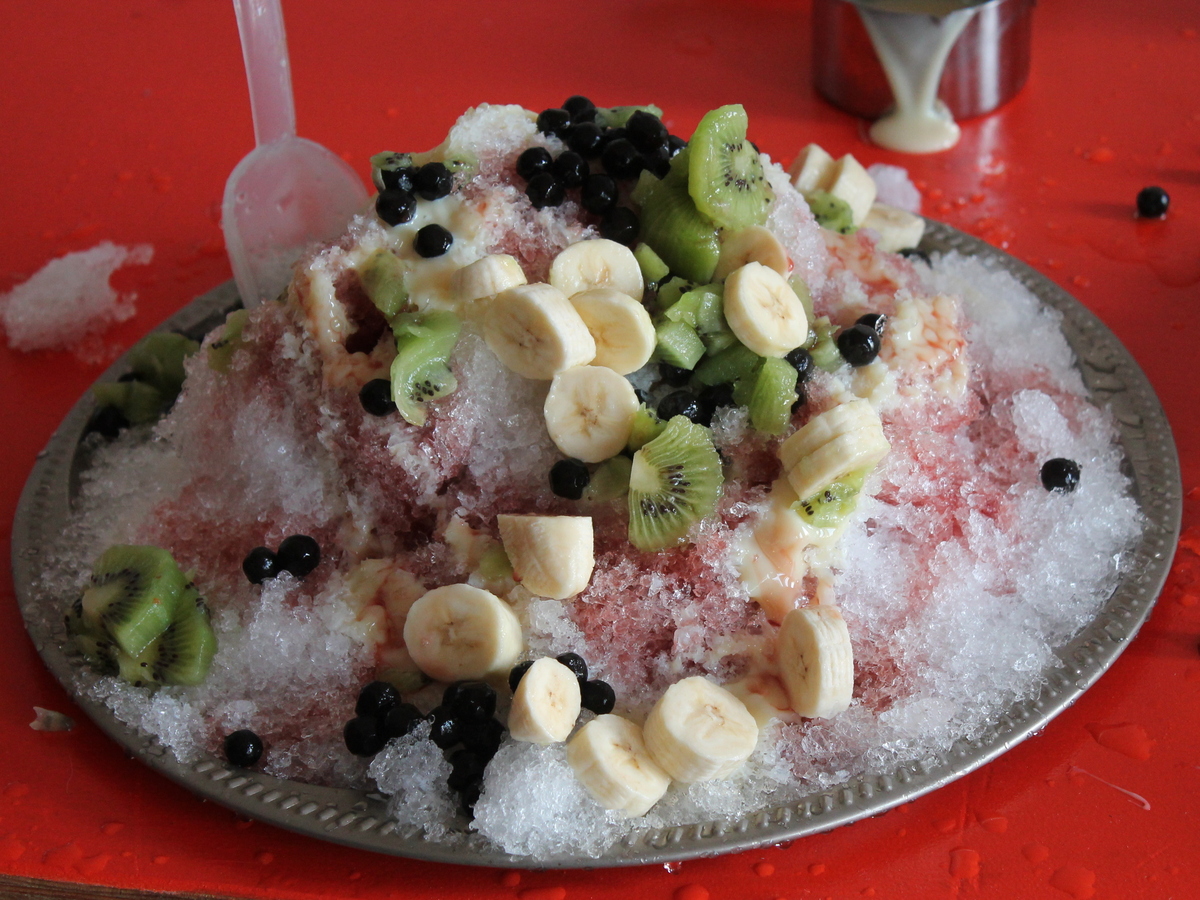 For a "Cooking With Snow" class taught through Knowledge Commons DC, instructor Willie Shubert made baobing, a shaved ice dessert from China.

Two feet of snow can be a major inconvenience. We feel for you, friends in the Northeast. To help you work through that serious snow surplus, we shuffled through our virtual recipe box for snow cuisine.

It's like being given lemons and making lemonade, though you definitely don't want to be doing anything with lemon-colored snow you find outside.

Cultures around the world have created dishes made with shaved ice, for which snow is an easy substitute. There's the classic snow cone, Hawaiian shave ice, Guatemalan granizada covered in condensed milk and fruit, or Thai Nam Kang Sai, which has the ice on top, to name a few.

For a "Cooking With Snow" class that Willie Shubert taught through Knowledge Commons DC in January, he picked one snowy dish he remembered from his time living in China: baobing. "You get this huge amount of ice and cover it with whatever you want," he says, such as syrup, red beans, tapioca pearls or fruit. "It's an erupted volcano of sweetness."

Snow can also be used in recipes where it becomes invisible, a secret surprise. There's the simple snow cream, and snow pancakes made with a handful of the white stuff. In his class, Shubert also made a Korean cold soba soup, with chicken and beef broth, black rice vinegar, Asian pears and cucumbers. Cold soup is probably more of a summertime dish, though.

"Cooking is really about transforming flavor and texture, color and shape," Schubert says. "You can do a lot of the same transformation with cold." 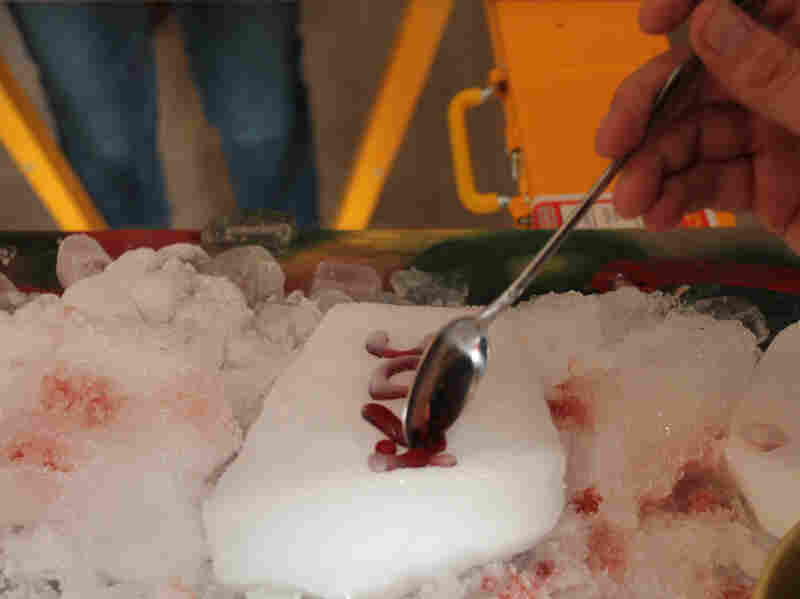 In the Knowledge Commons DC class, participants made candies by playing with flavored syrups on dry ice. Courtesy of Rachel Sadon hide caption 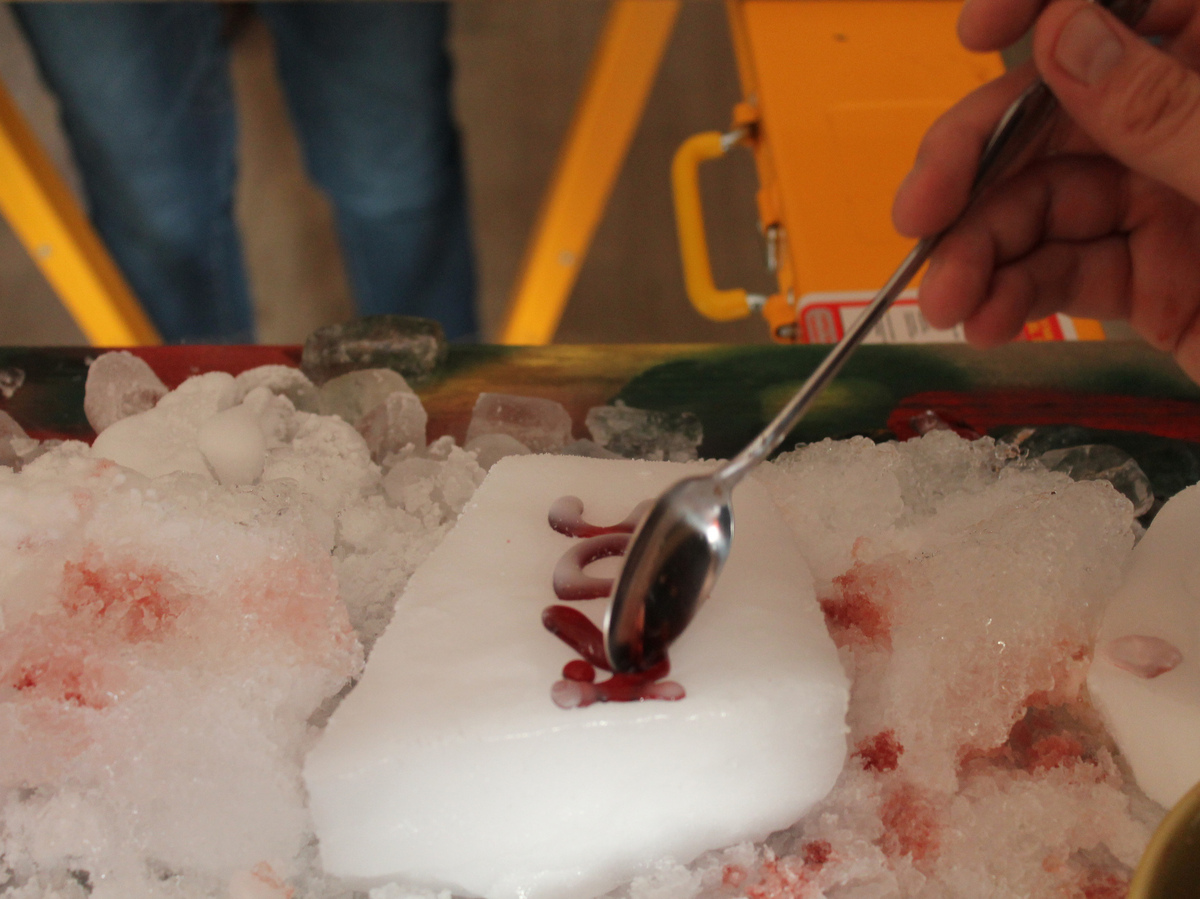 In the Knowledge Commons DC class, participants made candies by playing with flavored syrups on dry ice.

Inspired by a New England maple syrup classic, sugar on snow, he brought to class several syrups of various flavors — sweet maple, sour cherry, spicy mango — as well as vodka and hot sauce. He then set up a trough of supercold dry ice and carved depressions with a wood burner to hold his concoctions.

"When you pour [the syrups] onto dry ice, they start to transform," Shubert says. A short stay on the ice creates something with the texture of caramel; longer, it's like hard candy.

Shubert, a self-professed "salad evangelist," usually teaches classes on salad-making, using the form to experiment with flavors and mixtures. The hardened syrups and alcoholic lollipops made in his snow class were "an extension of that flavor alchemy," he says.

In places where there is no snow, like this winter in Washington, D.C., or if you just need a good party trick, Shubert suggests substituting this setup: dry ice sitting atop a bed of shaved ice. It's easy to make if you've still got your Snoopy Sno-Cone Machine.

But we have to admit, there's nothing quite like real snow.