Accessibility links
Meet The Calas, A New Orleans Tradition That Helped Free Slaves : The Salt A path to freedom for enslaved blacks, an engine of economic independence, a treat for Mardi Gras revelers. Once you know the fascinating history of this Creole rice fritter, beignets will seem boring by comparison. 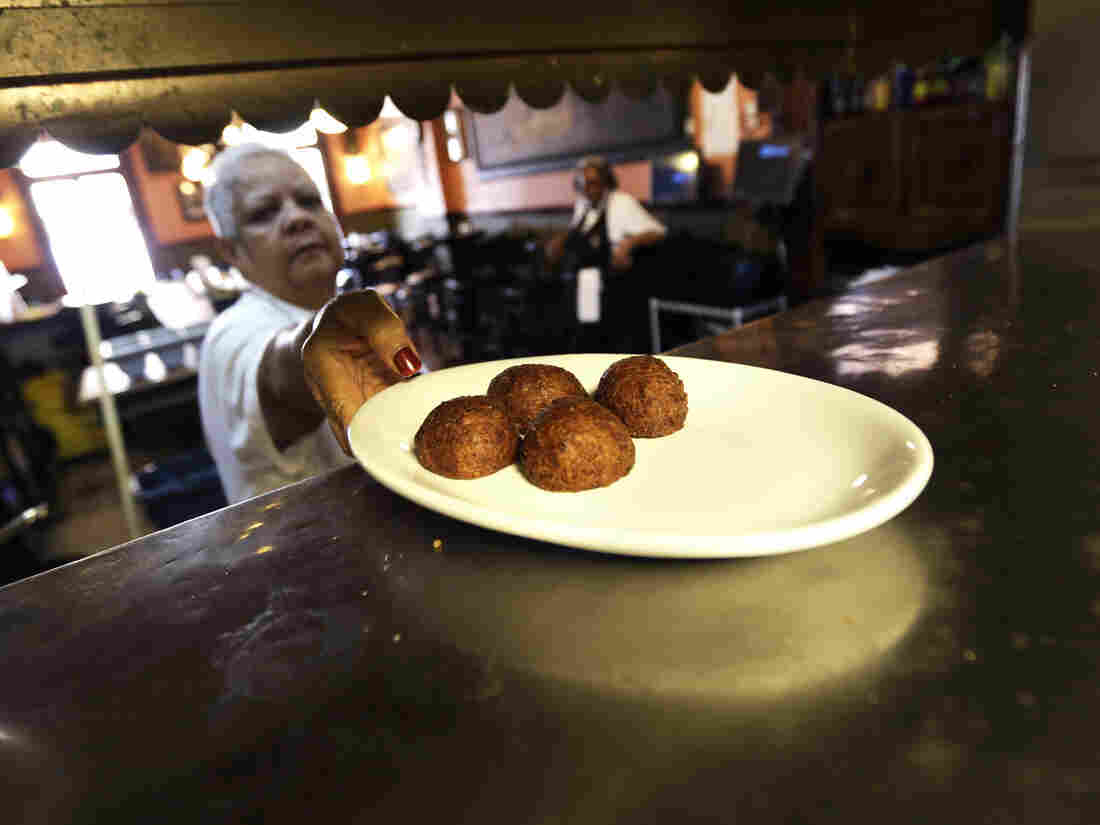 Waitress Gaynell James serves up calas cake from the kitchen at The Old Coffeepot Restaurant in the French Quarter of New Orleans on Jan. 28, 2013. Gerald Herbert/AP hide caption 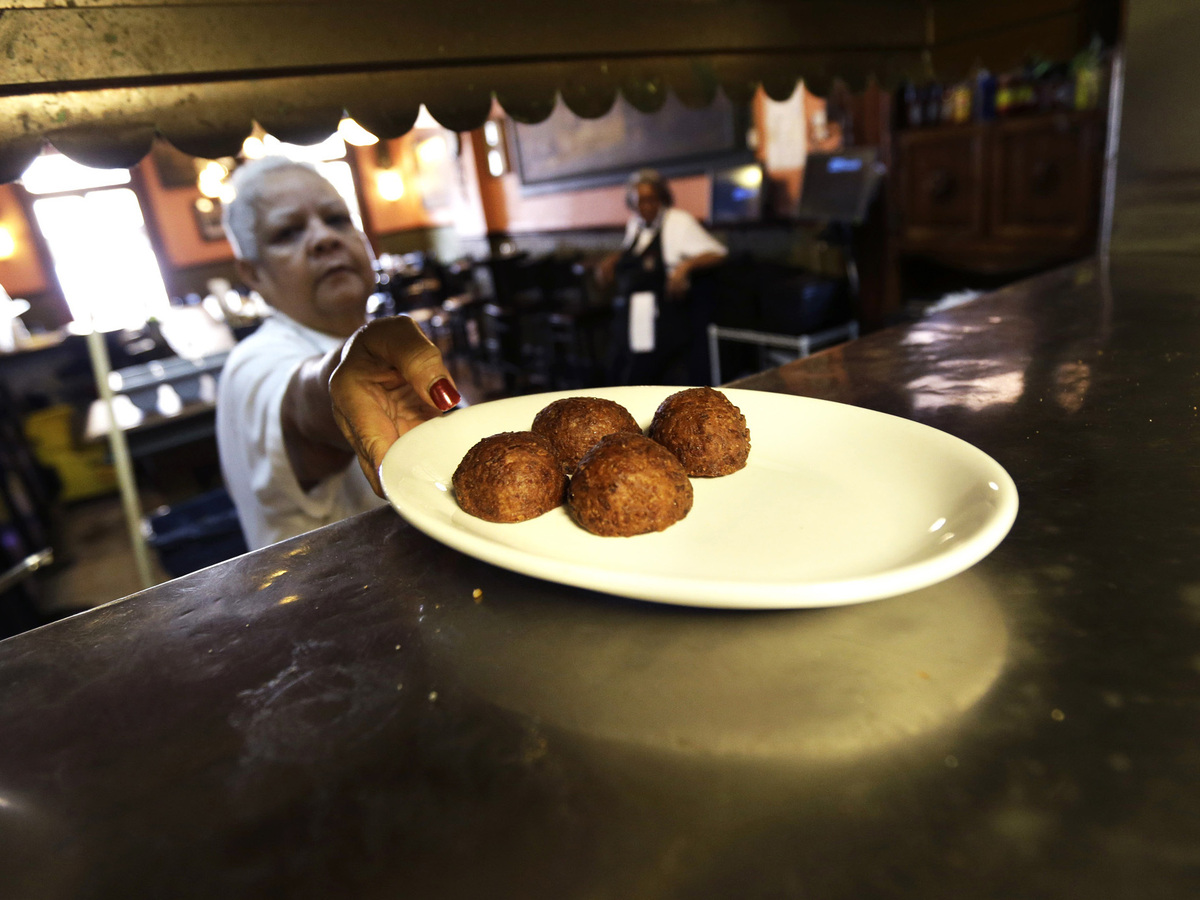 Waitress Gaynell James serves up calas cake from the kitchen at The Old Coffeepot Restaurant in the French Quarter of New Orleans on Jan. 28, 2013.

It's Mardi Gras, and down in New Orleans, the King Cakes, beignets and other gustatory delights are flowing freely. But if you prefer your culinary temptations with a side of history, allow me to introduce you to the calas, a Creole rice fritter with a storied past.

Never heard of a calas? Neither had I, until I listened to New Orleans food expert Poppy Tooker rhapsodize about their virtues on public radio last fall. Calas are made of leftover rice mixed into a sugary egg batter, then deep fried and served dusted with confectioner's sugar.

They're like beignets, only better — with a more interesting backstory, says Tooker, who hosts "Louisiana Eats" on NPR member station WWNO. Calas, she says, were once a vital part of African-American livelihood in the New Orleans, and even helped some slaves there buy their freedom.

"Once you know the history," she tells The Salt, "who'd want a boring old beignet?"

Scholars think slaves from rice-growing parts of Africa probably brought calas to Louisiana. Some trace calas to Ghana, others, to Liberia and Sierra Leone. In the 1700s, during the days of French rule, slaves were given one day off each week, usually Sundays. And so after church, African women would roam the streets of the French Quarter touting their wares with the chant "Belle Calas! Tout chauds!" — "Beautiful calas! Very hot!" 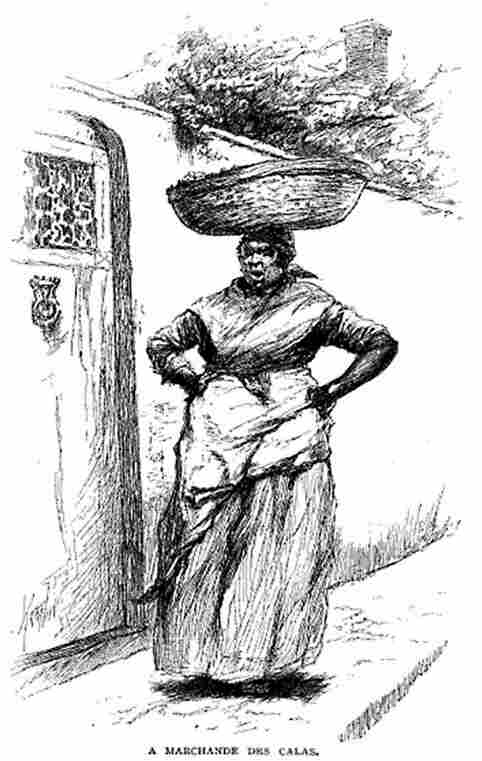 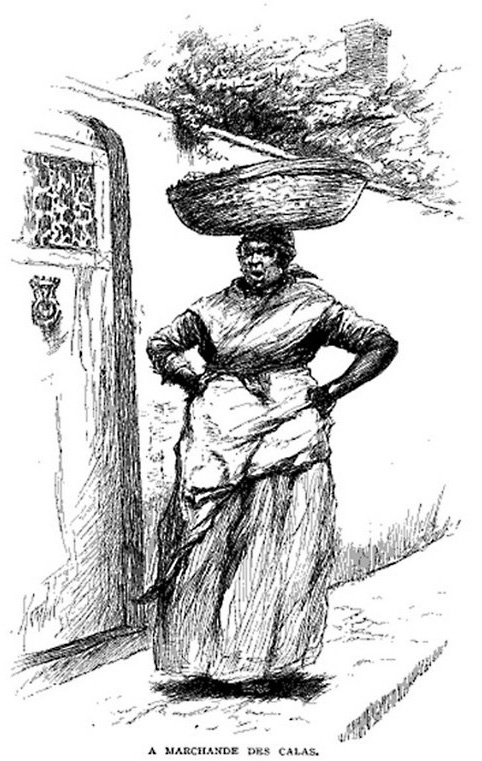 When the Spanish took control of Louisiana in the 1760s, they brought with them a powerful legal instrument, coartacion, which gave slaves the right to buy their freedom. For enslaved black women in the city, Tooker says, selling calas was a key way to earn money for these purchases.

These "women were able to buy freedom for their families and for themselves," she says.

More than 1,400 New Orleans slaves bought their freedom under Spanish rule. But it's not clear just how many did so with calas money.

As the African-American culinary historian Jessica Harris told Salon, "Not all calas vendors were enslaved. And the ones who were often sold them for their mistresses. If they were lucky, they were allowed to keep a portion of the money, or perhaps have it go towards their freedom."

Americans put the kibosh on coartacion soon after the 1803 Louisiana Purchase. But New Orleans remained home to thousands of free blacks – and throughout the 1800s, many of them, especially women, made their living selling calas and other street foods.

In the 20th century, these vendors slowly disappeared, until, by 1940, according to an old Works Progress Administration report, just a single calas street merchant remained.

"Friends and neighbors prepared calas for their families and for the maskers who stopped by for a little 'recess' from their parading," Vaz tells The Salt via email.

And the fritters did survive in at least one public eating space: The Old Coffeepot Restaurant, a French Quarter breakfast joint, where they've been on the menu for decades.

Spreading the calas story to the rest of New Orleans — and the world — has been Tooker's mission in life for more than 25 years. And thanks to her and other like-minded enthusiasts who promote calas in cooking classes and conferences, the fritters have been appearing on more restaurant menus over the past decade.

After chef Frank Brigsten purchased Charlie's in 2009, he replaced hushpuppies on the menu at the longtime neighborhood seafood joint — a fixture in Harahan, outside New Orleans, since the 1950s — with a savory take on calas.

"It got so popular that now we serve shrimp calas as an appetizer," he tells The Salt.

In recent years, calas have made their way into a higher-profile tradition as well. Each Mardi Gras, New Orleans' Haydel's Bakery chooses a different porcelain figure to bake into its famed King Cakes. In 2010, that figurine was in the shape of a calas lady, her basket of "belle calas" balanced on her head — a symbol of a New Orleans long gone but, it would seem, not forgotten.