Accessibility links
Sandwich Monday: Mountain Dew A.M. : The Salt For this week's Sandwich Monday, we take a break from between two slices of bread, and try a drink on Taco Bell's breakfast menu. It combines Mountain Dew, orange juice, and profound personal sacrifice. 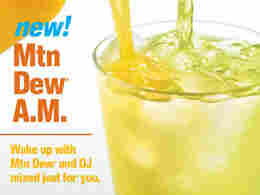 They're not kidding. tacobell.com hide caption

Look, I know this isn't a sandwich. And it barely even qualifies under the Sandwich Draft Principle. But when we heard Taco Bell was selling something called Mountain Dew A.M. — Mountain Dew mixed with Orange Juice, as a breakfast drink — we felt duty-bound to drink it.

Ian: The only worse liquid to wake up to is discovering you wet the bed. 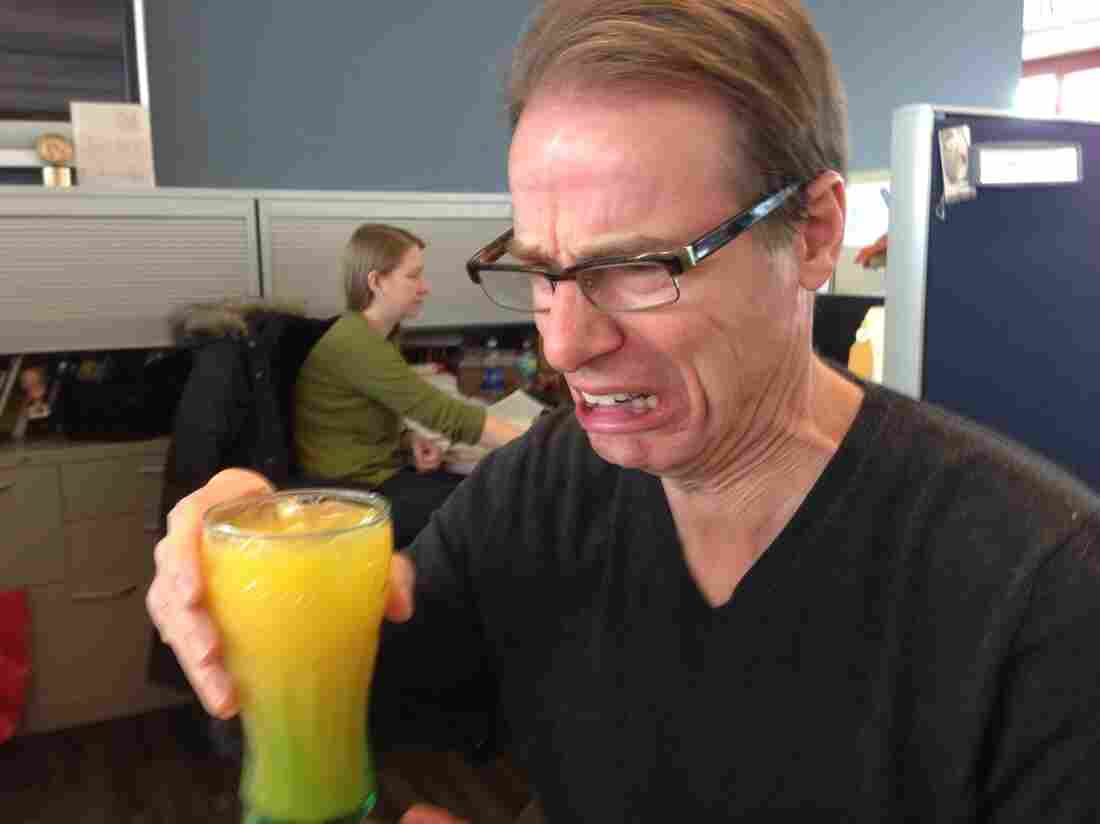 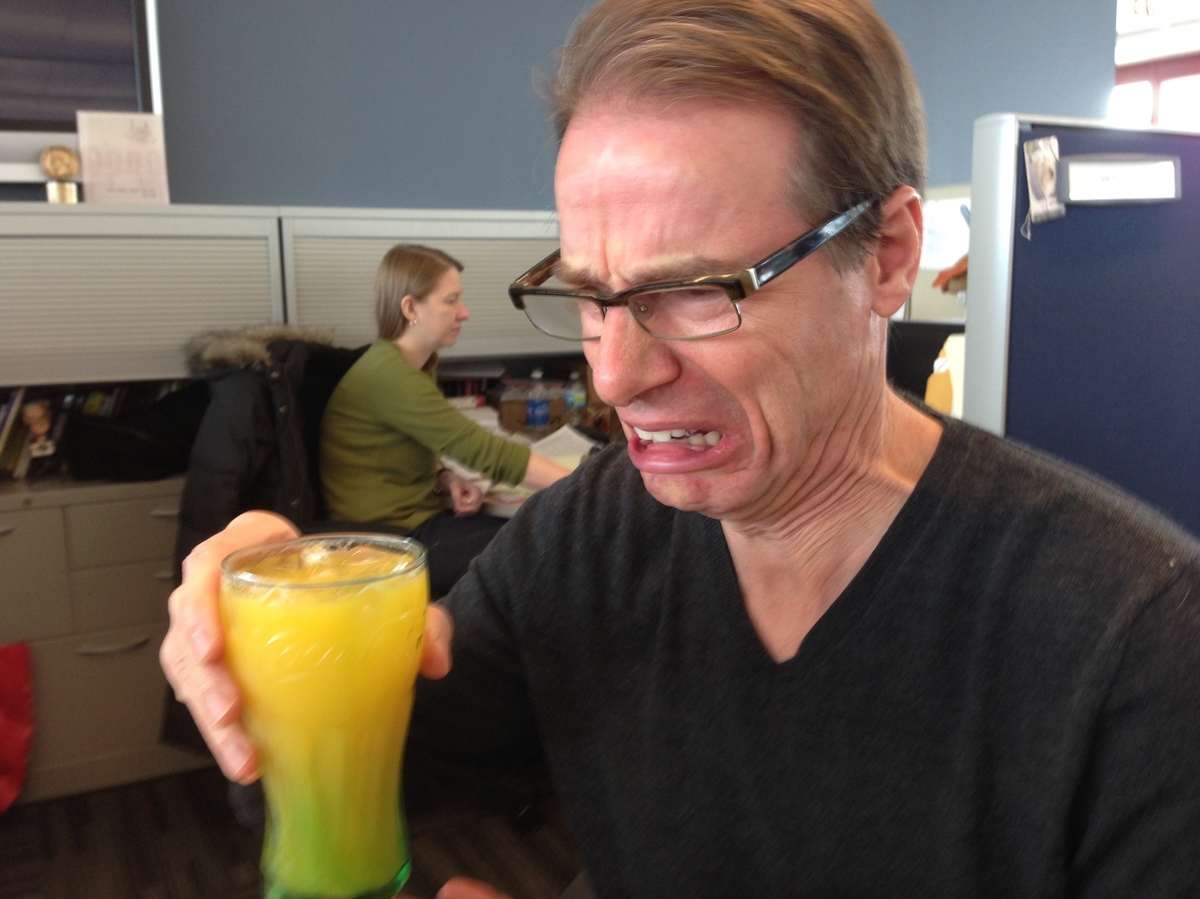 Ian: Guys, I think my cocktail is broken.

Robert: Food Science has finally come up with something that tastes worse than drinking orange juice right after brushing your teeth. 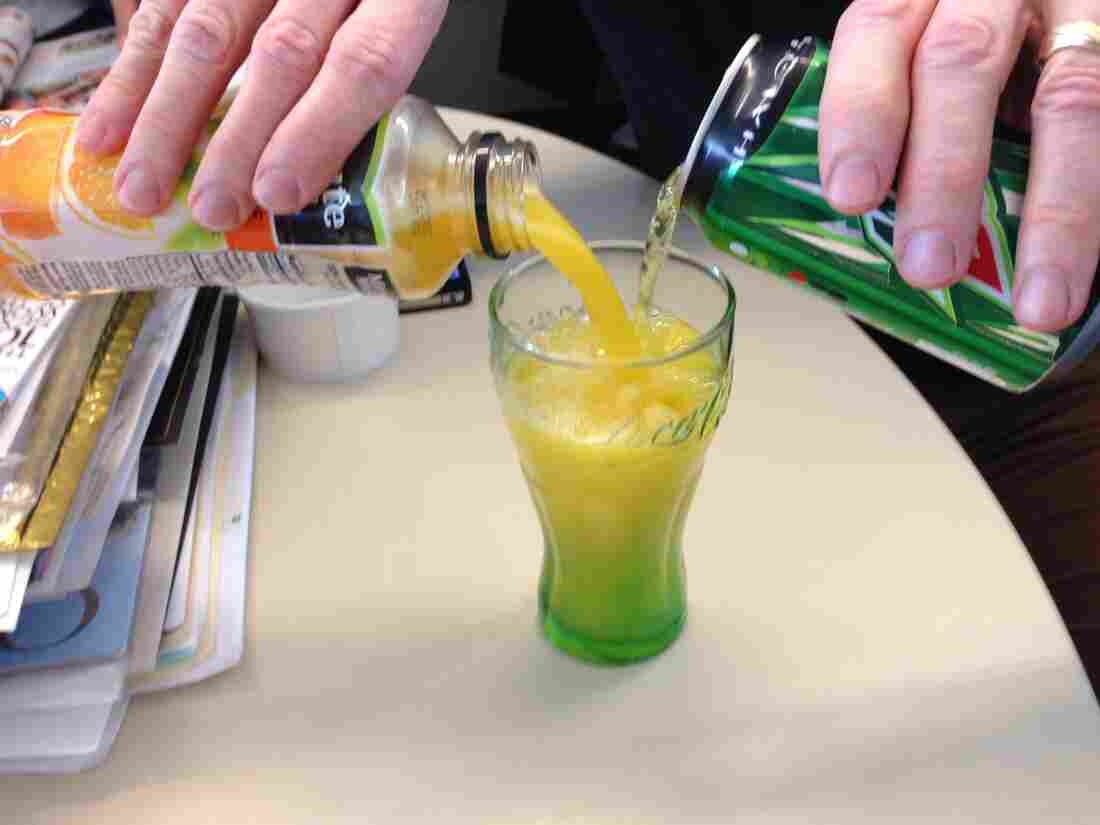 As he often does, Robert reminded us of Tom Cruise in "Cocktail." NPR hide caption 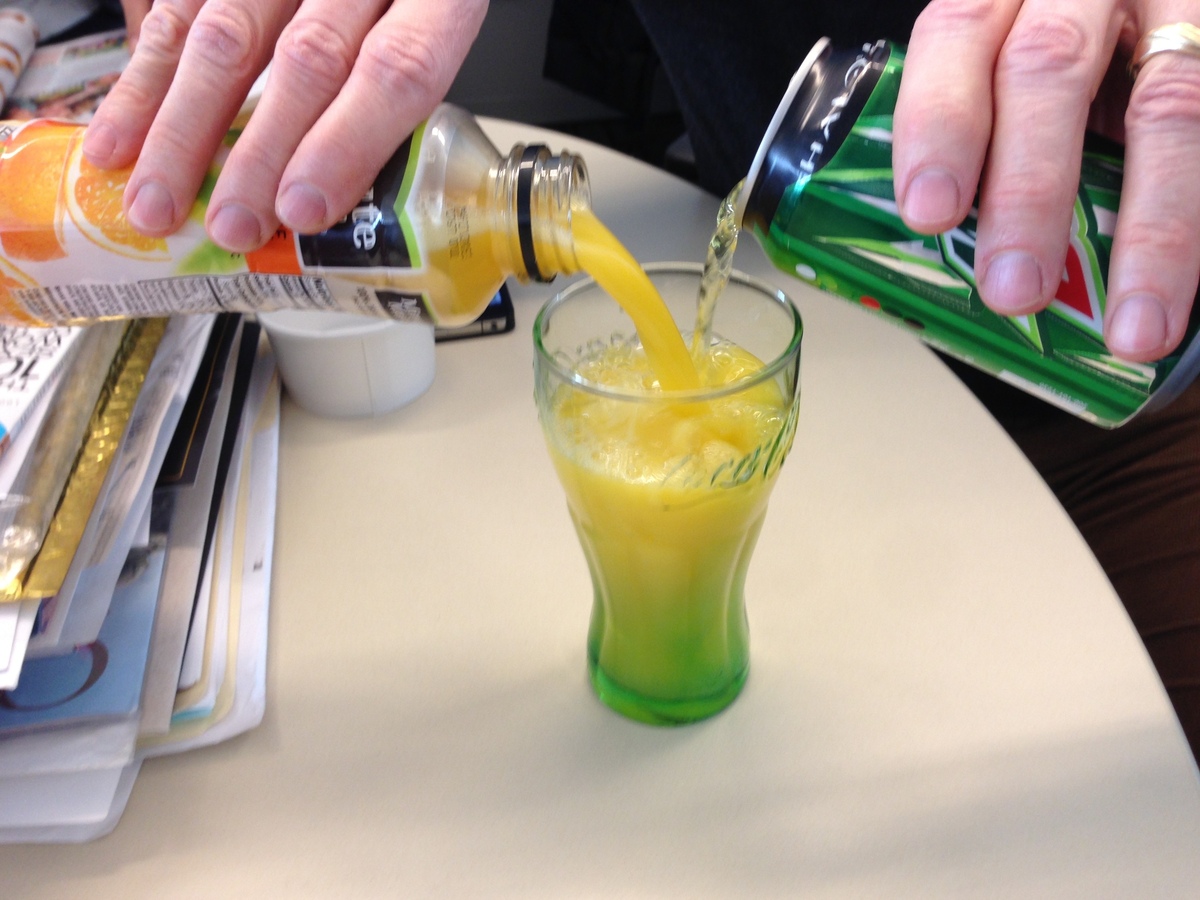 As he often does, Robert reminded us of Tom Cruise in "Cocktail."

Ian: Is it OK if I pour ALL of this out for my homies?

Eva: The blending of unlikely ingredients is the key to so many Taco Bell creations. Doritos and taco shells. Mountain Dew and OJ. An unsolved mystery and ground beef. 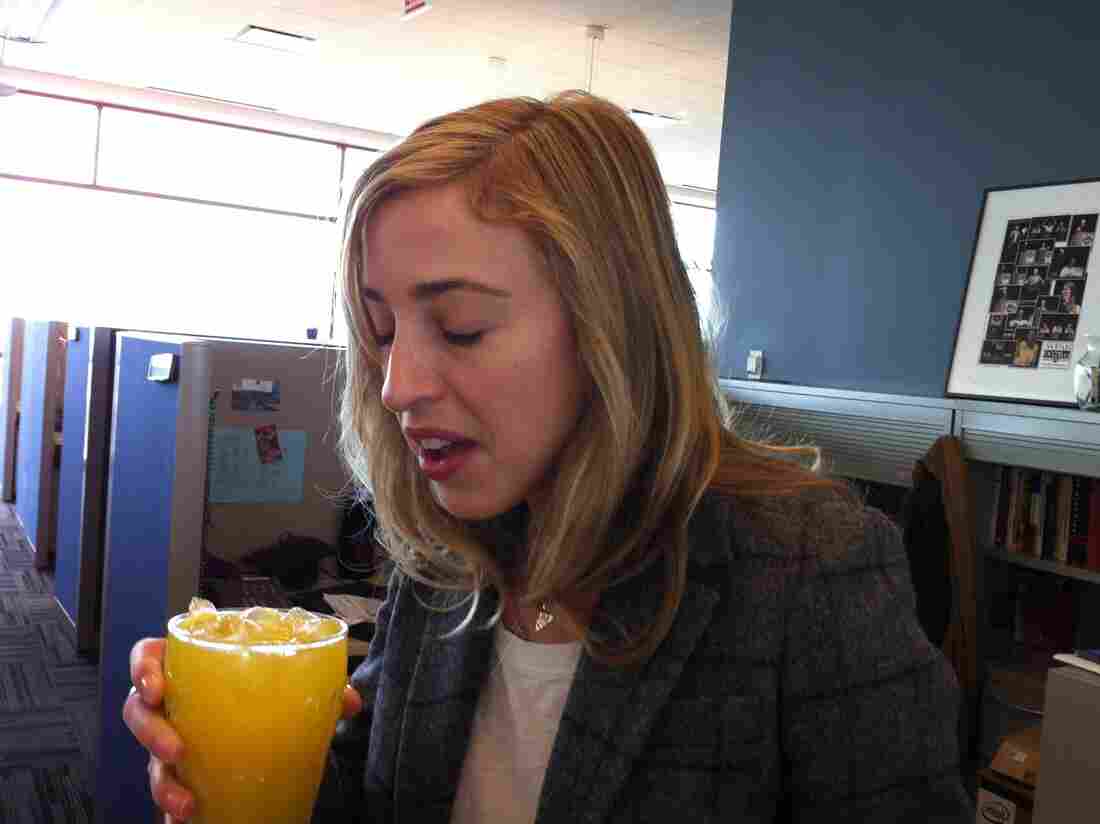 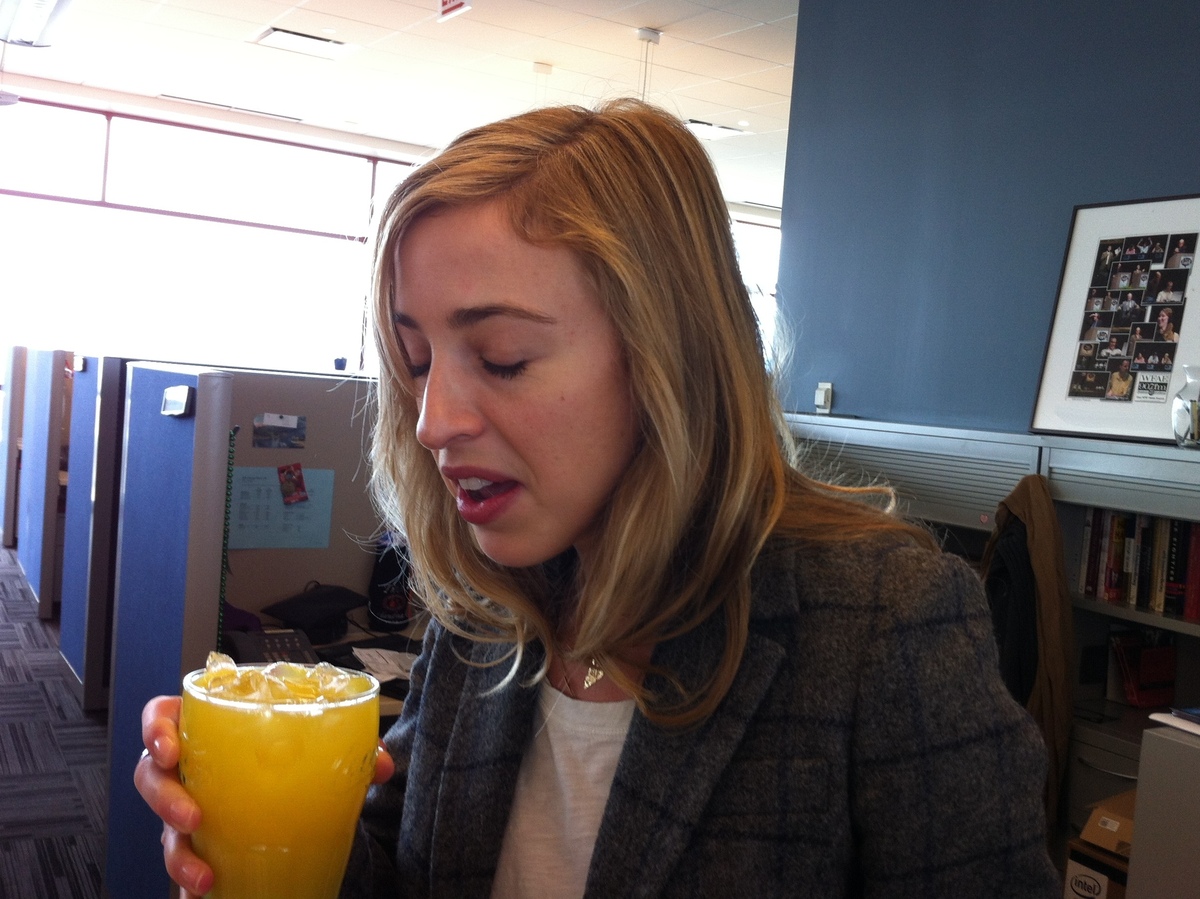 Ian: Sure their Mountain Dew A.M. is pretty bad, but when I can't sleep, nothing beats Taco Bell's new Seven-Layer Burrito P.M.

Eva: Hold your nose while you drink it and you can barely taste it. It's even better if you hold your mouth and just let it pour down your shirt.

Robert: Hey guys, as soon as I can get my heart rate below 200, can you guys help me shut my eyelids?

[The verdict: Worse than expected. Weirdly, it gets better the more you up the Mountain Dew content, but still doesn't make anything better than the original ingredients are on their own.

When I was a kid, on special occasions, my parents used to serve me a Sprite and orange juice, which they called a "Screwdriver." I'm sure there was many a freaked out teacher who heard 6-year-old me say I liked to drink screwdrivers with my mom and dad. Anyway, if you must mix yourself an orange juice and soda, make yourself a "Screwdriver," and you'll be better off. ]

Sandwich Monday is a satirical feature from the humorists at Wait! Wait! Don't Tell Me.