Accessibility links
One City's Love Affair With Processed Cheese : The Salt If you're not from St. Louis, you've probably never heard of Provel. It's a processed blend of cheeses extolled in the area for its buttery texture and smoky, tangy flavor. Now Provel has made its way into the unlikeliest of places: the hipster foodie mecca of Brooklyn. 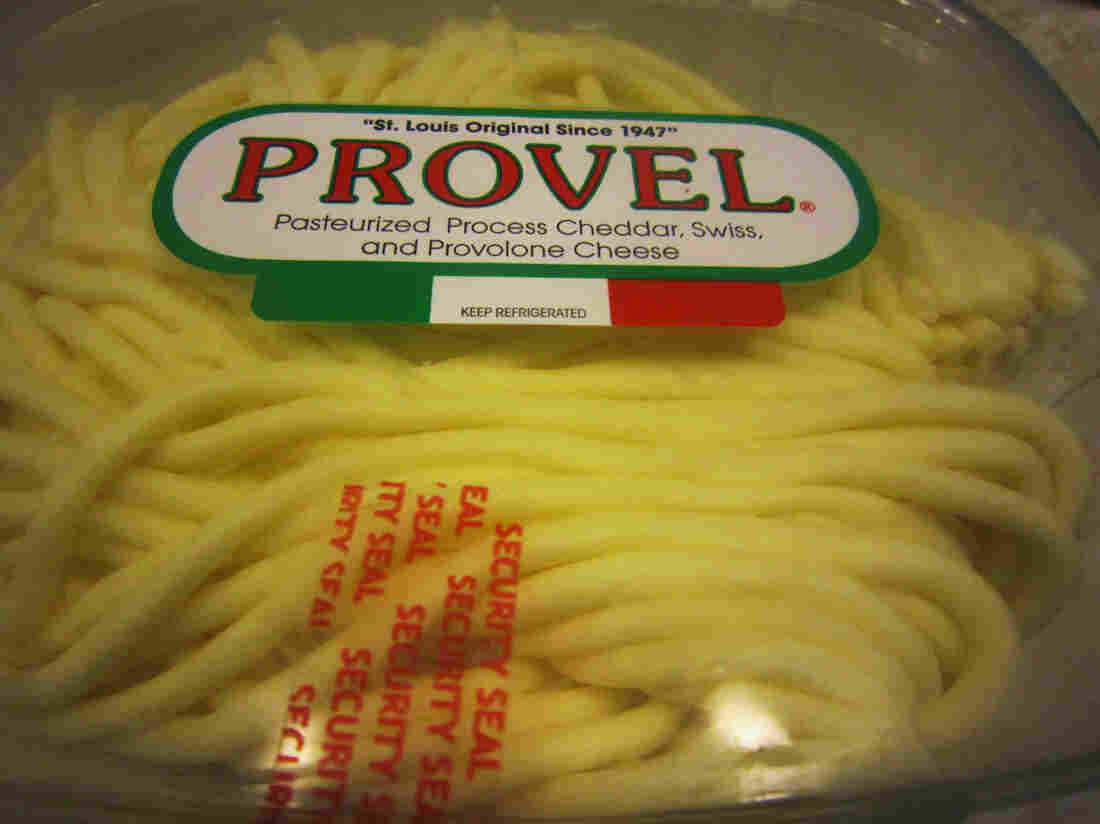 Provel, as seen in its native habitat. Jessica Stewart/Allergic to Air hide caption 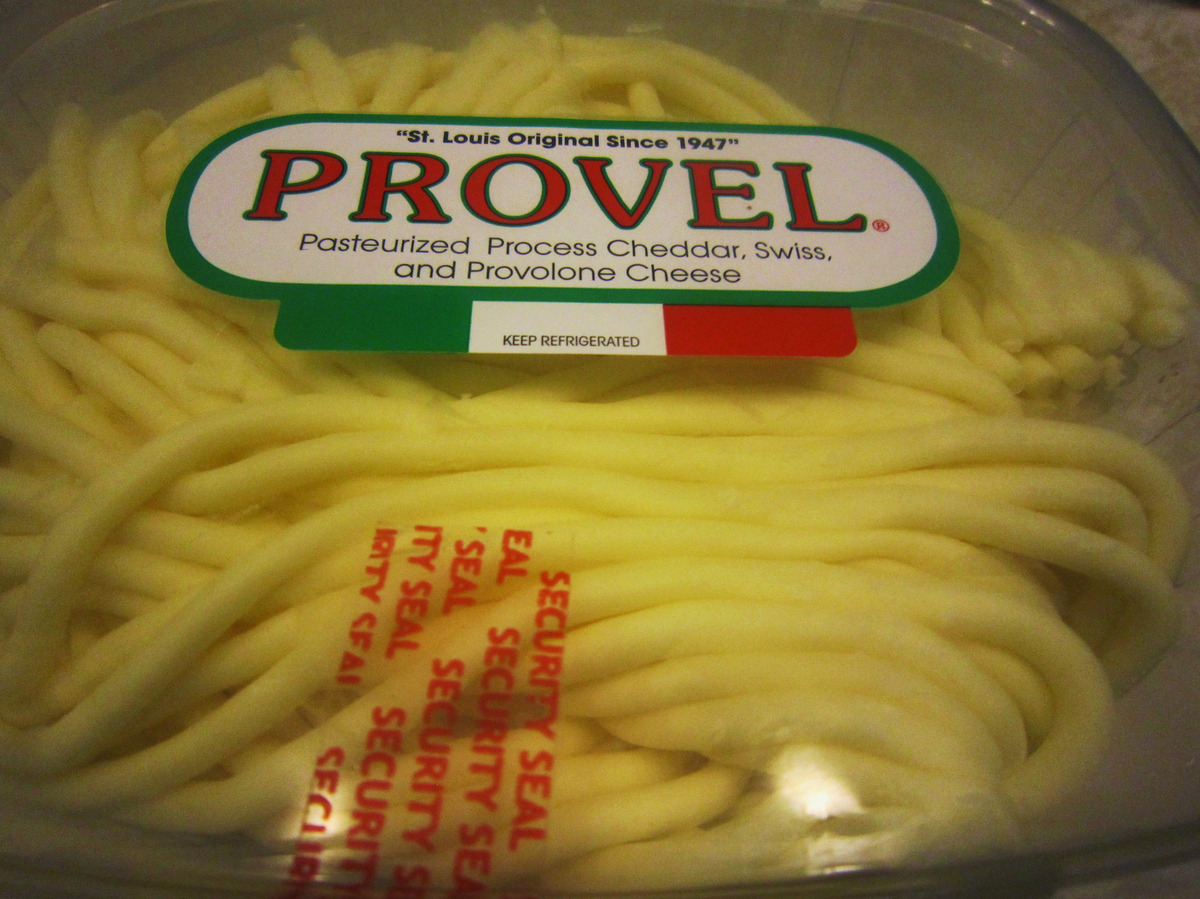 Provel, as seen in its native habitat.

With 30 Rock off the air, Judah Friedlander has time to indulge other interests. Like processed cheese.

Friedlander, who played Frank on the sitcom (the guy with all the custom baseball caps), says he's been "obsessed" for the past several years with Provel, a processed blend of Swiss, provolone and cheddar rarely found outside its hometown of St. Louis.

"It's not even legally cheese," Friedlander tells The Salt. "It's melted plastic from the '80s."

Even its fans admit Provel is an acquired taste. For me, eating raw Provel is akin to chewing on a candle that's lit at the other end. It has the texture and sheen of wax, with an aftertaste redolent of the liquid "smoke flavor" that is the last ingredient listed on the label of a block of the stuff.

But people raised eating Provel love it. It's practically unknown outside of St. Louis, but in that city Provel can be found all over, melted onto pizzas and hamburgers and adorning pasta and salads.

"People from St. Louis love it," Tom Coll, owner of Joe Fassi Sausage & Sandwich Factory on the Hill, the city's Italian neighborhood, tells The Salt. "When we switched to provolone, people wanted the Provel."

St. Louis natives talk a great deal about how it's buttery and smoky and doesn't melt all over everything like traditional pizza cheese.

"I like cheese that's a little sharper," says Mike McCubbins, who works at the city's central library. "Provel has more tang than, say, mozzarella." 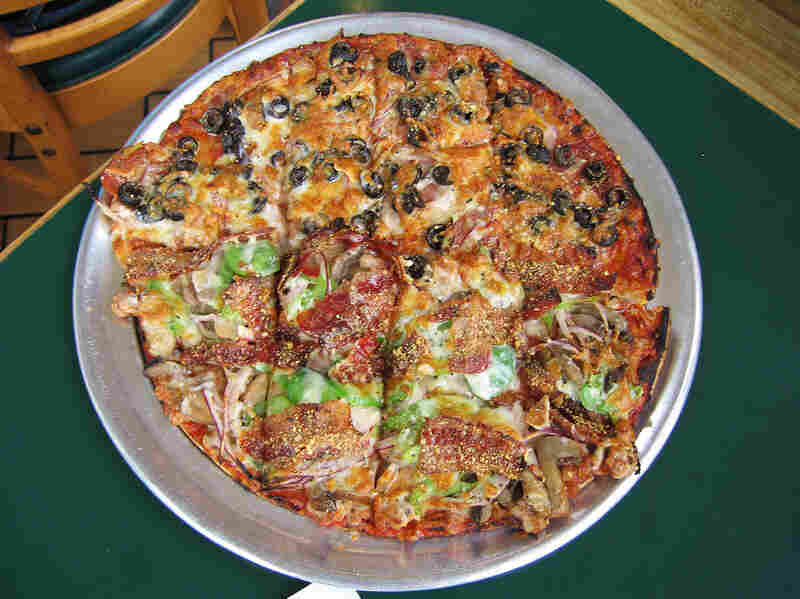 An Imo's pizza from St. Louis, made with Provel, the regional specialty cheese. Wikipedia hide caption 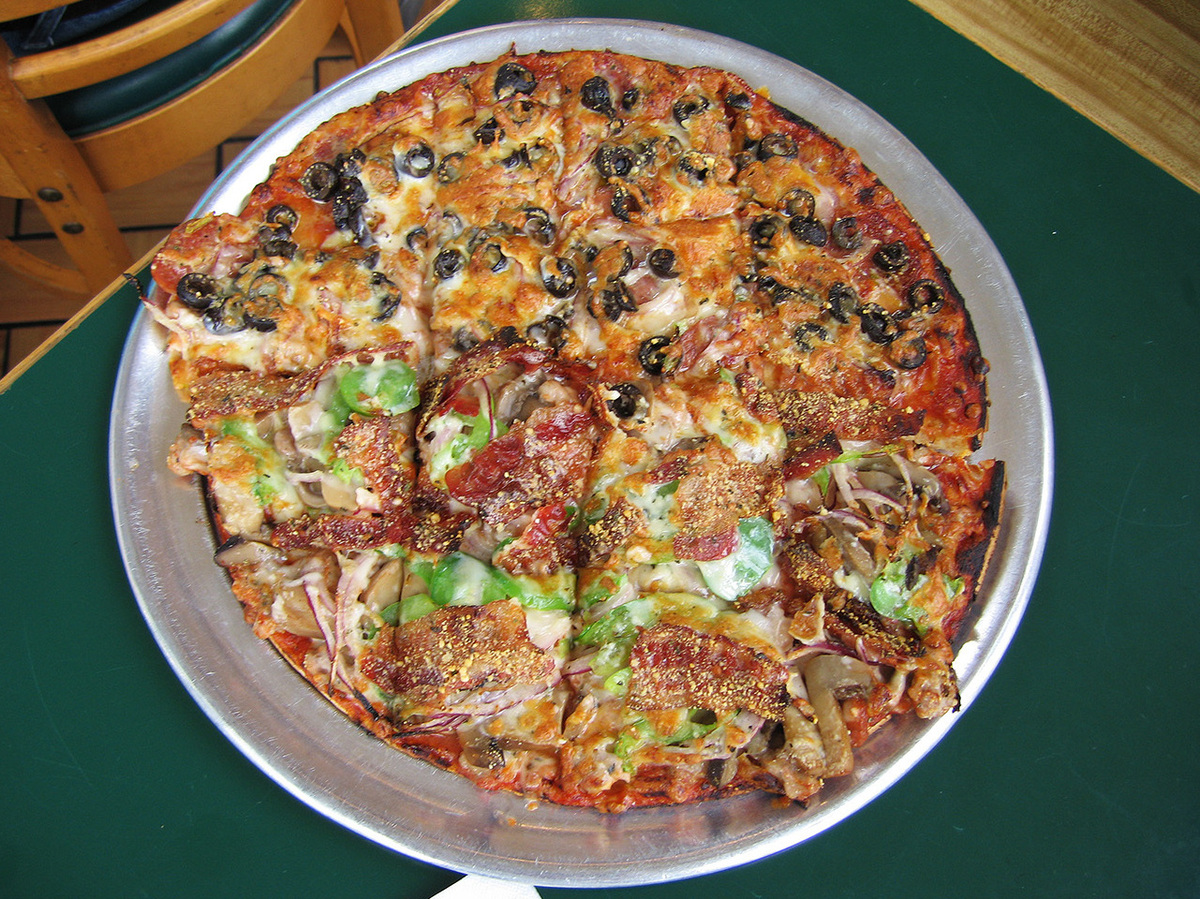 An Imo's pizza from St. Louis, made with Provel, the regional specialty cheese.

There are disputes about the origin story of Provel, but it's said to have been invented on the Hill shortly after World War II. Today, more than 2 million pounds are consumed each year, according to Margie Imo, president of Imo's Pizza.

The cheese got its big break, so to speak, with the 1964 opening of Imo's, which has been a St. Louis staple for generations — the pizza many people grew up on and one of the few, back in the day, that delivered.

Imo's now has more than 90 locations, mostly in the St. Louis area. Imo's is both the prime purveyor of Provel, sitting atop its cracker-thin crusts, and its distributor (Provel is made by a subsidiary of Kraft).

Those who leave the city pine for a product that they can't get except on visits home. "Every time we come back to town, it's something I make my family order," says Andrea Sigritz, who now lives in Arlington, Va. "We get the Imo's pizza with Provel, and it's on the salad."

But it hasn't taken hold outside St. Louis — except maybe in the Clinton Hill neighborhood of Brooklyn. A restaurant called Speedy Romeo, which is co-owned by a Missouri native, now serves a pizza topped with Provel called the "St. Louie."

Speedy Romeo is the sort of place where staff brags about mozzarella and ricotta "made in-house daily." Provel, arriving as it does from the Imo's warehouse in St. Louis in boxes packed with dry ice, "is almost like the antithesis of all that," says manager Jef Diesel.

Having just partaken of a St. Louie, Diesel talks about how high-temperature, wood-fired Provel takes on a golden brown, caramelized skin, while retaining "the umami of the flavors and the smokiness of it. It's one of those strong-contrast, secret ingredients," Diesel says.

The St. Louie is now Speedy Romeo's second-most-popular pie. But before you decide Provel is going to be the next PBR-style, down-market phenomenon, remember: It won't please every palate.

At Pi, another local pizza chain in St. Louis, some of the servers wear T-shirts with the word Provel crossed out. 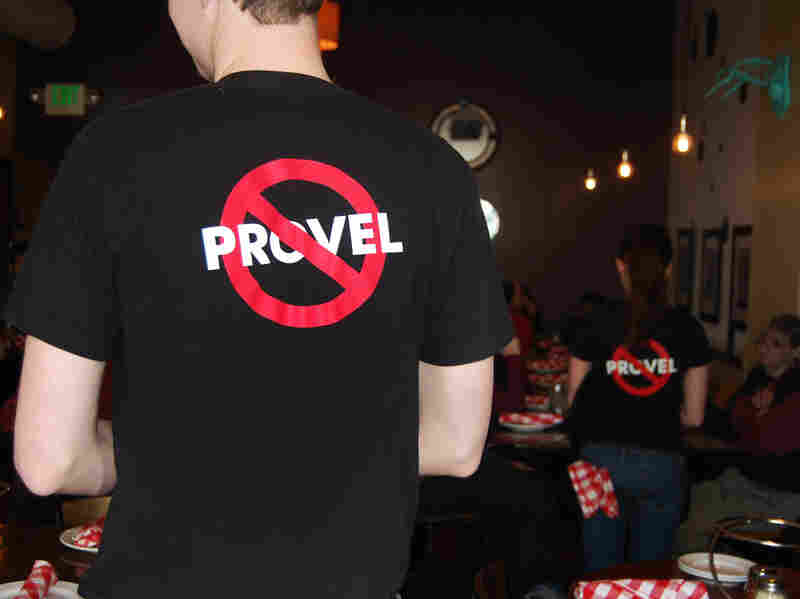 The St. Louis-based Pi Pizzeria chain prides itself on not using Provel in its pizzas. Alan Greenblatt/NPR hide caption 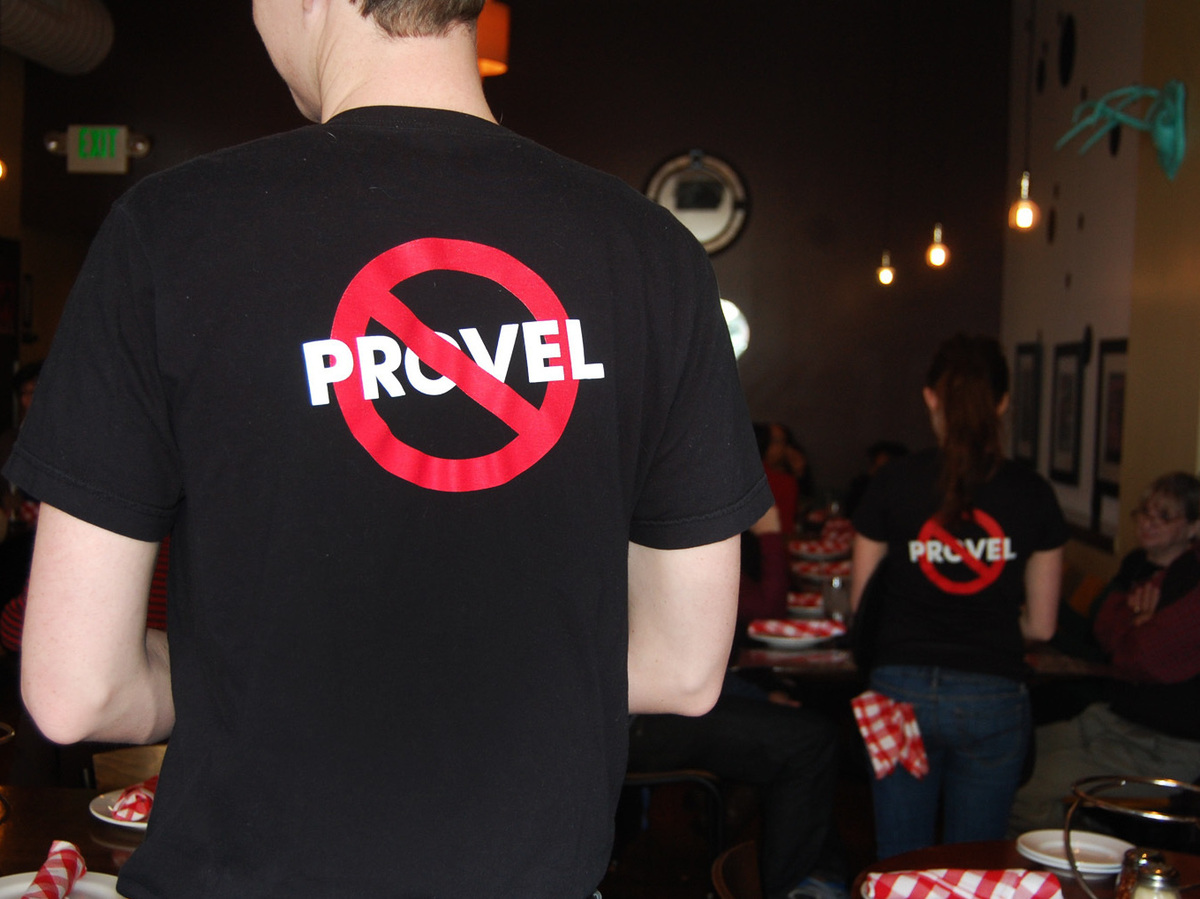 The St. Louis-based Pi Pizzeria chain prides itself on not using Provel in its pizzas.

"Our no-Provel shirts are more of a statement than a dislike of the product," says co-owner Chris Sommers. "I do think this helped get people in the door, particularly in our early days. We chose to differentiate in a Provel-heavy town, and that's been good for our business."

But Pi, while rapidly expanding and a favorite of President Obama (and mine), is nowhere near as ubiquitous as Imo's in St. Louis.

During his visit to the city last week, Friedlander sent out "I must be in St. Louis" photos of Imo's slices via Twitter and Instagram. He ordered several more pies from Imo's and invited his nightclub audience to "enjoy it or hate it."

He didn't have to wait for takers. Admittedly, people had been drinking, but all five pizzas were consumed well before Friedlander was done greeting fans and posing for their pictures after the show.

"It's disgusting and delicious," the comedian said.

A previous version of this story misstated the Brooklyn neighborhood where Speedy Romeo is located. The restaurant is in Clinton Hill, not Greenpoint.