Accessibility links
When Resistance Is Futile: Bring In The Robots To Pull Superweeds : The Salt After years of being burned by Roundup, weeds like palmer amaranth, marestail and giant ragweed have evolved resistance to the herbicide. To fight them, scientists are now looking to a concept that seems straight out of sci-fi.

When Resistance Is Futile: Bring In The Robots To Pull Superweeds

When Resistance Is Futile: Bring In The Robots To Pull Superweeds 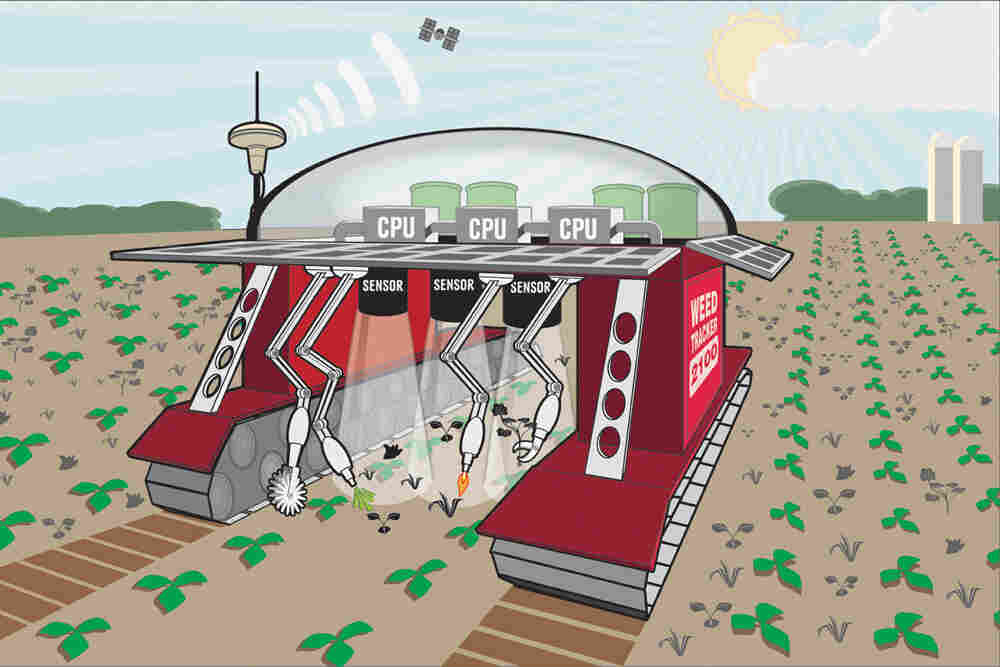 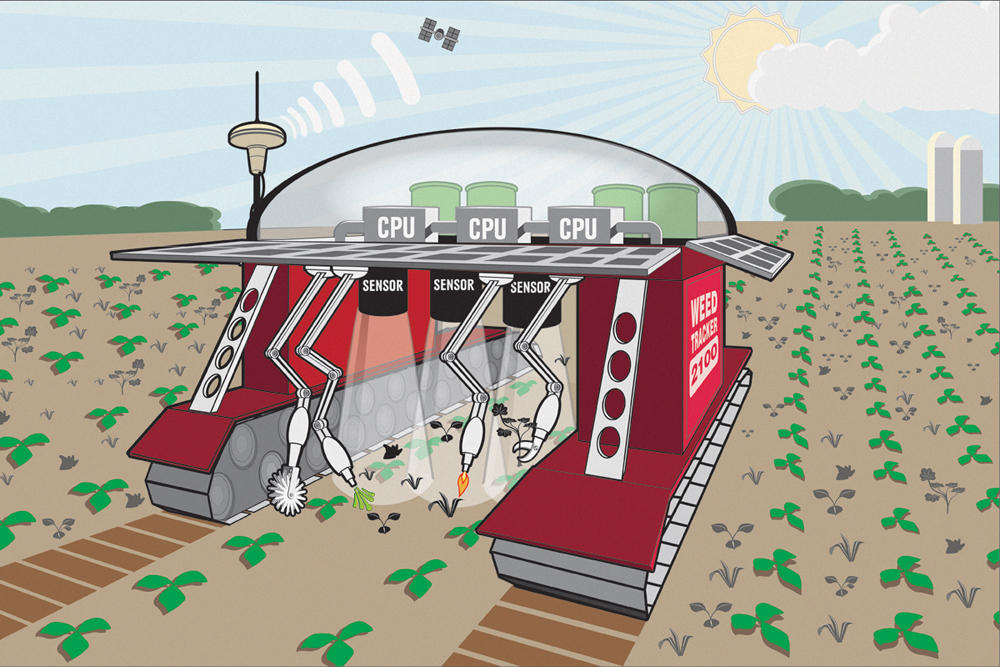 An illustration imagines what a weed-seeking robot could look like, armed with different tools to attack different problem plants.

A future without weeds would be a kind of farmer utopia, but currently, herbicide-resistant "superweeds" are part of today's reality. Some researchers, though, are looking for a solution that seems ripped from science fiction: weed-seeking robots.

After years of being burned by glyphosate, the generic name for Roundup herbicide, weeds like palmer amaranth, marestail and giant ragweed are able to live long and prosper where the widely used chemical is no longer effective. That concerns Steve Young, a weed ecologist with the University of Nebraska, Lincoln's West Central Research Center in North Platte.

"Right now it's sometimes recommended that if you've got a herbicide-resistant weed population, to go out and spray more or do another application, because that will kill it, maybe," Young says.

But, Young says, more herbicide can lead to even stronger resistance and additional chemical runoff into the environment. So he and other researchers are pursuing robots as an alternative to dealing with the superweeds of the future.

"The computer would know what species it's dealing with, the appropriate weed-control tool, and you'd be done with it," Young said.

As Harvest Public Media has reported, putting robots in the field is not such a far-fetched idea. And some tractors are already robotlike: They can drive themselves with or without a person in the cab. But Young says autonomous weed-bots are still possibly a decade off.

In a series of seminars earlier this year at the University of Nebraska, Lincoln, researchers talked about the opportunities and challenges for weed-control robots. At this point, programming sensors to recognize the differences between crops and weeds is a major technical hurdle, but one that researchers are chipping away at. For instance, Young says, the smartphone app Leafsnap can identify dozens of different tree species. But that technology is not yet fast or smart enough to spot a weed in real time in the field.

"Things are kind of slow," Young says. "It's kind of crude and clumsy right now."

But herbicide resistance is a problem with no simple solutions, and Young believes if scientists can someday roll out a robot that works, the message to weeds will be that resistance is futile.