Accessibility links
How Did Our Brains Evolve To Equate Food With Love? : The Salt Until recently, our brains' way of connecting food with love and a sense of well-being was purely a good thing. But in a world where it's possible to feast every day, it can be a problem. 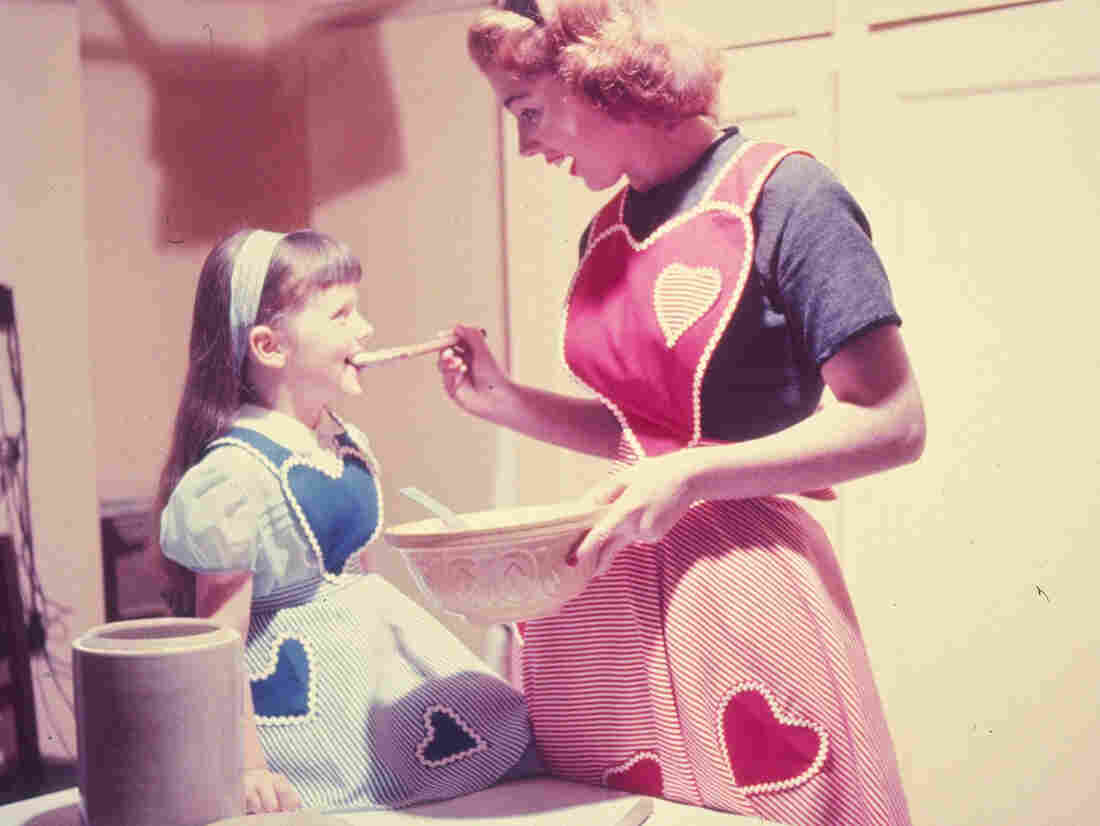 At some point in human evolution, our brains became wired to remember food events and the people associated with them. Hulton Archive/Getty Images hide caption 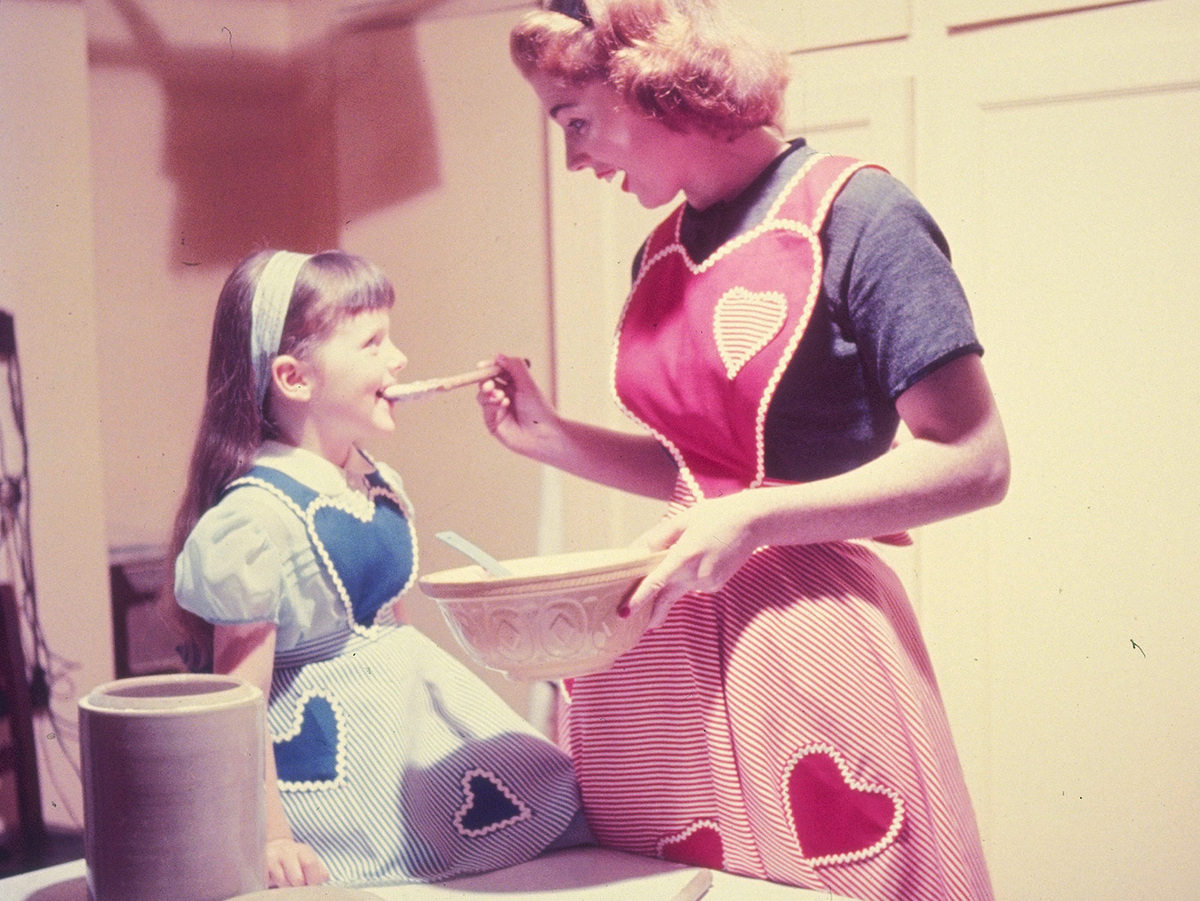 At some point in human evolution, our brains became wired to remember food events and the people associated with them.

If food is love, Americans must love their kids a lot. About one-third of children and adolescents in the U.S. are overweight or obese.

And our emotional response to food may be one of the reasons so many kids eat so much, according to a poll by NPR, the Robert Wood Johnson Foundation and the Harvard School of Public Health. The poll found that in more than a quarter of families, food is considered an important way to show affection.

That result is no surprise to Carol Cassie, who lives in Great Falls, Mont. For many years she ran a restaurant there called Mama Cassie's, where the front of each menu proclaimed, "Food is love."

"I wanted my customers to know as soon as they came into the restaurant that I was caring for them," says Cassie, who is also the author of Mama Cassie's "Food is Love!" Cookbook.

"People would get engaged at Mama Cassie's," Osswald says. "They would satisfy their pregnancy cravings on turtle cake from Mama Cassie's. They would bring their babies into Mama Cassie's later, and Carol would walk around the restaurant with them."

Cassie says she loved running the restaurant. But looking back, she says, there's something that concerns her. Some of her customers, including whole families, didn't seem to know when to stop.

"They'll have big plates of whatever, like a big pork sandwich that was just oozing with cheese and pulled pork and the meat sauce," Cassie says. And then, "they would have a piece of cheesecake afterward."

Love is probably at least part of the answer, scientists say, because of the way humans have evolved.

You can see some aspects of human food behavior in our animal ancestors, including marmoset and tamarin monkeys. These monkeys are like people in that fathers and siblings help raise the offspring, and all the adults make a big deal of providing food to youngsters in the family, says Adrian Jaeggi, a biological anthropologist at the University of California, Santa Barbara.

The older monkeys give a special call when they find a special treat, like insects that are "big and juicy and very nutritious," Jaeggi says. Then they adopt the "food offering posture" to present the young monkeys with the treat.

Chimpanzees, an animal ancestor that's even closer to humans, take the food-is-love concept to the next level. Chimps share food with individuals outside their own families.

The sharing often involves a precious food: meat. And a chimp who makes a kill doesn't share the meat with everyone, Jaeggi says, only the chimps in his group who are long-term allies. Sharing food appears to be a way of strengthening the alliance and ensuring future cooperation, he says, not unlike a business lunch. 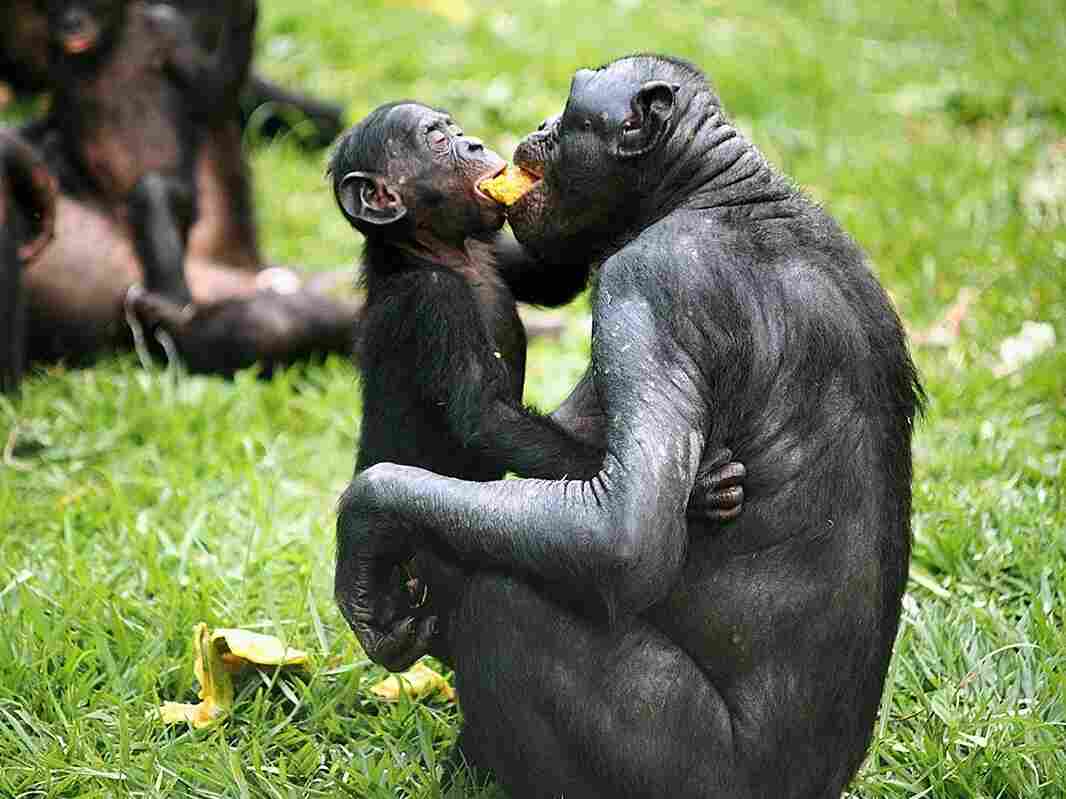 Bonobos share a piece of fruit at the Lola ya Bonobo sanctuary in the Democratic Republic of Congo. Jingzhi Tan/Duke University hide caption 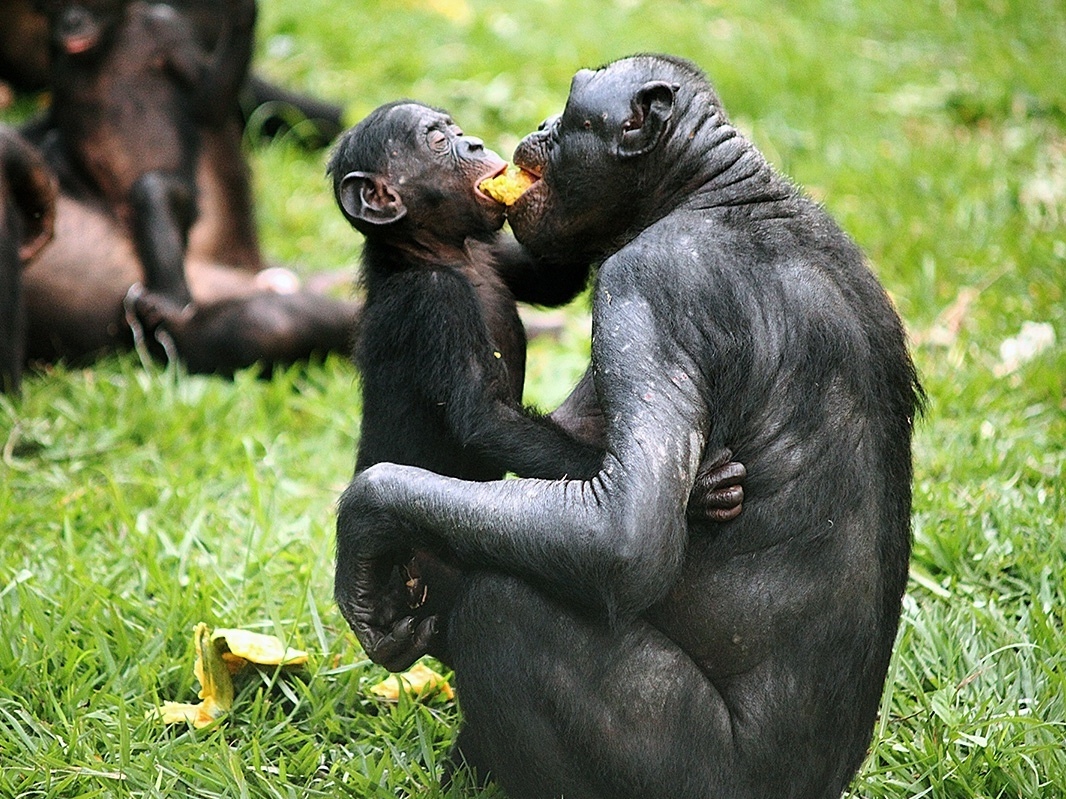 Bonobos share a piece of fruit at the Lola ya Bonobo sanctuary in the Democratic Republic of Congo.

Bonobos are another of our close relatives in the ape world. But unlike chimpanzees, bonobos live in groups run by females, and emphasize cooperation over competition. And like people, Bonobos use food to make new friends, not just to keep old ones.

Researchers showed this in a series of experiments done at the Lola Ya Bonobo sanctuary in the Democratic Republic of Congo.

The experiments involved a plate of food. "What we call it is the giant salad bowl, so we have apples, bananas, peanuts, papaya and cucumber all mixed together," says Jingzhi Tan, an evolutionary anthropologist at Duke University.

Researchers give the salad bowl to a bonobo in a locked enclosure. The bonobo has two neighbors in adjacent enclosures who don't have food. One of the neighbors is a bonobo they know, and one is a stranger.

Only the bonobo with the salad bowl can unlock the doors that would let a neighbor in. "So basically we create a situation that they can eat or they can share," Tan says.

What was most surprising, though, is that often the stranger who had just gotten access to the food would let the third bonobo in, and all three bonobos would eat together, Tan says.

And that brings us back to humans. It's not clear how long our human ancestors have been sharing food. But it appears that the social importance of food took a big leap forward about 1 million or 2 million years ago, says John Allen of the Brain and Creativity Institute at the University of Southern California. He's the author of The Omnivorous Mind, a book about how our relationship with food has evolved.

That's when humans began hunting really big animals, like mammoths, Allen says. The animals were so big that they couldn't be eaten by a small number of people. "That in effect provides a little arena for sharing and social exchange," Allen says.

In other words, the feast is born. Then when agriculture came along, we added harvest feasts, which eventually led to Thanksgiving.

And somewhere along the way, our brains became wired to remember these food events and the people associated with them, Allen says. It's probably no accident, he adds, that the digestive system produces hormones like insulin, leptin and ghrelin that act on the hippocampus, a part of the brain that plays a key role in memory.

Allen says the gut-brain connection probably exists because our ancestors were more likely to survive if they remembered clearly where they got their last good meal. And he says this same link between gut and brain is probably why he responds the way he does to a dish his mother used to make him called ketchup fried rice.

"Every time I make it I think of my mother," he says. Allen says he makes ketchup fried rice for his own children in hopes that they will always associate the dish with their father.

And if his kids really like that ketchup fried rice, another system in the brain will kick in to help create a lasting memory. It's the brain's dopamine system, which rewards us with feelings of pleasure.

The dopamine system becomes active in people when they look at someone they love or a favorite food, Allen says. So in our brains, at least, food really is connected to love and a sense of well-being.

And until recently that was probably a purely good thing, Allen says.

"There's never really been any incentive ever to limit calories," he says. "You know when you had a feast, when the food was there you ate it."

A lot of us still think that way. In the poll NPR did with the Robert Wood Johnson Foundation and the Harvard School of Public Health, about half of families said they treat celebrations as a time to take a break from concerns about overeating.

And in a world where it's possible to feast every day, that can be a problem. But it doesn't have to be, says Cassie, the cookbook author in Great Falls.

"You make that one day of celebration, or a weekend if you're going away for a weekend," she says. "But then you go back on Monday and you say, 'OK, now we have to get back to real life.' "