Accessibility links
Family Keeps Jewish Soulfood Alive At New York 'Appetizing' Store : The Salt When it opened, its name alone made it different, advertising the shared ownership of the family's daughters, instead of sons. Today, the shop, which specializes in smoked fish, continues to thrive. 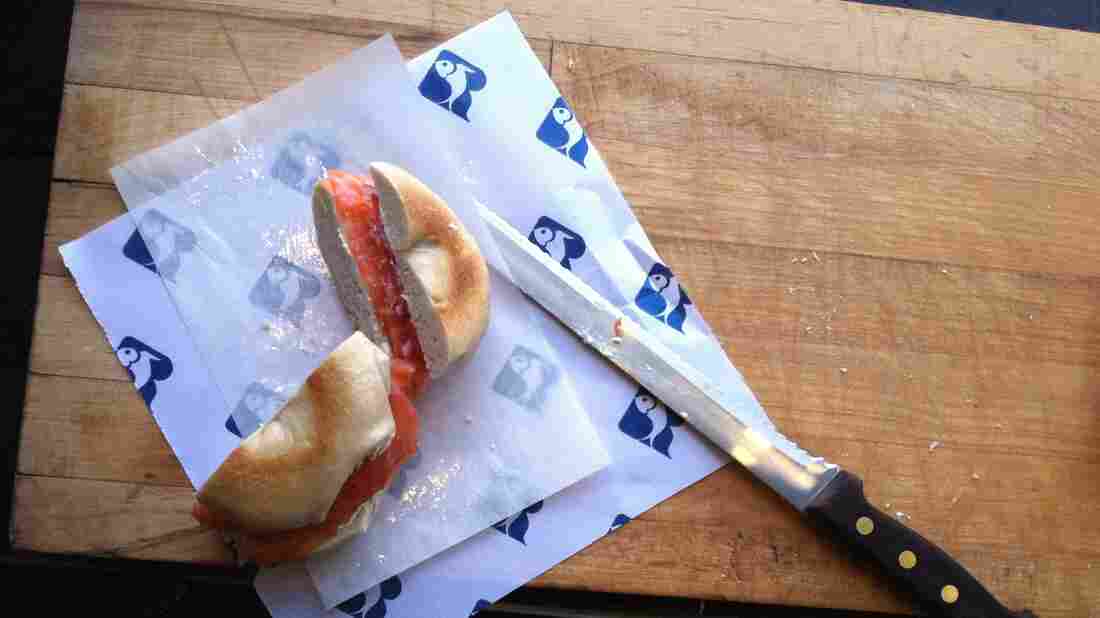 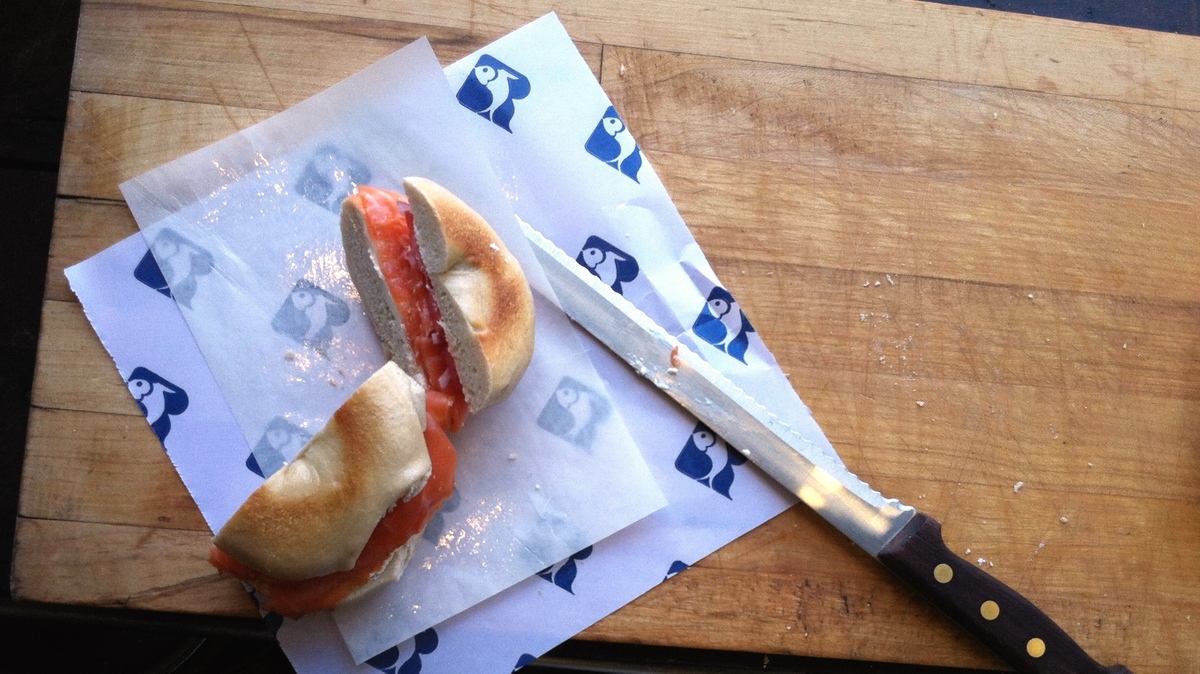 Russ and Daughters, which opened on the Lower East Side in 1914, specializes in smoked fish.

It's been more than 100 years since Joel Russ started peddling herring from a barrel on the streets of New York. 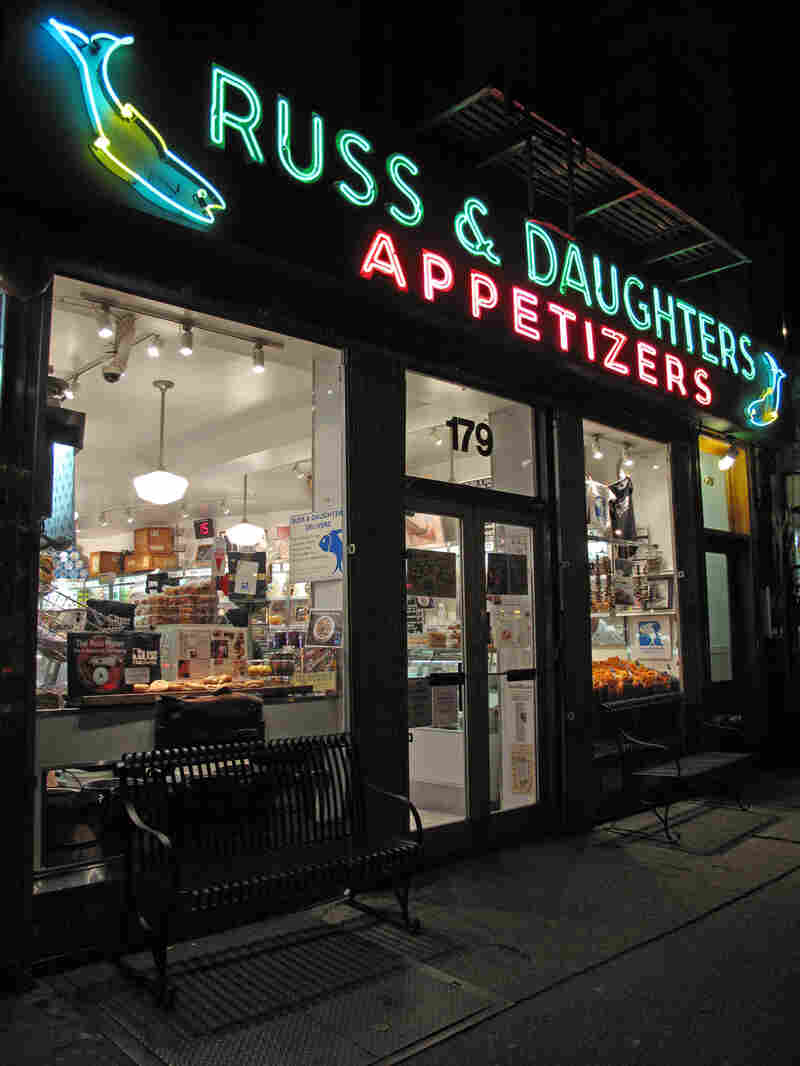 "The House the Herring Built" has served New York City for more than a century. Courtesy of Jen Snow, Russ And Daughters hide caption 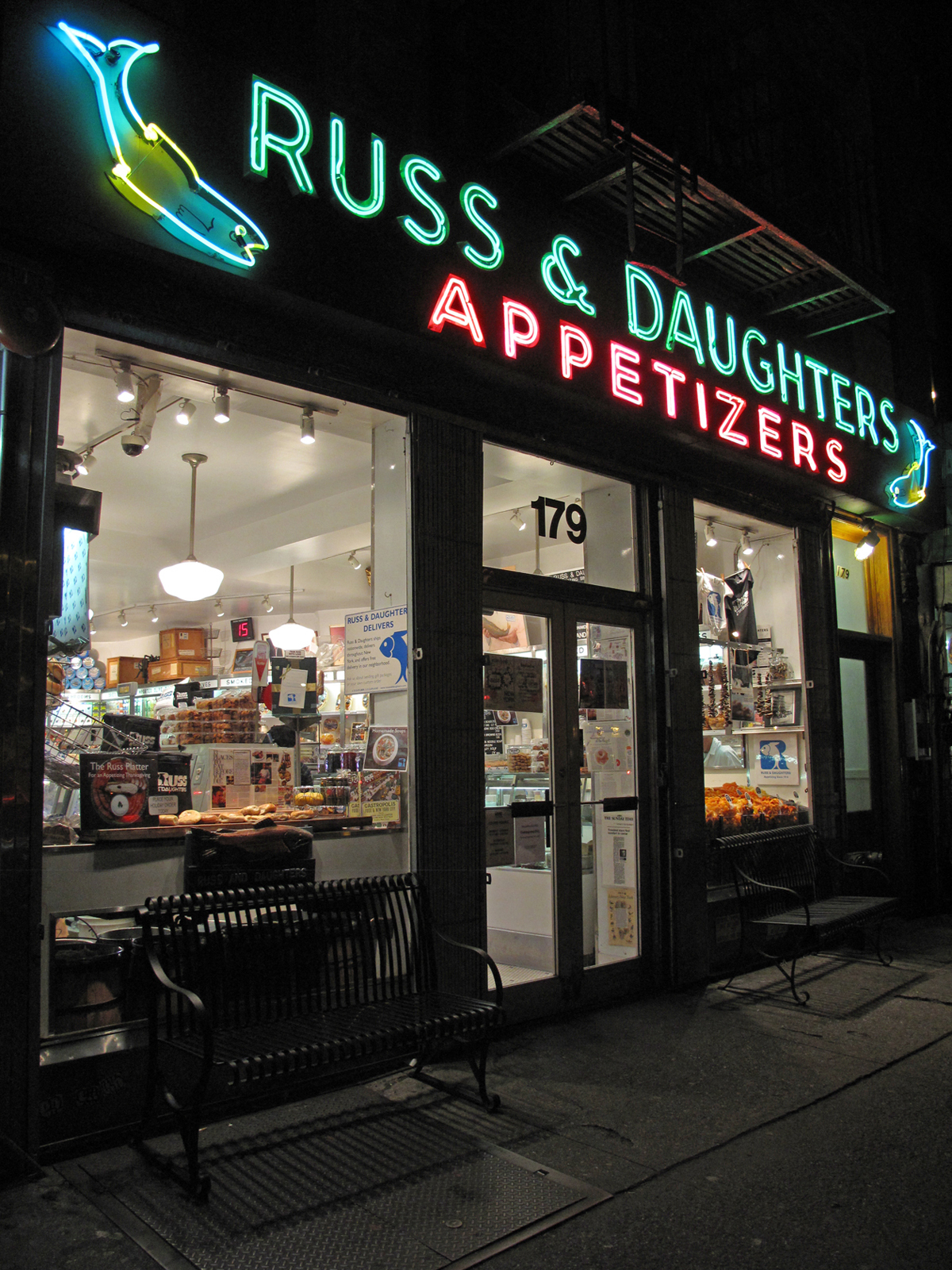 "The House the Herring Built" has served New York City for more than a century.

Today, the restaurant Russ and Daughters is a destination for fans of smoked salmon, whitefish and caviar, among other delicacies. Longtime owner Mark Russ Federman has written a memoir about the family business called Russ and Daughters: Reflections and Recipes from the House the Herring Built.

"An appetizing store has the mingling odors of salt, smoke, pickle and sweet," says Federman, who ran Russ and Daughters from 1978 until he retired three years ago. "So, all of that coming together makes for a unique sensory experience."

A century ago, the Lower East Side was packed with "appetizing" shops, where merchants would compete to satisfy the noshing needs of the neighborhood's Jewish clientele: pickled herring, smoked whitefish, sable and salmon, bagels and bialys, along with dried fruit, chocolate and candy.

Selling fish is in Federman's blood. His grandfather Joel Russ immigrated to New York from what's now southeastern Poland and opened the store in 1914. Russ didn't have any sons — but he did have three daughters. And Federman says he put them to work behind the counter.

"Down here, there were 20, 30 appetizing stores. And a lot of them had a sign over the door that said, 'Saperstein and Son,' 'Cohen and Son,' whatever, and sons. Sons. Nobody had, 'and daughters,' " Federman says. "So, he put a sign that said Russ and Daughters. That made him unique."

Federman says Hattie, Ida and Anne helped the business in other ways, too. 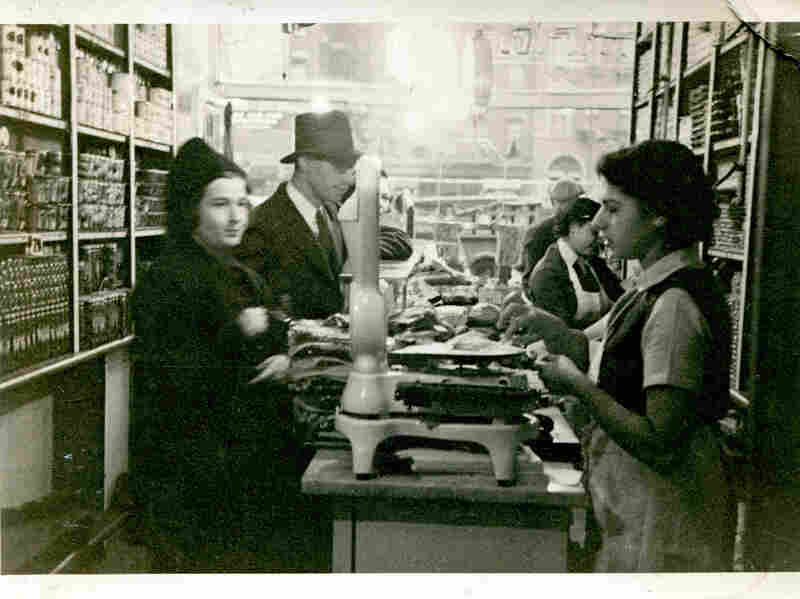 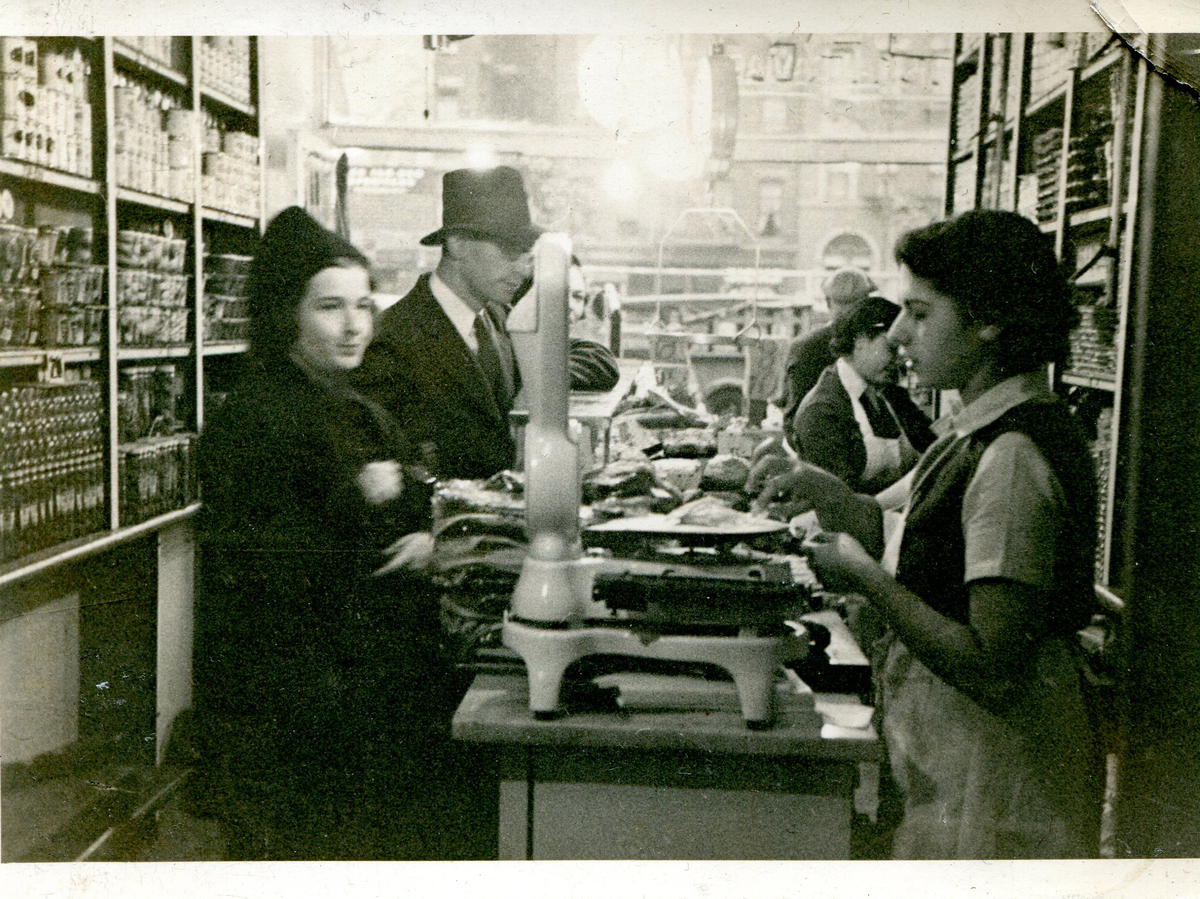 Courtesy of Russ And Daughters

"These pretty young girls would be fishing herrings out of barrels, and slicing lox, and charming and disarming the toughest of New York's customers," he says. "And these were tough customers."

Unlike his aunts and mother, Mark Russ Federman did have a choice about working in the family business. Federman went to law school. He got a job at an uptown law firm — and hated it.

In 1978, Federman came back to run the family business. And he was shocked at how hard the job was.

Today, the men and women behind the counter aren't all Russes. Some of them aren't even — heaven forbid — Jewish. Herman Vargas has been working here for 32 years, ever since he arrived in New York from the Dominican Republic.

"There is something called bashert in Yiddish, which is like destiny. Now I can say [it is] so," Vargas says of his chosen profession. "But when I first came in no, no way."

Russ and Daughters survived long enough to be rediscovered by foodies and food writers. Now, Mark Federman has handed the business over to a fourth generation of Russes — his nephew, Josh Russ Tupper, and his daughter, Niki Russ Federman. They've tried to bring the store into the 21st century gently, with innovations like ordering over the Internet. Though not all of their customers are interested.

"People will come back at me almost as if I've offended them," says Niki Federman. "One person even said, 'Don't take my joy away from me. I have to come. I have to talk to Jose. He's my favorite counter guy. I've been seeing him for 30 years.'"

All the Russes acknowledge that the success of the store is about more than the quality of its fish. That helps, says Federman. 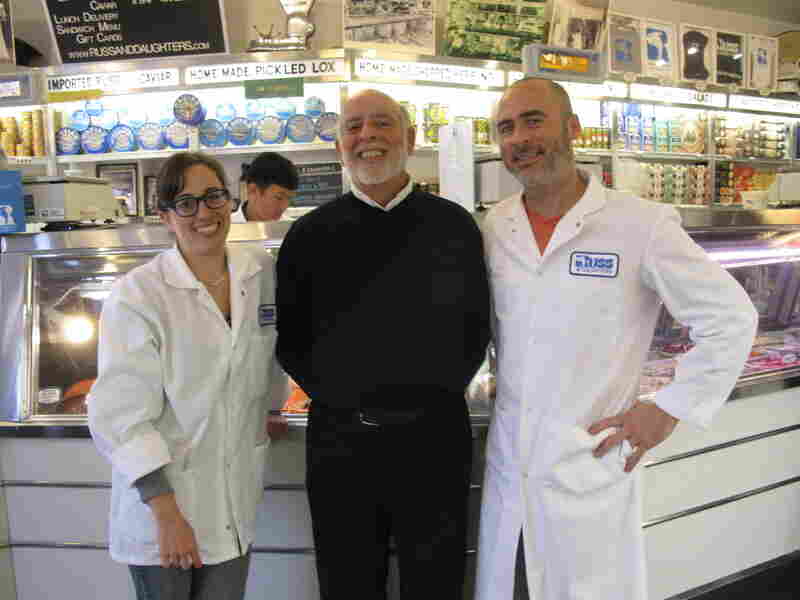 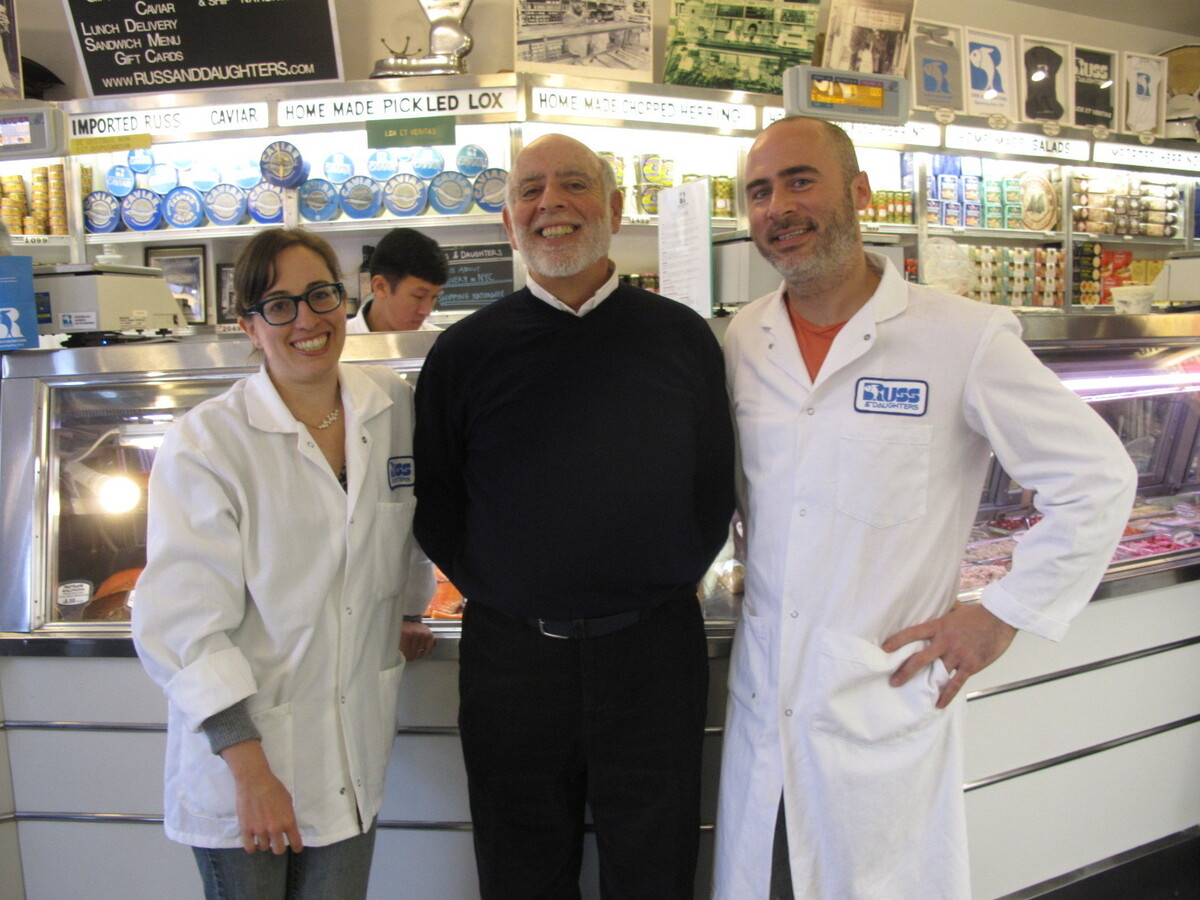 Mark Russ Federman (center) stands with the next generation of Russ and Daughters owners: his daughter Nikki and his nephew Josh Russ Tupper.

But even after writing a book about the store, Federman says he's not quite sure why Russ and Daughters is still in business when so many appetizing stores aren't.

"This store has a soul — a neshama, as we say in Hebrew," says Federman. "Some of the Russes get that. And that's what keeps us doing this kind of thing."

Even in retirement, Mark Russ Federman hasn't lost his enthusiasm for the store's products. His lunch order? Smoked salmon and sable on a bialy with cream cheese and tomato. "To me, it's heaven," he says. "If somebody asks me — and they have, actually — what's your dying meal, this is it."