Accessibility links
In Kazakhstan, No Horror At Horse Meat : The Salt Horse meat is always on the menu in Kazakhstan. It's considered a delicious treat with deep history. 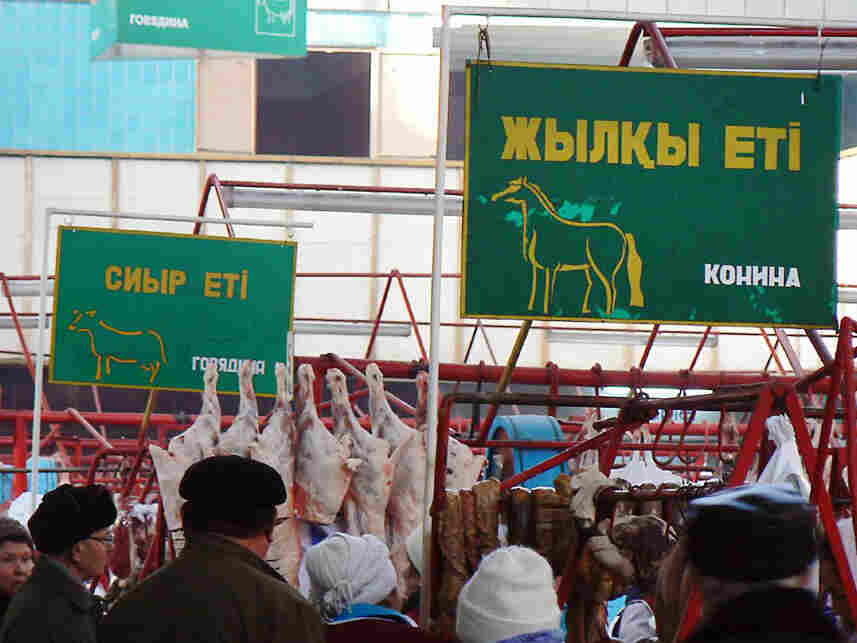 Signs advertise the type of meat sold in each section of the Green Market in Almaty, Kazakhstan. Sly06/Flickr hide caption 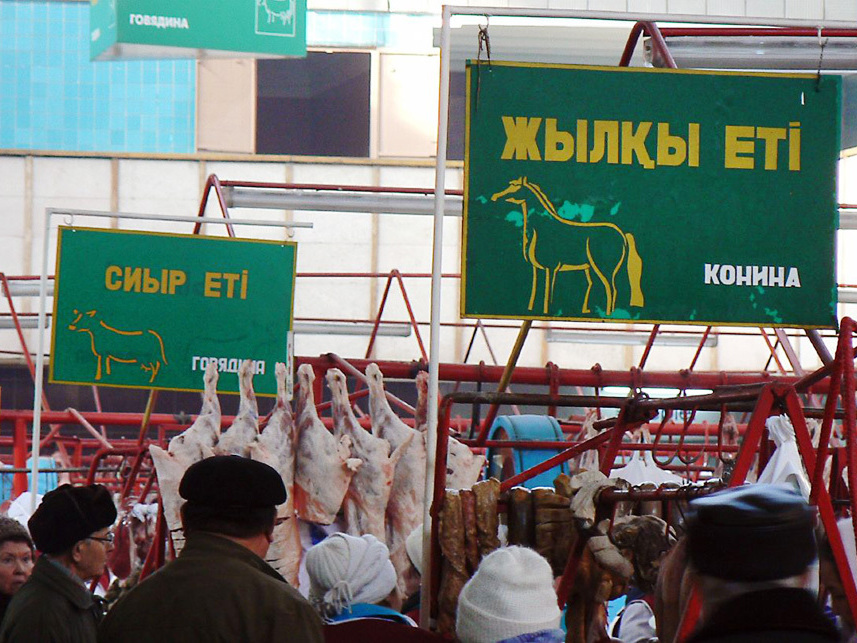 Signs advertise the type of meat sold in each section of the Green Market in Almaty, Kazakhstan.

Though the thought of horse meat in British lasagna or Ikea meatballs may be stomach-churning to some people, in some cultures the practice of eating horse meat is not just acceptable, it's a treat. NPR's Peter Kenyon just returned from the Central Asian republic of Kazakhstan and checked out the meat market at the Green Bazaar in Almaty. He sent back this postcard.

In a cavernous hall, I found a long counter dripping with steaks, chops and ribs. A sign at the end of each aisle advertised the animal on display: lamb, cow, goat and, toward the back, horse.

Those aisles were attracting plenty of customers, despite the fact that horse meat costs more than beef. That's a far different situation than in Europe, where scandal erupted over cheaper horse meat substituted for more expensive beef.

In the Green Baazar, horse breast and ribs are very popular, as is a fatty part of the neck, according to Farida, one of the knife-wielding women working there.

But the ultimate delicacy is kazy, a boiled horse sausage served on special occasions and to honored guests. It's so essential to Kazah cuisine that the country's Olympic team begged to be allowed to bring it to London for the 2012 games.

When I asked Farida about the horse meat scandal in Europe, she made it clear that she's far too polite to make fun of another country's gastronomic foibles.

"The British people honor the horse, and they don't eat it. They haven't got the tradition," she said. "Here in Kazakhstan, our ancestors ate horses, and it is deeply connected to our identity."

Those connections are centuries deep. The Kazakhs' forebears rode across the steppes with Genghis Khan in the 13th century. The army moved with alarming speed, thanks to its sturdy horses, with three or four per warrior. Those horses also provided milk, blood and eventually meat to fuel the army.

In the market, 60-year-old Nurseit watched as fistfuls of crushed garlic were mixed with horse breast and salt, and stuffed into sausage casings to make kazy. Nurseit laughed as he remembered bringing some kazy to the United States for his son, a diplomat. At the airport, the sniffer tog twitched and turned his way, but he managed to deliver the prize safely.

After the market, I decided to try it myself, at the Seven Treasures restaurant. I found it delicious, not unlike very tender venison.

But that's not the only horse product on the menu. My translator, Aibar, dared me to try fermented mare's milk, which is known to back quite a kick.

"It's very good, actually," Aibar said. "There shouldn't be that much alcohol in it, probably about 10, nine degrees."

The milk is sour, smoky and gamy all at once.

Actually, through, I feel a sudden urge to conquer the steppes. Maybe after one more bite of this delicious sausage. What is it again?