Accessibility links
We Like 'Em Big And Juicy: How Our Table Grapes Got So Fat : The Salt Girdles and hormone therapy for grapes? California farmers go to great lengths to plump and firm up grapes as much as possible. But don't worry: None of these techniques hurts the grapes or those who love them.

We Like 'Em Big And Juicy: How Our Table Grapes Got So Fat

We Like 'Em Big And Juicy: How Our Table Grapes Got So Fat

It's no secret that many Americans have a fetish for big food. Whether it's a triple-decker cheeseburger or a 128-ounce Big Gulp, some portions in the U.S. have gotten freakishly large.

But not all of our supersizing is unhealthy.

Americans also like big fruit — especially grapes. And California farmers go to great lengths to get grapes as fat and firm as possible, including spraying them with hormones and even scraping off a chunk of the grapevine's trunk.

Take, for instance, the classic Thompson seedless. When left to its own devices, the vine produces green grapes that are quite small: 1 to 2 grams each, or about the weight of a dime, says viticulturist Matthew Fidelibus of the University of California, Davis. 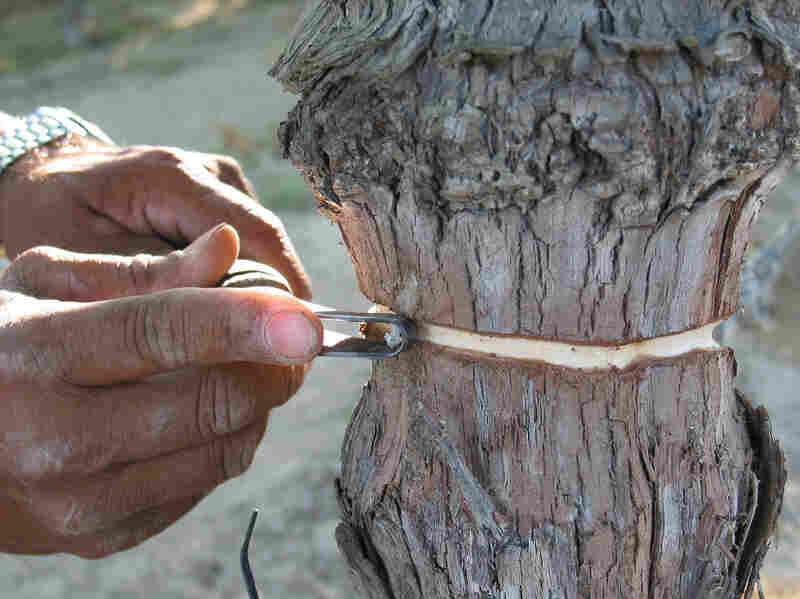 Put a "girdle" on that vine: By scraping off a small section of the grapevine's trunk, a farmer in California hopes to fatten up the fruit growing at the top. Courtesy of California Viticulure hide caption 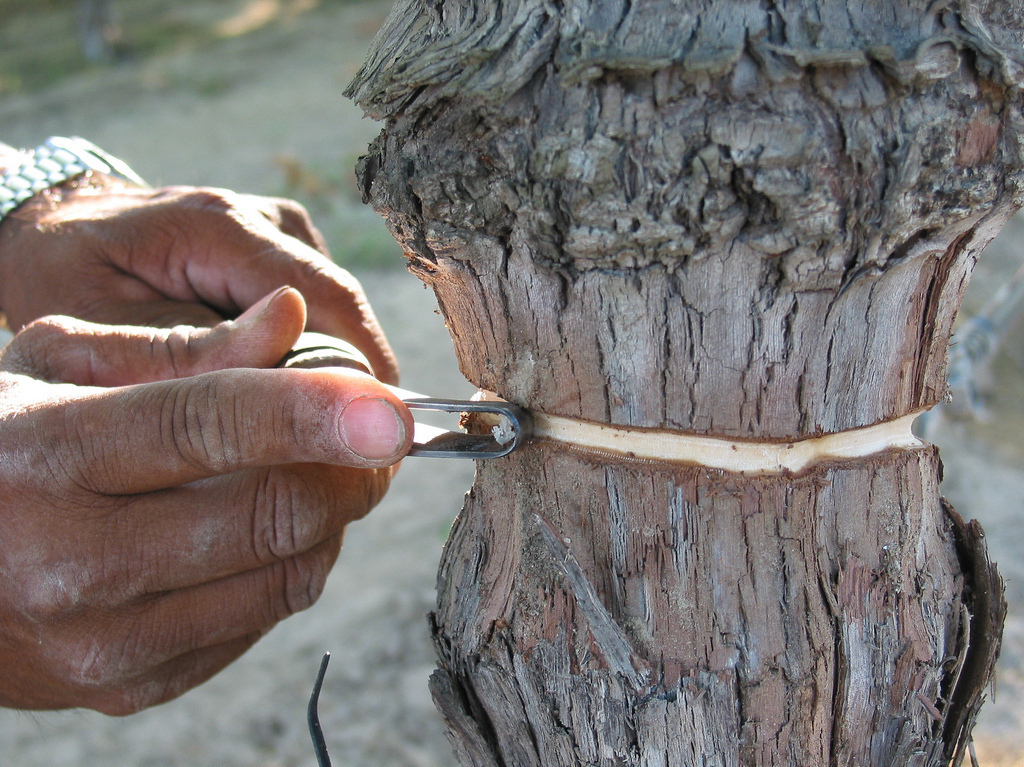 Put a "girdle" on that vine: By scraping off a small section of the grapevine's trunk, a farmer in California hopes to fatten up the fruit growing at the top.

But with the help of a few horticultural tricks, the berries plump up nearly fivefold. "They also get firmer and more cylindrical," Fidelibus says. That means a higher price per pound and greater profits for farmers.

So how do farmers get that extra junk in the grape's trunk?

Many use an ancient — and slightly barbaric — practice called girdling, which forces the plant to put all its food and energy into making fruit.

Plants have two types of pipes in their stems: the xylem and the phloem. The xylem pumps water to the leaves from the roots, while the phloem sends food from the leaves back down to the roots.

If you cut off the phloem's flow, all the sugar and energy stays up top, where the fruit is growing. So the berries get plumper.

That's exactly how girdling works. Farmers strip off a section of the trunk's phloem, stopping sugars from moving down to the roots. The phloem sits right underneath the bark, so farmers can easily remove it without hurting the xylem deeper inside the stem.

They call this girdling because — just like the formfitting garment — the cut must encircle the entire trunk for it to work.

The practice goes all the way back to the ancient Greeks, when the "father of botany," Theophrastus, wrote about "girdling stems," shoving metal pegs into pear trees and other ways of "punishing plants" to quicken fruit production.

Shakespeare even mentions girdling in his play Richard II: 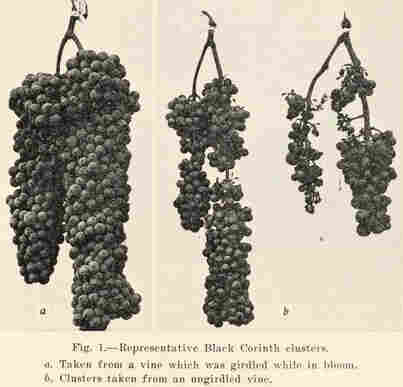 Do wound the bar, the skin of our fruit-trees,

Lest being over-proud in sap and blood,

With too much riches it confound itself

The vine heals itself after a few weeks, Fidelibus tells The Salt. So it doesn't hurt the plant's health. And although girdling is "very labor intensive," Fidelibus says, farmers get the return on their investment. "It can increase berry size 10 to 30 percent."

To pump up the fruit even further, farmers turn to a more common trick: hormone therapy.

Just as sex hormones are used to fatten up beef cattle, a plant hormone called gibberellic acid can beef up berries.

Grapes are so distantly related to humans that their hormones don't raise concerns about how they might affect us, Fidelibus says.

But these hormones have a big impact on growing fruit. Farmers can even control the shape of the berries. Gibberellic acid makes the grapes long and cylindrical, while other chemicals can give them a rounder physique.

California classifies plant hormones as pesticides, but Fidelibus says that's just a legal definition. "It's not at all toxic to people," he tells The Salt. "Gibberellic acid is widely used in agriculture, and seeds make it naturally. So people would be eating it anyway."

Fidelibus also points out that some seeded grapes, like Red Globes, naturally have big fruit. And the United States Department of Agriculture has been working for decades to breed low-maintenance seedless varieties.

A few years ago, the Autumn King variety was released, putting hormone-treated Thompson seedless to shame. Fidelibus says the King can produce round, plump grapes weighing nearly 10 grams each — no girdles required.

Even Sir Mix-a-Lot would approve of that fruit.