Accessibility links
In A Grain Of Golden Rice, A World Of Controversy Over GMO Foods : The Salt A rice enriched with beta-carotene promises to boost the health of poor children around the world. But critics say golden rice is also a clever PR move for a biotech industry driven by profits, not humanitarianism. 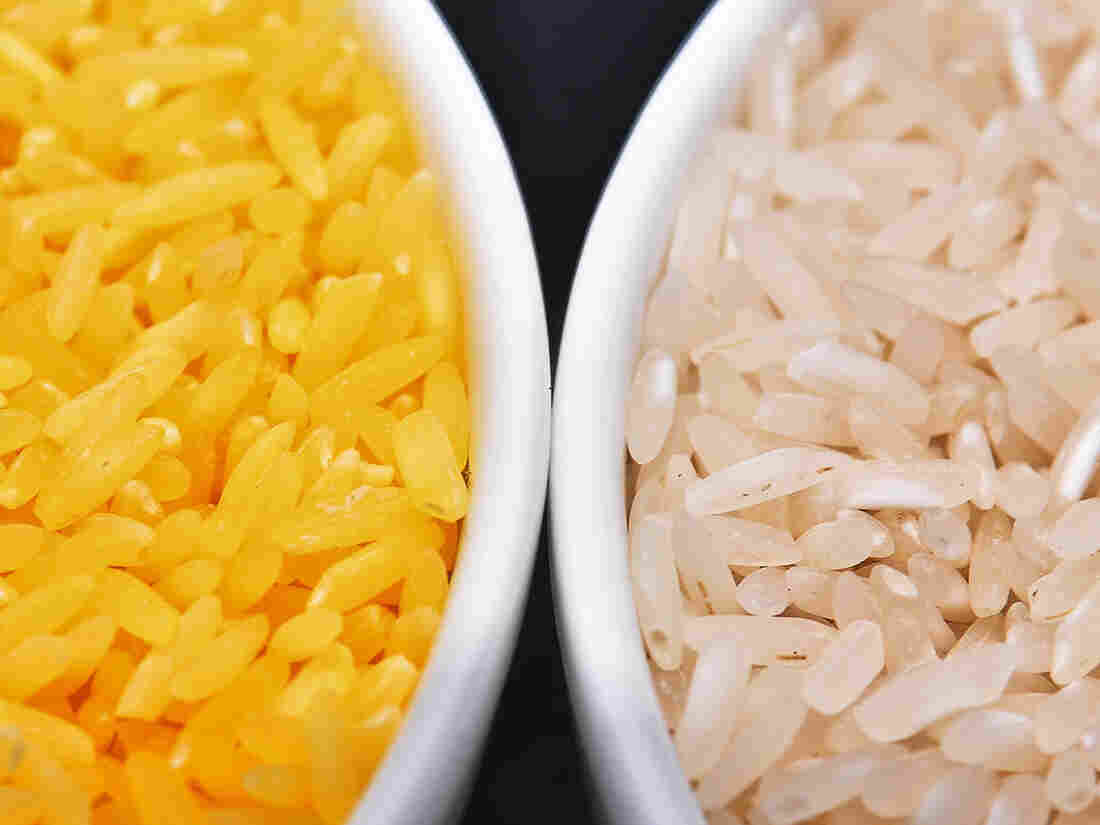 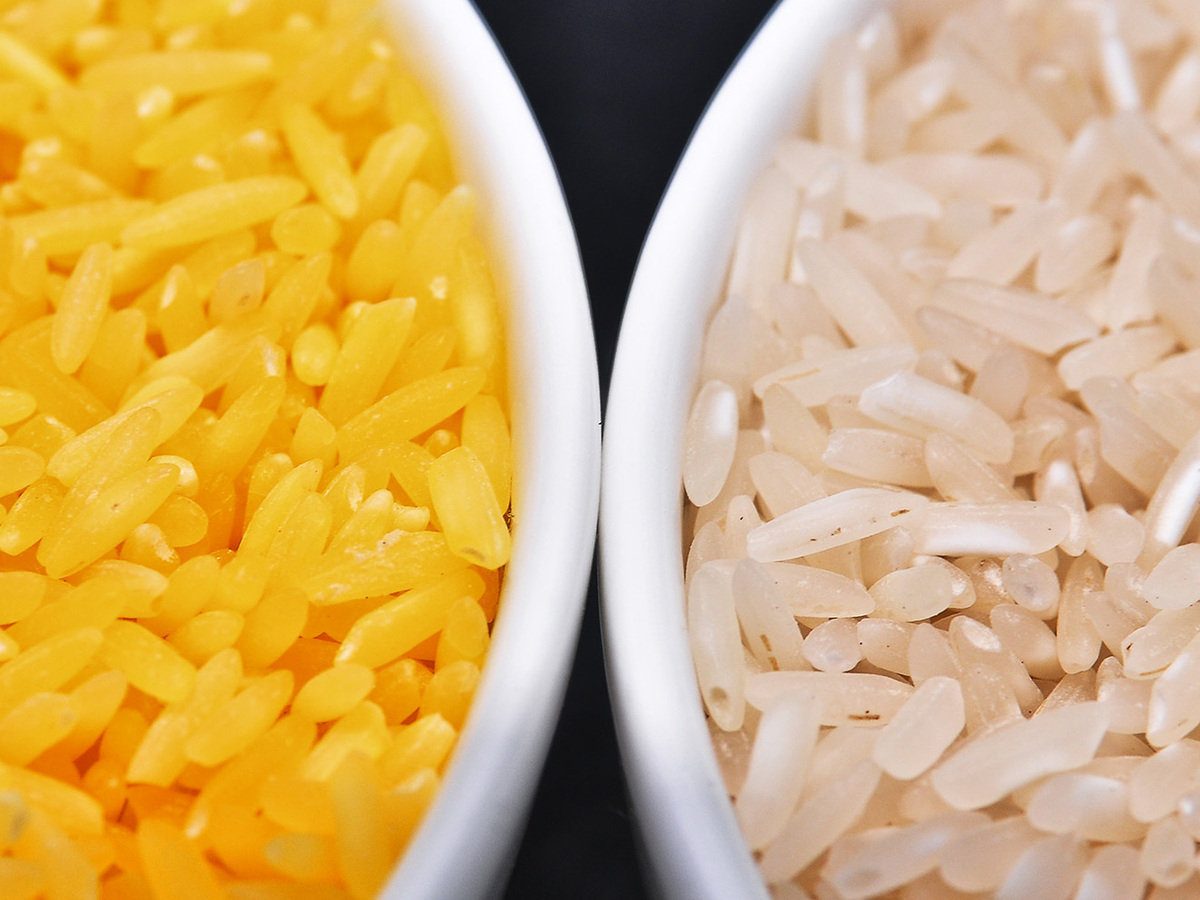 Genetically modified to be enriched with beta-carotene, golden rice grains (left) are a deep yellow. At right, white rice grains.

There's a kind of rice growing in some test plots in the Philippines that's unlike any rice ever seen before. It's yellow. Its backers call it "golden rice." It's been genetically modified so that it contains beta-carotene, the source of vitamin A.

Millions of people in Asia and Africa don't get enough of this vital nutrient, so this rice has become the symbol of an idea: that genetically engineered crops can be a tool to improve the lives of the poor.

It's a statement that rouses emotions and sets off fierce arguments. There's a raging, global debate about such crops.

But before we get to that debate, and the role that golden rice plays in it, let's travel back in time to golden rice's origins.

It began with a conversation in 1984.

The science of biotechnology was in its infancy at this point. There were no genetically engineered crops yet. Scientists were just figuring out how to find genes and move them between different organisms.

Some people at the Rockefeller Foundation thought that these techniques might be useful for giving farmers in poor countries a bigger harvest.

So they set up a meeting at the International Rice Research Institute (IRRI), in the Philippines, to talk about this.

Gary Toenniessen, who was in charge of the foundation's biotechnology program at the time, says that a lot of people at this meeting were very skeptical about biotechnology. They were plant breeders, masters of the traditional way to improve crops.

One evening, after the formal sessions, "a group of these breeders were sitting around at the guesthouse at IRRI, having a beer or two," says Toenniessen. After listening to their skepticism for a while, Toenniessen spoke up. If this technology did actually pan out, he said, and you could put any gene you wanted into rice, which one would you pick? "What's your favorite gene?"

They went around the room. Breeders talked about genes for resisting disease or surviving droughts.

They came to a breeder named Peter Jennings, a legendary figure in these circles. He'd created perhaps the most famous variety of rice in history, called IR 8, which launched the so-called Green Revolution in rice-growing countries of Asia in the 1960s.

"Yellow endosperm," said Jennings. (The endosperm of a grain of rice or wheat is the main part that's eaten.)

"That kind of took everybody by surprise. It certainly took me by surprise. So I said, 'Why?' " Toenniessen recalls.

Jennings explained that the color yellow signals the presence of beta-carotene — the source of vitamin A. Yellow kinds of corn or sorghum exist naturally, and for years, Jennings said, he had been looking for similar varieties of rice. Regular white rice doesn't provide this vital nutrient, and it's a big problem.

"When children are weaned, they're often weaned on a rice gruel. And if they don't get any beta-carotene or vitamin A during that period, they can be harmed for the rest of their lives," says Toenniessen.

Toenniessen was persuaded, and the Rockefeller Foundation started a program aimed at creating, through technology, what Jennings had not been able to find in nature.

A global network of scientists at nonprofit research institutes started working on the problem.

The first real breakthrough came in 1999. Scientists in Switzerland inserted two genes into rice that switched on production of beta-carotene. A few years later, other researchers created an even better version.

A single bowl of this new golden rice can supply 60 percent of a child's daily requirement of vitamin A.

"It's a great product. And it's beautiful! It looks just like saffron rice," says Toenniessen, who's now a managing director at the Rockefeller Foundation. 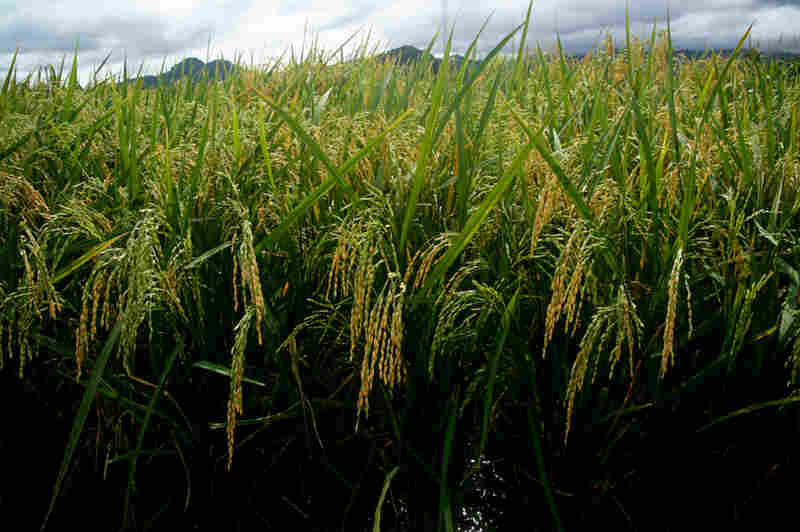 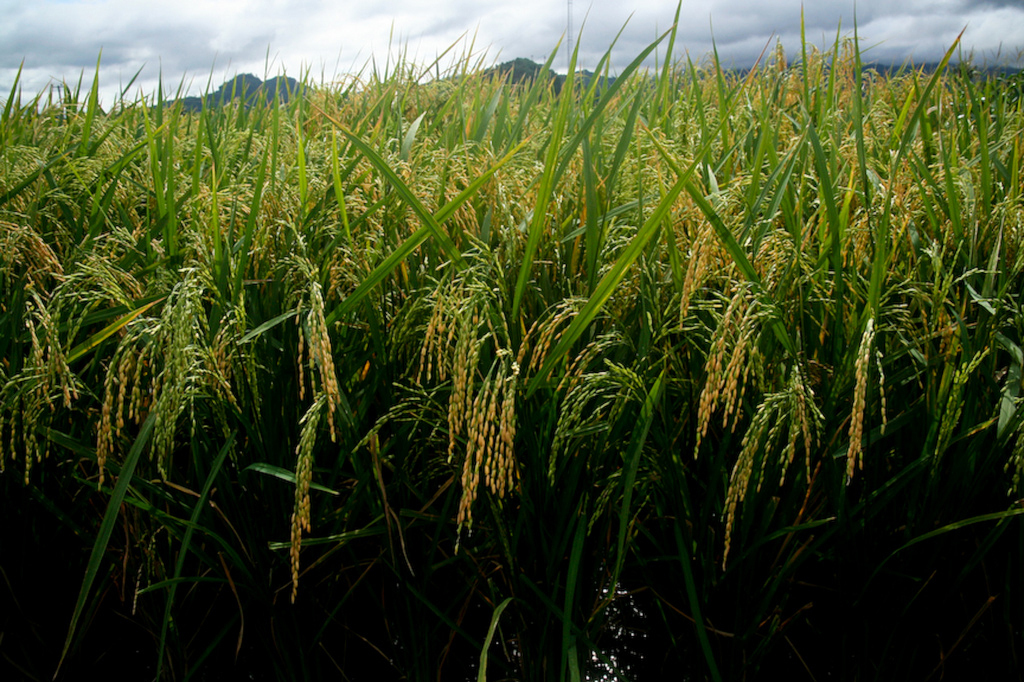 Golden rice plants at a confined field trial in 2010.

Others, though, don't find it beautiful at all.

For instance, consider what happened just a few months ago. Some U.S.-funded researchers published the results of a nutritional study showing that people's bodies easily absorb the beta-carotene in golden rice. They'd carried out that study among children in China.

The result seemed like great news. But the environmental group Greenpeace immediately called it a scandal.

"People are angry, really furious about these tests, using Chinese children as guinea pigs," says Wang Jing, a campaigner for Greenpeace in China.

The Chinese government reacted quickly. It punished three Chinese co-authors of the study, removing them from their jobs.

In a report on the case, Chinese authorities say that the researchers didn't get all the approvals they needed before carrying out the study. Also, the researchers told the children, and their parents, that this was a special kind of rice high in beta-carotene, but they didn't always say it was genetically modified.

"They actually hid the fact that golden rice is a genetically modified crop," says Wang.

For some people, this makes all the difference in the world.

This is where golden rice gets caught up in the bigger argument over genetically engineered crops — specifically, the argument over who benefits from them.

Neth Daño, who works in the Philippines for the ETC Group, an advocate on behalf of small farmers, says the main purpose of genetically modifying crops has not been to help people; it's been driven by profit.

"A handful of corporations in developing countries has reaped billions in profits selling genetically modified seeds and proprietary herbicides," she says. Yet those companies have always claimed that this technology would benefit the poor. "The poor have always been at the center of each and every assertion about the importance of genetically modified organisms to mankind."

So this is the real significance of golden rice, she says. It gives biotech companies a chance to say, "See, biotechnology is good for the poor!"

"Some proponents are already announcing that the debate is over, that the golden rice product is the clincher."

Don't misunderstand me, Daño says: Golden rice is not purely public relations. It is, indeed, supposed to help malnourished people — although she doesn't think it's a very good way to help. She thinks it will be more expensive and less effective than traditional nutrition programs.

This rice is mainly going to help the image of biotechnology, she says.

This mixture of motives — helping people and promoting biotechnology — also shows up in the biography of the man who's now leading the golden rice effort. 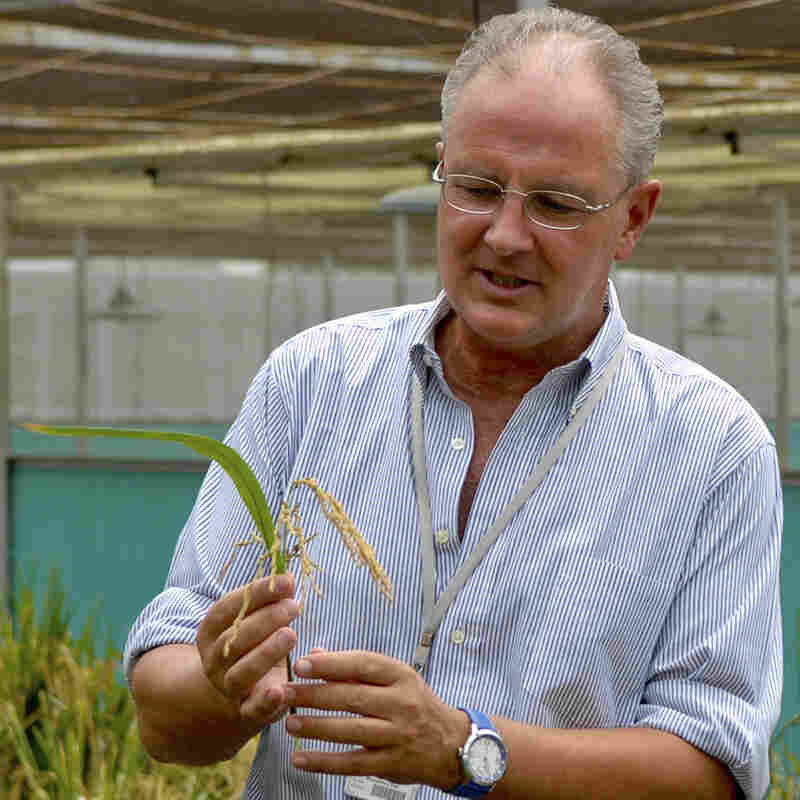 Gerard Barry, a native of Ireland, spent more than 20 years in St. Louis working for Monsanto, the company that pioneered genetically engineered crops.

He's listed as first inventor on some of Monsanto's most valuable patents. He found the gene that made crops immune to the weedkiller Roundup. That gene is now in soybeans, corn and cotton grown on hundreds of millions of acres.

But along the way, Barry also got interested in rice. "It was very exciting. It was probably my favorite crop to work on," he says. "Because you got to meet really passionate people. Rice is something that's vital to large numbers of people. I mean, a couple of billion people eat it."

Ten years ago, Barry left the corporate world and moved to the nonprofit International Rice Research Institute in the Philippines — the place where the idea of golden rice was born.

His job is now to shepherd it down the home stretch to the finish line.

Part of the job involves old-fashioned plant breeding to transfer the beta-carotene genes into rice varieties that farmers like to grow.

But before farmers can get their hands on golden rice, government regulators in each country need to agree that it's safe.

Later this year, the network of golden rice researchers will apply for approval in the Philippines. After that, they'll do the same in Bangladesh.

Yet that's only the first step. They'll have to roll out a marketing campaign on behalf of golden rice, and the campaign has to reach the poorest people in the most remote villages.

"Golden rice will be good for everybody, but some people need it more," Barry says. "Our job is to make sure that [those] people have access to it, understand the value of it, and ask for it."

This will be the final test of that 30-year-old brainstorm — the idea that genetically altered rice actually could be a cheap, self-multiplying source of this vital nutrient.