Gluten Goodbye: One-Third Of Americans Say They're Trying To Shun It

Gluten Goodbye: One-Third Of Americans Say They're Trying To Shun It 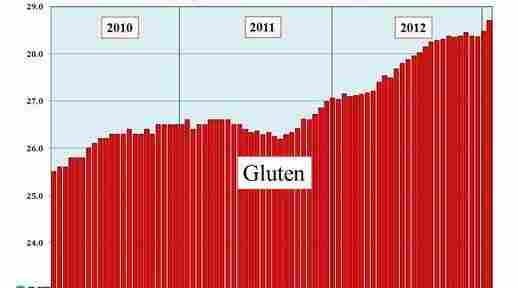 Sure, we know that gluten-free is the Jennifer Lawrence of food trends. But we were still startled to hear that one-third of Americans say they're trying to avoid gluten. Really?

So we checked in with Harry Balzer, the food numbers king for consumer survey firm NPD Group. He said that not only is that number for real, but he thinks it's a little low.

"Around the beginning of 2012 this thing starts to rise, and it has yet to peak," Balzer says. "Right now 29 percent of the adult population says, 'I'd like to cut back or avoid gluten completely.' "

That's interesting, since less than 1 percent of people have celiac disease, according to the National Institutes of Health. Those people can't tolerate gluten, a protein in wheat, rye and barley. For them, avoiding gluten is the only way to avoid painful gastrointestinal problems and other symptoms caused by this autoimmune disorder.

But if the other 28 percent of people don't have celiac, why are they trying to shun gluten?

It could be that they're sensitive to gluten. As we've previously reported, a small number of studies have found that people who don't have celiac can still have difficulties digesting gluten.

Or they could just think it sounds healthful.

After all, while not everyone may feel they have the health issues to justify cutting back on salt or fat, Balzer notes, "everybody has digestive issues — everybody."