Accessibility links
From Pets To Plates: Why More People Are Eating Guinea Pigs : The Salt Guinea pigs are popular pets in the U.S., but in parts of South America, they're a delicacy. Some environmental and humanitarian groups are making a real push to encourage guinea pig farming as an eco-friendly alternative to beef. And the animals are also showing up in more U.S. restaurants. 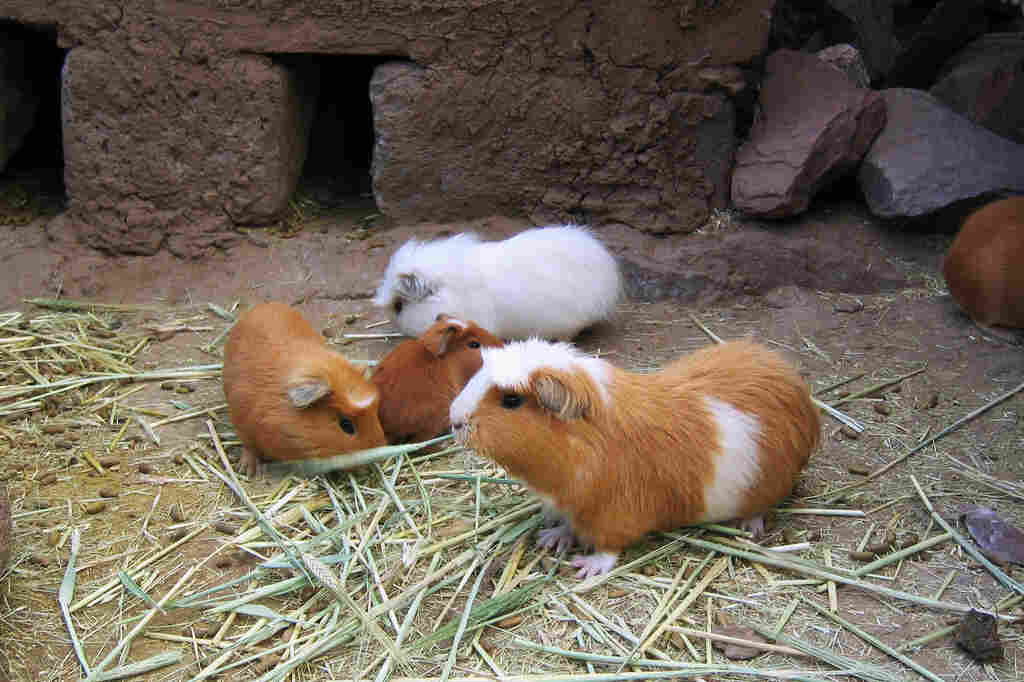 Guinea pigs at a farm for the animals in Puno, Peru, where they're considered a delicacy. Phil Whitehouse/via Flickr hide caption 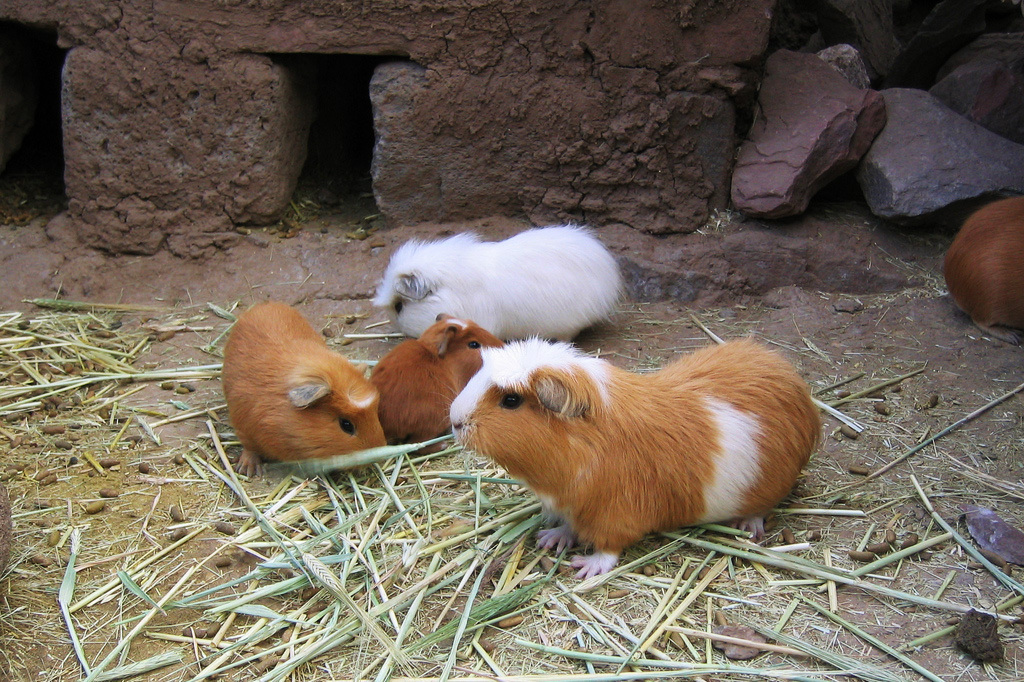 Guinea pigs at a farm for the animals in Puno, Peru, where they're considered a delicacy.

You may best know the guinea pig as a nervous little pet that lives in a cage and eats alfalfa pellets.

Now, the rodents are increasingly showing up on plates in the United States.

South American restaurants on both coasts seem to be pushing the trend, answering to demand mostly from Andean expats for what is considered a fine and valuable food in Ecuador, Peru and Colombia. Middle-class foodies with a taste for exotic delicacies are also ordering, photographing and blogging about guinea pig. The animals — called cuyes in Spanish — are usually cooked whole, often grilled, sometimes deep fried. Many diners eat every last morsel, literally from head to toe. 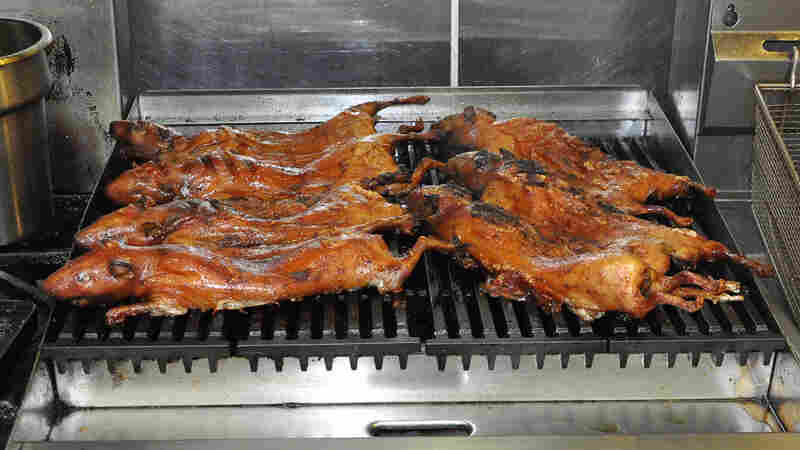 Matt Miller, an Idaho-based science writer with The Nature Conservancy, says rodents and other small livestock represent a low-impact meat alternative to carbon-costly beef. Miller, who is writing a book about the ecological benefits of eating unconventional meats, visited Colombia several years ago. At the time, he says, conservation groups were expressing concern about local ranchers clearing forest to provide pasture for their cattle — activity that was causing erosion and water pollution.

"They were encouraging people to switch from cattle to guinea pigs," Miller says. "Guinea pigs don't require the land that cattle do. They can be kept in backyards, or in your home. They're docile and easy to raise."

The Little Rock-based humanitarian organization Heifer International, which assists communities in enhancing their economies and streamlining local food production, is also promoting guinea pig husbandry in Peru, Ecuador and Guatemala. Jason Woods, the nonprofit's Americas regional program assistant, says guinea pigs — which he says usually weigh no more than 2 pounds — are twice as efficient as cows at turning food, like hay and compost scraps, into meat: To render a pound of meat, a cow, he explains, may require 8 pounds of feed. A guinea pig only needs 4.

To help start a home guinea pig farm, Heifer International typically supplies a family with one male and seven females. In just months, such a collection may have doubled in size. Woods says a guinea pig herd consisting of two males and 20 females can sustain itself while providing meat for a family of six.

In the United States, most guinea pigs intended for human consumption come from Peru as whole, frozen, hairless rodents in plastic bags.

The Salt contacted several federal regulatory agencies, including USDA and Fish and Wildlife, but none seemed to track guinea pig imports. However, we spoke with the owners of two Peruvian food importers who said cuy consumption in the United States is certainly rising. Neither would speak on record, but each said they are now importing more guinea pigs than ever before.

At one company, in Connecticut, imports have nearly doubled since 2008 — from 600 guinea pigs per year then to more than 1,000 today.

Urubamba, a Peruvian restaurant in Queens, wasn't serving guinea pig at all eight years ago. Since then, demand has climbed every year, according to Carlos Atorga, who opened Urubamba in 1976.

Now, Urubamba customers can expect cuy on the menu about one weekend each month. The animals go for $17 a plate, each cuy splayed down the middle like a lobster and served with a front leg and a back, an eye, an ear and a nostril.

In San Francisco, Diego Oka, a native of Peru and the executive chef of La Mar Cebicheria, serves imported Peruvian cuy every summer around Peru's July 28 Independence Day. Oka marinates and deep-fries his guinea pigs for a dish called cuy chactado. He says the nose, ears and fingery little hands are the best bites of all — but Oka removes the animals' extremities to avoid offending sensitive diners.

In Los Angeles, Helen Springut, co-founder of the adventurous eaters club Gastronauts, says guinea pig is a food worth pursuing only as a cultural experience. She says the meat can be tough and stringy.

I ate a quarter of a grilled guinea pig recently during a cycling trip in Ecuador. The sinewy meat was dry and sparse, and I went away hungry. But others describe what sounds like a different creature.

Miller at The Nature Conservancy says guinea pig is "delicious, very tender and hard to compare to anything else" — not even chicken. Chef Astorga at Urubamba says cuy — which he describes as "about the size of a squirrel" — has "tender flesh and very tender skin." La Mar Cebicheria's Chef Oka says cuy is "very oily, like pork combined with rabbit."

While guinea pig may be attaining star status as a hold-your-nose-and-roll-the-camera bizarre food, whether an animal so favored as a pet in the United States will become a mainstream piece of protein is, perhaps, doubtful.

"There's a clear cultural prejudice against eating guinea pigs, and rodents in general, in the United States," Miller says. "But finding ways to reduce our carbon footprint is a good idea, and so is eating small livestock, like guinea pigs."