Accessibility links
Synesthesia: Some People Really Can Taste The Rainbow : The Salt Some people with a rare neurological condition known as synesthesia can taste shapes or smell color. And when these people work in the food industry, it can radically redefine flavor profiles. 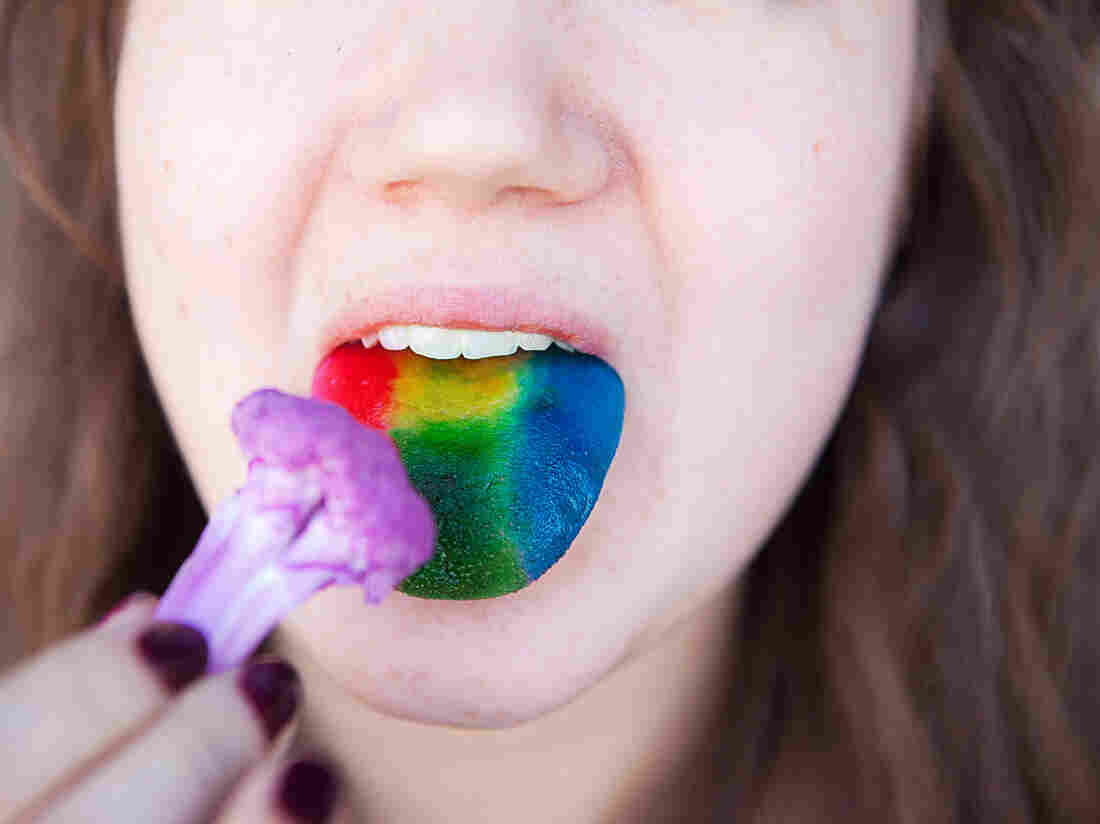 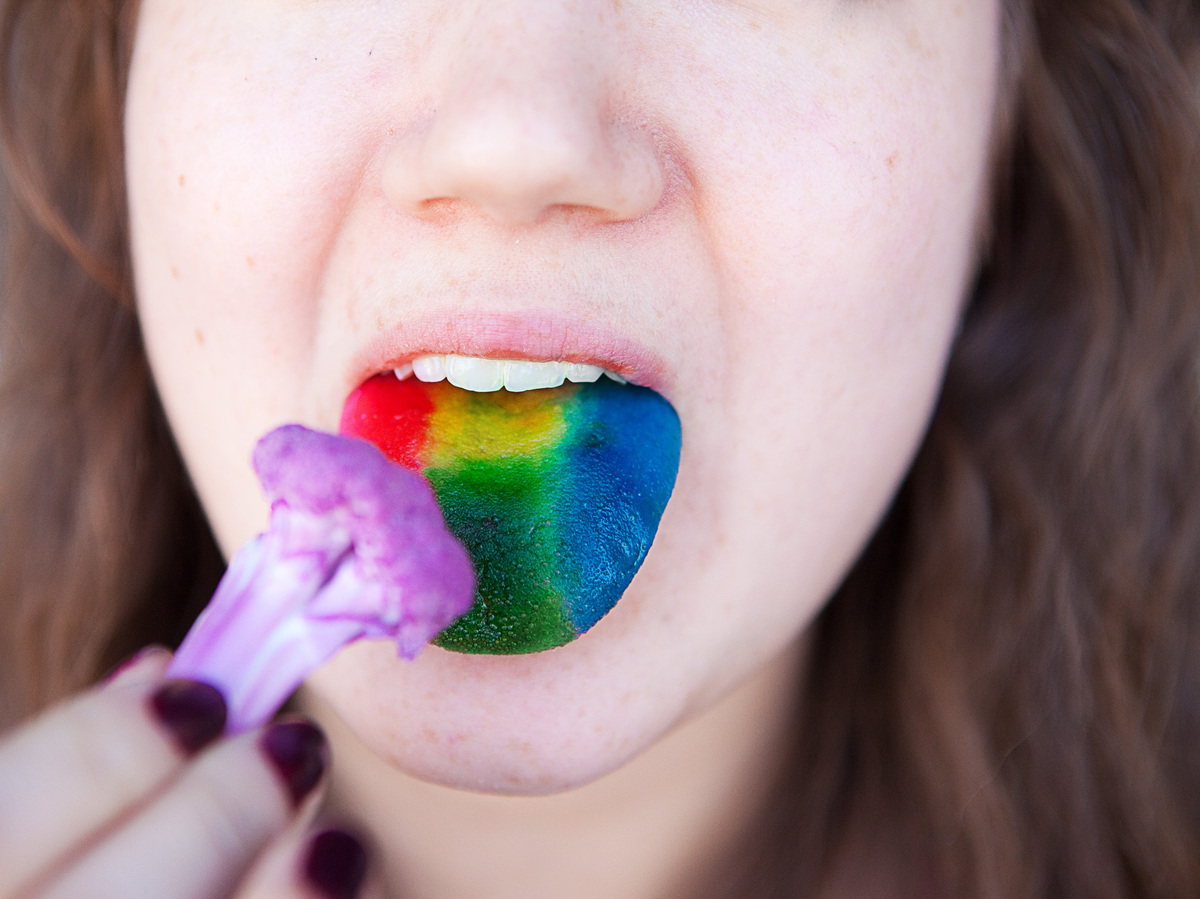 A select group of synesthetes can truly "taste the rainbow."

Plenty of us got our fill of green-colored food on St. Patrick's Day. (Green beer, anyone?) But for some people, associating taste with color is more than just a once-a-year experience.

These people have synesthesia — a neurological condition in which stimulation of one sense (e.g., taste) produces experiences in a totally different sense (e.g., sight). According to researcher Sean Day, approximately one in 27 people has some form of synesthesia. 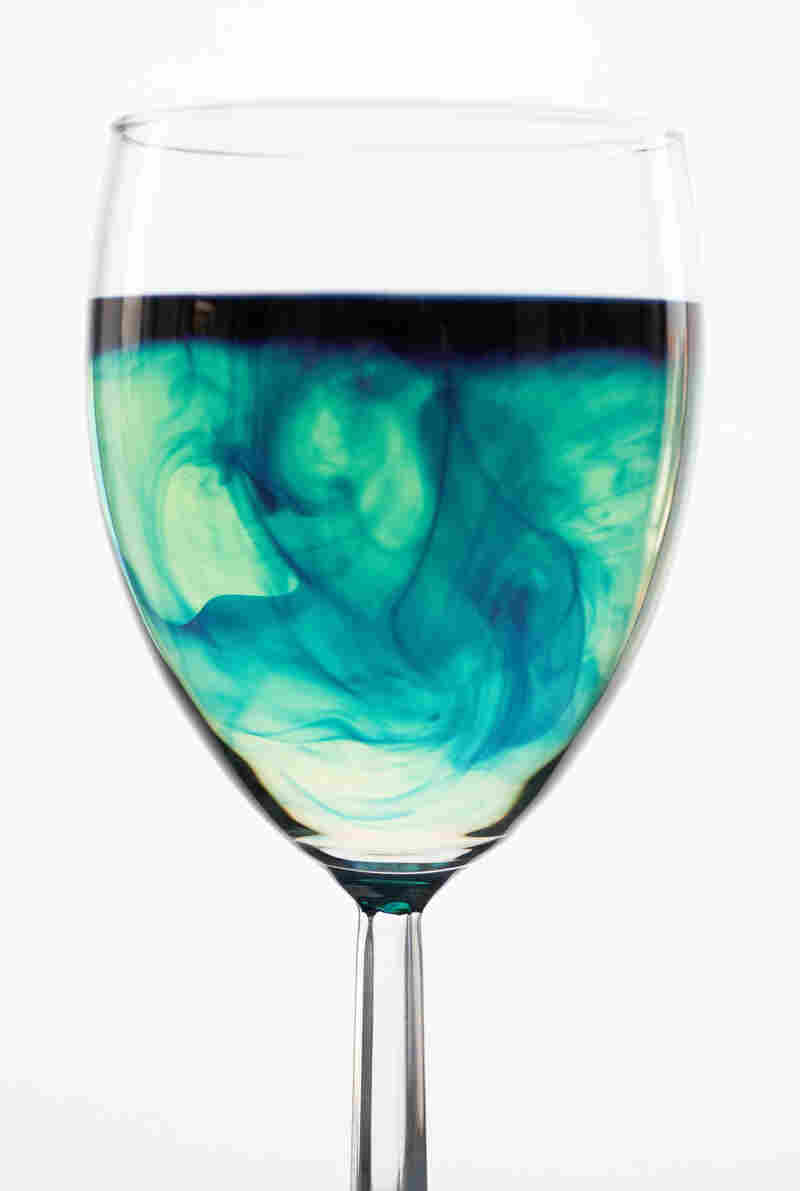 For Jaime Smith, a synesthetic sommelier, a white wine like Nosiola has a "beautiful aquamarine, flowy, kind of wavy color to it." Photo illustration by Daniel M.N. Turner/NPR hide caption 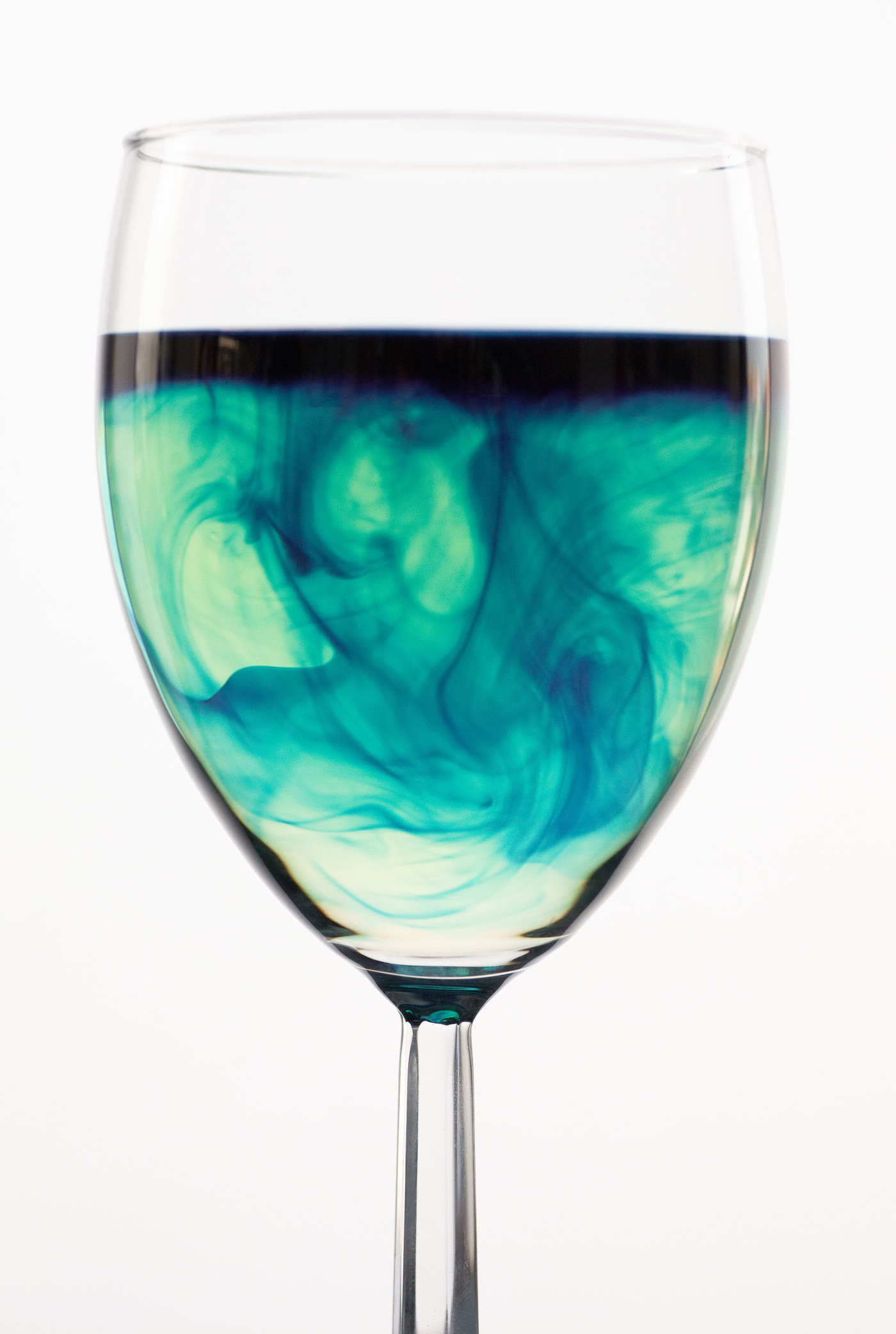 For Jaime Smith, a synesthetic sommelier, a white wine like Nosiola has a "beautiful aquamarine, flowy, kind of wavy color to it."

We've covered this phenomenon in the past. And I'm a synesthete myself — I see letters and numbers in color, and associate sounds with shapes and textures. But only a very few people — maybe only 1 percent of synesthetes — have sensory crossovers that affect their relationship with food and drink.

Jaime Smith is one of those people. He's a sommelier by trade, and he has a rare gift: He smells in colors and shapes.

For Smith, who lives in Las Vegas, a white wine like Nosiola has a "beautiful aquamarine, flowy, kind of wavy color to it." Other smells also elicit three-dimensional textures and colors on what he describes as a "projector" in his mind's eye.

This "added dimension," Smith says, enhances his ability to appraise and analyze wines. "I feel that I have an advantage over a lot of people, particularly in a field where you're judged on how good of a smeller you are," he says.

Atlanta-based pastry chef Taria Camerino also has synesthesia. But for her, synesthesia is more than just an advantage — it's a necessity.

Camerino experiences the world through taste. She tastes music, colors, shapes and even people's emotions. She says she has a hard time remembering what things look or sound like, but she can immediately identify objects based on their synesthetic flavors.

In addition to working as a pastry chef, Camerino is often asked by clients to make dishes that mimic her synesthetic experiences. She creates "flavor profiles" of things like satisfaction and discontent. She takes inspiration from music to put together nine-course tastings featuring dishes like moss-flavored cotton candy and oyster ceviche.

"I move through the world this way all the time," she explains. "If I want someone to understand it, I have to create a dish out of it. I have to make it palatable."

A synesthete himself, Sean Day is president of the American Synesthesia Association and has been tracking research on this condition for more than three decades. (He runs a popular international mailing list on the topic.)

Summarizing the state of current research, Day says the brains of synesthetes do appear to be anatomically different (although he cautions that scientists have only studied a few types of synesthesia so far). In particular, it seems that the neural connections between different sensory parts of the brain are more myelinated in people with synesthesia. Myelin is a fatty sheath that surrounds neurons and enables neural signals to travel more quickly.

Hypermyelination could explain why synesthetic experiences seem so real for people like British IT consultant James Wannerton, who is also the president of the UK Synaesthesia Association.

Wannerton has a particularly intrusive form of synesthesia, in which sounds, words and colors all have taste and texture. "It's like having an eyedropper of taste sort of dripped on your tongue constantly, just one after another after another," he explains. "It's a full mouth feel. It's exactly like I'm eating something." 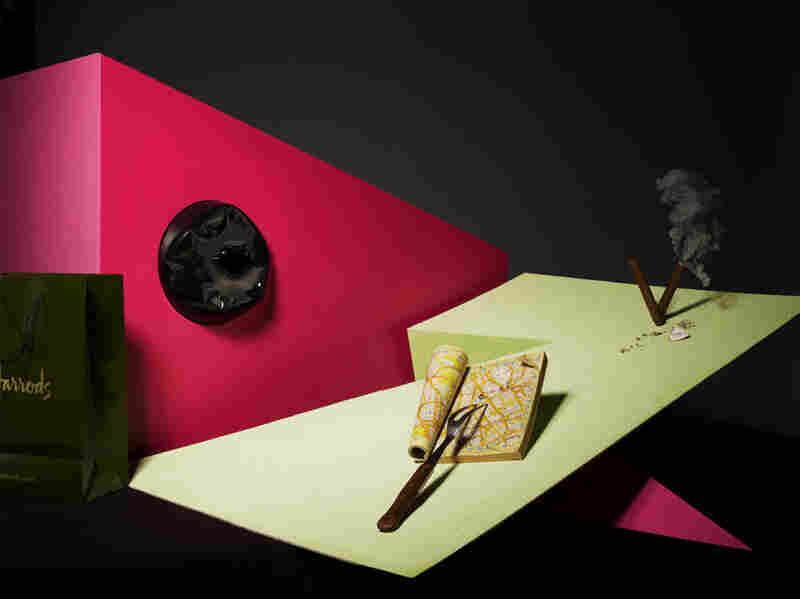 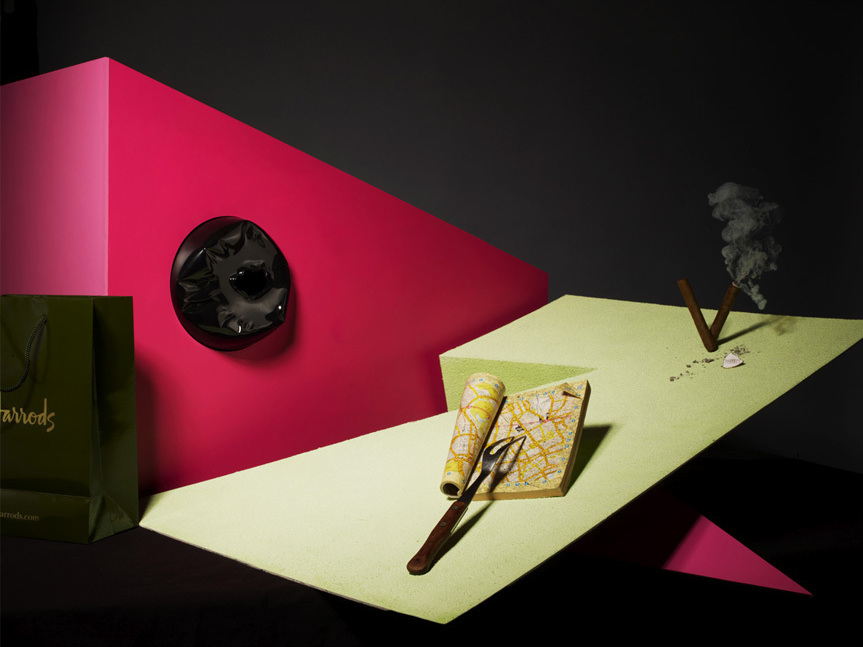 James Wannerton worked with photographers Dominic Davies and Andrew Stellitano to create this conceptual image, which for him elicits the taste of a roast lamb dinner with all of the trimmings.

Even Wannerton's brain gets fooled. "I wouldn't know what a hunger pang is because I don't get hungry," he says. "My brain [is] constantly pumping acid into my stomach to dissolve food that isn't there."

Synesthesia affects his social life, too. Eating out, for example, is a nightmare: "Different voices, the ambient atmosphere in the restaurant, it all makes a difference to my experience," says Wannerton. "You serve me food on a blue plate — it just totally messes up the eating sensation."

And some people's names aren't very pleasant, either. "If I don't like somebody's name ... I won't like them very much," he explains unabashedly.

My name, Audrey, for example, tastes strongly of tinned tomatoes. "If I actually had to speak with you every day, I'd try and shorten [your name] somehow," Wannerton tells me.

But even though his synesthesia can be quite disruptive at times (it's "absolutely ludicrous," he admits), at the end of the day, Wannerton still enjoys it.

And most synesthetes would agree, including sommelier Jaime Smith. "My synthie thing is the added bonus for me," he says. "[It's] the joy and sometimes the fun of it all."