Accessibility links
An Oral History Of New York Food: Dining Out Wasn't Always 'In' : The Salt New York is now known for pricey restaurants and celebrity chefs. But there are still a few folks who remember buying food from horse-drawn wagons in the city. An audio project aims to preserve these memories, and the voices that share them.

An Oral History Of New York Food: Dining Out Wasn't Always 'In'

An Oral History Of New York Food: Dining Out Wasn't Always 'In' 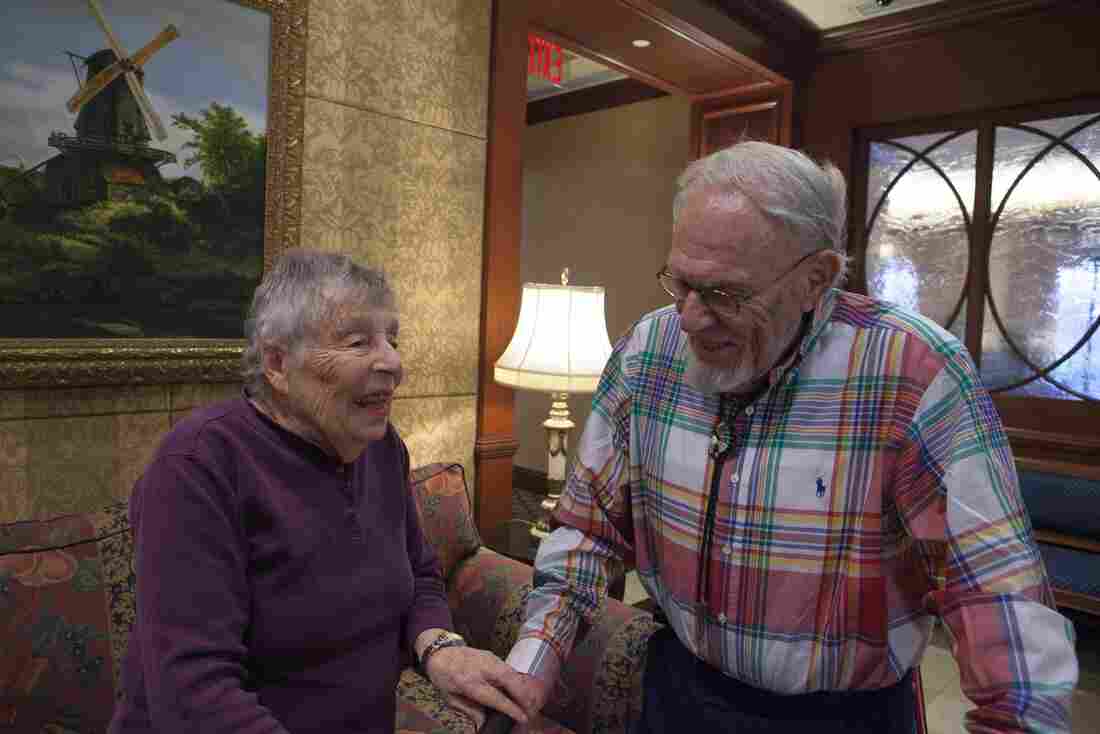 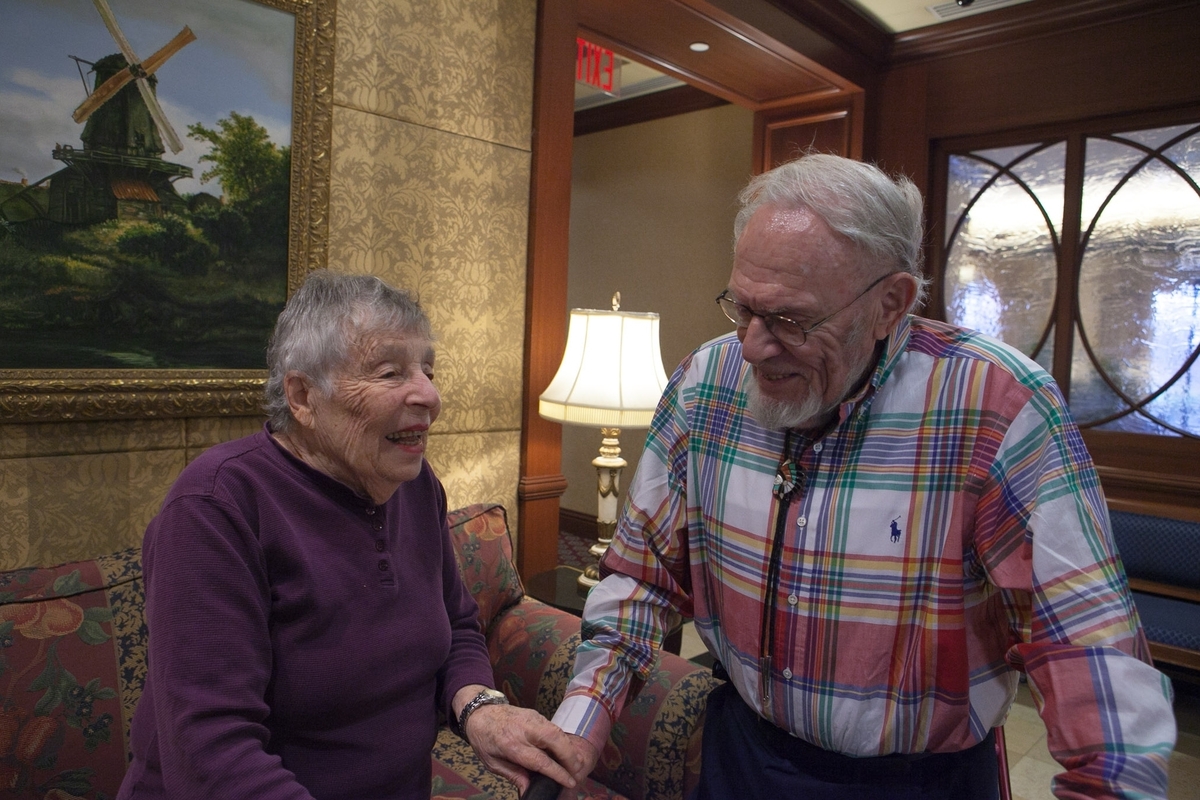 As Marcel Proust so famously documented, it's often the simplest of foods that can carry us back to remembrances of things past.

And so perhaps it's not so surprising that, when freelance food writer Anne Noyes Saini began asking New York's elderly residents about their memories of the foods of the city during the early- to mid-20th century, it was humble meals like baked beans and the fruits sold by old-timey wagons that most often came to mind.

"It occurred to me to talk to these people who had lived in the city for a long time ... and try to get a sense from them about how restaurants changed, and how even just shopping for groceries has changed," Saini tells The Salt. 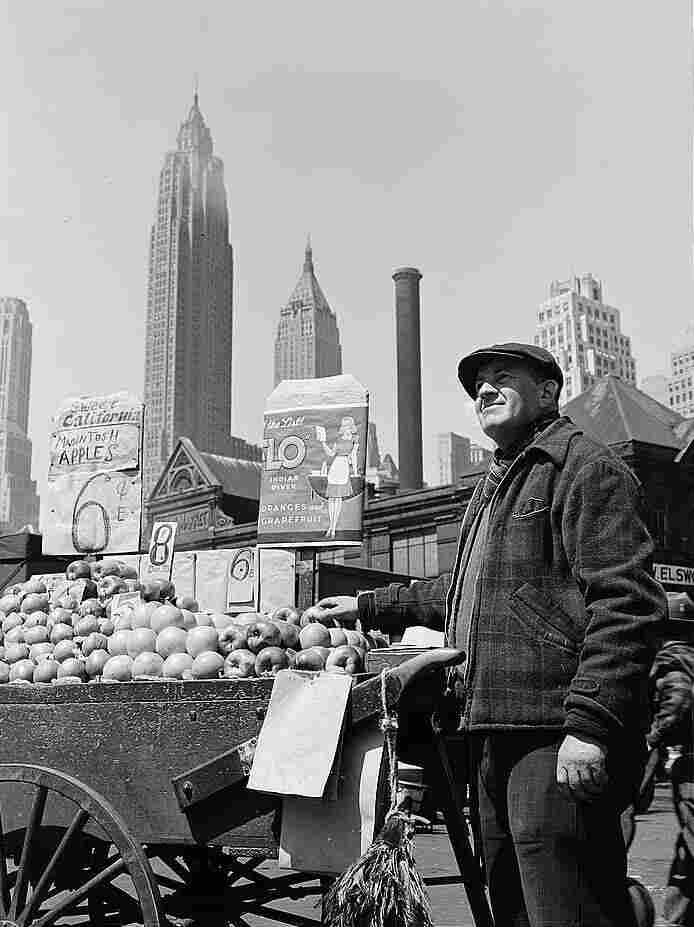 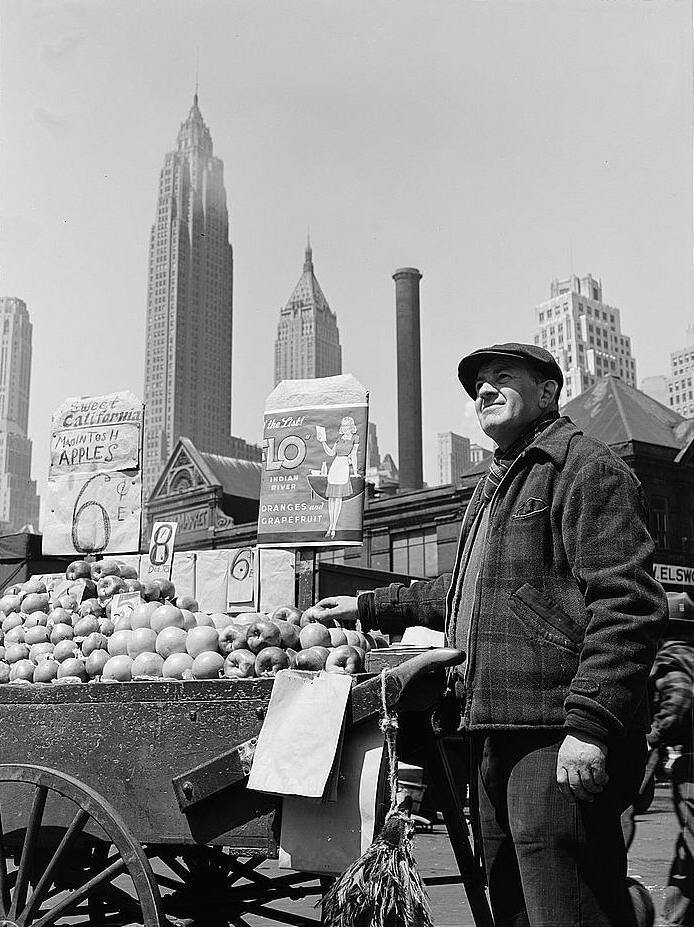 In one clip from the project, Paul J. Hintersteiner of the Washington Heights neighborhood in Manhattan recalls shopping for food in the city long before supermarkets — and even before the days of modern refrigeration. Grocery shopping was a multistop affair: fruits from traveling produce carts, dairy from the milkman, and a giant block of ice from the "ice man" to keep perishables cold.

Today, New York is home to many of the finest restaurants in the world — and New Yorkers have become accustomed to regularly dining out. "It's just take-out all the time," Saini says. So she says she was surprised to discover that, among the people she interviewed, eating outside of the home wasn't always so commonplace. 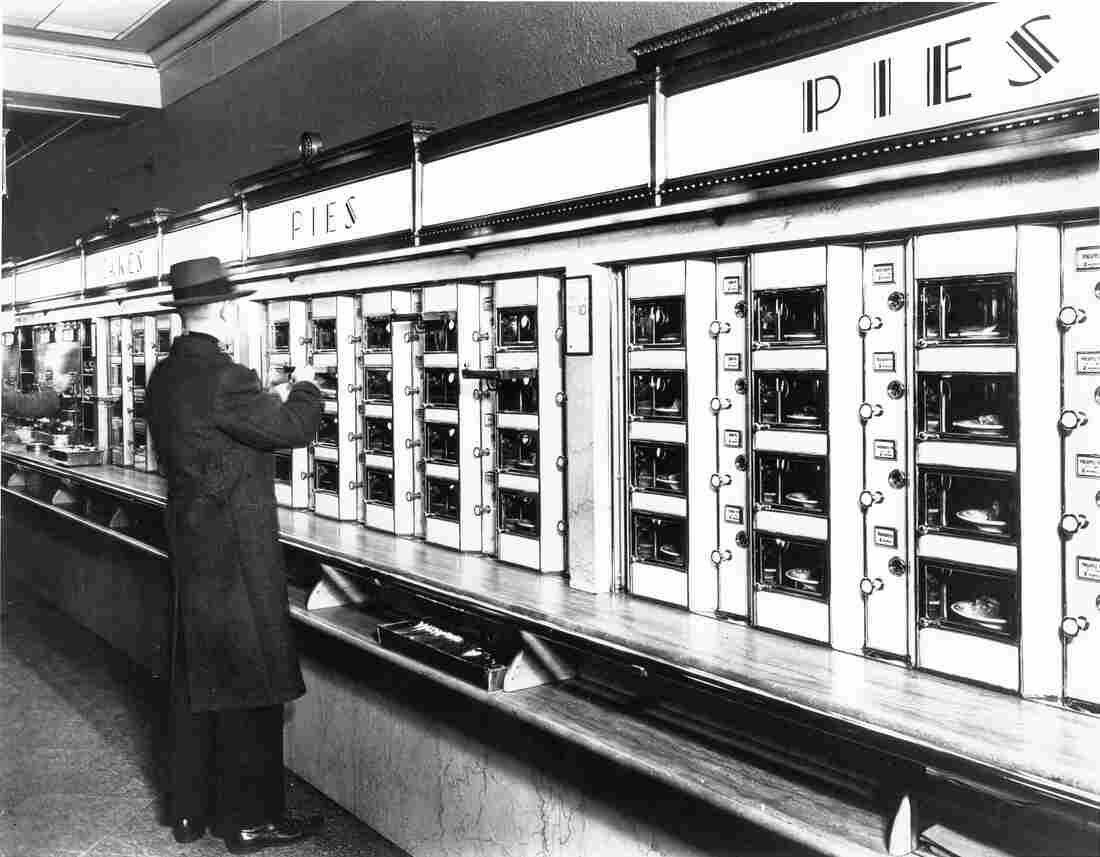 A customer selects his food at a Horn & Hardart's Automat in New York City. AP/Courtesy of Museum of the City Of New York hide caption 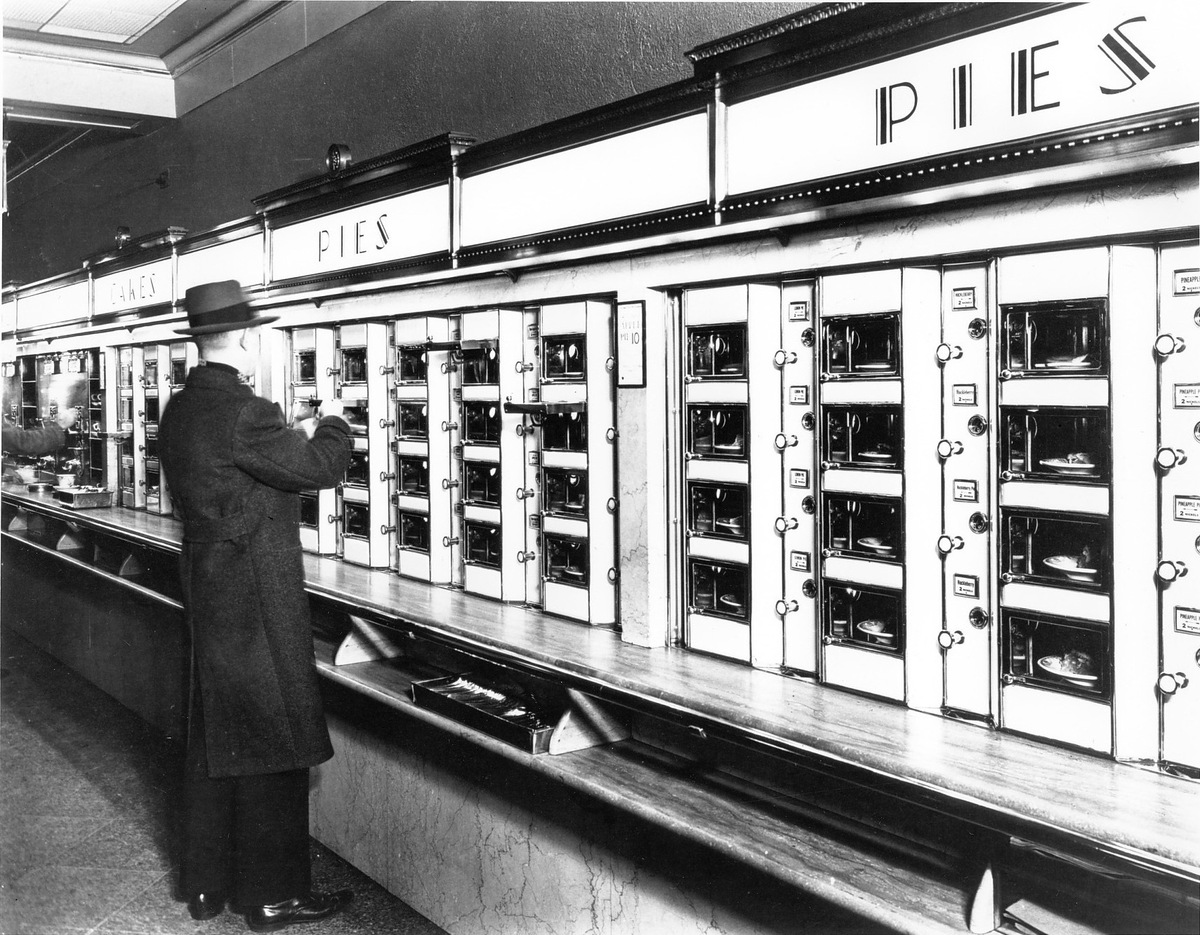 A customer selects his food at a Horn & Hardart's Automat in New York City.

AP/Courtesy of Museum of the City Of New York

In another audio clip, 90-year-old Hilda Baumol from Manhattan's Battery Park City neighborhood recalls that her family didn't eat at "elegant" restaurants, opting instead for cheap eats from the "automat" — an early fast-food dining experience. Customers would use coins to retrieve meals from vending machines. The compartments were replenished by workers behind the machine.

In his interview, Monte Malach, 85, recalls the midcentury disappearance of once-ubiquitous corner soda fountains, where people could duck in for a quick drink and listen to the Dodgers game.

Saini found participants for the project with the help of Elders Share the Arts – a nonprofit that helps older people express themselves through art. In addition to accounts from lifelong New Yorkers, the nine files Saini has posted so far include the food memories of immigrants adjusting to life in mid-20th century New York. 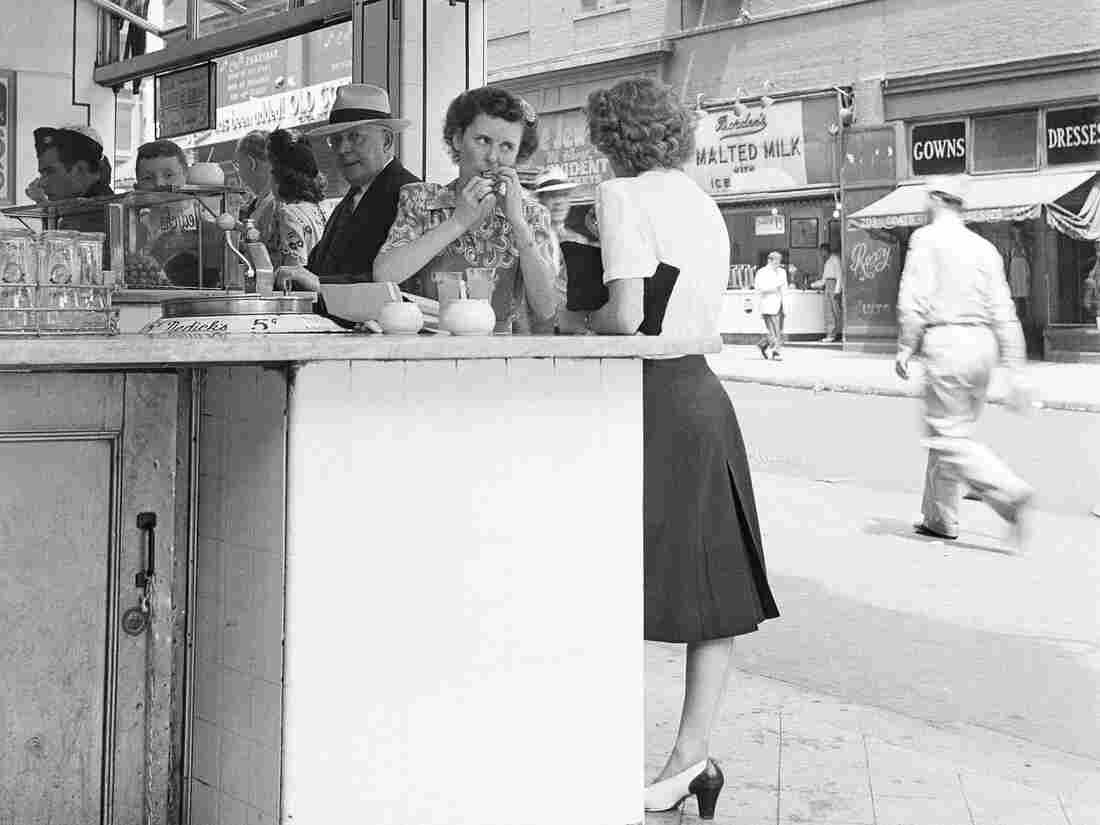 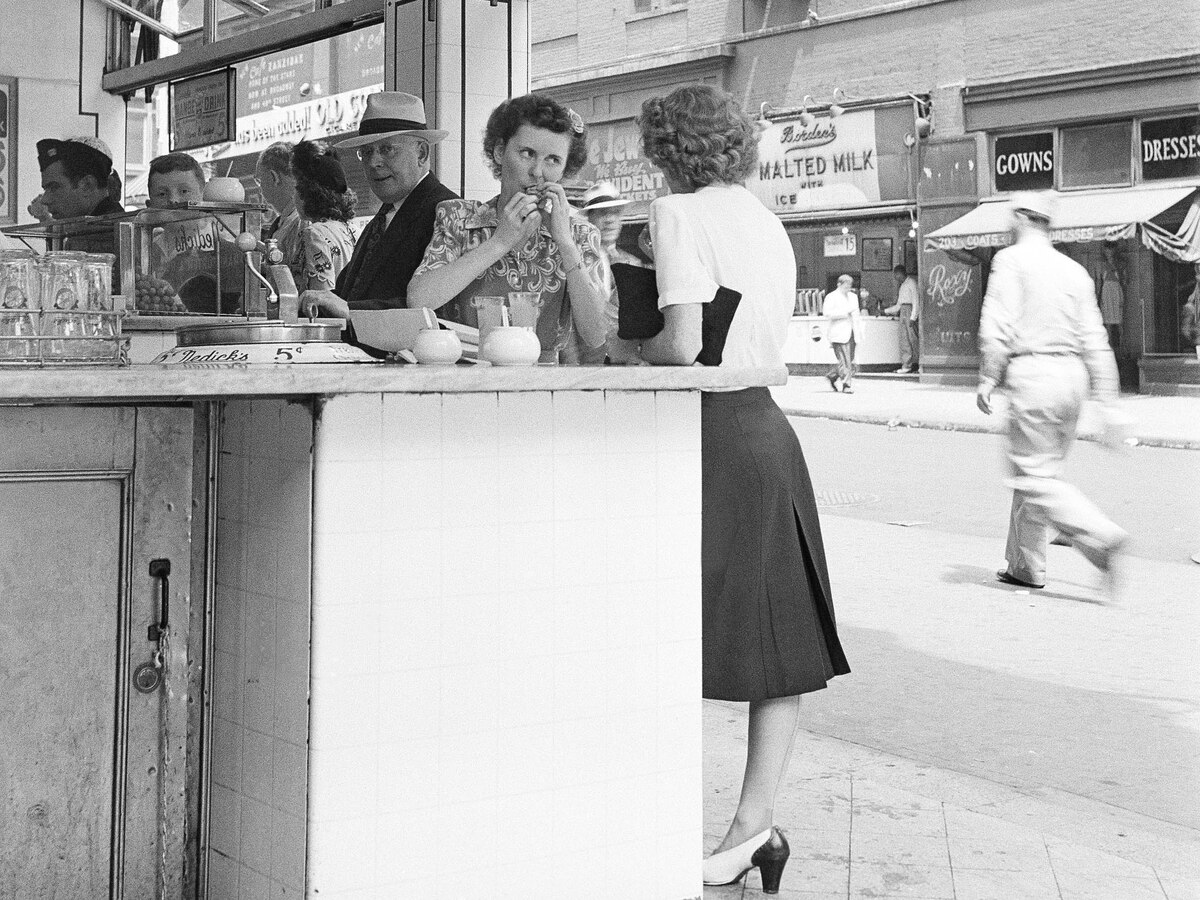 A crowded soda fountain on Broadway in New York City, 1945.

You don't hear enough from older people in the mainstream media, Saini says. "Some of them are very savvy, but I don't think you'll find them on Twitter."

For Saini, the important part of this audio archive is continuing to preserve the voices of the past.

"You hear the texture of someone's voice, you hear their accent, you hear the way they get excited about some particular thing they're talking about. You can't really get that with a print piece," she says.