Accessibility links
Recipes, Not Rockets: Cookbook Offers New Lens On Gaza : The Salt The Gaza Kitchen weaves little-known stories of Gaza food and farming among Palestinian home-cooking recipes. It's an effort not just to document the flavors of modern and historic Gaza, but also to start a new conversation about the place and its people.

When you think about the Gaza Strip, do you think "organic farming"? How about "family dairy"? Would you expect California pistachios to flavor made-in-Gaza baklava? Have you heard that Hamas has a 10-year plan to develop sustainable local agriculture?

A new cookbook, The Gaza Kitchen, weaves little-known stories of Gaza food and farming among Palestinian home-cooking recipes. It highlights flavors particular to Gaza — both the crowded, skinny, famous strip of land pinned between Egypt, Israel and the Mediterranean, and the more extensive, southeastern Gaza District of historic Palestine that existed before the first major Arab-Israeli war in 1948.

"Cumin, garlic and chilis are kind of the quintessential trio of the cuisine," co-author Laila El-Haddad, a Gazan now living in Maryland, tells The Salt. "Herby, peppery, lemony, piquant. A lot of green dill, as well as dill seeds, as well as sour flavors in all their forms — lemon, sour pomegranates, lots of peppers." 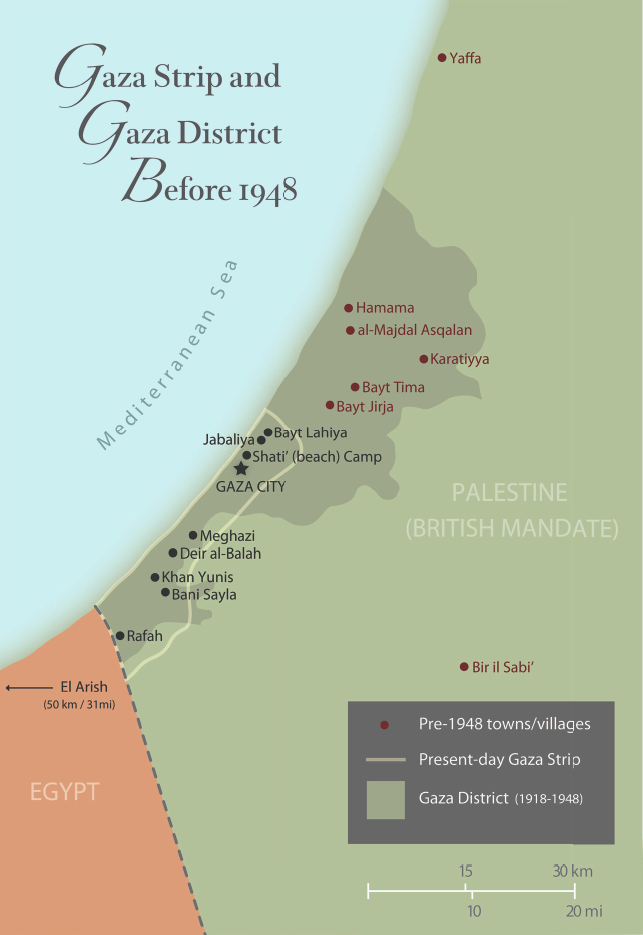 A map of historic Gaza before the first major Arab-Israeli war in 1948. Courtesy of Linda Quiquivix hide caption

El-Haddad and co-author Maggie Schmitt dreamed up this cookbook after Schmitt visited Gaza in 2009 and wrote a piece in The Atlantic, "Eating Under Siege," describing how Israel's severe restrictions on Gaza affect what people eat.

Doing background research, Schmitt found almost nothing online about local food, save for a few columns from El-Haddad's blog-turned-book, Gaza Mom. The two talked and emailed, but first met in person on the ground in Gaza, when the Rafah border crossing to Egypt opened in 2010 and they could both travel there. They discovered people who have been displaced for decades preserving a very precise sense of identity through food.

"Third- and fourth-generation Palestinian refugees, who make up the bulk of Palestinians in the modern-day Gaza strip, really held on to the very specific food traditions of their villages, down to how they would finish a stew," says El-Haddad. "Someone from the village of Beit Timma might finish their stew with fried onion, never garlic. Whereas someone from Gaza City would add dry red peppers, or generally add a lot of heat. And that would never be the case with the fahaleen, those from the farming, interior areas."

Recipes cover salads, stews, breads, appetizers, desserts and drinks. Kishik, we learn, are breadlike disks of fermented wheat traditionally stored for months as a way to preserve milk products for cooking. The Gazan version uses sheep's milk and red pepper flakes. Fattit ajir is a spicy roasted watermelon salad, a specialty of the southern Gaza strip. There is advice on what basic ingredients to have on hand, and Gazan "common sense" cooking traditions. For example, rinse chicken, rabbit or fish in cold water, with a bit of flour and lemon juice, before cooking.

By spending time in private kitchens, El-Haddad and Schmitt aimed not only to capture and codify Gazan cuisine, but to tell a new tale of Gaza. "For us, describing life in the homes, family economy, households, was really important," says Schmitt, "because that side of the story in Gaza is almost completely unknown and underrepresented."

The Gaza Kitchen tells a political story, too, with sidebars on U.N. food rations, electricity and water shortages, Israeli limits on trade and restrictions on fishing.

"Gaza was once famous for its fish," El-Haddad and Schmitt write. "Now the Israeli Navy limits Palestinian fishing boats to just three nautical miles from the coast. Violations are punishable by violent harassment, boat seizure, arrest and gunfire."

As part of the ceasefire between Hamas and Israel after shooting exchanges last November, the fishing limits were increased to six nautical miles off Gaza's shores, still short of the 20 set by the Oslo Accords two decades ago.

However, an Israel official confirms a three mile limit was re-imposed March 21, in response to rockets fired from Gaza during President Obama's visit. The official NPR spoke with did not know how long the three-mile limit will be enforced.

Setting food overtly into a political context is one way this culinary exploration of the region differs from the high-profile Jerusalem: A Cookbook, published last year by the Jewish-Muslim duo of celebrated chef Yotam Ottolenghi and Sami Tamimi, the head chef at Ottolenghi's London restaurants. Ottolenghi and Tamimi's cookbook summarizes the city's centuries of upheaval and disputed ownership today and takes on the "hummus wars" — passionate discussions over whether Jews or Palestinians bring the dish closest to perfection. But it mostly sticks to food.

"I think we dive further into the politics, and they kind of skirt it," Schmitt says. "But reading between the lines, I feel like our intentions are kind of parallel, or sympathetic at least."

Schmitt and El-Haddad say they've been asked to be part of a discussion with Ottolenghi and Tamimi, something The Gaza Kitchen authors would welcome.

"We like to say that when you've entered someone's kitchen, when you've tasted their food, it's harder to bomb that person," El-Haddad says. "You begin to think of them as human beings."

She hopes this peek into home cooking in Gaza starts a conversation about the place and people that "doesn't include the words terrorism, fanatics and rockets."

Below, two Gazan recipes for spring.

El-Haddad and Schmitt write that herbal tea, particularly sage tea, is a traditional way to end a meal, along with fruit and nuts. They found this refreshing herb combination at the Gaza Safe Agriculture Project organic farm.

Combine herbs in a pot and add boiling water. Steep for 5 minutes or until color is a pale yellow-green. Sweeten as desired.

This recipe says avocados are not native to the Gaza area but were introduced by Israeli settlers. Israel pulled out all settlers from the Gaza strip in 2005, but El-Haddad and Schmitt write that "the avocados have been adopted with enthusiasm." This mash may sound somewhat similar to guacamole but brings distinct flavors and presentation. El-Haddad and Schmitt call it "an elegant starter, part of the new Gazan repertoire."

Mash garlic and chili pepper with salt in a mortar and pestle. Add avocado, yogurt and lemon juice and mash until smooth, stirring the bottom of the bowl to make sure all the garlic is mixed in. Swirl the top of the salad with the bottom of a spoon in a circular motion creating a small canal, then drizzle with olive oil. Decorate with paprika and cumin as follows: Wet your thumb with some water, place it in a bowl of paprika, then press down on edge of avocado salad, leaving a red fingerprint. Repeat procedure, alternating paprika with cumin, all around the bowl. Garnish with thinly sliced lemon. Serve with Arabic bread.