Accessibility links
Dunking Science: Do Cookies Really Taste Better Dipped In Tea? : The Salt With a high-tech gadget, scientists can measure how much flavor is released from foods while we're eating. One British chef uses the device to figure out why we love to dip biscuits into tea. A quick plunge really does make the cookie yummier. 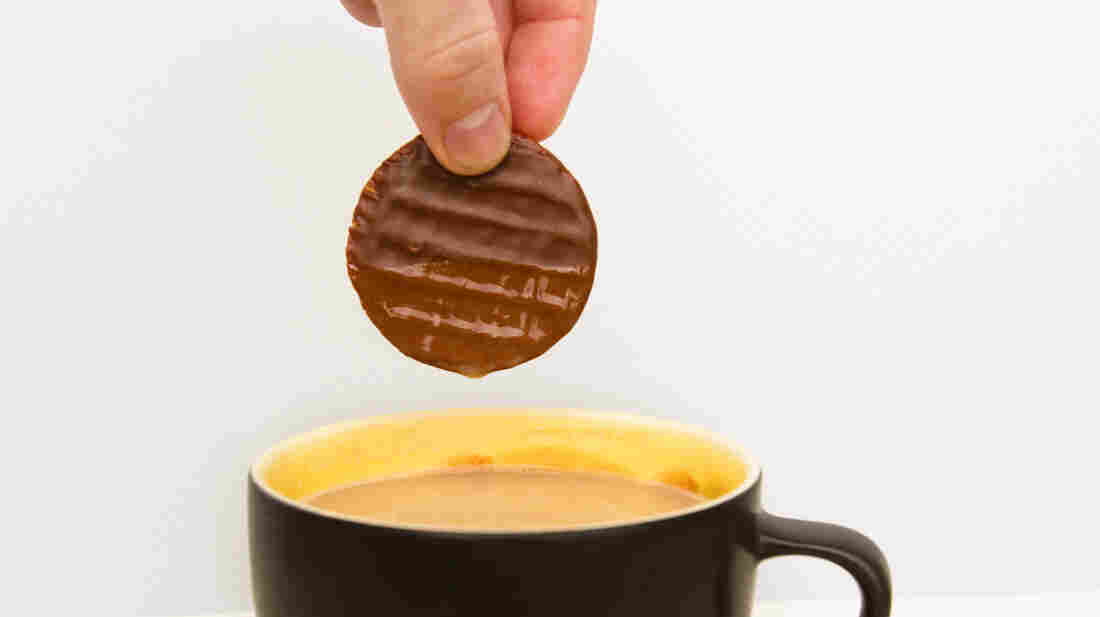 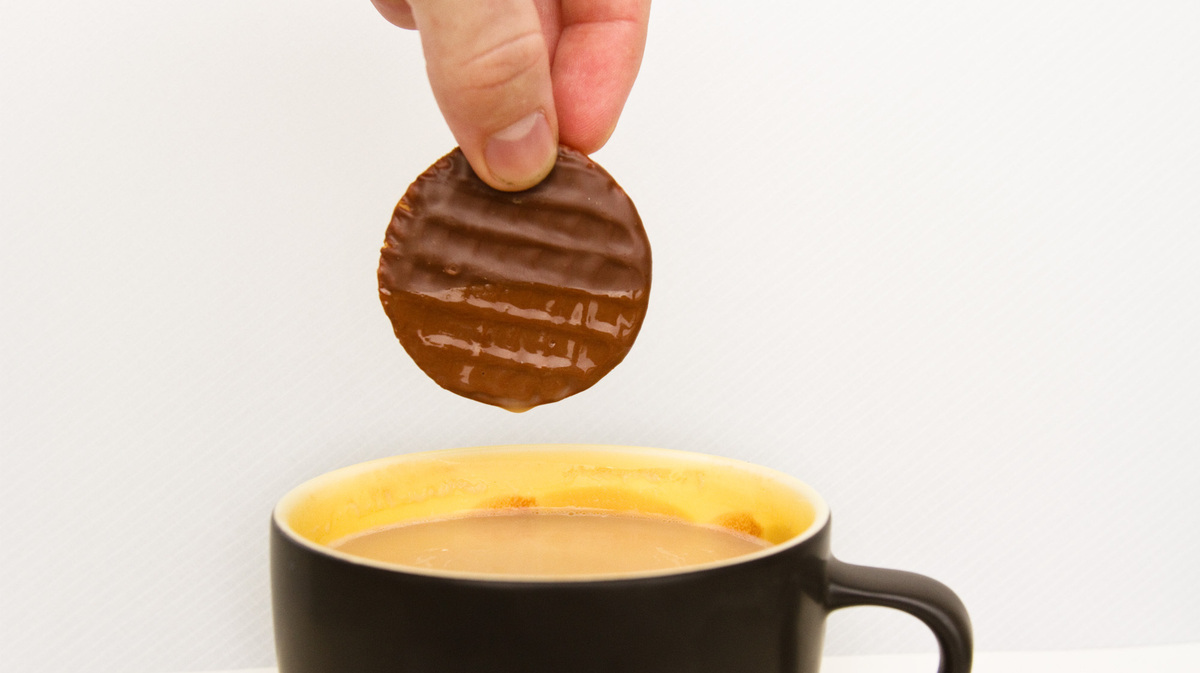 Just a little plunge into hot tea makes a chocolate-covered biscuit release its flavor more quickly in your mouth.

Brits and Americans may have split less than amicably a couple of centuries ago, but we can still find cultural common ground when it comes to life's pleasures: The Beatles, Downton Abbey and dunking cookies.

Of course, the Brits call them "biscuits" and dip primarily in tea, while we are more promiscuous and are willing to plunge our treats into coffee, hot chocolate or even milk.

But does immersing a cookie into a warm beverage really make it taste better? And if so, why?

That's what the British chef Heston Blumenthal recently set out to discover on his TV show, Heston's Fantastical Food. With the help of a high-tech gadget inserted up the nose, he found that a chocolate-covered biscuit dipped into hot black tea did indeed have more flavor than an undunked one. 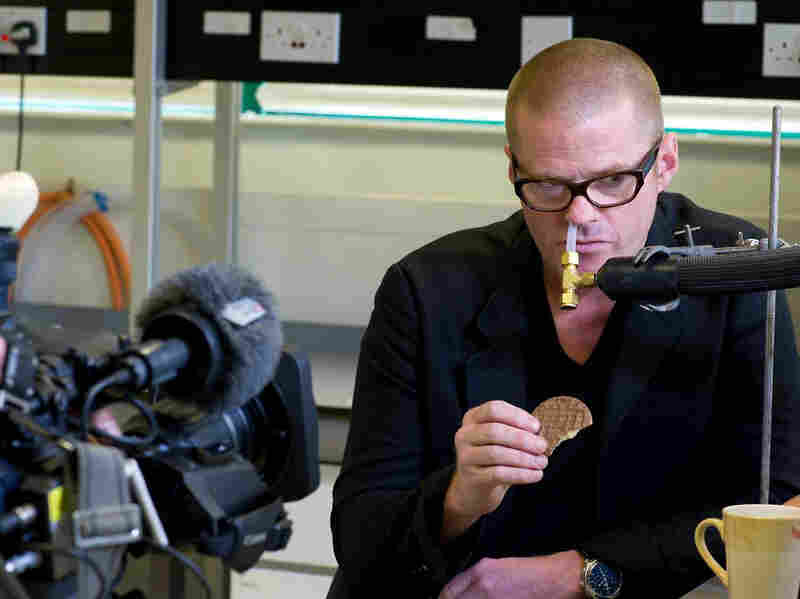 Hooked up to a gadget that measures food flavors, chef Heston Blumenthal tests whether a cookie tastes better after it's dipped into tea. Courtesy of the University of Nottingham hide caption

toggle caption
Courtesy of the University of Nottingham 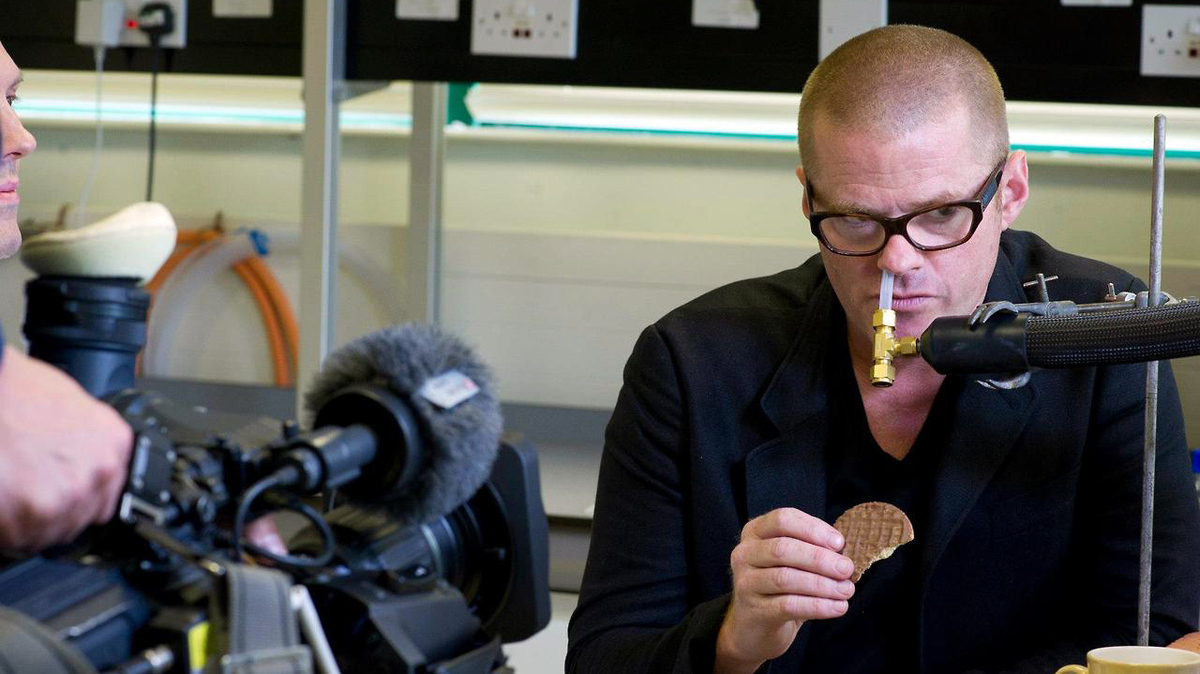 Hooked up to a gadget that measures food flavors, chef Heston Blumenthal tests whether a cookie tastes better after it's dipped into tea.

Courtesy of the University of Nottingham

Blumenthal isn't well-known the U.S., but he's a household name in England. He writes cookbooks, stars in TV shows and runs The Fat Duck restaurant just west of London. A few years ago, The New York Times said The Fat Duck "is widely considered one of the world's finest cathedrals to modernist cuisine, the sort of restaurant where a meal could start with nitro-poached aperitifs, finish with 'the smell of the Black Forest' and take four hours in between."

The chef likes to understand the chemistry behind his food. So to solve the mystery of the tea-drenched biscuit, Blumenthal enlisted the help of food scientists at the University of Nottingham. They've developed a device, called MS-Nose, which measures the amount of flavor released in your mouth as aromas when you take a sip of cabernet, melt a chocolate bar on your tongue or chew on a cookie.

When Blumenthal hooks himself up to the device and starts chomping on a chocolate-covered digestive, the MS-Nose sends data back to a computer screen, where the levels of flavor released are plotted on a chart.

"We're measuring the biscuity flavor — known as methylbutanol to the boffins" — (that's British slang for science types) — he says during an episode of his show that aired in the U.K. last November.

Methylbutanol is a compound that gives cookies and baked goods a toasty or malty taste. When Blumenthal chews on a dry biscuit, the flavor dutifully registers on the line graph on a screen. But when he then dips the biscuit into tea and takes another bite, the "flavor line" noticeably spikes up on the chart.

"The results are astonishing!" he exclaims. The wet biscuit not only released more cookie flavor, but the aromas also burst into Blumenthal's mouth more quickly. 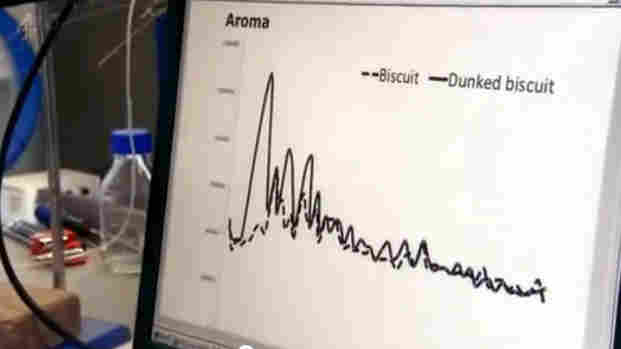 Hard-core scientific evidence that an English biscuit tastes better given a dip into tea? The MS-Nose measures more cookie aroma from a dunked biscuit than a dry one. Screenshot from shazzandfred/YouTube hide caption 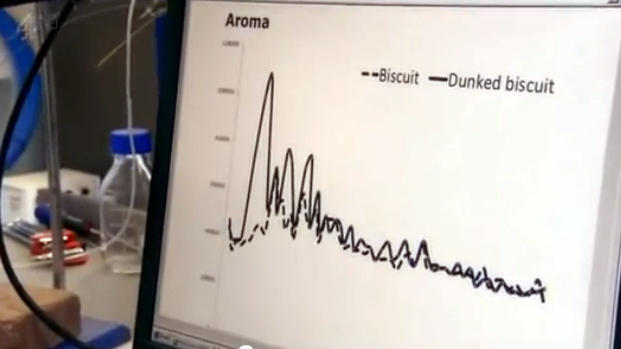 Hard-core scientific evidence that an English biscuit tastes better given a dip into tea? The MS-Nose measures more cookie aroma from a dunked biscuit than a dry one.

Shoving a tube up one's nose may seem like a funny way to measure flavor, but it makes sense when you consider that flavor is made up of both tastes and aromas, says food scientist Avinash Kant, who works with the MS-Nose at the company Flavometrix on the Nottingham campus.

Tastes, Kant explains, are detected on the tongue and include the basics, like salty, sugary, sour and bitter. The aromas, meanwhile, are sensed in the nasal passages, right between the eyes and behind the bridge of the nose.

"There are connections of passageways through your nose, ears and mouth," Kant tells The Salt. "When food interacts with your saliva in your mouth, aromas get released" and travel to your nose from the back of your throat.

That's where the flavor magic happens, Kant says. "There are thousands of aromas, all with slightly different properties. They are the primary factor that determines a food's flavor." They separate $100 Bordeaux from "Two-Buck Chuck" (which is now $2.49, FYI), Italian Parmigiano-Reggiano from string cheese, and a dunked biscuit from a dry one.

To reach your nose, Kant says, these aromas have to jump from the cookie into the air. The hotter and wetter the biscuit, the more easily the aromas can make this leap.