Accessibility links
Italy's Chocolate Easter Eggs: Big, Bold And Full Of Bling : The Salt Easter eggs are a tradition in many cultures. But in Italy, elaborately decorated chocolate eggs — some costing upwards of $300 — are the holiday food gift of choice. The best part? There's a gift tucked inside (and it can be a doozy). 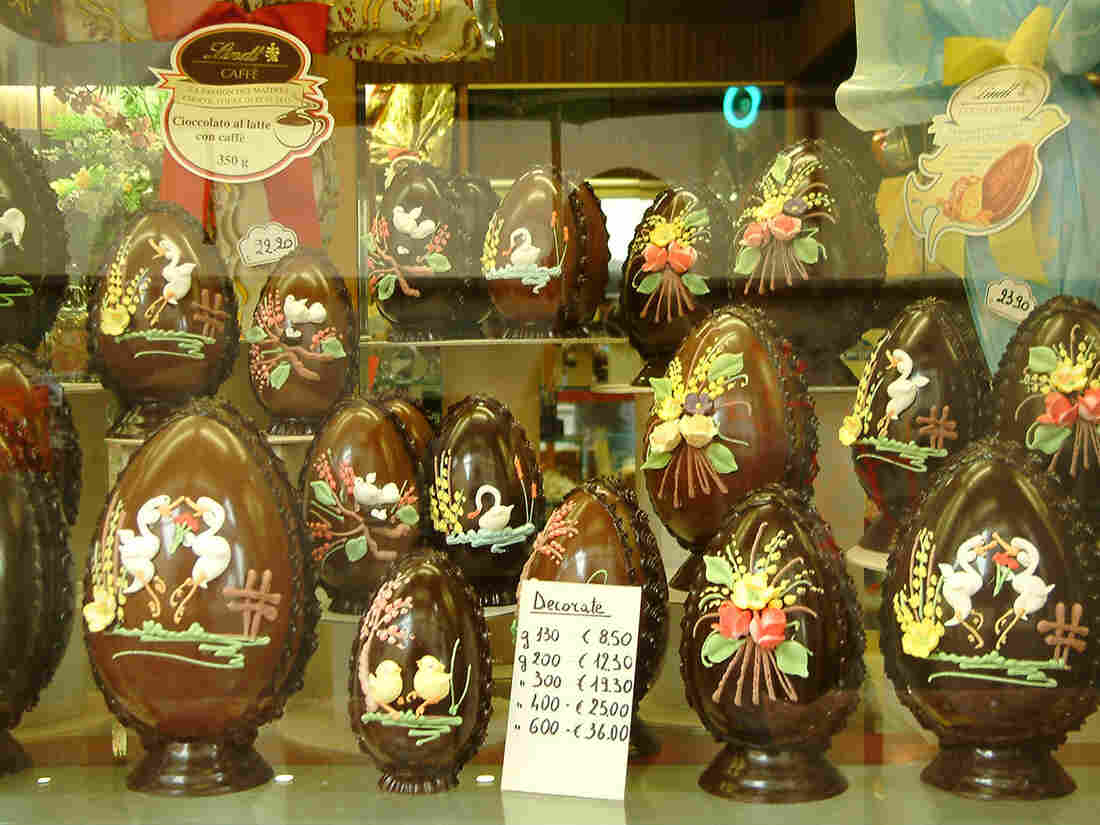 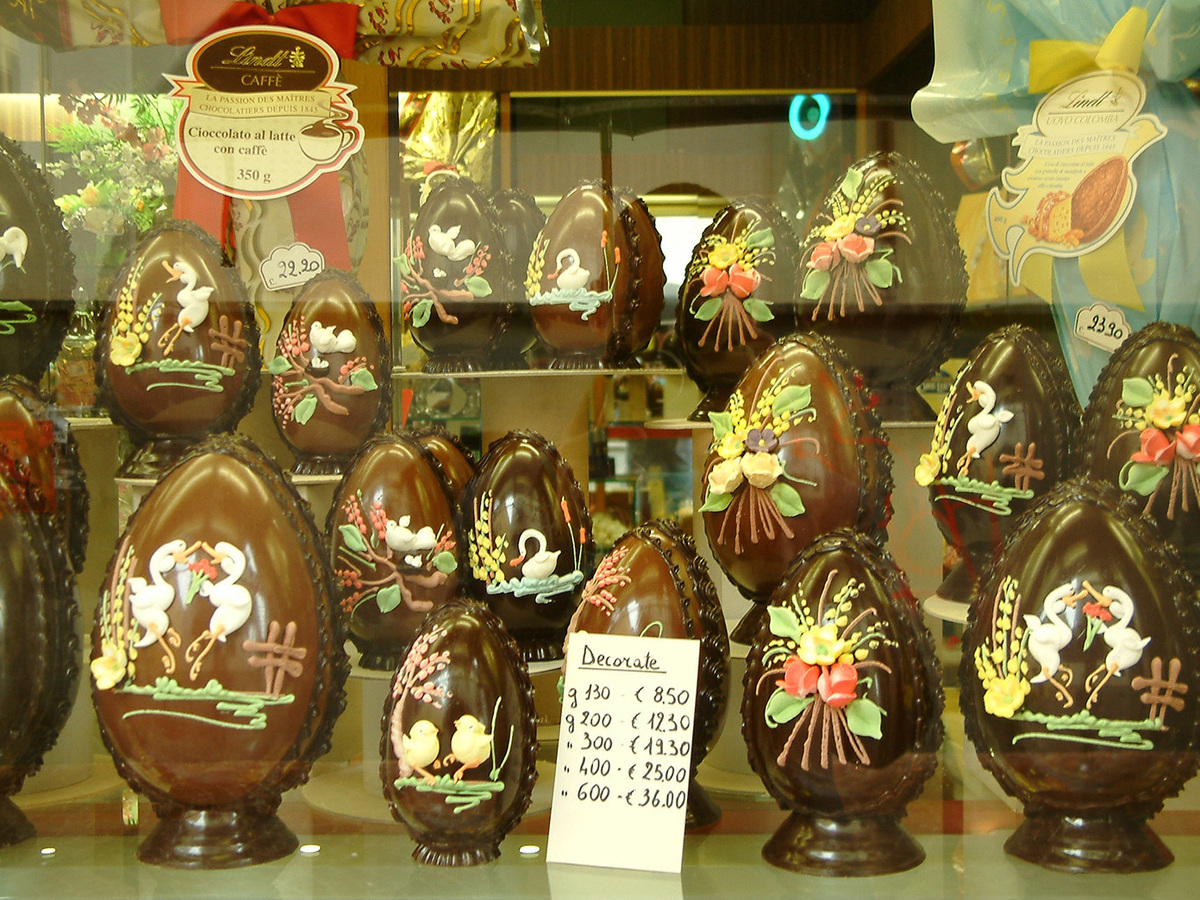 In Italy, elaborate chocolate Easter eggs are considered the food gift of choice this time of year.

In Italy, there are no Easter egg hunts, no marshmallow Peeps and definitely no jelly beans.

Instead, there are chocolate eggs — massive, elaborately decorated, beautifully wrapped chocolate Easter eggs that now fill shop windows across the country. The sweet treats are considered Italians' food gift of choice at this time of year. And each one comes with a surprise tucked inside. 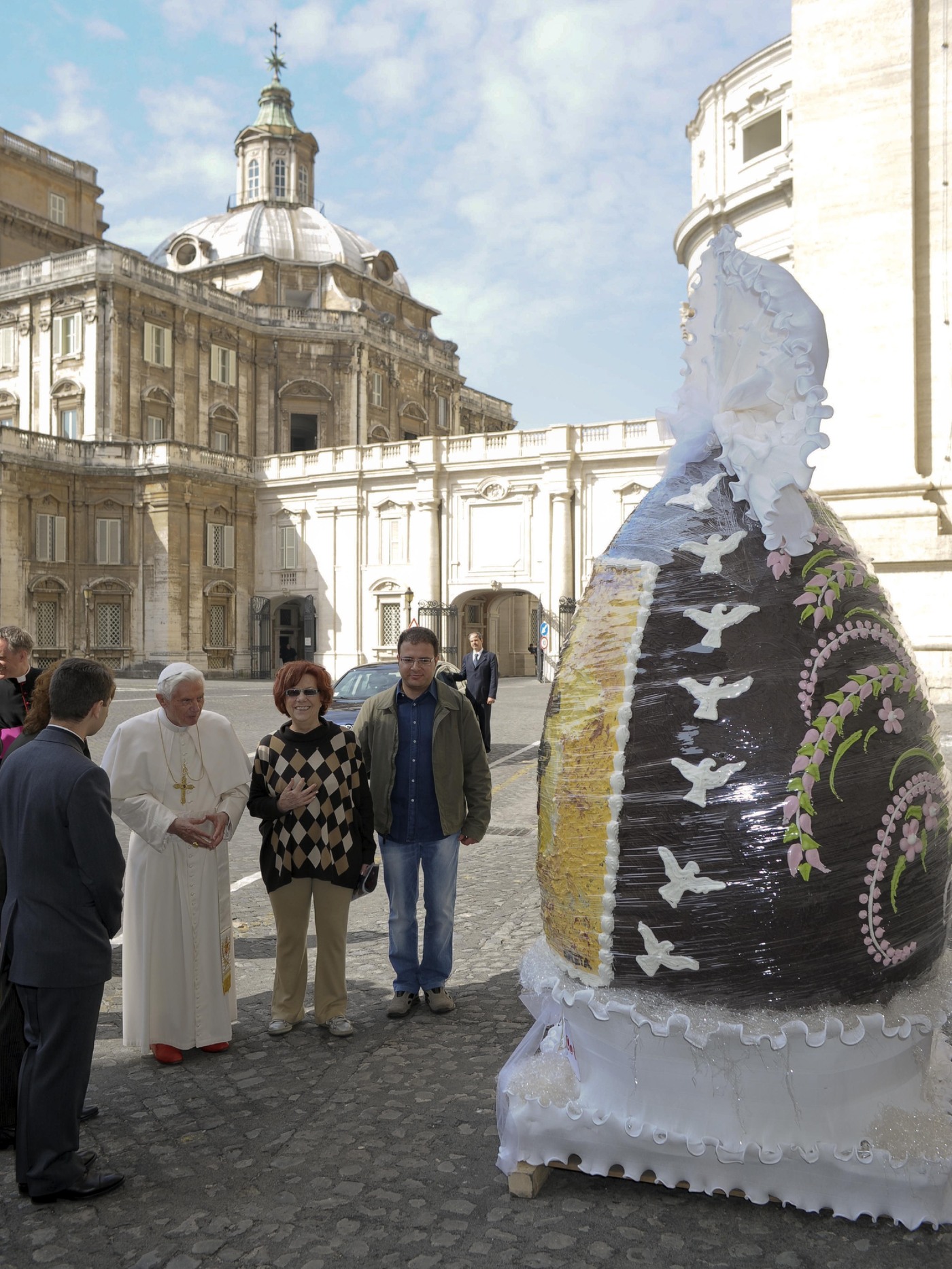 In mass-produced eggs, the hidden prize is often a simple trinket, such as a key chain. But artisanal chocolatiers also abound — and many will make customized eggs for clients with a personalized gift hidden within. And the gift-giving can get quite elaborate.

"Engagement rings and car keys are typical gifts," says Maurizio Proietti, a second-generation chocolate maker and owner of Rome's La Bottega del Cioccolato, naming some of the gifts he's been asked to conceal. "Two tickets to a tropical island — that was something unusual."

The surprise inside, adds Minchilli, depends on whom it's for. "A typical gift would be a charm for a necklace or bracelet," she tells The Salt. "But if it's for your wife, you might get a very small egg with gold earrings inside. A child might get a small toy."

A symbol of rebirth and renewal, eggs have long been associated with spring around the world. Chocolate eggs started becoming popular across Europe at the end of the 19th century, as chocolate became more affordable. But in Italy, the tradition really took off after World War II, when people weary of wartime deprivations finally found themselves with a little extra spending money, Minchilli says. She's watched the tradition evolve over the 40 years she's lived in Rome.

"I can remember living here in the '70s, and the eggs were quite simple. But they grew and grew, along with the idea that they have some sort of surprise inside," she tells The Salt. "Like a lot of traditions in Italy, they start very simply, with people giving a chocolate egg at Easter, and as time went on, people wanted to make a bella figura, a special gift, for the holiday." 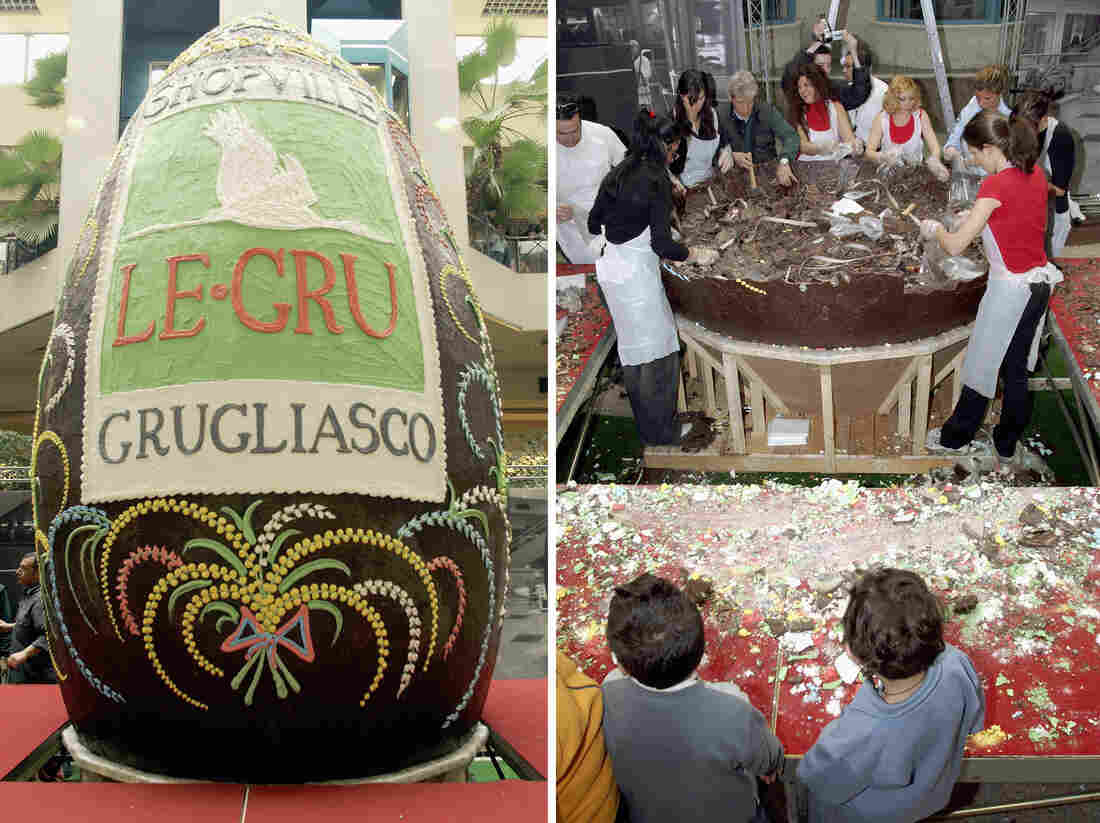 In 2004, a shopping center in Turin attempted to make the world's tallest Easter egg. This one was more than 18 feet tall and weighed 5,500 pounds. Photos by Giuseppe Cacace/Getty Images hide caption 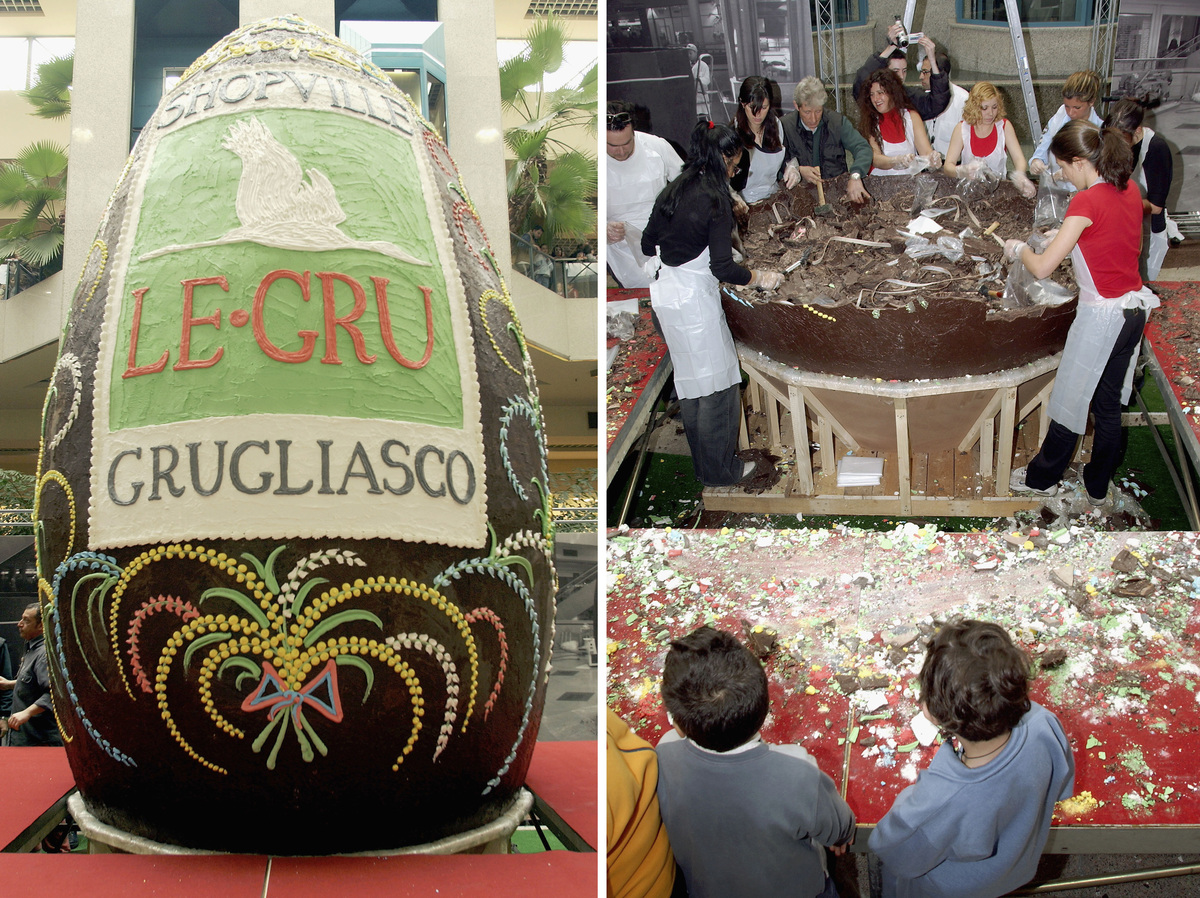 In 2004, a shopping center in Turin attempted to make the world's tallest Easter egg. This one was more than 18 feet tall and weighed 5,500 pounds.

Minchilli splits the artisanal chocolatiers into two factions. In one camp are those who focus on chocolate with high-quality ingredients. Their eggs come wrapped in fancy dress, swaddled in elegant silks, tulle and foils tied neatly with ribbons.

And then there are those who go for edible decoration, using pastel icing to personalize eggs. In this camp is 91-year-old Virginia Valzani, who still tends the till at her family's 88-year-old chocolate shop in the heart of Rome. Valzani sells 1,000 eggs every Easter.

"We start making the eggs 40 days before Easter," Valzani tells The Salt, "and get many of the same customers year after year."

Adds Minchilli: "People come from all over Rome at Easter time to buy their eggs at Valzani because they offer every single size of egg; and white, milk and dark; and they're not expensive."

Eggs can vary wildly in price, depending on size, quality of chocolate used and elaborateness of wrapping and other decoration.

A basic store-bought, industrially produced egg might set you back 4 or 5 euros (about $5 or $6 U.S.). But in chocolatier Proietti's shop, prices can range from $11 for a small egg to $130 for an egg that weighs 4 pounds and is well over a foot high. Eggs priced at $300 and beyond are not unheard of.

Even though the eggs are hollow, a good-sized egg can weigh half a pound. And they're everywhere, from supermarkets to small alimentari, or corner stores, and even coffee bars.

"Every single coffee bar sells these eggs," says Minchilli, "and they'll have one massive egg that weighs around 20 pounds. "They sell tickets and raffle it off the day before Easter. I've never won one, but I keep buying the tickets!"