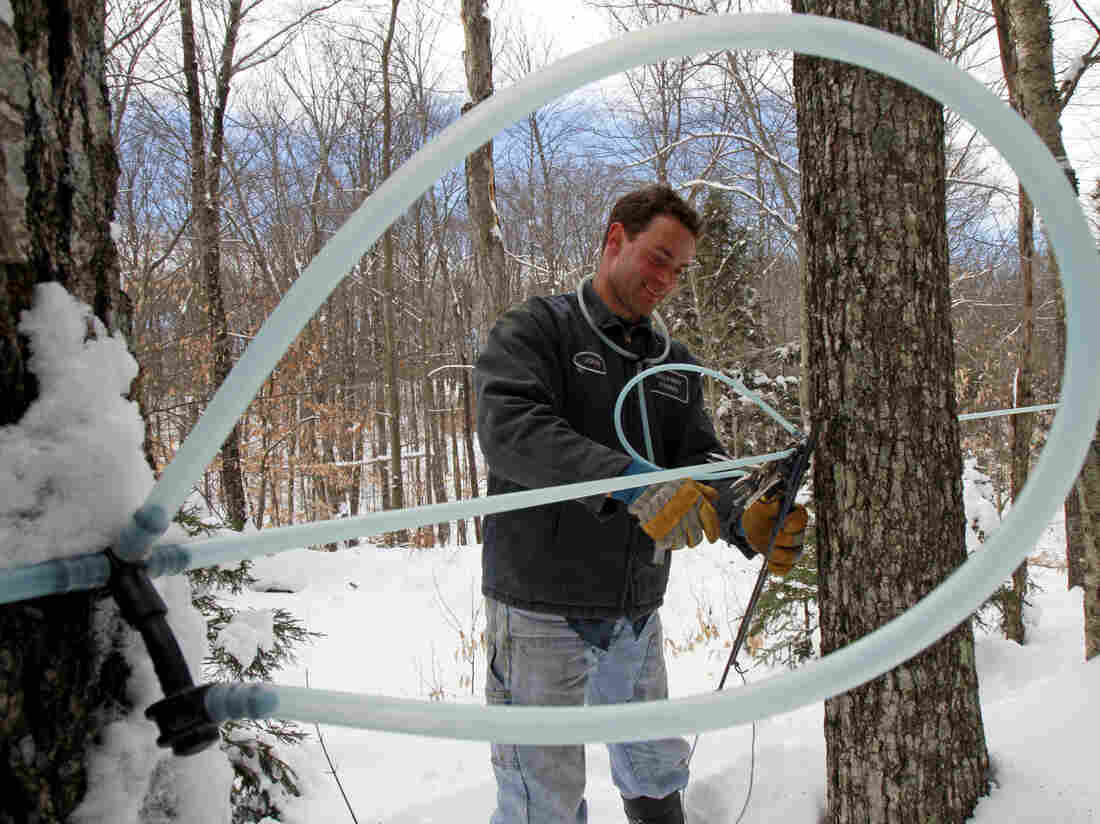 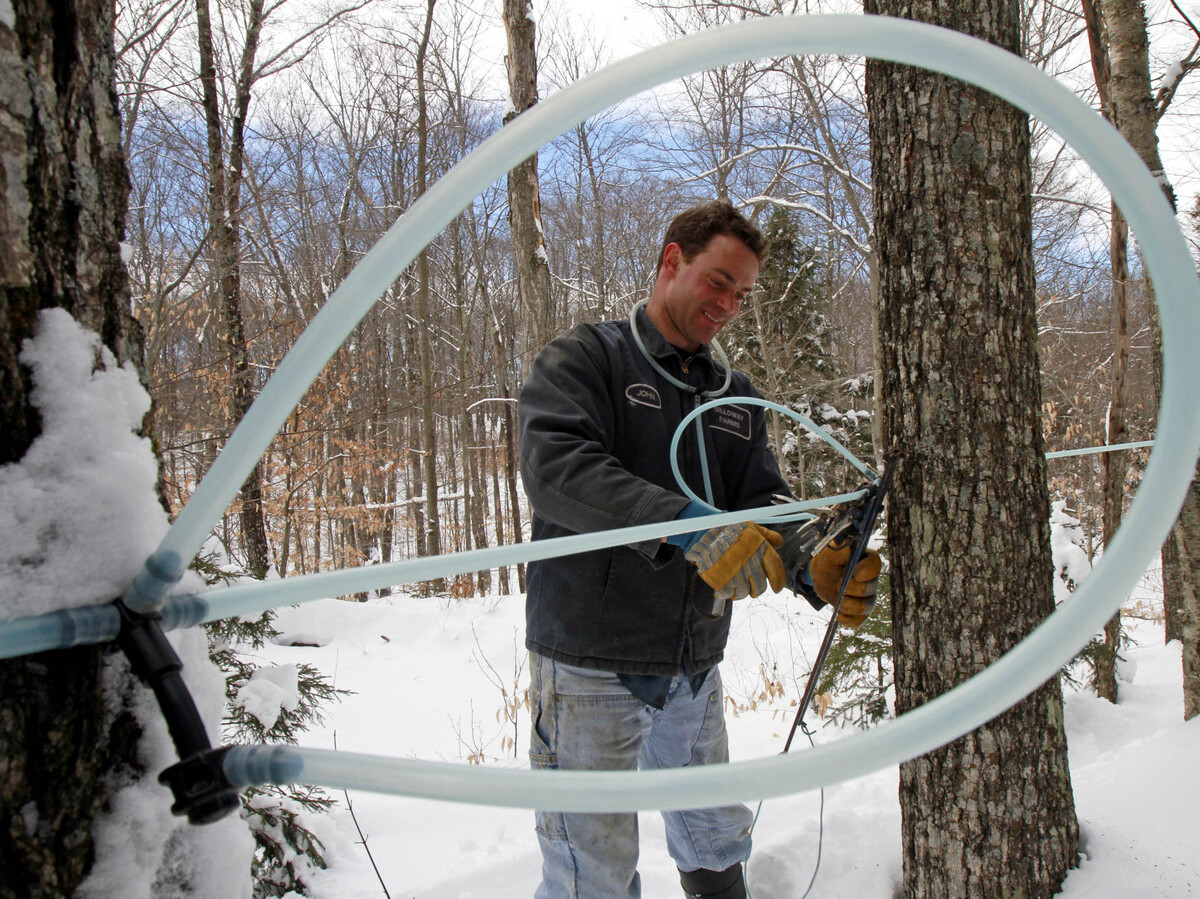 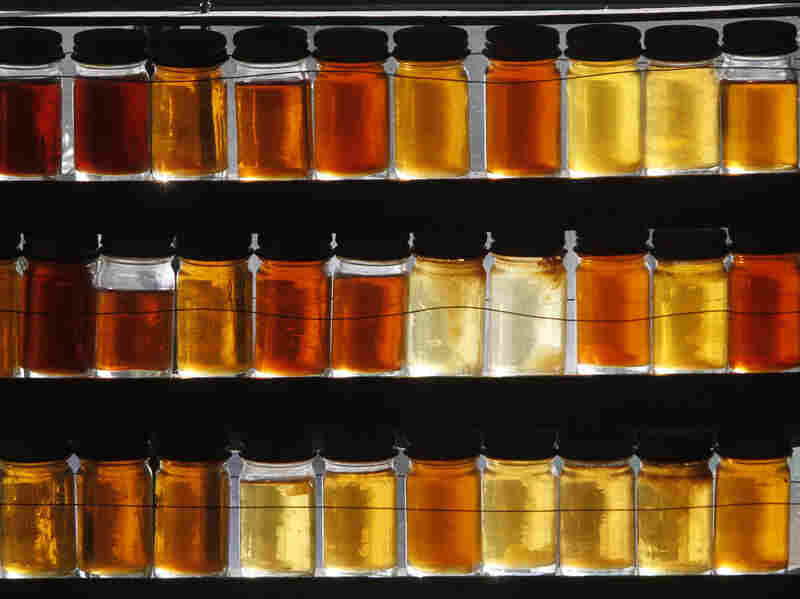 In Vermont, maple syrup is growing jobs and allowing farmers to make a profit.

When most people imagine maple syrup production, they think of buckets hanging from trees collecting sap. But these days, most of that sap is collected by pipeline and vacuum pumps.

Technological advances in the past decade have allowed Vermont's maple syrup producers to triple the number of taps they're putting in maple trees. They're getting twice as much sap per tree, which means more syrup and more money. Statewide, the crop brought in $40 million last year, doubling in value in just six years.

At J.R. Sloan's sugarhouse in Fletcher, Vt., sap arrives in tanks on the back of huge trucks, where it's pumped underground into tubs. It's a model of efficiency. Years ago, producers had to boil all of the water out of sap to concentrate the syrup. Now, sap is sent though reverse osmosis machines, which filter most of the water out before boiling begins.

"See what he's pulling off the rig right there? That's fancy," Sloan says. "That's our best product you can make. That's the highest money."

Sloan started out tapping 14,000 trees in the spring, even as he worked a full-time job. He was taking a chance when he built his sugarhouse. "That cost $117,000 to build that, with all the equipment. And the first year, I grossed $239,000," he says. "Syrup went wicked high that year. I got into it at just the right time."

Sloan works on his sugaring business year-round, including tapping trees and running pipelines for other landowners. He hopes to make 32,000 gallons of syrup this year. Like most of the syrup made in Vermont, it will be sold in bulk.

Sloan isn't alone in making maple his primary source of income. Vermont now has 3,000 commercial maple producers — up a third in just a decade.

Even some dairy farmers who once sugared on the side have decided to sell their cows and focus on maple. One of them is Cecile Branon at Branon Family Maple Orchards. When she and her husband first started sugaring, they used horses and buckets.

"We miss our horses and stuff, and that whole feeling of horses and the tradition," Branon says. "But to make it, to watch your labor and your time and efficiency, you've got to go with tubing, with a mainline system."

Now the Branons and two sons tap 66,000 trees. She says they've bought over a $100,000 worth of high-tech equipment to handle that volume of sap.

"There's people that are getting into it feeling that this is a get-rich type of thing," she says. "It's not. The investments that you have to make are unbelievable."

And the sugarhouse has not only gotten bigger, it's been redone to meet food safety standards. They've switched to new taps that prevent the holes in trees from healing up, extending the season. Vacuum pumps also allow sap to flow even as the spring weather that sugarmakers depend on becomes less predictable.

Weather and climate change will always be a concern, but even last year, when Vermont had 80-degree days in March, producers made more syrup than in most previous years.