Accessibility links
A Legal Twist In The Effort To Ban Cameras From Livestock Plants : The Salt Legislation introduced in several states would require anyone who records evidence of animal abuse to turn it over to authorities within a set period of time. But animal rights activists aren't welcoming these measures: They see the bills as veiled attempts to stifle long-term undercover investigations that can prove a pattern of abuse. 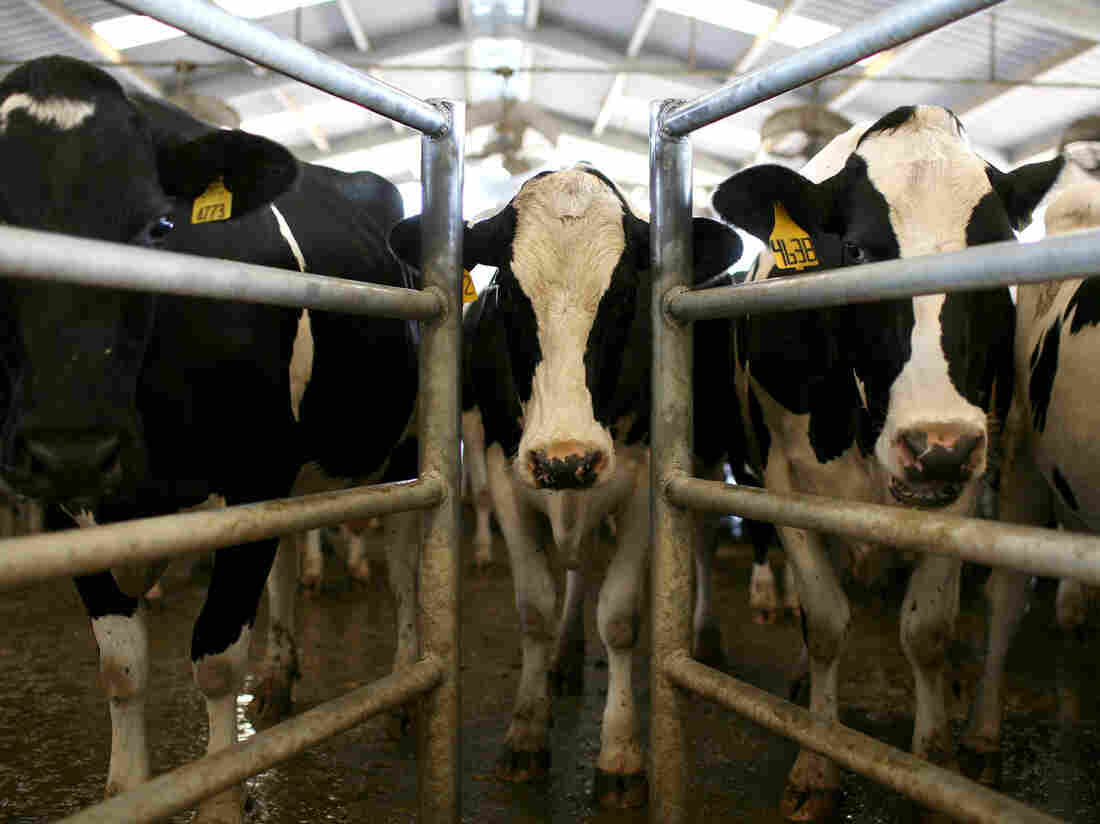 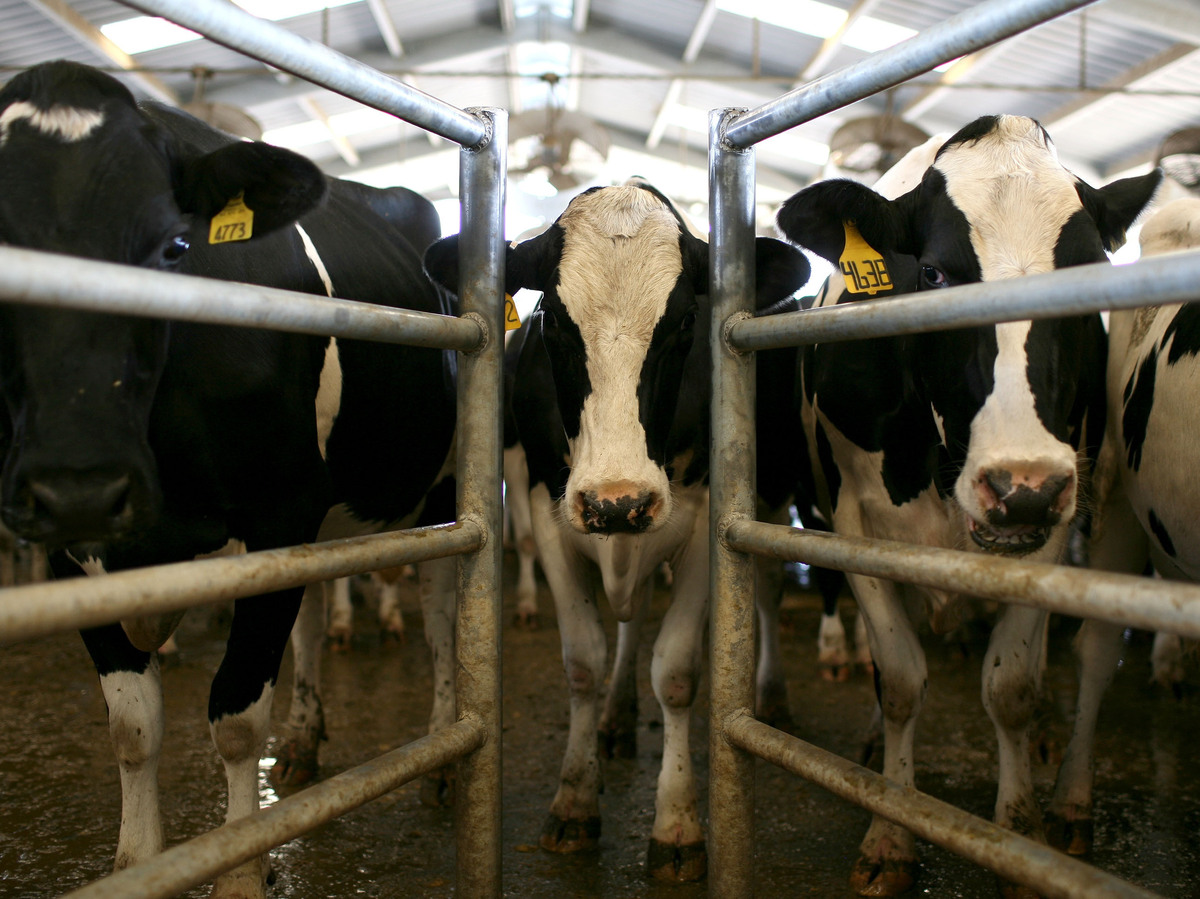 Cows wait to be milked at a California dairy farm.

For years, undercover videos documenting animal cruelty at farms and slaughterhouses have cast the nation's meat and dairy farmers in a grim light.

In response, the livestock industry supported legislative efforts in multiple states designed to keep cameras from recording without permission in livestock plants. The Salt reported on these efforts, which activists call "ag gag" bills, last year.

But recently, the livestock industry seems to have taken a sharp turn in its legislative tactics.

Consider Assembly Bill 343 in California. Introduced in February, this bill would not prohibit a person from seeking employment at a slaughterhouse under false pretenses, which Iowa and several other states have outlawed. Nor would it forbid anyone from using a hidden camera while on the job, which Utah recently made illegal. All that AB 343 would do, in fact, is require that anyone who videotapes or records animal abuse turn over a copy of the evidence to police within 48 hours.

It sounds like the type of bill that animal welfare groups would welcome — but it isn't. Rather, these groups have branded AB 343 as simply a new, and subtler, attempt to stifle undercover investigations of animal cruelty.

"The 48-hour time limit is a new twist to stop people from compiling information," says Amanda Hitt of the Government Accountability Project, a Washington, D.C.-based group that helps investigate reports of animal abuses.

According to Hitt, in order to prove that a serious animal abuse problem is occurring, undercover investigators must gather lengthy documentation. "You can't prove that animal abuse is systemic and recurring through one snapshot or video of an abused cow," she says.

For this reason, says Matt Rice of the group Mercy for Animals, "the last thing we want to do is go to law enforcement at the first sign of animal abuses."

But Justin Oldfield, of the California Cattlemen's Association — AB 343's sponsor — says the bill only intends to protect animals. Rather than allowing witnesses to keep quiet while they continue to film or photograph, Oldfield says, the bill mandates prompt reporting. He says that requirement will allow enforcement agencies to take swift action at the first indication of abused animals.

But not everyone trusts that authorities will respond to such reports of abuse in the absence of uninterrupted undercover investigations lasting weeks or months.

Taimie Bryant, a professor at UCLA School of Law who focuses on animal law, tells The Salt that public prosecutors tend to prioritize types of crimes other than those involving animal cruelty.

In the past, videos shot by the Humane Society of the United States and turned over to federal prosecutors have resulted in quick action and the filing of charges, The New York Times recently reported.

In the case mentioned by The Times, charges were filed before the undercover video was made public. But that's uncommon in animal-related cases, according to Bryant. She says legal action usually only occurs if there is media coverage, public outrage and pressure to prosecute.

"Public response [to livestock abuse videos] and clamor are what usually moves these types of cases up the ladder of priorities and motivates prosecutors to take action," she says.

Even in court, judges are often easy on defendants "if the evidence of animal abuse is thin," Bryant says.

In 2009, Mercy for Animals publicly revealed seven weeks' worth of footage recorded at the Willet Dairy in Locke, N.Y. The videos show employees cutting off cows' horns and tails without using anesthesia. Bellowing calves are seen dragged by the legs away from their mothers. At least one worker was recorded digging his fingers into a struggling calf's eye socket. Eventually, an employee named Phil Niles was fined several hundred dollars on a misdemeanor animal cruelty conviction.

The Cayuga County district attorney who handled the case, Jon Budelmann, tells The Salt that Niles' conviction was based largely on footage that showed Niles hitting a cow on the head with a wrench. Other events and images recorded at the Willet Dairy might also appear cruel to some outsiders, he says. But those events did not provide grounds for criminal prosecution, because "they were considered normal within the industry," Budelmann explains.

Occasionally, federal meat inspectors do speak up for animals — but their superiors don't necessarily listen.

Take the case of USDA veterinarian and slaughterhouse inspector Dean Wyatt. In 2010, Wyatt testified before a House subcommittee that, on several occasions, he was either overruled or threatened with demotion or transfer after he told superiors about instances of extreme animal abuse he'd witnessed.

Wyatt said he'd seen employees butchering live animals at both Bushway Packing, a veal plant in Vermont, and at Seaboard Foods, a pig slaughterhouse in Oklahoma.

"He went up the chain of command reporting violations [at the Bushway veal slaughterhouse in Vermont], and they did nothing until the Humane Society [of the United States'] video came out," says Hitt with the Government Accountability Project.

California's AB 343 is scheduled to be heard by the state Assembly on April 17. Tennessee, Vermont and Nebraska are also now considering legislation that includes clauses with time limits on turning over recordings of animal abuse.

If these bills become law, they could eliminate the only source of oversight available at dairies and feedlots, warns Bryant at UCLA. She says that federal inspectors assigned to oversee animal welfare only work at slaughterhouses.

"But for dairies and feedlots," she says, "these undercover videos are all we have."