Accessibility links
'Modern Art Desserts': How To Bake A Mondrian In Your Oven : The Salt Caitlin Freeman is an artist who uses sweet confections as her primary medium. Her desserts are clever culinary homages to the great works of art that hang at the SFMOMA.

As an artist, Caitlin Freeman found her calling in cake.

Freeman started out wanting to be an art photographer. But one day, while still in art school, she came across Display Cakes, artist Wayne Thiebaud's 1963 painting of frosted confections, during a visit to the San Francisco Museum of Modern Art. The image was so arresting, it stayed with her for years, and later inspired her to set off on a completely different career path: baking.

"I wasn't really sure what I loved about [the painting], but I really just became obsessed with cakes," Freeman tells The Salt.

Over the past several years, Freeman has made a name for herself by crafting desserts inspired by the great works of modern art on display at SFMOMA. She sells these edible art bites at the Blue Bottle Coffee bar, the cafe she and her husband, Blue Bottle founder James Freeman, operate inside the museum.

The project started as a cake-with-your-coffee concept. Appropriately enough, one of the first modern art sweets she put on the menu was an homage to Thiebaud. These days, she has a full menu of desserts — and some savory items, too — that gets updated as often as new art exhibits rotate through the museum. 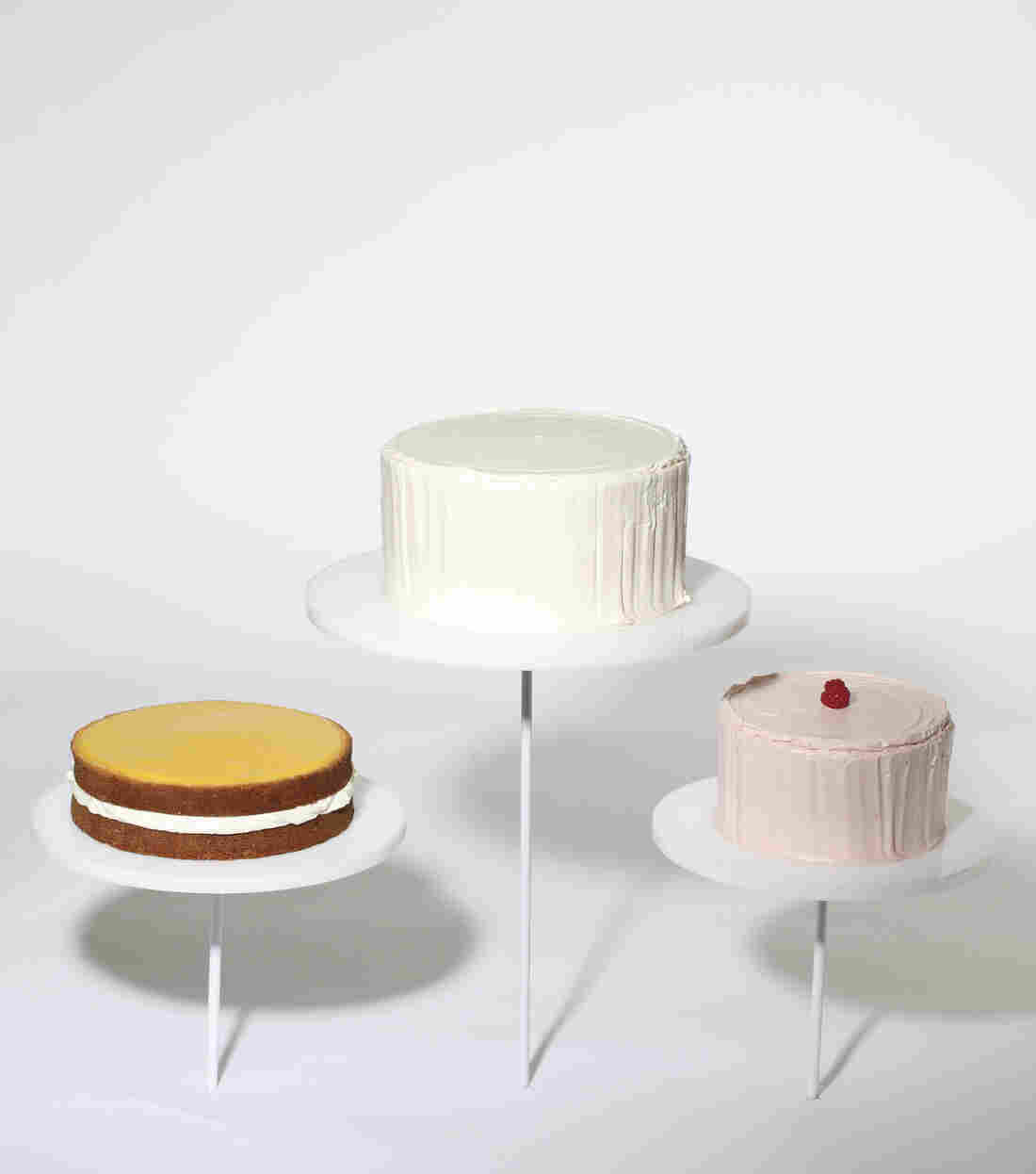 "When we started thinking about other artwork to base desserts on, I didn't want to re-create things," Freeman says. "I didn't want to splatter frosting on a cake and have it look like a Jackson Pollock. I wanted to reinterpret it somehow."

The results have been so popular with museum visitors that curators now include Freeman early in the process of planning new exhibits.

Freeman and her team of two (a pastry chef and an assistant) seem to find inspiration and play with form in much the same ways as the artists whose works hang on the walls.

"I think that's so much of what being an artist is," she says. "They're inspired by something and they keep delving. And our thing is art."

In their hands, the bathing suit pattern in a beach portrait from photographer Rineke Dijkstra becomes a striped icebox cake. A layered trifle echoes the horizontal lines of color in Ocean Park #122 by Richard Diebenkorn.

And then there's the cafe's most popular item, a dessert inspired by the art of Piet Mondrian, featuring geometric blocks of white velvet cake, colored red, blue and yellow, stacked together and "glued" with chocolate. In her new book, Modern Art Desserts, which came out this week, Freeman details how to make this signature confection: It's a two-day effort involving four separate cakes and assembly blueprints.

So what's it like to have your art turned into dessert? Freeman says feedback from the featured artists has generally been positive — even enthusiastic.

Artist John Zurier, she says, would often stop by to enjoy a strawberry and mint-cream popsicle inspired by his painting Arabella. And Freeman once snapped a picture of famed conceptual photographer Cindy Sherman taking a cellphone photo of a dessert inspired by one of Sherman's photographs. (Talk about meta.)

As for Thiebaud? "From what I've heard, he's kind of charmed by what we do," Freeman says.

Freeman and her team have made about 70 menu items so far; the book explains how to make 27 of them. But only a few confections, like the Mondrian and Thiebaud cakes, are mainstays on the cafe's menu.

"Our rule is that we only make things for the cafe that are on display at the museum. That means things are always changing, things are always coming up and coming down, and so it's really pushed us" to keep constantly innovating, she says. "We're not able to get lazy and have the greatest hits on the menu."

The SFMOMA will soon close for renovations for three years. Until the museum and café reopen, you can find Freeman online at her blog, Modern Art Desserts, telling the stories behind her work-of-art desserts.