Accessibility links
Science In A Scoop: Making Liquid Nitrogen Ice Cream : The Salt The days of made-to-order ice cream are far from over in San Francisco. A small shop that operates out of an old shipping container uses liquid nitrogen to freeze ingredients together in about a minute for an ultra-fresh, ultra-smooth treat. 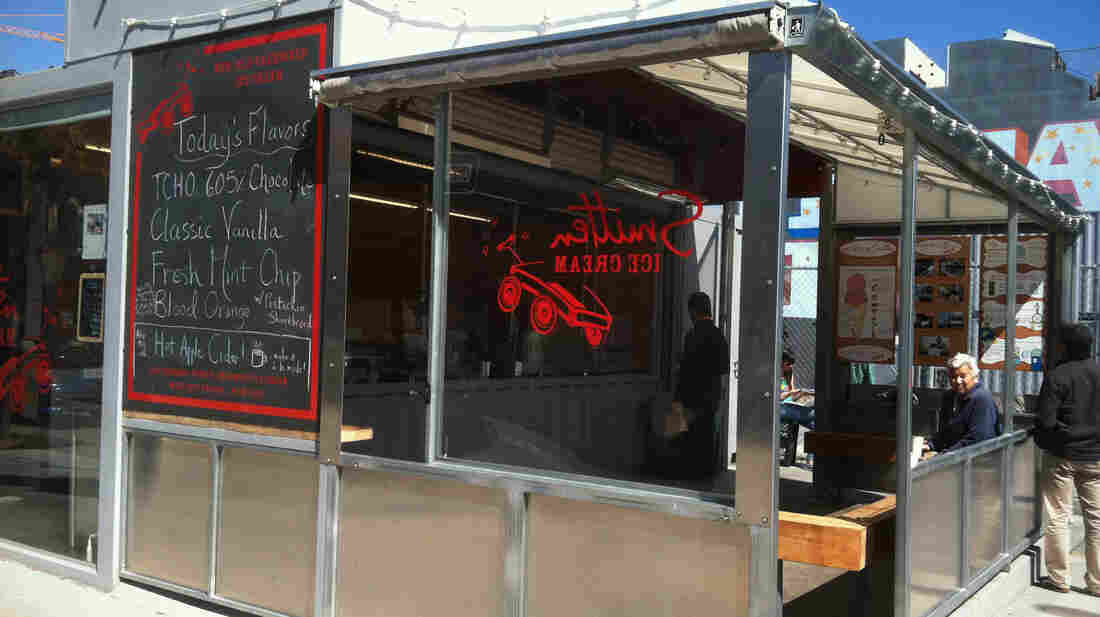 The Smitten Ice Cream shop in the Hayes Valley of San Francisco serves fresh ice cream with one novel ingredient: liquid nitrogen. The shop is located inside of a repurposed shipping container. Alan Greenblatt/NPR hide caption

Nitrogen is "a natural element," she notes. "It's all around us."

What makes it essential to Smitten is the ability to make ice cream fresh to order. You walk up and ask for a chocolate, or a blood orange with pistachio. The liquid nitrogen freezes the ingredients together, and your cup or cone is ready about a minute later.

Because servings are made on the spot, each one requires just a few ingredients. Normally, ice cream needs gums, egg yolks or other stabilizers and emulsifiers to keep it frozen on its months-long journey from manufacturer to distributor to store to your home freezer.

The mint chip, for example, contains just organic cream and milk, mint and a dash of salt. The first lick is like biting into a mint leaf.

"This is the best ice cream I ever had," says my son, who is only 7 but already an experienced ice cream taster, as he spoons his way through an order of chocolate. 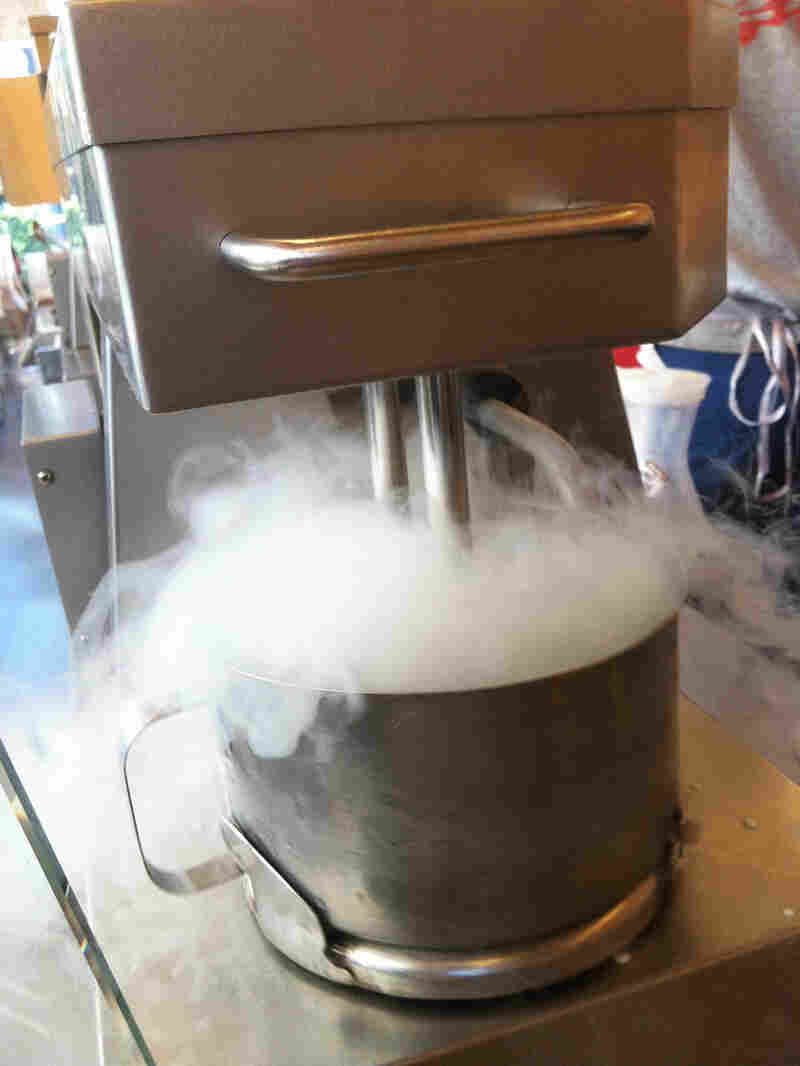 The store uses a patented machine to keep ingredients churning and mix in the liquid nitrogen in a safe, controlled manner. Alan Greenblatt/NPR hide caption 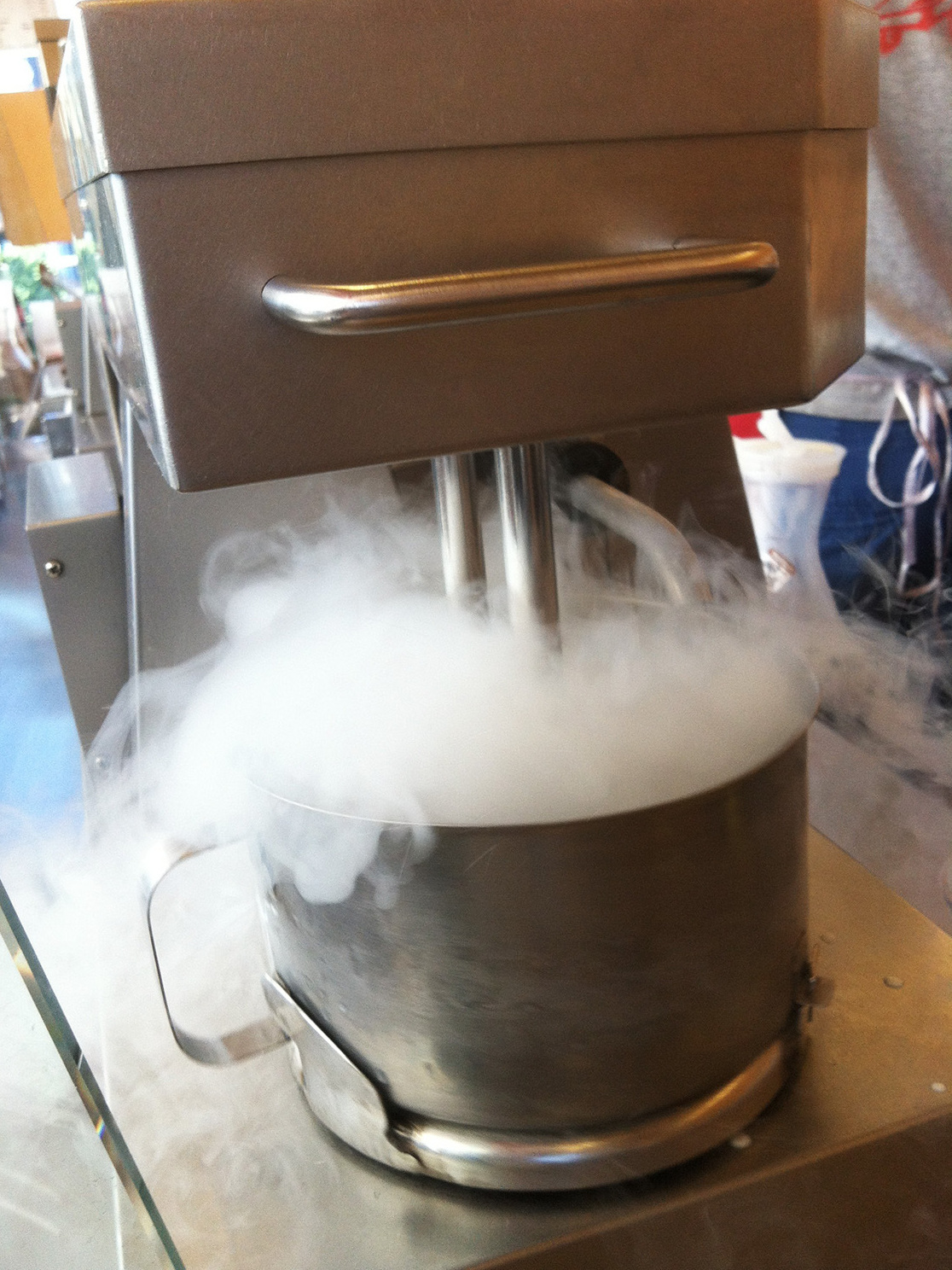 The store uses a patented machine to keep ingredients churning and mix in the liquid nitrogen in a safe, controlled manner.

He's not alone in his opinion. At the end of a recent Saturday afternoon that was sunny but not particularly warm, there was a steady line of people eager to order at Smitten, which is located in a repurposed shipping container.

Smitten charges a buck an ounce, but a small amount of the ice cream is rich enough to satisfy.

"Knowing there are only a few ingredients makes me feel like I can indulge," says customer Claire Kensington, the founder of a food, fashion and sex website, who'd returned two days after her last serving for some more mint chip.

Of course, there's nothing new about making ice cream with liquid nitrogen. In fact, cooking with the stuff has become so trendy lately that Wired felt inspired to put together this how-to guide. (As we reported last year, sometimes these culinary experiments can go dangerously wrong.)

At New York's Eleven Madison Park, guests brought back to the kitchen after dinner are treated to an apple-and-brandy cocktail topped with a frozen dome of foam fashioned with liquid nitrogen.

"It gives us the opportunity to do a little performance before the guests that's really easy and quick, and at the same time entertaining," says Angela Pinkerton, the restaurant's head pastry chef. "Liquid nitrogen is fun to watch, and everyone's curious about it. It looks cool."

It does look (and feel) cool when clouds of vapors come pouring out of the metal containers where the ice cream's stirring at Smitten. Fisher started serving ice cream out of a kid's red wagon back in 2009. She spent years developing a patented machine that keeps her ingredients churning in a safe, controlled environment. (She goes into some of the techie details in this video.)

The stirring, along with the minus 321 F temperature of the liquid nitrogen, keeps ice crystals from forming and is responsible for Smitten's smooth texture, which my son likens to a cross between standard-issue ice cream and whipped cream.

"Because it is a different texture than any other ice cream," says Kensington, "it feels like a new experience, like a new treat."