Accessibility links
Journey Of A Specialty Coffee Bean, From Cherry To Cup : The Salt That tasty cup of java from your favorite gourmet coffee shop began life on a farm thousands of miles away. Farmers who cater to the specialty coffee market compete on quality. And some use the higher prices their beans fetch to reinvest in their businesses and improve conditions for workers.

When we wanted to know how the growth of the specialty coffee movement is influencing the lives of farmers, we took a trip to the mountainous region of Huehuetenango in Guatemala.

Here, we met farmer Miguelina Villatoro, owner of Finca El Paternal. If you listen to my radio story, you'll hear how she has salvaged a family farm by maximizing the quality of her beans and entering into a direct trade deal with Portland Roasting. 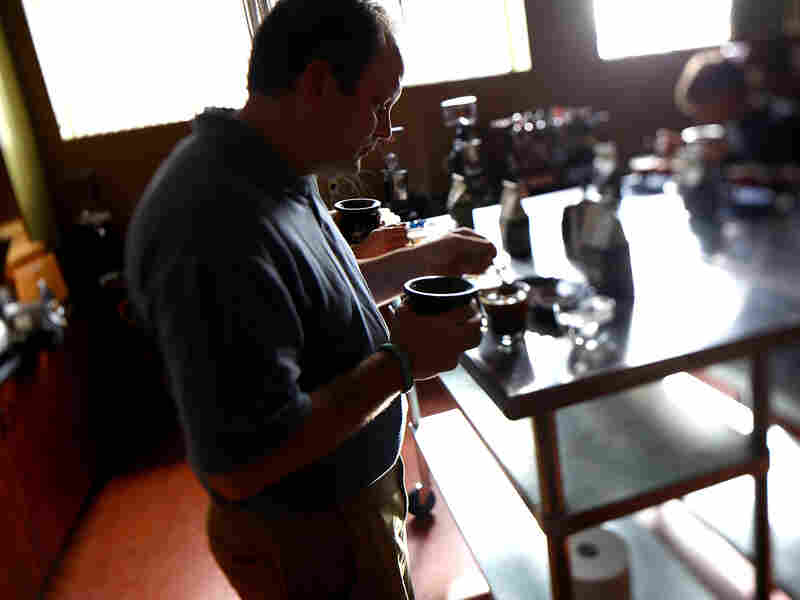 At a time when the global commodity price of coffee has sunk to about $1.40 a pound, Villatoro is getting $2.50 per pound for her coffee.

And this kind of premium is typical for farmers catering to the specialty market, who compete on quality. The premium she's getting for her beans allows her to reinvest in the farm and improve conditions for her workers. One recent improvement: She has added water filters to boost the quality of workers' drinking water. And the workers' living quarters on the farm now have a stove with a chimney — small luxuries.

The relationship between Villatoro and Portland Roasting began with a dramatic landing by helicopter at her farm nearly 13 years ago. Mark Stell arranged the visit as part of a tour where he scoped out lots of farms. In the end, he was impressed with the quality of her coffee — which had just placed well at a tasting competition called Cup of Excellence.

"The quality is driving this [expansion of the specialty coffee]," says Edward Fischer, director of the Center for Latin American Studies at Vanderbilt University. And he says it's having a positive effect on workers and small producers in Guatemala.

The volume of coffee that Guatemala exports has either dropped a little or stayed level since 2001, he says. "And yet the revenues from coffee have gone up," says Fischer. This means that coffee producers are "earning more for the coffee they're exporting."

If you click on the slideshow above (the images shot by my colleague David Gilkey are beautiful), you'll see the incredibly labor-intensive process of producing coffee. Who knew that coffee plants produce cherries, not beans? Or that they've got to be milled not once, but twice to produce the green coffee that's ready for roasting?

So, next time you sip on a latte, remember: It's not just the face of the barista behind those coffee beans.

At Rain or Shine Coffee House in Portland, where customers pay upwards of 2 bucks for a coffee, owner Claire Teasdale says she wants her customers to know the stories about the farmers, like Villatoro, behind their cup of joe.

Knowing all the effort that goes into that cup "makes the whole experience of enjoying the coffee a little better," says Teasdale.

And increasingly, in this third-wave world, roasters and cafes aren't just selling us a good cup of coffee. They're also selling us the story behind it.