Accessibility links
Coffee For A Cause: What Do Those Feel-Good Labels Deliver? : The Salt It doesn't take much effort to find bags of coffee with labels that promise social and environmental improvements. But each one of these certification programs promises something different for the farmer and the land — and every promise involves some compromises. 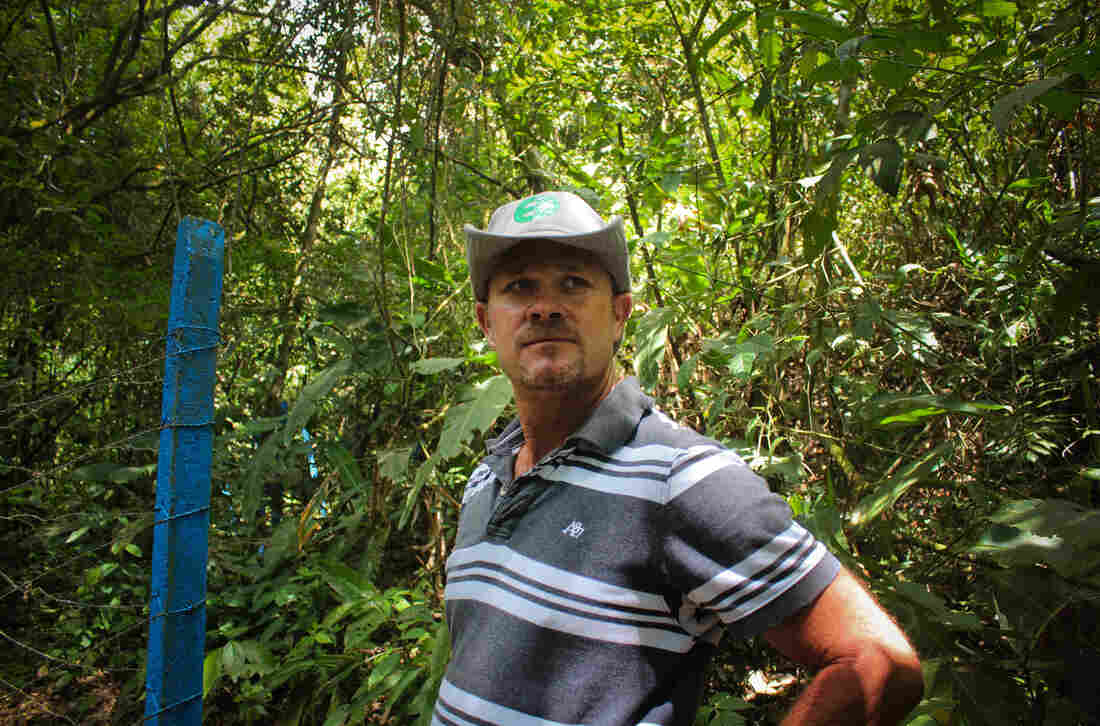 What does it take to find guilt-free coffee?

Much of our coffee comes from places where the environment is endangered and workers earn very little — sometimes, just a few dollars for a whole day's work. Coffee farmers have helped cut down tropical forests, and most of them use pesticides.

It doesn't take much effort, though, to find bags of coffee with labels that promise social and environmental improvements. Among the best-known are Fairtrade or Rain Forest Alliance Certified.

I went to Costa Rica to find out what those labels mean and how well they deliver on their promises.

I visited, for example, a hillside in the country's central valley, near the town of San Ramon, where Luis Fernando Vasquez grows coffee.

Vasquez loves showing off his farm, which also produces bananas and honey. He's lived here his whole life and learned to grow coffee from his father. But in the past few years, he says, he's changed the way he farms. 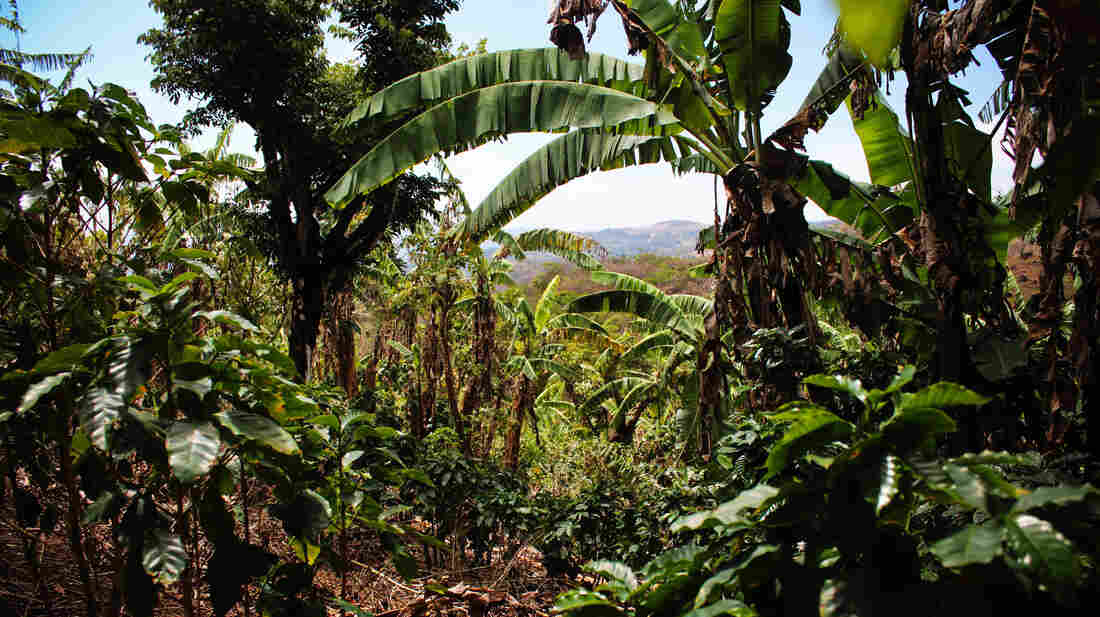 Luis Fernando Vasquez's coffee farm in Costa Rica. Vasquez says farmers have changed their methods in recent years. Where they once would cut down trees, he says, "now we are coming to understand that the tree plays a role" in a healthy coffee plant ecosystem. Dan Charles/NPR hide caption 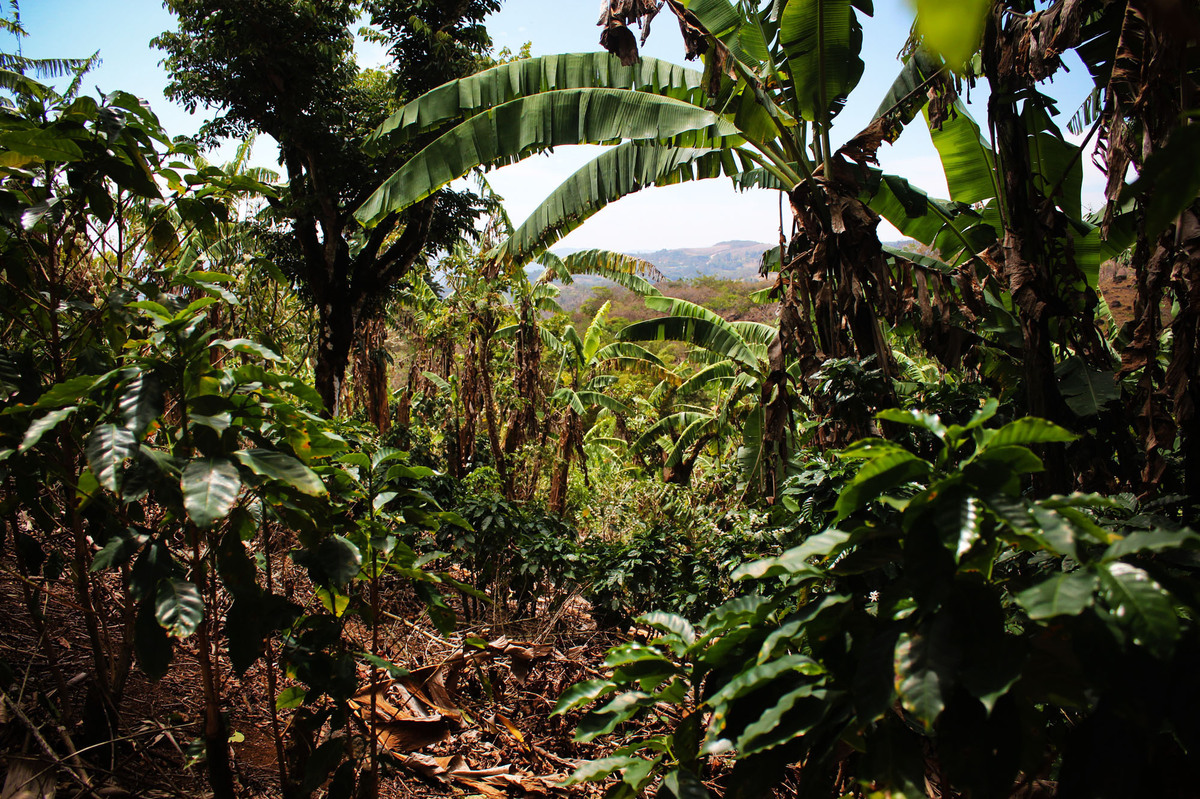 Luis Fernando Vasquez's coffee farm in Costa Rica. Vasquez says farmers have changed their methods in recent years. Where they once would cut down trees, he says, "now we are coming to understand that the tree plays a role" in a healthy coffee plant ecosystem.

"Before, a tree used to be an obstacle, and we'd just cut it down," he says. "Now, we are coming to understand that the tree plays a role, and it can coexist with our commercial coffee plantation."

Coffee plants that grow in the shade of trees produce fewer beans, but many people say those beans taste better. In addition, trees help reduce soil erosion and provide a home for wildlife.

Vasquez points at the ground, which is covered by a layer of dead, decaying leaves. "We used to pick all that up, bring it to one central point on the farm and then set it on fire," he says. "But now I know that if I leave it there, it will actually help improve soil fertility."

There also have been changes that I can't see: He's using fewer pesticides and recycling his trash.

Vasquez is enthusiastic about these changes, but they were not originally his idea.

They're the result of a long chain of decisions reaching all to way back to American consumers contemplating their many coffee options in the local Stop & Shop.

Several people who are part of that chain are also with me here on the farm.

Learn More About The Different Coffee Certifications Below

First, there's Sergio Gurdian, who works for ECOM Trading, the second-biggest coffee trader in the world. ECOM buys beans from farmers and sells them to big companies like Starbucks or Nestle.

Gurdian and his colleagues went to Vasquez and persuaded him to change his farming practices.

Why? "I think that the world is changing right now," says Gurdian.

To be specific, one of ECOM's big customers is changing. Nespresso, a coffee business owned by Nestle, has decided that it wants most of its coffee to carry a particular label: Rainforest Alliance Certified.

And Rainforest Alliance, the environmental group behind this label, has a whole set of rules for farmers, called the Sustainable Agriculture Standard.

ECOM took on the job of getting farmers onboard. "We said, 'OK, it's time to show the producers that sustainability is OK, and that we can offer lots of benefits, not only for them, the producers, but also for their farms," says Gurdian.

There was also a small financial incentive. Now that Vasquez, the farmer, is Rainforest Alliance Certified, he gets about 15 cents more for each pound of coffee.

There are other labels, of course: fair trade; organic; direct trade.

All of these labels promise slightly different things, and every promise involves some compromises.

For instance: Rainforest Alliance runs a relatively strict system, with independent auditors who inspect farms at random. If the auditors find prohibited pesticides, or workers earning less than the minimum wage, that farm can lose its certification. Sometimes, a whole group of neighboring farms also can be decertified.

You may be glad to know that the program has teeth. On the other hand, those rules shut out many of the smallest, poorest farmers.

Emilia Umaña, who also helps farmers get Rainforest Alliance certification, says the rules ask for things that are too expensive for many small farmers to buy — like special showers for workers to use after applying pesticides. "One of the biggest flaws in the system is that they use the same rule book, worldwide, for every type of producer in every company," she says.

If you're specifically interested in helping small farmers, maybe you should look for fair trade coffee. Its whole focus is small coffee producers. Traditionally, all fair trade coffee has come from cooperatives of small producers. 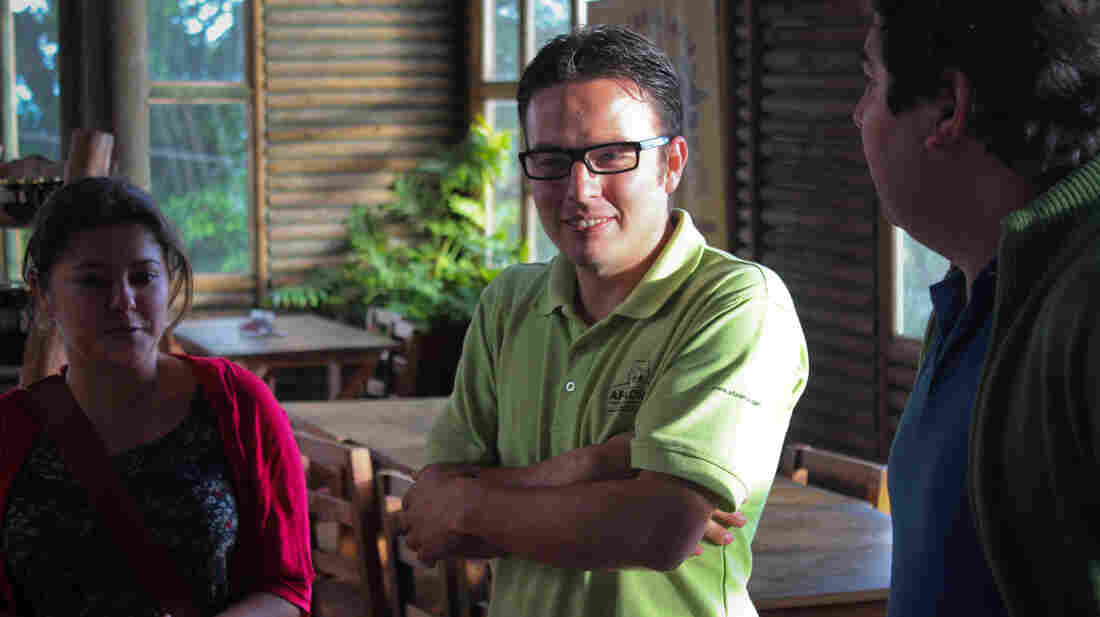 Christian Mora is general manager of one of these co-ops, called AFAORCA, in Costa Rica. It has just 24 members.

To get fair trade certification, he says, you have to show a fair trade organization that your cooperative keeps an honest set of books, that it operates democratically, and that it treats workers fairly.

"They come in and interview people who work in the coffee fields, and they make sure that salaries are fair, and that labor rights are respected, according to the law," he says.

Once certified, the cooperative gets 20 cents extra for every pound of fair trade coffee that it sells. The cooperative then decides how to spend that "social premium." It could pass the money on to its members, or do something else with it, such as improve a local school.

But there are compromises with fair trade, too. It doesn't focus primarily on environmental practices on the farms, and some buyers complain that fair trade coffee isn't always good-quality coffee.

At the moment, in fact, the fair trade movement is going through a bitter split. One group, Fair Trade USA, wants to expand the label so it can include coffee from individual farmers — even big estates.

Mora isn't happy about this expanded definition of fair trade. "It could be a problem, because the goal of the label gets lost, and it becomes more of a marketing tool for big businesses, and just makes it easier for them to sell their product," he says.

This tension — between trying to be a real alternative to the mainstream and joining the mainstream — comes up all the time in these certification schemes.

The toughest environmental certification is probably one called Smithsonian Bird Friendly coffee. This coffee is grown organically, with no manufactured fertilizer or pesticides, in fields that also contain 10 different kinds of shade trees. Only a few farmers, though, are willing to grow coffee this way. 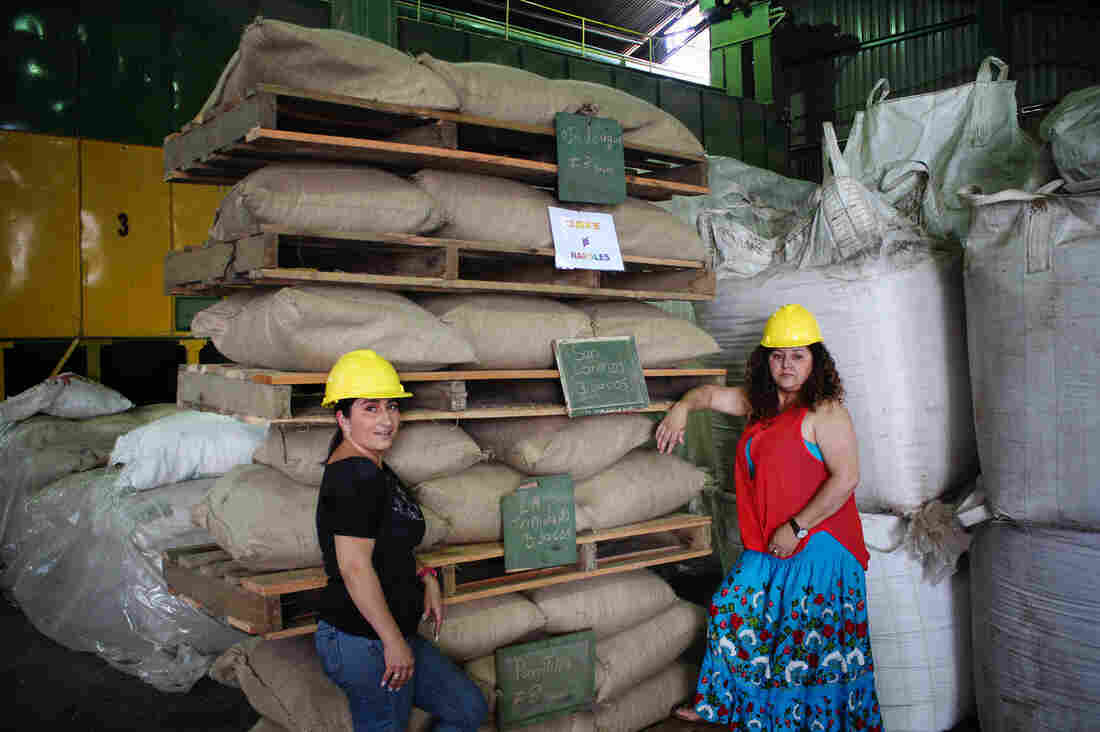 Angelina Zuñiga Godinez and Fanny Cordero Mora grow coffee for Coopetarrazu, one of Costa Rica's largest coffee cooperatives. These bags of coffee are labeled with the towns where they are grown Dan Charles/NPR hide caption

On the other end of the spectrum, Starbucks runs a really big program called C.A.F.E. Practices (Coffee and Farmer Equity Practices). Like Rainforest Alliance certification, this scheme includes both environmental and social standards, but the Starbucks audits aren't really tests that a farmer can flunk. They're more like counseling sessions. If farmers are doing something wrong, Starbucks will tell them how to improve, but it still buys their coffee.

Yet for all their differences and compromises, coffee producers in Costa Rica say these certification systems, collectively, have had a real impact.

Carlos Rivera Chavarria, general manager of one of the country's largest cooperatives, Coopetarrazu, says certifications all helped farmers to hear what consumers wanted, much more directly than ever before.

These programs allowed his producers to "rediscover quality coffee," he says.

Coopetarrazu sells coffee under the fair trade label. In addition, some of its farmers are Rainforest Alliance Certified, and the co-op sells a lot of coffee to Starbucks.

Now the co-op is experimenting with "direct trade." It's selling small lots of coffee from particular villages to roasters who can pass along the story of that coffee, and that village, to consumers who want to know even more about the sources of their coffee.

What's In A Certification?