Accessibility links
EU Embraces 'Suspended Coffee': Pay It Forward With A Cup Of Joe : The Salt About a century ago, a beautiful tradition emerged in the Italian city of Naples: Cafe-goers would buy a cup of coffee anonymously and in advance for a less-fortunate stranger. With much of Europe now in tight financial times, the custom is spreading across the continent. 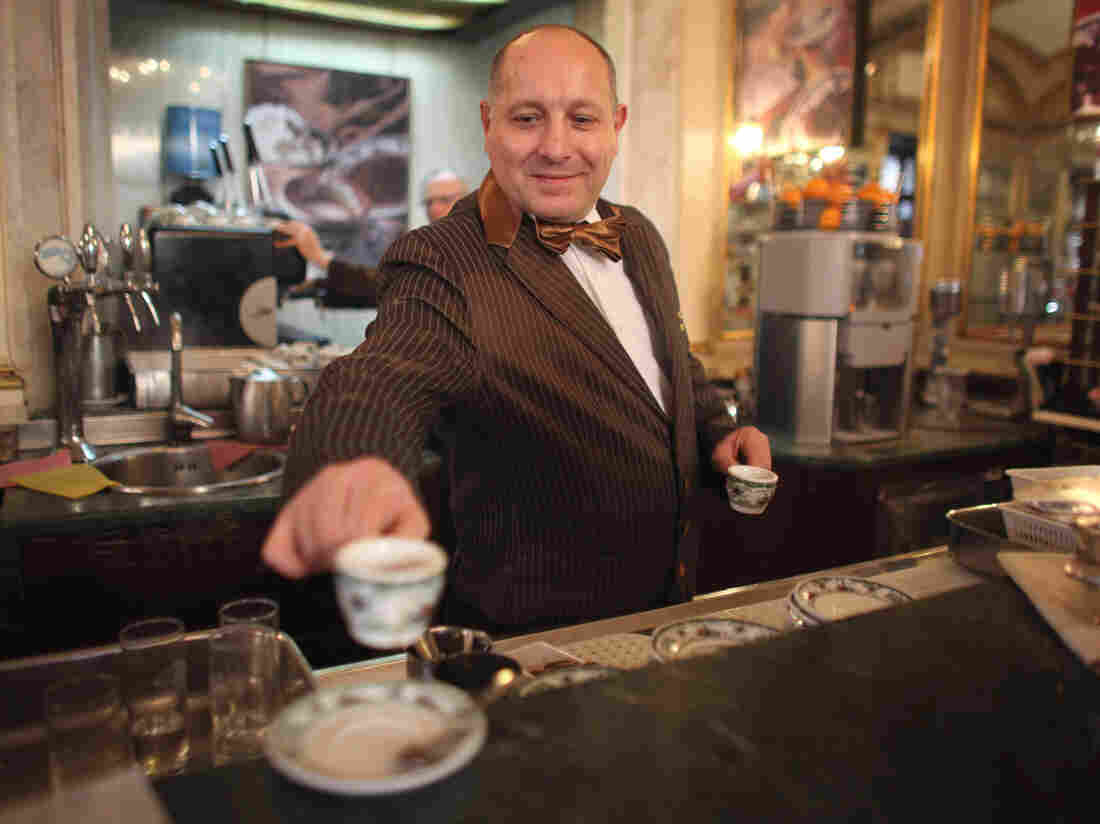 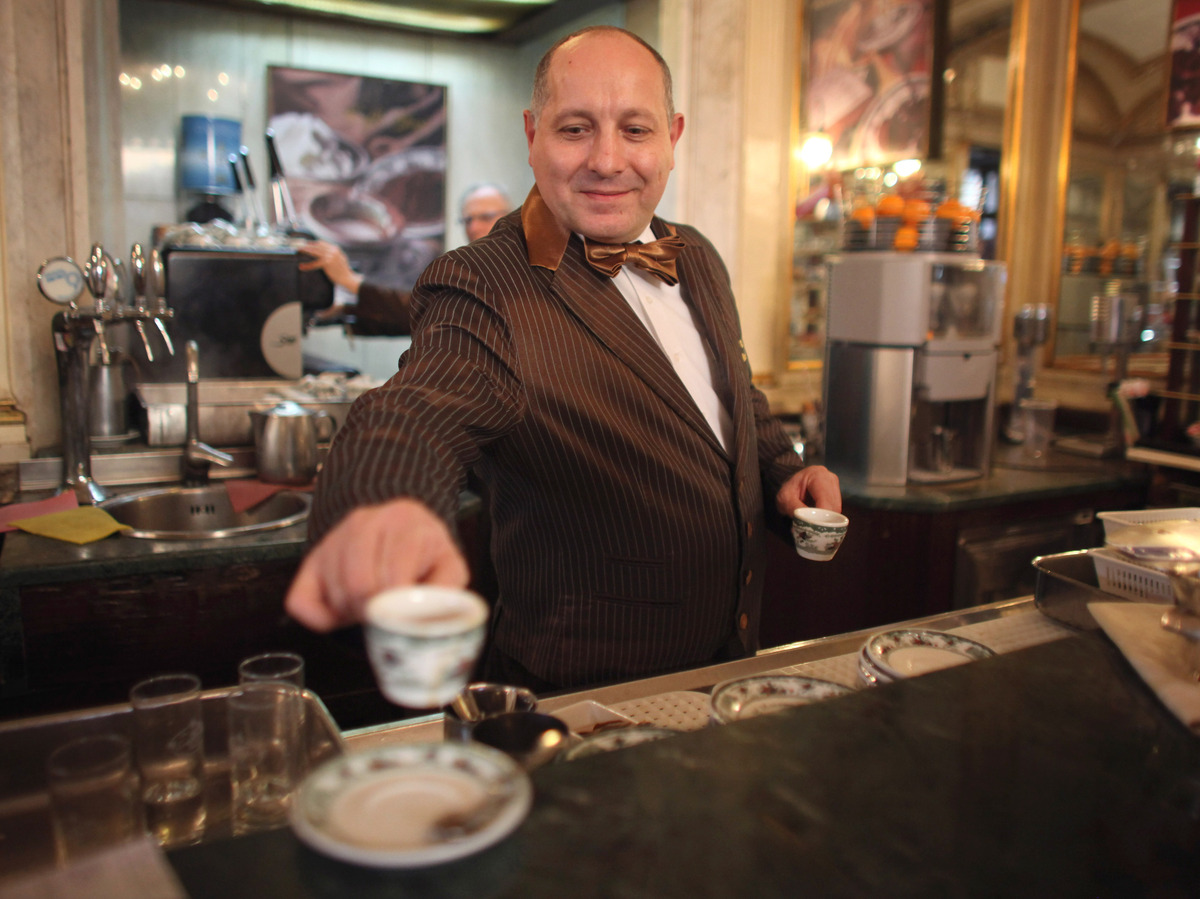 A barista serves coffee at a cafe in Naples, Italy. The Italian city's long-standing tradition of buying a cup for a less-fortunate stranger is now spreading across Europe.

Tough economic times and growing poverty in much of Europe are reviving a humble tradition that began some one-hundred years ago in the Italian city of Naples. It's called caffè sospeso — "suspended coffee": A customer pays in advance for a person who cannot afford a cup of coffee.

The Neapolitan writer Luciano de Crescenzo used the tradition as the title of one of his books, Caffè sospeso: Saggezza quotidiana in piccoli sorsi ("Suspended coffee: Daily wisdom in small sips").

"It was a beautiful custom," he recalls. "When a person who had a break of good luck entered a cafe and ordered a cup of coffee, he didn't pay just for one, but for two cups, allowing someone less fortunate who entered later to have a cup of coffee for free."

The barista would keep a log, and when someone popped his head in the doorway of the cafe and asked, "Is there anything suspended?" the barista would nod and serve him a cup of coffee ... for free.

It's an elegant way to show generosity: an act of charity in which donors and recipients never meet each other, the donor doesn't show off and the recipient doesn't have to show gratitude.

The writer says the tradition is part of the city's philosophy of life. "In other words, it was a cup of coffee," de Crescenzo says, "offered to the rest of humankind." It was a time, he adds, when there were more customers who were poor than those who were well-off.

It's fitting that the tradition started in Naples, a city that prides itself on having the best coffee in Italy. And in a country where the first coffeehouse in Europe opened in 1683 (in Venice), that is no small claim.

Before the likes of Gaggia and Cimbali started producing the modern commercial espresso machines, Italians made coffee at home on the stovetop with a coffee maker known as a Napoletana.

Naples and coffee are inseparable, but the caffè sospeso tradition waned as Italy entered the boom years of postwar reconstruction and La Dolce Vita. For decades, the custom was confined mainly to the Christmas season.

Now, it's made a comeback. Two years ago, with the eurozone crisis already raging, unemployment rising and small businesses closing on a daily basis, more and more Italians could no longer afford the national beverage — an espresso or a cappuccino. (According to the International Coffee Organization, which represents 44 coffee exporting countries, Italian per capita annual consumption of coffee has dropped to 5.6 kilograms, the lowest level in the past six years.)

Then someone remembered the old Neapolitan custom. So several nongovernmental organizations got together and — with the support of Naples Mayor Luigi de Magistris — Dec.10 was formally declared "Suspended Coffee Day."

The practice is now spreading to other crisis-ravaged parts of Europe.

In Bulgaria, the European Union's poorest country, where several desperate people have set themselves on fire in recent months, more than 150 cafes have joined an initiative modeled on the Neapolitan "suspended coffee" tradition.

And there is even a site that lists establishments that have joined the "suspended coffee" initiative — the countries range from the U.K. and Ireland and Hungary to Australia and Canada.

The prepaid cup of coffee has become a symbol of grass-roots social solidarity at a time of mounting poverty in what, until recently, were affluent Western societies.

But now, back to Naples, where coffee is not a luxury but is considered, more or less, a basic human right.

There's only one iron-clad rule: Cappuccino — which takes its name from the white and beige colors of the Capuchin friars' habits — is exclusively a breakfast beverage, and must never, never be consumed after 11 a.m. (OK, let's say noon).