Accessibility links
So Jerry Seinfeld Called Us To Talk About Coffee : The Salt After years of not understanding coffee, Jerry Seinfeld says he's finally discovered the delight of meeting someone over a cup. "You have coffee and for some reason it makes you talk a lot," he says. 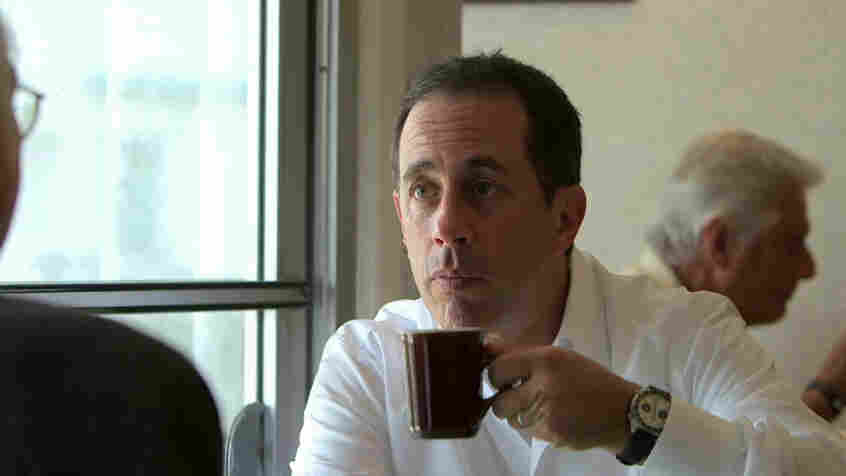 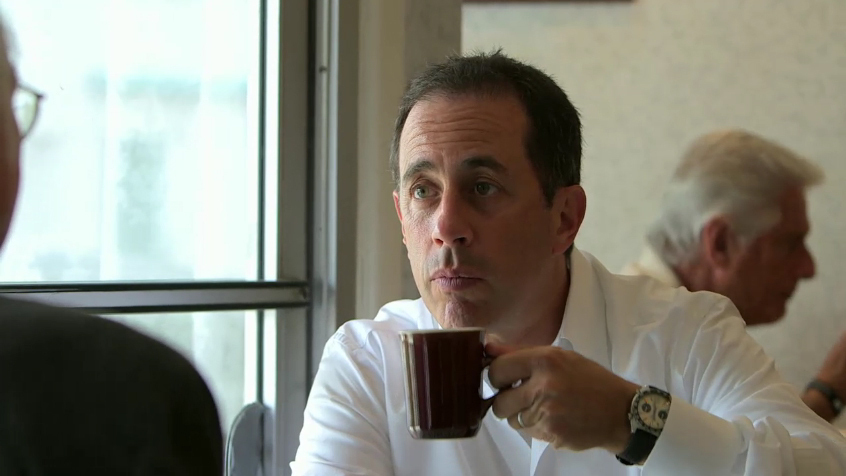 In an episode of Comedians In Cars Getting Coffee called "Larry Eats A Pancake," Jerry Seinfeld has coffee with Larry David.

According to Jerry Seinfeld's publicist, the comedian was listening to Coffee Week on Morning Edition and decided he had something to add. So he called up host Steve Inskeep. Here's what he shared, edited for brevity.

On his new coffee habit

"I just started. All those years on the TV series, whenever we would have a scene in the coffee shop, they would say, 'What do you want to drink?' and I would say, 'I don't care,' so they would just give me a cup of black coffee and I would just touch it. I never liked it and I didn't understand it and I used to do a lot of stuff in my standup set in the '80s and '90s about how I don't 'get' coffee. I don't understand why everyone's so obsessed with this drink. ...

"And then something happened about five years ago. I started touring a lot, and we would have these great big, fun breakfasts in the hotel and [coffee] just seemed to go really well with the French toast — the sugar and the milk — and it just seemed like the perfect French toast companion."

"I got married and I had a family and my entire day was not free for social interaction. And eating is annoying and difficult to arrange, [and it's] hard to choose places. And meeting someone for coffee suddenly seemed like a wonderful, compact, accessible and portable social interaction.

"You don't even really need a place. But you feel like you're doing something. That is what coffee is. And that is one of the geniuses of the new coffee culture."

On coffee as a morning toy

"It's legal. It's not expensive. And they have a whole world for you with all their little words. It's just something to do. My theory is 98 percent of all human endeavor is killing time. This is a great way to do it."

"I do a little thing about the way people shake the sweetener packet. You know, like they're all excited. I want to get all the granules down to one end. I love all these rituals."

On the best place for coffee

"I don't give a damn. That's the beauty of it. It doesn't matter. That's the nearest place. I'll meet you there. And you know what? Coffee's all good. It's all good. As long as it's fresh, it's good. And it's always fresh in New York. ... I think we're a more productive society as a result."

On which coffee to order

"I like it pretty basic. I've just started this espresso thing, but it's just milk and sugar. That's it. I don't want to talk that long to the guy or gal."

"I have that at my mother's in Florida at her condo. When she says, 'Do you want coffee?' And she had a — I think it was a Cuban packet — and I started rolling my eyes. 'Oh my God that's the coffee you have?' And she boils the water and opens the packet and puts it in there and you know what? It was pretty good."

On the secret to really enjoying coffee

"You want the sophistication of the snob without the pretension of the snob. So you want to know what's going on, but don't be a fussbudget about it. You know what I mean?

"When you go into Three Guys Coffeeshop on Columbus, don't complain that it's not as good as Gimme Coffee or Mudd or one of these places. Appreciate that for what that is. Know the difference, but don't be a pain in the ass about it."

On why coffee is so central to our culture

On his show Comedians in Cars Getting Coffee

"I really wove the idea of this little show that I'm doing on the Internet around this concept. I saw it as this swirling social hub of activity that was so handy and useful. That whole description of why it's great to meet someone for a cup of coffee — the ease, the simplicity, the compactness. And that it also obviously gets people talking. You have coffee and for some reason it makes you talk a lot. And I thought this is an interesting thing to try and capture. So that was my ambition of this little experiment — let me see if I can capture that energy of two people that are already quite voluble — they're comedians — and then you give them coffee — you caffeinate them, and then maybe that's a show.

"After a lifetime in formal show business, I kind of had a theory that if you remove the structures of show business — the studio, the makeup, the microphone, the can we get you something to drink, the chair that you're screwed into — if you remove that, you'll get a different tone, a different dialogue. I wanted to get the dialogue that when you're standing on the sidewalk and you're kicking the curb and you're with a friend and neither of you really wants to go home and you're just standing there talking. That conversation, I thought, that's a 'talk show' that I'd like to try and see if I can get that in a bottle."