Accessibility links
Why An Immigration Deal Won't Solve The Farmworker Shortage : The Salt Many farmers are cheering government proposals to give thousands of seasonal farmworkers a path to legal status. But even if the bill passes, it won't solve the long-term trend of fewer migrants coming north to work on U.S. farms. Farmers will instead have to learn how to do more with less immigrant labor. 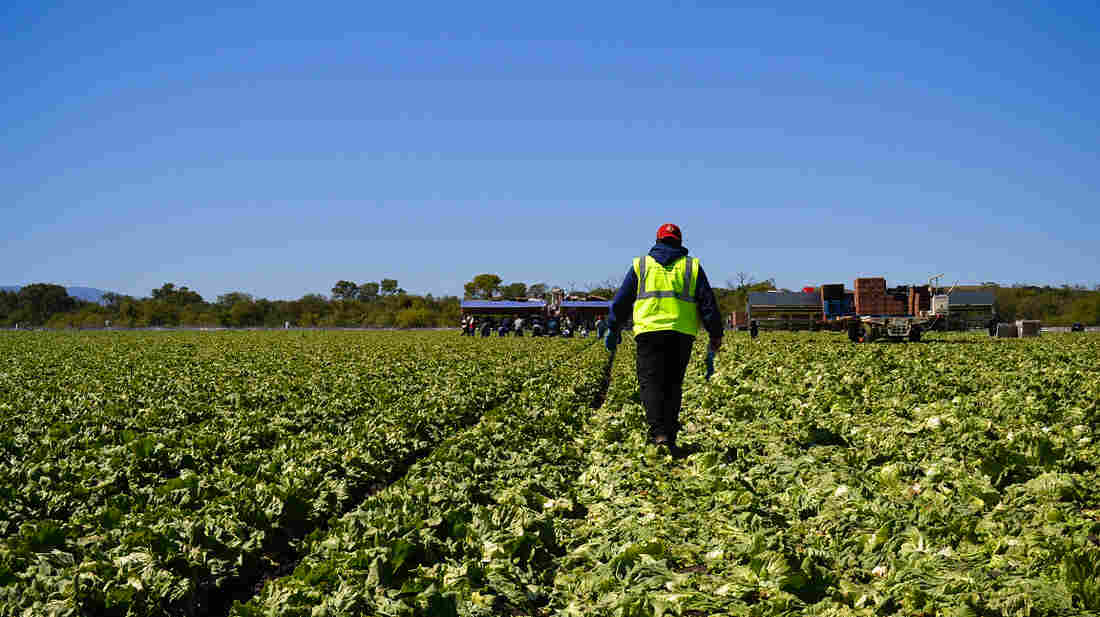 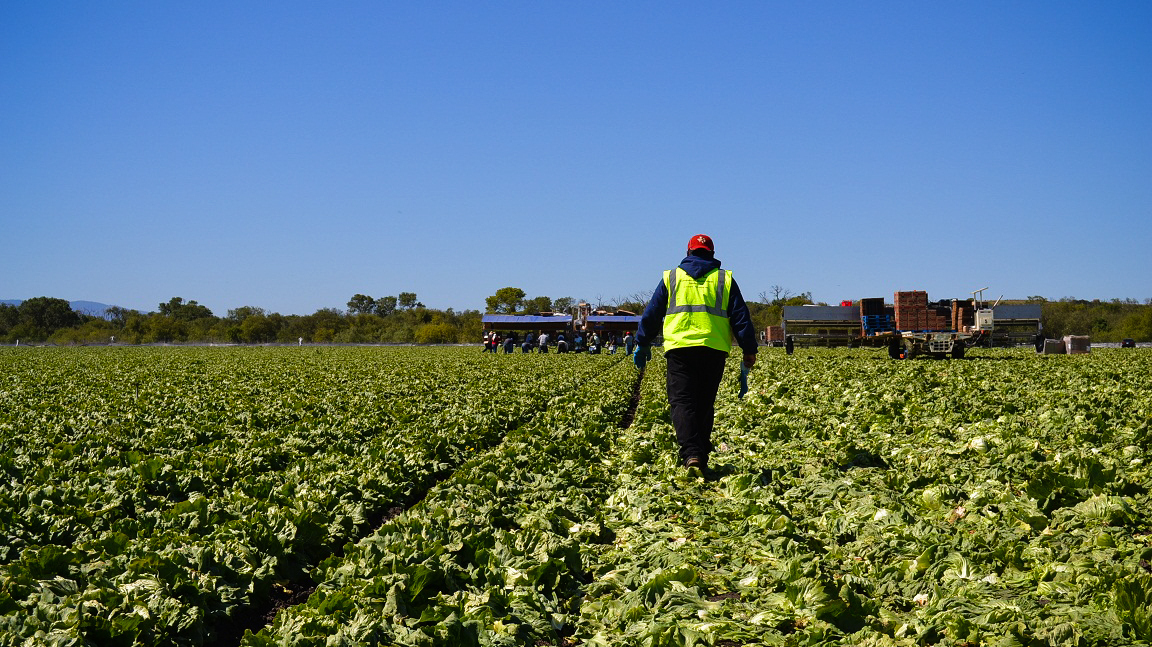 American farms like this iceberg lettuce field owned by Duda Farm Fresh Foods outside Salinas, Calif., are facing a dwindling supply of farmworkers from rural Mexico.

The Salinas Valley in Northern California grows about 80 percent of the country's lettuce, and it takes a lot of people to pick and pack it. In a field owned by Duda Farm Fresh Foods, a dozen lechugueros, or lettuce pickers, are bent at the waist, cutting heads of iceberg lettuce. They work frantically to stay in front of a line of 12 more packers, who seal them with tape and toss them onto a conveyor belt.

"There's a lot more going on here than meets the eye," says Sammy Duda, the company's vice president. "The way the lettuce is trimmed is much more difficult to do if you don't trim it properly."

Duda hires 1,000 or more field workers every harvest, paying them about $12 an hour. Many don't have papers, but Duda says he has no other choice. Hardly any Americans apply for these jobs, he says, and most who do, don't stay.

"This has always been an immigrant job, whether it's, like I say, back from the Dust Bowl group," Duda says. "This is not a new phenomenon."

Labor shortages aren't a new phenomenon, either, in this valley made famous by John Steinbeck. But things have gotten worse lately.

A lot of the migrant workers who came from rural Mexico are getting too old for this back-breaking work, and their kids don't want to do it at all.

"It's hard, because I've been working in the fields for like 12 years now," says 29-year-old Marco Lara.

He says many of his extended family and friends back in his native Mexican state of Michoacan don't want to cross the border right now. Hiring a "coyote" costs a lot more than it once did, and the border is a lot more dangerous. 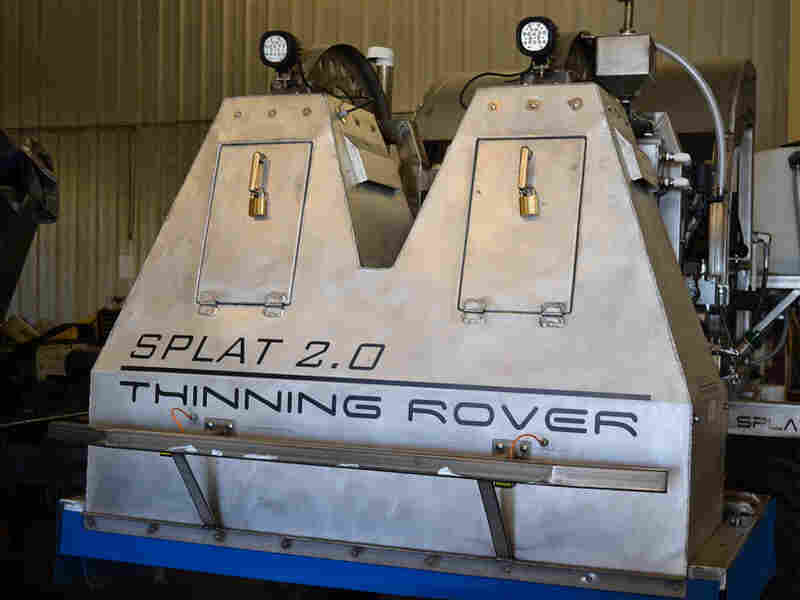 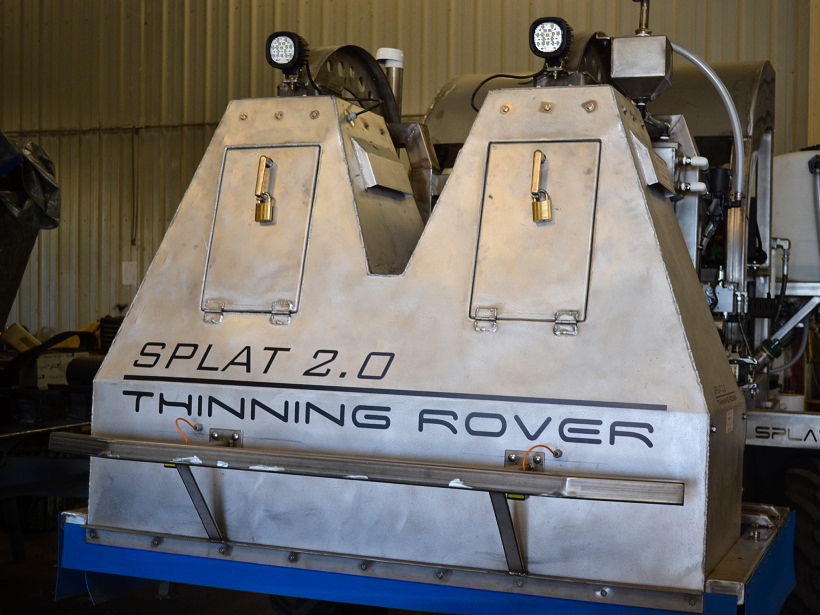 Some people hope that machines like this automated spinach harvester will help farmers deal will less immigrant labor.

Duda says the proposed immigration overhaul bill might solve some of these problems. For one, it would give thousands of workers a path to legal residency and make it easier for others to enter the U.S. But he says those things are probably just stopgap fixes.

"It'll help us in the short term. The long term? Remains to be seen," Duda says.

Since the late 1990s, there has been a slow but steady decline in the number of rural Mexicans migrating north. Agriculture economist Ed Taylor at the University of California, Davis, says that decline has little to do with U.S. immigration policy.

Taylor's research suggests that declining birth rates in rural Mexico, where the economy has also improved in recent years, is the reason why fewer migrants are coming to the U.S. And since farms in Mexico have also expanded to meet the year-round produce demands north of the border, why risk going north?

"Many [American] farmers also have this sense that, if Washington can just get its house in order and pass immigration reform, their problems will be over, and that isn't what our research is showing," Taylor says.

Farms here are going to have to learn how to do more with less immigrant labor, Taylor says. That means switching to less labor-intensive crops, or mechanization.

In the Salinas Valley town of Gonzales, Frank Maconachy with the company Ramsay Highlander may have an answer for farmers worried about big labor shortages.

"The labor resource is dwindling, so we needed to develop a machine that could mechanically cut ... efficiently, effectively, safely and get the crop to market competitively," he says.

That machine is an automatic spinach harvester. His company custom builds them to suit individual farmers' needs — different blades and equipment to pick celery, for example. But the main point is it reduces the need for workers.

"One operator can now harvest 12- to 15,000 pounds of spinach or baby leaf in an hour, where typically a crew of 30 people would be on their hands and knees cutting this with knives and would do half of that volume at best," Maconachy says.

But efficiency comes with a price: $250,000 for one of these machines.

Sammy Duda isn't quite ready to make that kind of investment. Machines can't do everything, he says. "It's very difficult to duplicate the eyes and the feel of a worker when it comes to maturity and quality of the crop."

Even as he focuses on the current immigration bill and whether it will help him get enough workers to get through these next few years, he knows his business is going to have to change. Technology once radically changed this valley when refrigeration allowed iceberg lettuce to be shipped all over the country.

"This particular valley was founded on innovation," he says. "There's a lot of bright people that have their radar going, and so as labor issues change, we adapt or we die."