Accessibility links
Chicken Diapers? Urban Farming Spawns Accessory Lines : The Salt As urban chicken farms grow in popularity, many people are bringing the birds into their homes. They need the right equipment to keep them clean. So several businesses have popped up online, offering everything from custom-sized diapers and leash-ready saddles to chicken caviar. 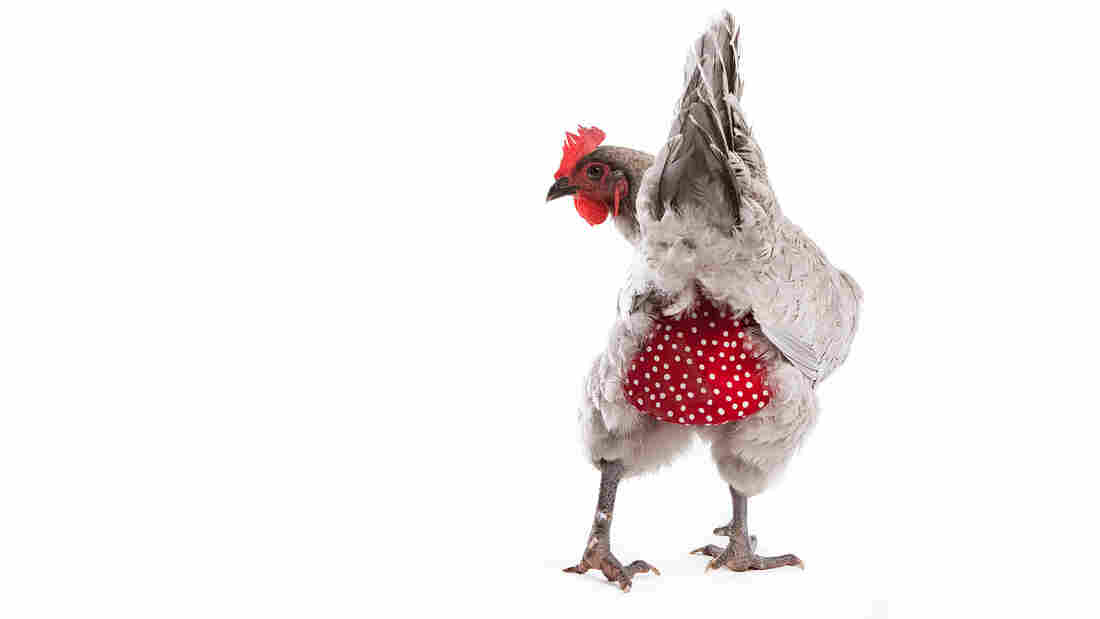 Clucking all the way to the bank: A hen models a polka-dot diaper from MyPetChicken.com, a multimillion-dollar business that sells everything from chicken caviar treats to day-old birds. Courtesy of MyPetChicken.com hide caption 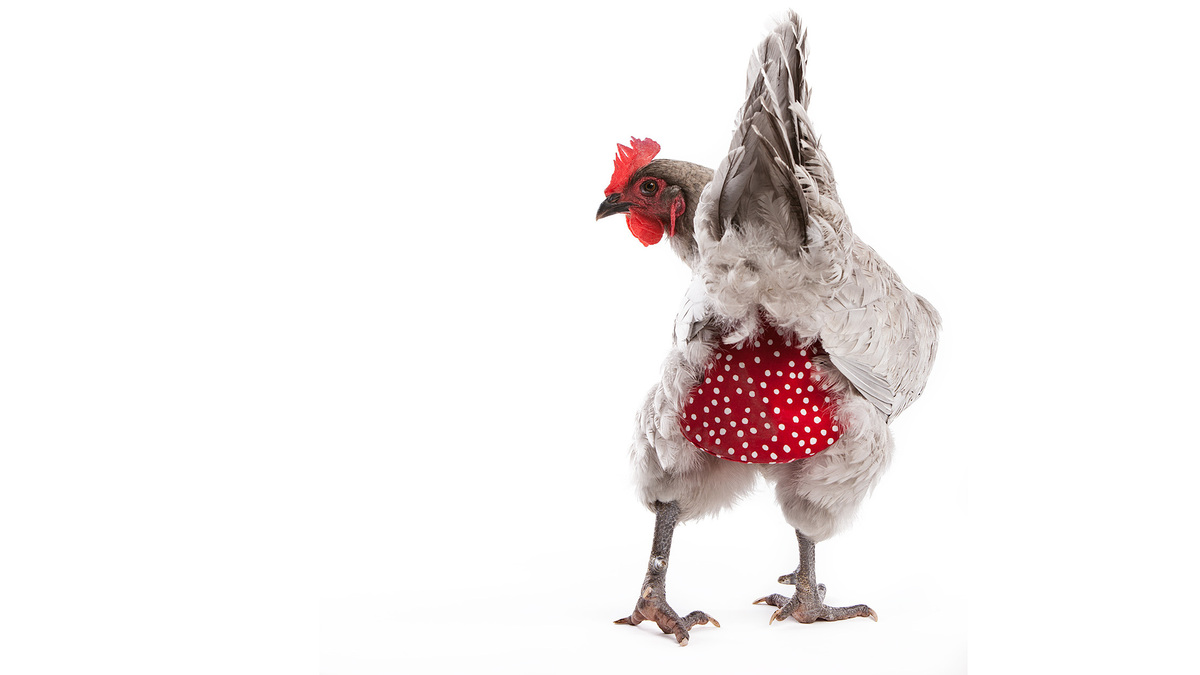 Clucking all the way to the bank: A hen models a polka-dot diaper from MyPetChicken.com, a multimillion-dollar business that sells everything from chicken caviar treats to day-old birds.

When Julie Baker's backyard birds started spending more time inside, it was tough to keep them clean. So she got innovative.

She sewed up a cloth diaper — chicken-sized, of course — added a few buttons and strapped it onto her little lady.

One thing led to another, and eventually, a business was born. 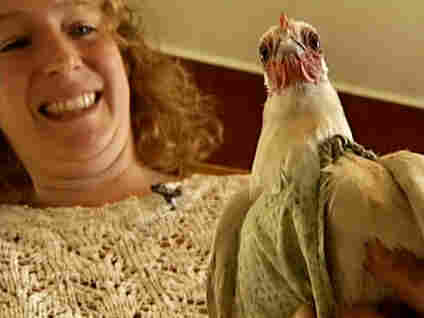 "A lot of my customers use them as dresses," Julie Baker, of Claremont, N.H., says about the poultry diapers she sells online. "They want their chickens to look really cute." Courtesy of WMUR.com hide caption 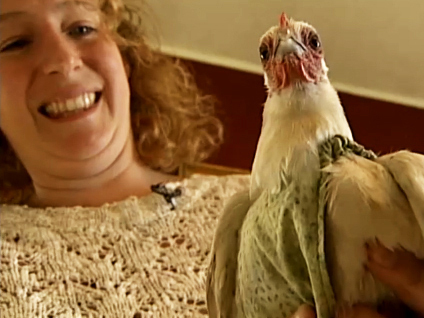 "A lot of my customers use them as dresses," Julie Baker, of Claremont, N.H., says about the poultry diapers she sells online. "They want their chickens to look really cute."

Now Baker's Pampered Poultry ships out about 50 to 100 diapers a week to urban farmers around the country. The store also sells saddles.

"Saddles are almost more useful than the diaper, quite frankly," she tells The Salt. "A rooster isn't particularly kind to a hen when they mate. He grabs her by the back and pulls her feathers out."

"The hen ends up with a completely bare back. It gets raw and bleeds a little bit," she says.

And she's not the only one.

Husband and wife team Derek Sasaki and Traci Torres have even turned the avian accessory business into a multimillion-dollar venture: MyPetChicken.com.

Diapers are a small part of the website's annual sales, most of which come from selling baby birds, Sasaki says. 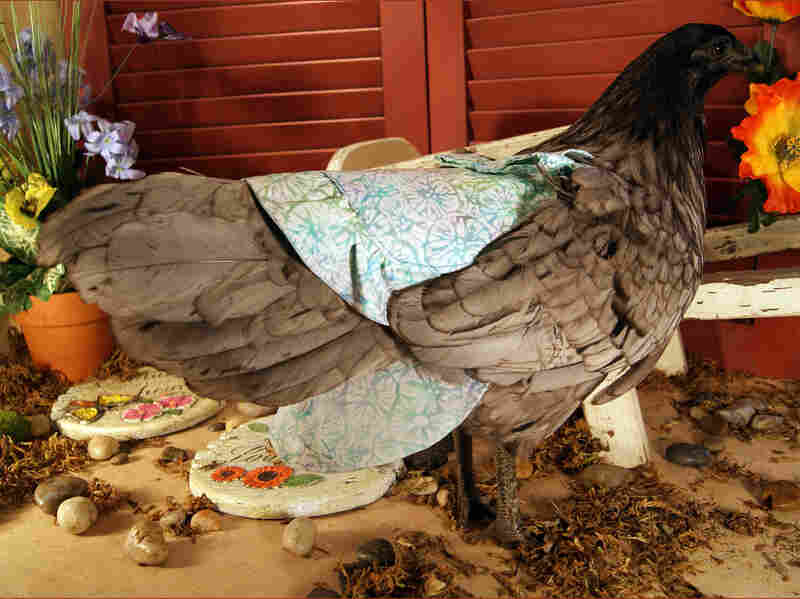 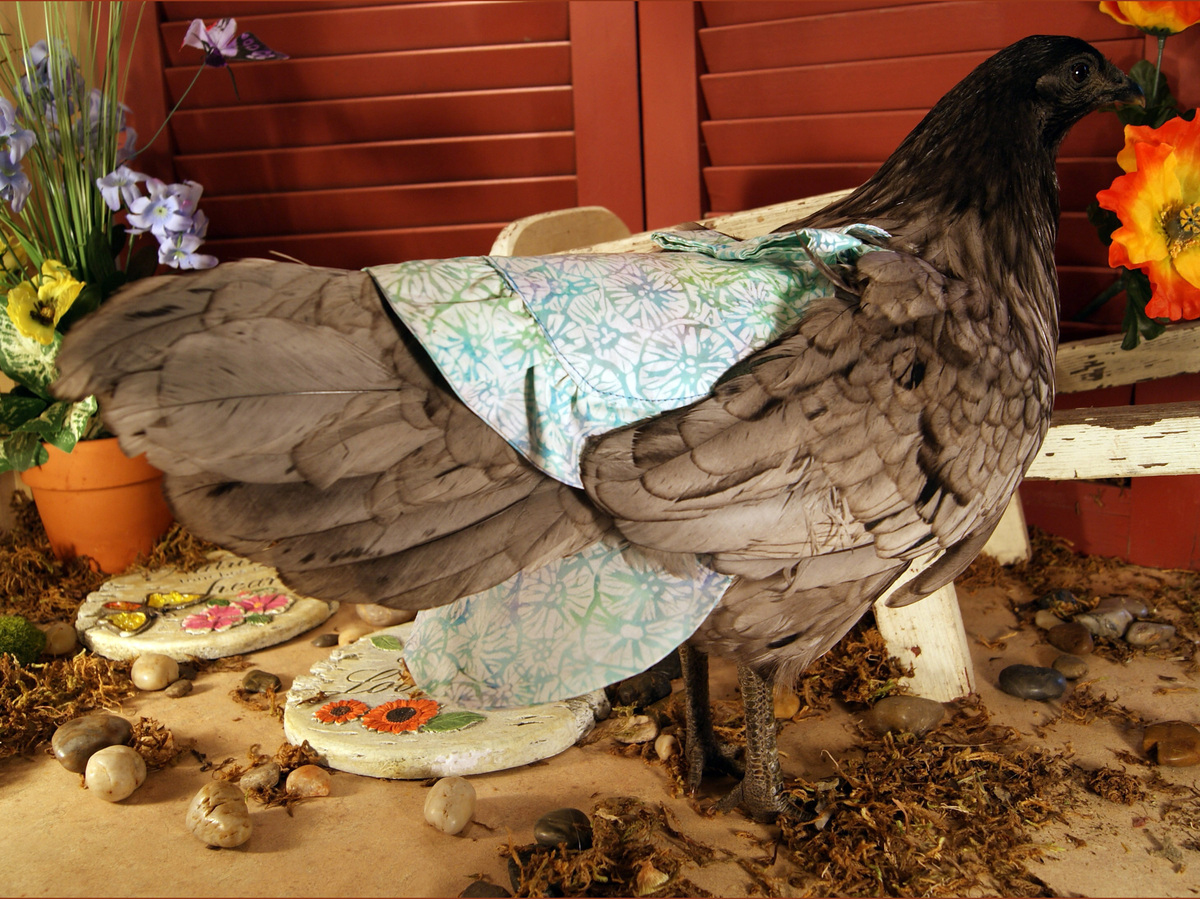 Hello, big guy: Hen lingerie like this "saddle" adds a twist to the phrase "safe sex."

But "our chicken treats are popular," he tells The Salt. These include chicken caviar and "chicken crack" — a mixture of organic grains, organic seeds, dried meal worms and dried river shrimp.

Much has been made in the past few years about the rising popularity of backyard poultry farming.

About 0.8 percent of households in Denver, Los Angeles, Miami and New York City owned chickens in 2010, according to a new report from the U.S. Department of Agriculture. What's more, nearly 4 percent of residents in these cities say they plan to pick up a chick in the next few years.

"Chickens are a symbol of urban nirvana," The New York Times wrote last year, "their coops backyard shrines to a locavore movement that has city dwellers moving ever closer to their food."

Perhaps the "poultry Pampers" and hen lingerie point to the next phase of the urban chicken trend: home invasion.

Ryan Slabaugh thinks so. He's the editor of Backyard Poultry magazine, which touts tens of thousands of subscribers.

More people are keeping chickens as pets instead of as farm animals, Slabaugh says. "I bet close to 50 percent of our readers have chickens around for companionship rather than for any real agricultural purposes," he tells The Salt.

"There are many breeds of chickens that are good to look at but don't lay very good eggs," he says — and they're still popular with urban farmers.

"I got a call the other day from a lady in Idaho because her chicken had a problem with its foot," he says. "She called it a 'lap chicken.' It crawled up in her lap, just like any other pet."

But Torres of MyPetChicken.com says this might be more the exception than the norm.

There are a few die-hard poultry people who keep the birds in their homes 24/7, she says. They have decked-out chicken condos that can be outlandish.

"But usually what happens is that a bird will get injured and someone might bring it inside to recuperate," she says. "The diaper makes cleanup much, much easier."

After the rehabilitation, it can be tough to send the bird back to the yard, Torres says.

And voila — a lap chicken is created.