Accessibility links
Antibiotic-Resistant Bugs Turn Up Again In Turkey Meat : The Salt Turkey producers contend that they use antibiotics judiciously to help keep their flocks healthy. 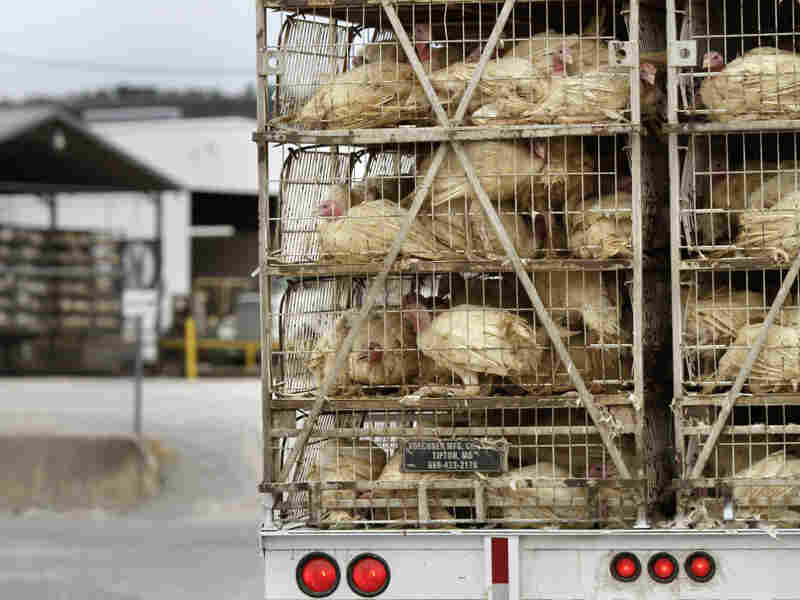 A truckload of live turkeys arrives at a Cargill plant in Springdale, Ark., in 2011. Most turkeys in the U.S. are regularly given low doses of antibiotics. Danny Johnston/AP hide caption 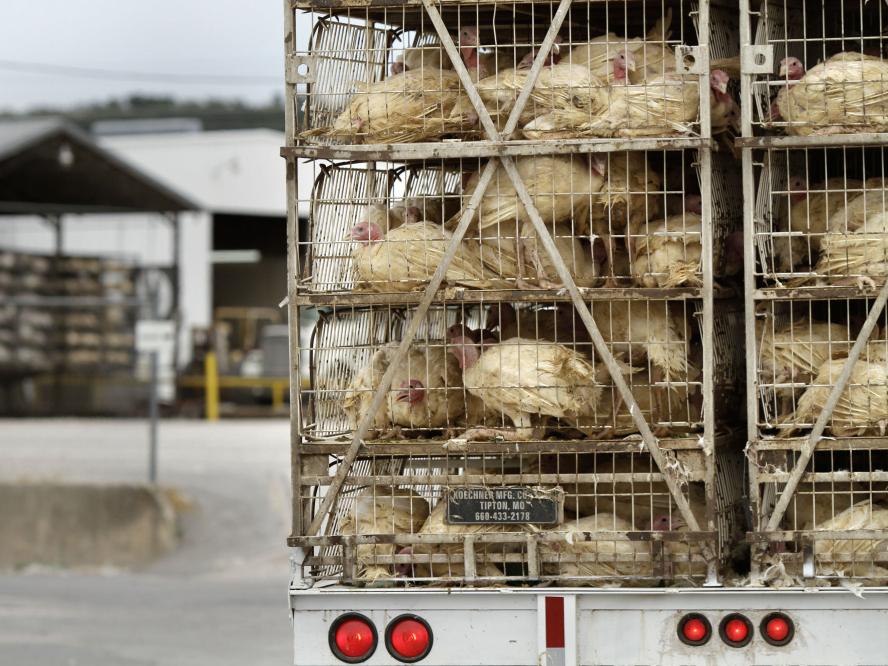 A truckload of live turkeys arrives at a Cargill plant in Springdale, Ark., in 2011. Most turkeys in the U.S. are regularly given low doses of antibiotics.

Consumer groups are stepping up pressure on animal producers and their practice of giving antibiotics to healthy animals to prevent disease. In two new reports, the groups say they're worried that the preventive use of antibiotics is contributing to the development of antibiotic-resistant bacteria, which get harder to treat in humans and animals over time.

This week, Consumer Reports released a report looking at bacteria on turkey meat that are resistant to medicines used for humans. Scientists there tested 257 samples of raw ground turkey meat that they purchased at grocery stores around the country. They conclude that turkey meat that came from turkeys raised organically without antibiotics was significantly less likely to harbor resistant bacteria compared with meat from conventional turkeys that were given antibiotics.

"We think these findings underscore a very important [government] recommendation that we don't need to feed healthy animals antibiotics every day to promote their growth and prevent disease," says Urvashi Rangan, director of the food safety and sustainability group at Consumer Reports.

The findings came on the heels of a report from another consumer advocacy organization, the Environmental Working Group, which analyzed data collected by the federal government's National Antimicrobial Resistance Monitoring System. It also documented high levels of antibiotic-resistant bacteria in store-bought meats.

The Food and Drug Administration took issue with this EWG analysis, saying it came to "misleading conclusions." But meanwhile, the agency has weighed in on the complex problem of antibiotic resistance by calling for the judicious use of antibiotics in food-producing animals.

"One way FDA is working to address this issue [of resistance] is to phase out the use of antibiotics in food animals for growth promotion and feed efficiency," says Jalil Isa, a spokesman for the agency. "FDA believes these drugs should be used only in situations where they are necessary for ensuring animal health, and done so under the oversight of a veterinarian."

The most recent data from the FDA show that about 30 million pounds of antibiotics each year are purchased for use in farm animals. That's about four times more than what doctors prescribe to people.

Around 70 percent of those drugs aren't used to treat sick animals, according estimates by the Union of Concerned Scientists. Instead, farmers administer them at low doses to help animals grow faster and prevent infections.

Diana Goodpasture of Akron, Ohio, knows what it's like to be sickened by a strain of salmonella bacteria that's resistant to antibiotic treatment. In June 2011, after she ate a turkey burger that she had grilled, she became so sick that she was hospitalized for five days.

"It was terrible; it was the worst thing I ever experienced in my life," Goodpasture tells The Salt. She was infected with salmonella Heidelberg that was resistant to three types of antibiotics: ampicillin, streptomycin and tetracycline. The tainted meat was part of a massive ground turkey recall.

Consumer Reports briefed several government agencies on its findings, which were released April 30, on bacteria in ground turkey meat. In an email, the FDA's Isa says the report leaves out information that would have been helpful, such as "details about which types of bacteria were found to be resistant to which antibiotics."

The FDA acknowledges that it overlooked a table in the report that does include the details on which bacteria were resistant to individual antibiotics.

The National Turkey Federation, meanwhile, says it believes turkey producers are using antibiotics judiciously — and that their practices help keep turkey flocks healthy. They point out that in general, the antibiotics used most in raising turkeys are not the same antibiotics that are relied upon to treat people.

NTF President Joel Brandenberger says animal agriculture is only one piece of the puzzle in the problem of antibiotic resistance, but he recognizes FDA's efforts to work with producers to restrict their use of the drugs.

"The National Turkey Federation has been cautiously supportive of FDA's strategy," says Brandenberger.

According to poultry scientist Michael Hulet at Penn State University, the poultry industry has already stopped using a lot of the drugs that are still used to treat infections in humans, like ciprofloxacin. And, he says, when the industry does use the same drugs that doctors prescribe to sick people — drugs like tetracycline — it's usually only to treat animals that are truly sick, not to prevent disease.

"The industry has really cut back on the number of drugs used [for routine prevention of disease in healthy animals] because of some of the concern about resistance," Hulet says.

But Gail Hansen with the Pew Campaign on Human Health and Industrial Farming says it's impossible to confirm whether the poultry industry's claims are true, because there are no publicly available data on how the drugs are actually used. "So far, all we really have is 'trust' and no way to verify," says Hansen.

Lawmakers on Capitol Hill have proposed new legislation that would restrict the use of antibiotics in food animals and eight classes of antibiotics for human use only.

A previous Web version of this post incorrectly stated that 74 percent of the antibiotics purchased for farm animals are administered at low doses to help animals grow faster and prevent infections. In fact, the estimate is 70 percent.