Accessibility links
Unraveling The Mystery Of A Rice Revolution : The Salt An economist wanted to find out why some farmers in the developing world were abandoning a new way of growing rice that increases yields while reducing the need for seeds and water. He found that even while their rice fields were more productive, their household income didn't go up.

Unraveling The Mystery Of A Rice Revolution

Unraveling The Mystery Of A Rice Revolution 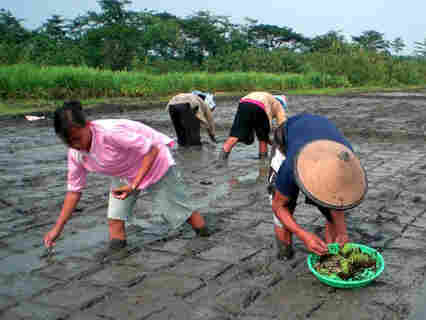 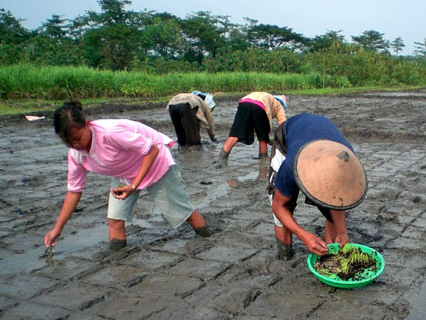 It's a captivating story: A global rice-growing revolution that started with a Jesuit priest in Madagascar, far from any recognized center of agricultural innovation. Every so often, it surfaces in the popular media — most recently in The Guardian, which earlier this year described farmers in one corner of India hauling in gigantic rice harvests without resorting to pesticides or genetic modification.

Their secret? A "system of rice intensification," or SRI, that the priest, Henri de Laulanié, who was French, developed 30 years ago. It's now promoted by an international network of SRI evangelists, with a center at Cornell University. Among the secrets of SRI: transplanting rice seedlings into fields with great care, planting them far apart, and enriching the soil with compost. The result, according to SRI's proponents, is an increase of 50 to 100 percent in yields, using 90 percent fewer seed and half as much water for irrigation.

But there's a mystery surrounding SRI, as Christopher Barrett, an economist at Cornell University, discovered. "If this is all it's cracked up to be, why isn't everybody doing it?" says Barrett. And even some farmers who try it, abandon it — 15 to 40 percent of farmers, in some communities, studies show. 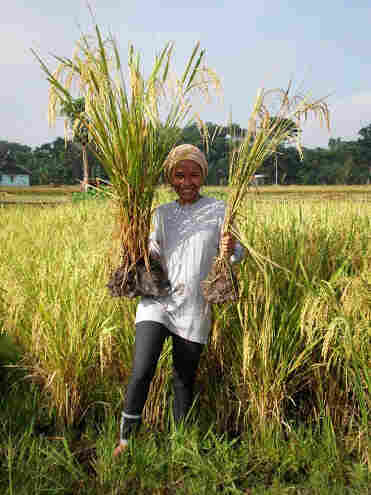 A farmer in East Java, Indonesia, holds up rice grown in a "system of rice intensification" on the left, and non-SRI rice on the right. Shuici Sato/Courtesy of SRI International Network and Resources Center hide caption

Barrett joined forces with Kazushi Takahashi from the Japan External Trade Organization, and took a closer look at a community of farmers in Indonesia, some of whom were using SRI. Their findings, recently released as a "working paper," may help explain the mystery. (There's also a Power Point presentation with photos.)

First of all, Barrett and Takahashi found that SRI did, in fact, boost the farmers' yields of rice by an estimated 64 percent. But here's the bad news: Even though the farmers were harvesting more rice and spending less on seeds and chemicals, their household income did not go up at all.

This apparent contradiction actually has a pretty simple explanation, Barrett says. Farming families in Indonesia — in fact, in much of the world — don't just work on the farm. When they have time, they also find work elsewhere to earn more money.

But SRI demands more time for all that careful transplanting and soil improvement. And as a result, family members have less time for outside work, and that lost off-farm income cancels out any gain from the rice harvest. (Interestingly, although SRI reduced outside work, it did not appear to reduce the rate of school attendance among children.)

Norman Uphoff, a professor of government at Cornell who has been SRI's most important advocate, says that what Barrett and Takahashi saw in Indonesia isn't typical of other places. "If you go to China or India, you'll find that farmers are saving labor with SRI, not using more labor," he says, because farmers in those countries already are spending a lot of time in their rice fields. In addition, he says, farmers who stick with SRI soon find ways to do the work more quickly. "It's not intrinsically labor-intensive; it's initially labor-intensive," he says.

Barrett agrees that his Indonesian observations don't prove that the same thing is happening everywhere. But they do represent "a cautionary tale" about the ambiguous effects of agricultural innovation.

Agricultural scientists tend to focus on ways to make fields more productive. But according to Barrett, when it comes to improving the lives of rural people, high yields really are only one part of the picture.