Wake Up And Smell The Tuna? Sunrise At Honolulu's Fish Auction

Wake Up And Smell The Tuna? Sunrise At Honolulu's Fish Auction 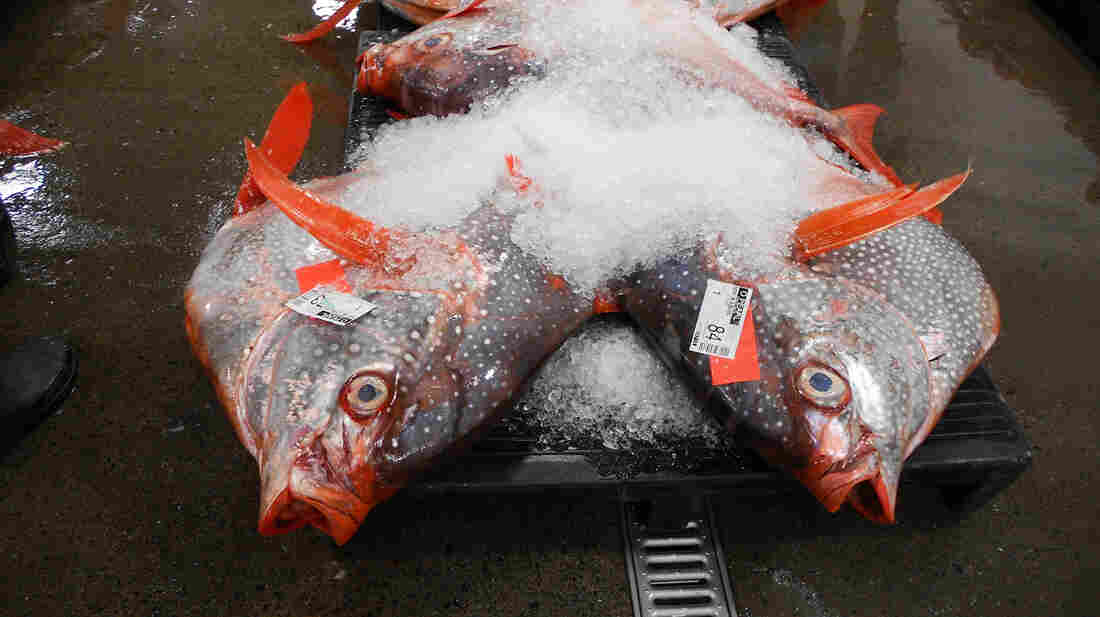 Among the 50,000 pounds of fish at the Honolulu auction last Friday was this opah, or moonfish, Lampris regius. Joe Palca/NPR hide caption

If you are up at 5 in the morning in Honolulu and are wondering what to do, I have a suggestion: Head over to Pier 38 and watch the Honolulu Fish Auction. It's quite a scene.

Getting up at 5 may seem a bit extreme, but for recent arrivals to Hawaii from the East Coast of the mainland — as I was last Friday — the six-hour time difference makes waking up early easy, if not inevitable.

The auction takes place in a low-slung single-story building toward the end of the pier. At about 1 a.m., fishing boats start bringing in their catch. Each fish is tagged, placed on pallets and covered with crushed ice. Most of the fish are caught using a long-line fishing technique: baited hooks hanging at intervals from a long rope. Brooks Takenaka, one of the guys who runs the auction, says it's all highly regulated and that sustainability is a top concern.

The day I visited, there were about 50,000 pounds of fish on the auction floor. There's a pretty wide selection — from the large bigeye tuna (Thunnus obesus) and broadbill swordfish (Xiphias gladius) to the smaller mahi-mahi (Coryphaena hippurus) and ono (Acanthocybium solandri). I stick in the scientific names because the same fish can have a lot of different common names. Ono is also called wahoo, and mahi-mahi is sometimes referred to as dolphin fish.

At approximately 5:30 a.m. PT, one of the auctioneers rings a brass bell, and a crowd of about two-dozen buyers clusters around a pallet as an auctioneer calls out prices. To the uninitiated it's a little hard to follow, but clearly someone is making a successful purchase. Prices vary by species, time of year and quality of fish. The day I visited, some of the tuna were going for $8 per pound or more.

The group moves fairly rapidly from one pallet to the next, while a trailing worker tags each fish with the name of its buyer. Once that's completed, other workers swoop in with hand-powered forklifts and start distributing the fish to trucks waiting at multiple loading docks alongside the building. Most of this haul will be eaten in the Hawaiian islands, though a sizable fraction will head to the mainland. It can take hours to complete the auction, depending on the size of the day's catch.

After standing on the chilly auction floor for about 45 minutes, I realized something was missing: the smell of fish. Really fresh fish doesn't smell the least bit fishy. I guess I knew that, but it's still remarkable to experience.

Though it's been around since 1952, the auction isn't a tourist attraction. But if you're interested in visiting, call the Hawaii Seafood Council and they'll see what they can do.