Accessibility links
With Warming Climes, How Long Will A Bordeaux Be A Bordeaux? : The Salt Climate change is already creating new winners among Europe's winemaking regions. (Great bubbly from Britain — who knew?) But those changes have also put in doubt the rules and traditions that have defined the continent's top winemakers for centuries. 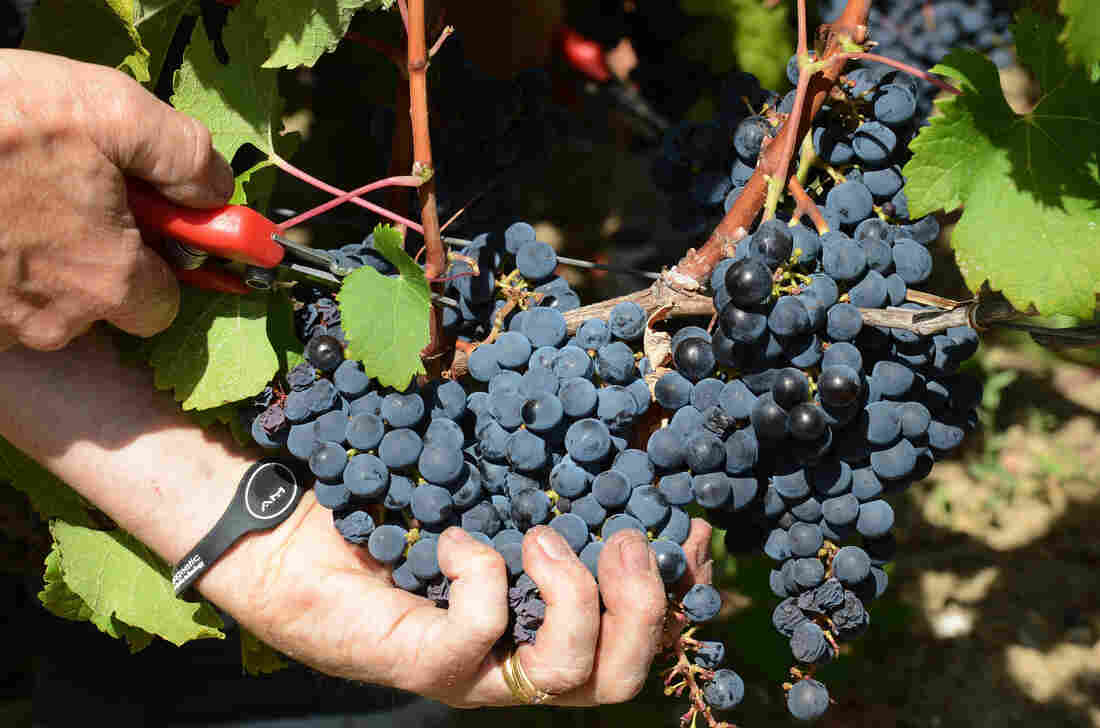 Bordeauxs and Burgundys haven't changed much since the days when famous wine-lover Thomas Jefferson kept the cellars of his Parisian home well-stocked with both wines.

But now, some worry that the regional rules and traditions that have defined top winemaking regions like Champagne, Burgundy and Chianti for centuries could melt away as climate change takes effect.

The main concern is that grape varieties that have brought renown and reputation to certain appellations — the syrah grapes of the French Rhone Valley, or the cabernet sauvignon of Bordeaux — may no longer thrive in those places several decades from now. Some people say there is little reason to fear, but others are already thinking ahead about which grape varieties will work best in their regions under forecast temperature changes. And it's possible that old wine standards and definitions, revered like religion for ages, could be rewritten as winemakers adapt to a warmer future.

"As grape-growing suitability moves northward, I believe the winemaking regulations of Europe could break down quickly," says Lee Hannah, a University of California, Santa Barbara-based climate specialist with Conservation International. He co-authored a recent study in the Proceedings of the National Academy of Sciences forecasting how climate change might reshape the global winemaking map.

Already, climate change is creating new winners among Europe's winemakers. In southern England, warmer temperatures are credited with setting off a sparkling wine boom. In Germany, where Riesling and Gewurztraminer have long been superstars, new grape varieties are beginning to thrive, says German viticulturist Hans Reiner Schultz, a professor at Hochschule Geisenheim University.

Meanwhile, winemakers in other parts of the continent are feeling the heat, and there is increasing discussion about changing the rules to allow them to introduce grape varieties that are currently prohibited but likely to thrive under future climate conditions.

And grape growers, who must look ahead decades to when their vines will be in prime production, may soon be planting new varieties of vines known to produce fruit better in warmer, drier climates. Experimental government vineyards are already doing this.

"Changing grapevine varieties is absolutely an option, not in a short term, but by 2050 to 2070," Kees Van Leeuwen, of the Agricultural University of Bordeaux, tells The Salt. "We are currently experimenting in our research center [the Institut des Sciences de la Vigne et du Vin] how later-ripening varieties behave in the Bordeaux climate."

Late-ripening varieties are considered the best candidates for helping regions adapt to climate change. That's because, in general, the later that grapes ripen, the better their sugar-acid balance — an important component in winemaking.

When grapes ripen especially early — as they do in warm years — they may fail to develop the acidity necessary for making good wine. This means that many grapes that currently ripen in the optimal harvest time of September might, in a warmer future, become relatively useless to some winemakers who use them today.

Leeuwen says changing French laws on regional grape use won't be easy, and could take as long as 15 years.

Other regulations are already breaking down -- such as laws forbidding irrigation. The practice is considered taboo by many, and some wine critics feel it can result in watery-tasting wines.

But in exceptionally hot and dry conditions, watering vines can help increase the yield of fruit. And in 2006, the French government decided to do away with its prohibition on irrigating. Anti-irrigation laws have also been loosened in parts of Spain, says Schultz.

"When they changed the rule [in France], it was like a second French Revolution, because many people were very, very opposed to this," Schultz says. Now, he adds, "there is no more talk of prohibiting irrigation."

That rule change comes at a cost, says Leeuwen. He says irrigation can increase the soil's salinity level, which can be harmful to grapes. In Bordeaux and other fine wine regions, where the richness of the dirt is credited for the quality of the wine, the consequences of irrigation could be dire. Leeuwen says salinity buildup in some southern Australian vineyards is causing winemakers to abandon them.

But Michel Chapoutier, a winemaker in the Rhone Valley, has more confidence in the future. He thinks current regulations already give winemakers all the leeway they need to use different grape varieties to adapt to climate change. A Bordeaux will still be a Bordeaux, he argues, without a change in rules or a compromise in quality — winemakers will merely have to adjust their blend ratios.

Lamberto Frescobaldi, of his family's winery in Tuscany, says he believes old traditions should not be allowed to hinder winemakers from adapting to climate change — even if it means permitting new grapes in their wines. But he doubts that Tuscan winemakers will ever let sangiovese, the main variety of the region, slip to the wayside.

Schultz, too, expects that historically dominant wine regions will do everything they can to avoid giving up the grapes that have defined them for centuries.

"Burgundy without a pinot noir or chardonnay," he says, "would not be the Burgundy we know."

A previous version of this story misidentified the journal in which Lee Hannah's research recently appeared. His paper on climate change and winemaking appeared in the Proceedings of the National Academy of Sciences, not the journal Science.