Accessibility links
Tiny Mites Spark Big Battle Over Imports Of French Mimolette Cheese : The Salt Microscopic bugs called cheese mites are responsible for the distinctive rind and flavor of the bright orange French cheese Mimolette. But now, the FDA has blocked more than a ton of Mimolette from entering the country, because the agency says the mites left on it make it unfit for consumption. 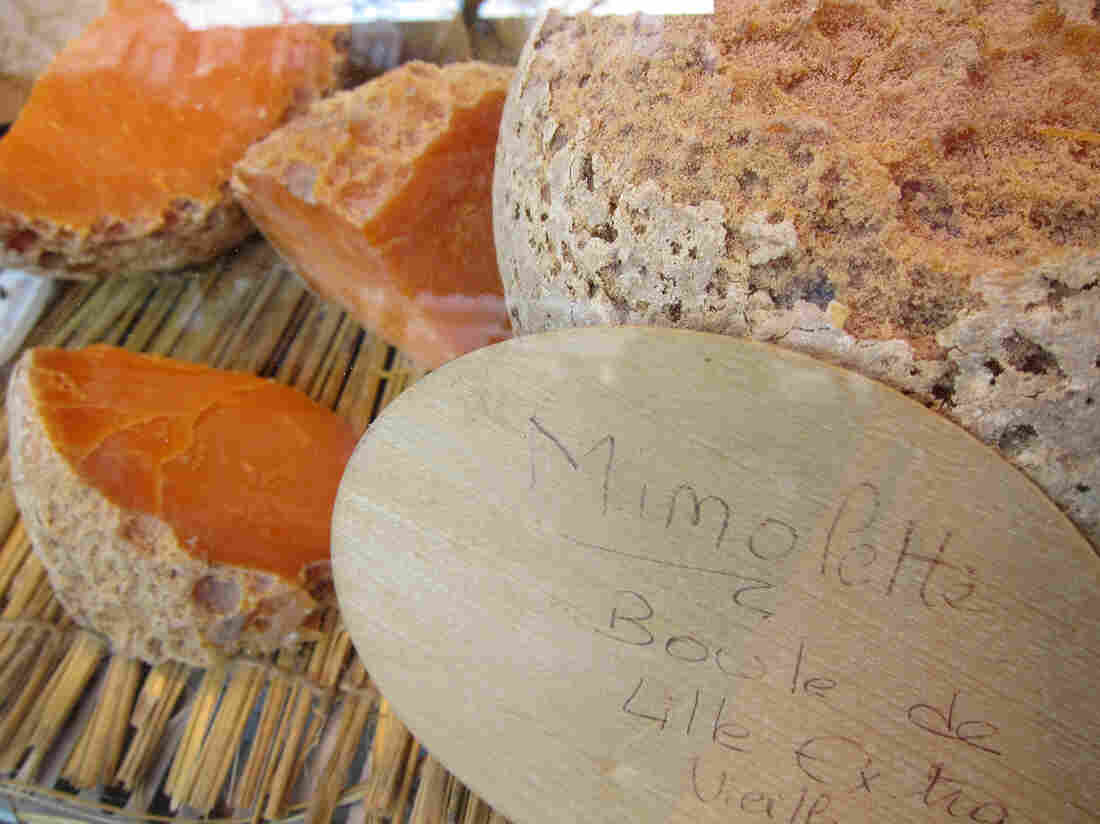 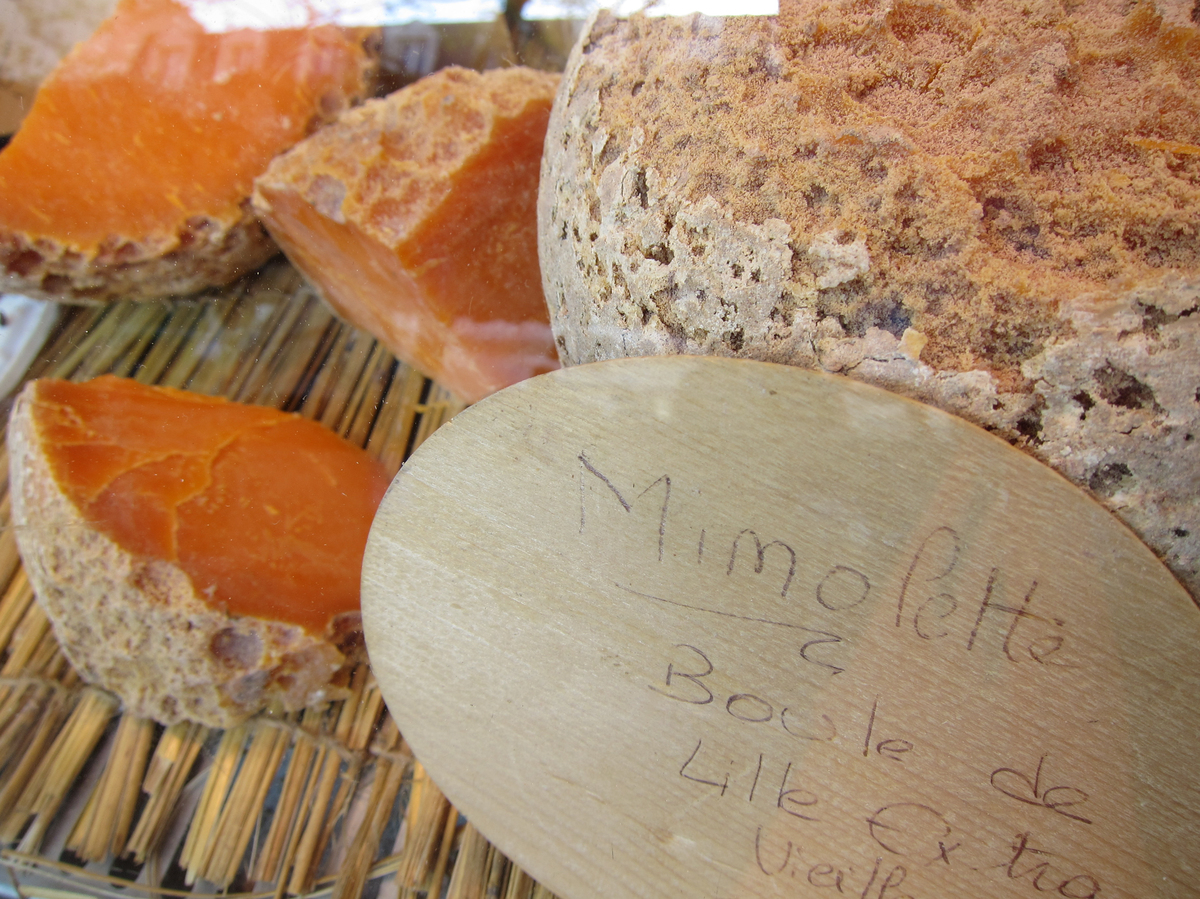 The Food and Drug Administration is currently embroiled in a surprisingly heated culinary standoff — pitting French cheese-makers (and American cheese-lovers) against regulators, all because of one very small problem: cheese mites.

Cheese mites are microscopic little bugs that live on the surfaces of aged cheeses, munching the microscopic molds that grow there. For many aged cheeses, they're something of an industry nuisance, gently brushed off the cheeses. But for Mimolette, a bright orange French cheese, they're actually encouraged.

The mites munch on the rind for a few years and then are removed — usually with a blast of compressed air and a bit of hand-brushing — before Mimolette is sold. But there are always a few hiding behind. And now the FDA is cracking down.

According to the FDA's Patricia El-Hinnawy, there's no official limit, but the target is no more than six mites per square inch. For Mimolette, that's a near impossible standard.

Benoit de Vitton is the North American representative for Isigny, one of the largest producers of Mimolette. In March, de Vitton began receiving letters from each of the dozen importers he works with, saying that their Mimolette shipments had been detained.

De Vitton estimates that he now has about a ton of cheese sitting in FDA warehouses in New Jersey. "They say the product, because of the mites, it is not proper for human consumption," de Vitton sighs.

Ironically, de Vitton notes that Mimolette itself is rumored to have been created because of import issues in the 17th century. "The French were at war with Holland, and the king didn't want any more Dutch Gouda coming to France. So he asked to create kind of the same cheese."

But in the 21st century, do we need a cheese ban? Microbiologist Rachel Dutton runs a cheese lab at Harvard University, and we checked in with her about the dangers of mites. Dutton notes that there have been some reports of mite allergies, but they seem to be restricted to people who have come into contact with large numbers of mites.

What The Camembert Rind Does For The Cheese Inside

And Dutton says that while we may not like to think about bugs, they're a part of what makes cheese so delicious.

"Cheese is absolutely alive," Dutton laughs. And all of that life — the molds, bacteria, yeasts and mites — help make cheese what it is. Dutton says that the mites on Mimolette can contribute flavors of their own (they have a somewhat earthy smell), and by eating into the rind, they can also increase aeration — and the surface area in which the other microbes can do their work.

Dutton understands that this doesn't sound appealing, but implores people to realize the good work of these bugs. "There definitely are microbes that can spoil food and make either it bad for you to eat or just sort of gross. But any time you eat a piece of cheese or a bite of yogurt, have a piece of bread or a glass of wine — these are all examples of foods fermented by different types of microbes."

Throughout France, cheese lovers have been rallying in support of Mimolette. There are radio stories, YouTube videos — there's even an ex-pat Save the Mimolette Facebook campaign (of course).

In America, the response is a bit more subdued. Some cheesemongers are buying up the limited supply, but most are content to shrug it off. Sasha Davies, of Cyril's cheese/wine bar in Portland, is nervous about what the mite crackdown could mean for other aged cheeses, but in general is fine reaching for an aged Gouda instead of Mimolette.

"I find I can scratch the itch I feel for Mimolette with a lot of other cheeses," she admits.

Davies says that the fervor for Mimolette isn't just about its caramel notes or lactic tang or bright orange color.

"There are cheeses that — even though I think they taste delicious, they tug at my heartstrings, either because I love the person that makes them, or I have this great memory of being in a special place," she says. "Food is never really just food."

And for many French people, Mimolette brings a taste of memory, family and home — as well as mites.