Accessibility links
Samoans Await The Return Of The Tasty Turkey Tail : The Salt In 2007, Samoa banned the import of turkey tails from the U.S. to try to improve public health. But the ban kept the island nation from entering the World Trade Organization, so its days are numbered. 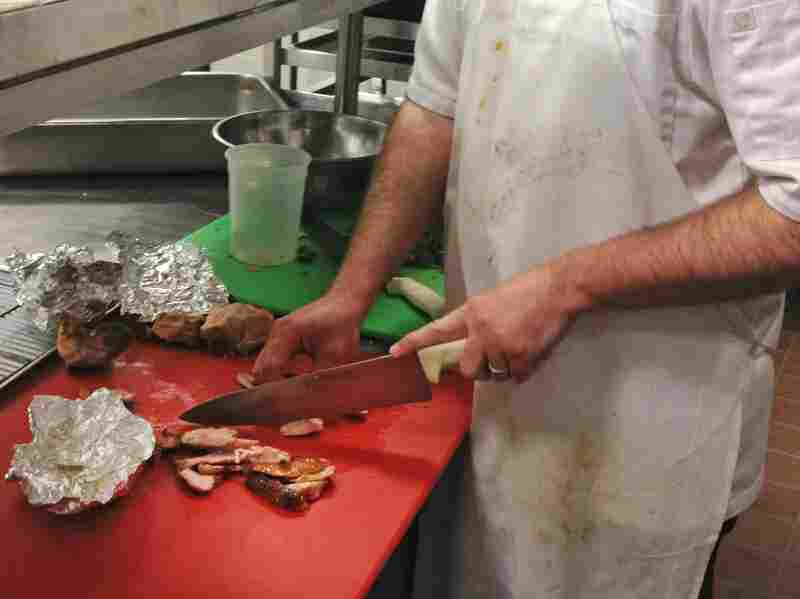 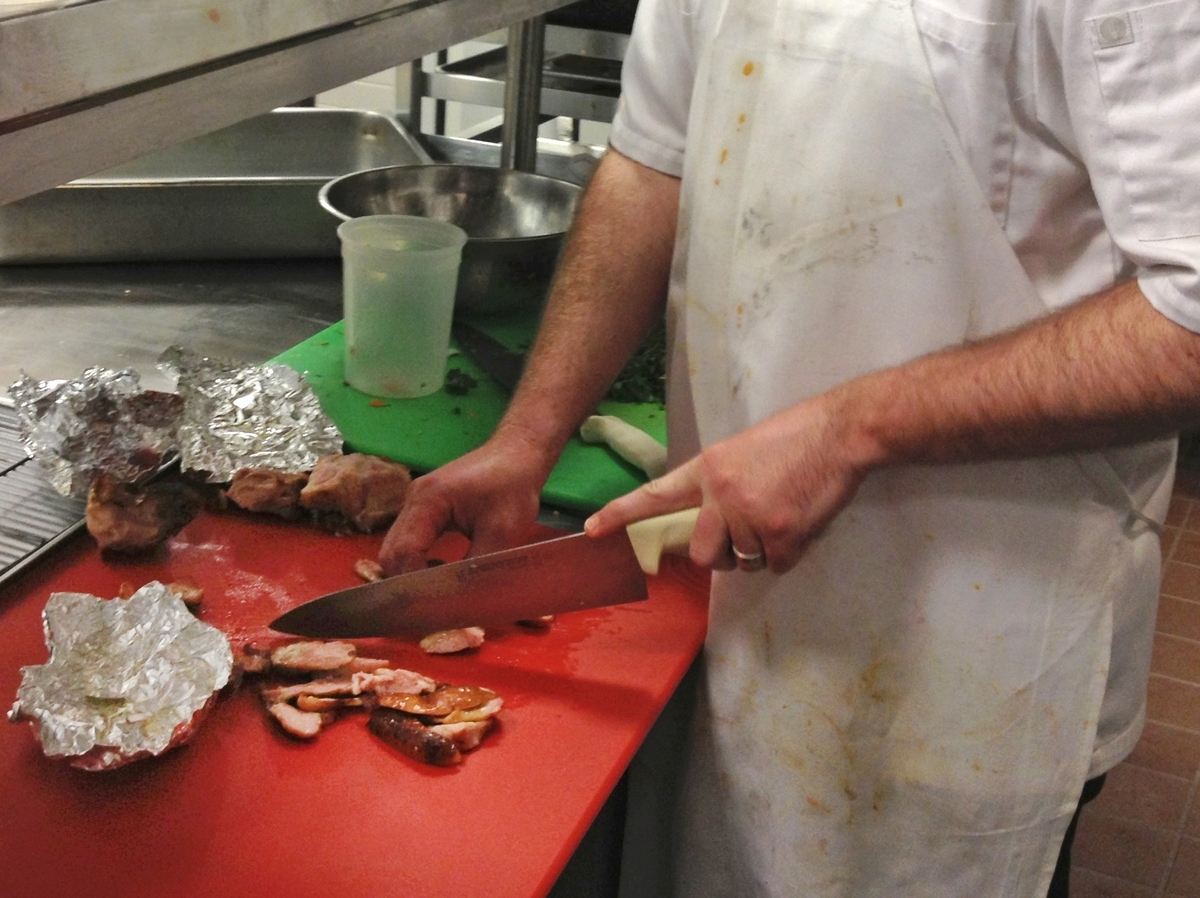 A chef in the kitchen of NPR headquarters prepares turkey tails.

This is the tale of turkey tail — it's convoluted arrival, disappearance and highly anticipated return to the Pacific island the Republic of Samoa (not to be confused with American Samoa).

It's hard to pinpoint precisely when turkey tails started being imported into Samoa from the U.S. and when they became a favorite, affordable dish. Meat byproducts (Spam and fatty lamb cuts from New Zealand) started showing up sometime after World War II, and turkey tails came shortly thereafter.

One thing is clear, as Robert Siegel reports on All Things Considered: Many Samoans love them and miss the fat-laden cut of bird, banned for import in 2007.

Apaula Brown is originally from the Republic of Samoa but has lived in Washington, D.C., for many years. "We usually boil the turkey tails first to get rid of the fat and then we chop the turkey tails into pieces," she says. "If we want to cook it in a chop suey, we mix it with vegetables; it's delicious."

Samoa's ban on the import of turkey tails — and New Zealand mutton flaps, as well — in 2007 was the government's attempt to improve public health in a country that, like several other Pacific island nations, has among the highest rates of obesity, diabetes and hypertension in the world. According to a 2010 report from Samoa's Ministry of Health, 53 percent of Samoans are obese.

Sela Panapasa is an assistant research scientist at the University of Michigan's Institute for Social Research of Fijian and Tongan ancestry. She studies the worsening health problems of Pacific islanders and says turkey tails were a big part of the local diet because they were cheap and accessible until the ban came along.

"I know it may seem ironic but fish and native staple foods do cost more than turkey tails," she says.

Now, no one is saying that the fatty dish is the cause of Samoa's high rates of diabetes and hypertension — 23 percent and 21 percent, respectively, according to the World Health Organization. Other imported foods, genetic predispositions or an increasingly sedentary lifestyle could be to blame, too.

But as for the turkey tails, were American turkey producers just dumping their turkey tails on the island nation?

James Sumner, president of the U.S. Poultry and Egg Exporting Council, says his organization didn't realize they were exporting turkey tails to Samoa until he learned about the ban.

"It was obviously as a result of Samoan demand, not the attempt of the U.S. industry to force other countries to take our turkey tail products," he says. "We're not out trying to develop markets around the world for duck tongue, turkey tails or chicken feet."

The Samoans realized that the ban eventually had to go because banning imports of just one or two products violates World Trade Organization rules.

And since the late 1990s, the poor island nation of just under 200,000 people had been trying to join the WTO, hoping to improve its economy with a gross domestic product of less than $2 billion.

According to Aliioaiga Feturi Elisaia, Samoa's ambassador to the U.S. and the United Nations, the process of joining the WTO consumed the country for more than a decade. The final agreement to lift the ban on turkey tails was made in 2011. The actual lifting of the ban begins this week.

Here's the deal the Samoans struck: For the next two years they can add a 300 percent tariff to turkey tails, and then for one year, a 100 percent tariff. By 2016, Samoa is expected to have suppressed its people's appetite for turkey tails through public health education. After that, affordable turkey tails could, presumably, return.

But the ambassador, Brown and Panapassa all agree that before the arrival of cheap foreign foods few people were obese. They ate mostly fish and vegetables and lived more active lives.