Accessibility links
Can Star Power Make New Orleans' Food Deserts Bloom? : The Salt Actor Wendell Pierce, who stars in David Simon's Treme, is trying to combat New Orleans' food deserts by building convenience and grocery stores in the city's neediest areas. But a host of stumbling blocks still make it hard to get fresh, healthful foods to people living in these areas. 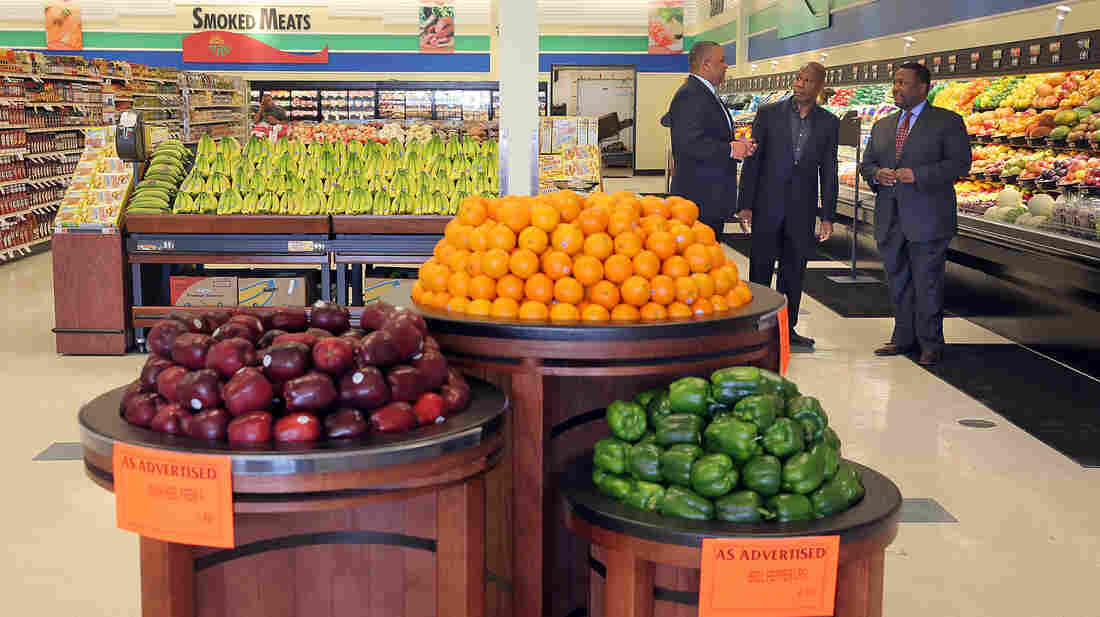 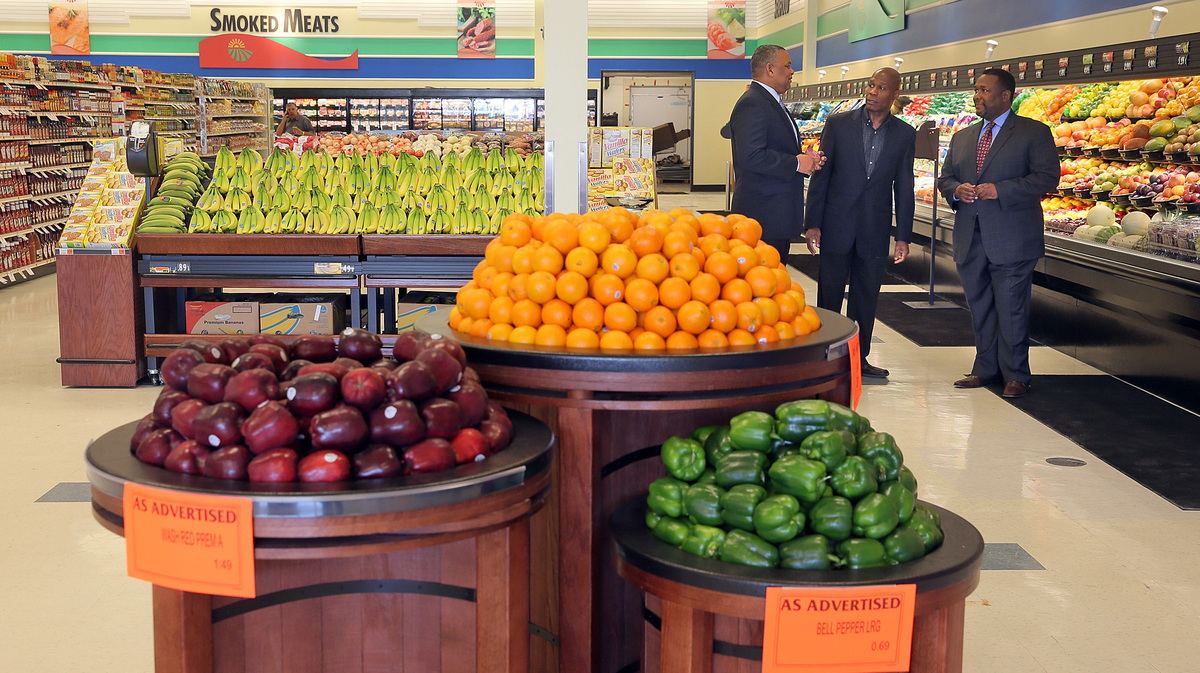 Troy Henry (from left), Jim Hatchett and Wendell Pierce, co-owners of Sterling Farms grocery store, meet at the store's soft launch on March 21. Pierce, an actor, gained fame through his starring roles in David Simon's The Wire and Treme.

Plenty of celebrities leverage their star power to raise awareness of complicated food issues. Some of the biggest names include Michelle Obama, Jamie Oliver, Prince Charles and Paul McCartney.

Down in New Orleans, actor Wendell Pierce, who stars in David Simon's Treme and, previously, The Wire, has been taking on food insecurity in low-income communities with brand new convenience stores. Pierce has received plenty of attention for his efforts and appeared this week on NPR's Tell Me More to talk about the opening of the first grocery store in his New Orleans-based Sterling Farms chain earlier this spring.

Even though New Orleans' restaurant sector is booming — there are over 1,200 in the city, even more than before Hurricane Katrina — many communities outside the center have been waiting in vain for supermarkets to return. That's because of investors' "economic apathy," Pierce says.

A food desert is defined as an area where the nearest grocery store is more than 10 miles away. And New Orleans has plenty of them, as the U.S. Department of Agriculture's new Food Access Research Atlas shows. "For me, growing up in New Orleans, where so much of the culture is based around food, it's unacceptable [to have them]," Pierce told Tell Me More.

But even with Pierce's leadership (he was recently named one of FastCompany's 100 most creative people in business) and investment dollars behind the effort, a host of stumbling blocks still make it hard to get fresh, healthful foods to people living in these areas. And as food activists are discovering all over the country, grocery stores alone won't make the food desert bloom. 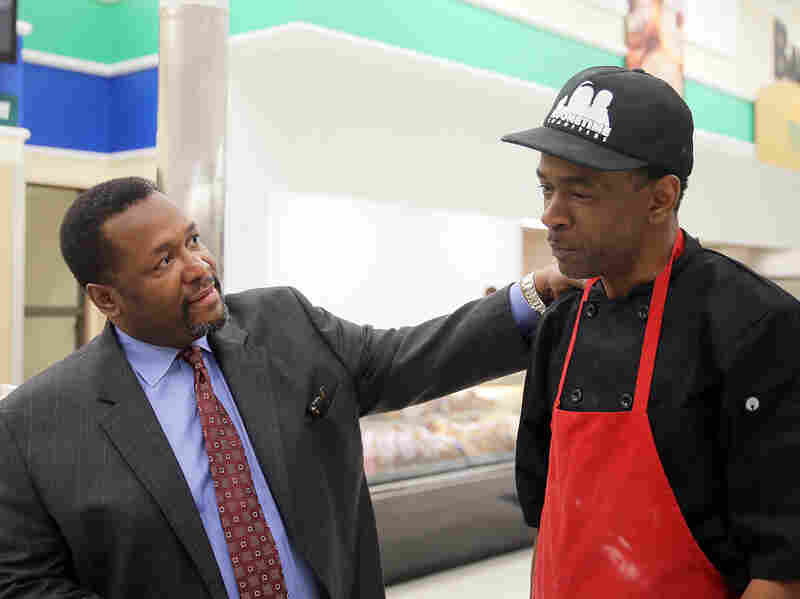 Wendell Pierce, the actor and co-owner of Sterling Farms grocery store, chats with Dwight Henry, who will be making doughnuts and buttermilk drops in the store. David Grunfeld/The Times-Picayune /Landov hide caption

This isn't Pierce's first foray into rebuilding New Orleans: After Katrina, he set to work building new energy-efficient homes in his neighborhood of Pontchartrain Park. That process was beset with delays and snafus — not unlike a lot of the scenarios that appear in Treme and The Wire. "It's life imitating art, and art imitating life," Pierce told the New York Times last year. "The shows influence me, and the work I do influences the shows."

Like his housing initiative, Pierce's retail food plan has been moving slowly. In addition to marshaling private funds, Pierce and his partners went after grants awarded through the Obama administration's Healthy Food Financing Initiative. Even with them, coming up with the financing for the project hasn't been easy.

"The most difficult part is making sure that everybody is on board when it comes to the banking institutions," Pierce said. The bankers, he said, had to be convinced that grocery and convenience stores would be viable business models in these communities.

Sterling Express is now operating two convenience stores, along with the new grocery store. The success of these ventures is ultimately going to depend on how well they can meet the needs of the communities they serve.

One issue is transportation. Sterling Farms is offering shoppers who spend $50 or more a free shuttle ride home — which might be more convenient than boarding a public bus with armloads of groceries. That option prompted this comment on Tell Me More's interview with Pierce: "Genius idea, as lack of transportation is a major stumbling block to folks getting access to quality, competitively-priced, heavy, fresh food choices!"

And as we reported last year, studies show that shoppers don't just care about cost and proximity to fresh produce — they also need choice and quality if they're going to buy it.

Mike Kantor, co-chairman of the New Orleans Food Policy Advisory Committee, commends Pierce's program. But he says there's another key part of the puzzle: making sure the poorest people in these communities are getting the food stamps, or SNAP benefits, they're entitled to.

"When we talk about food deserts, we can't just focus on location and geographic access," Kantor tells The Salt. "We have to talk about economic security, which means talking about programs the people going to shop at stores rely on in order to afford the produce that's sold there."

According to Kantor, more than 20 percent of households in the state of Louisiana live under the federal poverty line. While 77 percent of the people in the state who are eligible for SNAP are participating in the program, that coverage could be higher.

"And the actual benefit amount," he notes, "is barely enough for people relying on the program."