Accessibility links
Washington State Butcher Spikes Pig Feed With Weed : The Salt Despite its name, the "pot pig" experiment isn't an attempt to develop a new meaty treat for stoners. Instead, a Seattle butcher is feeding marijuana seeds, stems and root bulbs to swine as a cheeky money-saving measure. 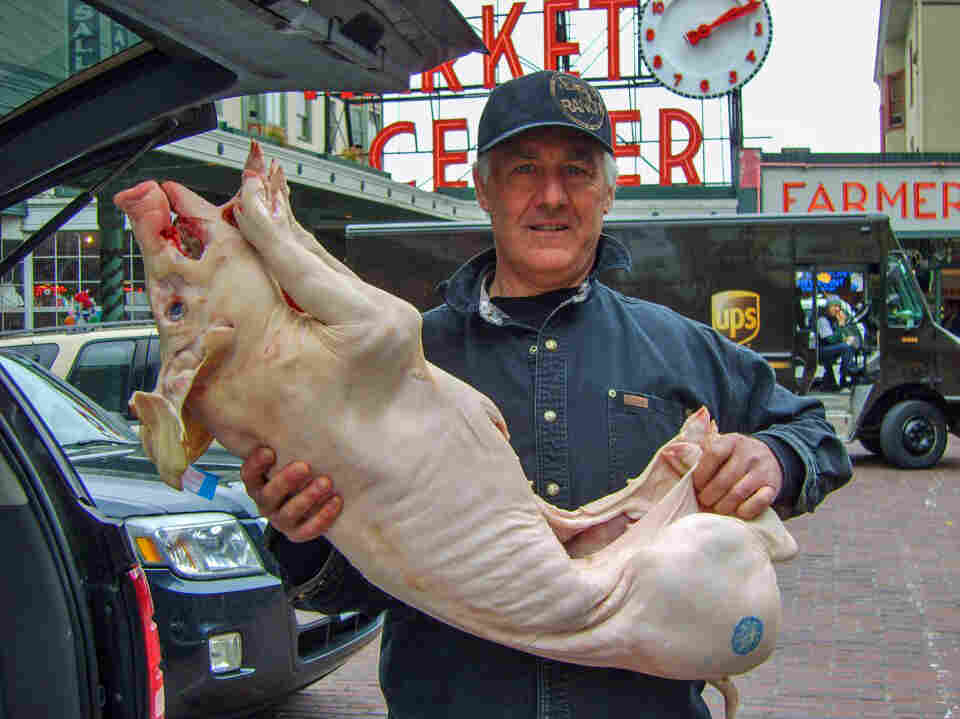 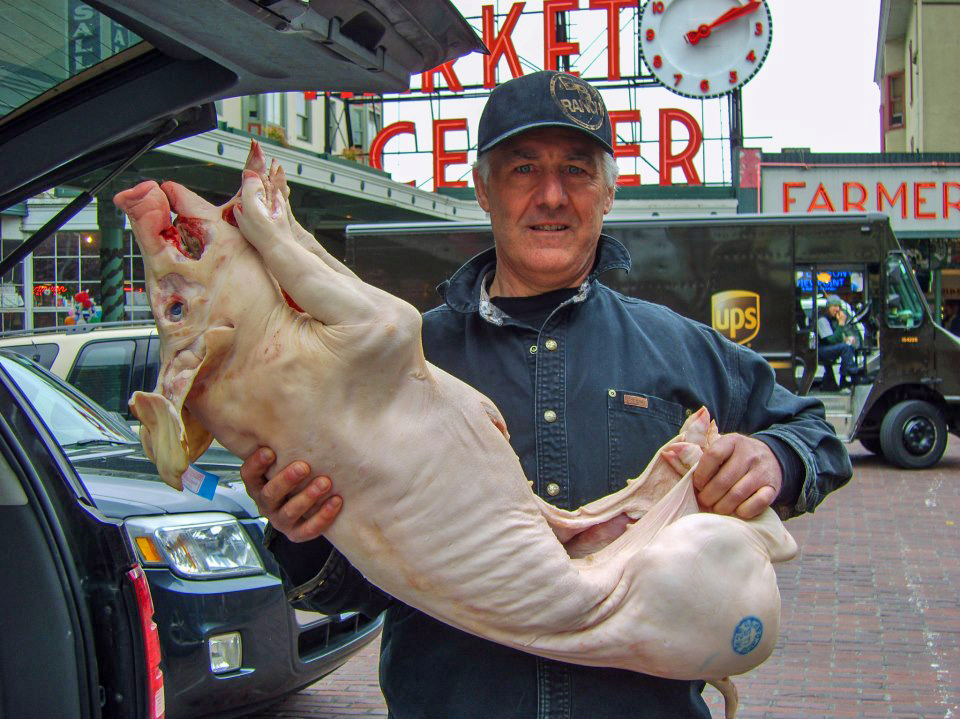 William von Schneidau, who owns the BB Ranch butcher shop at Pike Place Market in Seattle, has made prosciutto from pigs fed marijuana.

William von Schneidau, an intrepid butcher in Seattle, is giving a whole new meaning to "potbelly pig." Lately, he's been feeding marijuana refuse to the pigs he turns into prosciutto for BB Ranch, his butcher shop in the city's famous Pike Place Market.

Pot-scented bacon? Well, not quite.

The stems, leaves and root bulbs von Schneidau recoups from Top Shelf Organic, a medical marijuana dispensary, don't season the meat, he says. But the meat from the first few "pot pigs" he's butchered has been "redder and more savory" than what he usually works with, he says.

It's not clear whether the pigs feel anything from the weed in their feed, or how much, if any, THC — the psychoactive substance that gets humans high — ends up in the meat. Rather than an attempt to develop a new meaty treat for stoners, the "pot pig" experiment seems mostly to be an (effective) publicity stunt. Von Schneidau's first Pot Pig Gig event — where he promoted the product, as well as other local foods — sold out quickly. And he says all the media attention he has gotten is generating lots of interest in the next event he's planning.

Still, von Schneidau's creative reuse of a local waste product is part of a larger trend of small farmers looking for new, free sources of livestock feed, especially since prices for corn and soy have been on the rise. In addition to the pot refuse, von Schneidau has linked up ranchers and farmers in the region with a vodka distillery and with vegetable vendors at Pike Place Market who have waste that would otherwise end up as compost or in the landfill.

As we've reported, high feed prices have led some farmers elsewhere to seek out food scraps and even bakery byproduct — bread, dough, pastries and cereal — for their pigs and cattle.

Pigs have stomachs pretty similar to humans and can eat just about anything we eat. But we couldn't find any research on what happens when you feed them marijuana.

Scientists at the European Union Food Safety Authority looked into the safety of using hemp, a plant that's a close relative of marijuana, in feed for dairy cows. When the cows were fed hemp plants, enough THC made its way into their milk that the scientists recommended prohibiting its use. (However, feeding the cows hemp seeds was just fine, they found.)

Von Schneidau says he's all for finding out what his dietary supplement is doing for his pigs.

"If we had a vet that stepped up to the plate and wanted to check out their joints and mood, and what drugs make pigs happy, that would be great," he says. "But me, I just get out there, and cut them up, and put them on a BBQ, and eat them."