Accessibility links
Giant Renaissance Food People Descend Upon New York : The Salt Giuseppe Arcimboldo was a 16th-century artist who made food the building blocks of his fantastical portraits. His works have been reinterpreted as colossal statues that interact with the environment.

It takes a lot of chutzpah to reduce one of the most powerful men on Earth to a pile of fruits and vegetables.

Luckily for art lovers, Giuseppe Arcimboldo had nerve to spare. 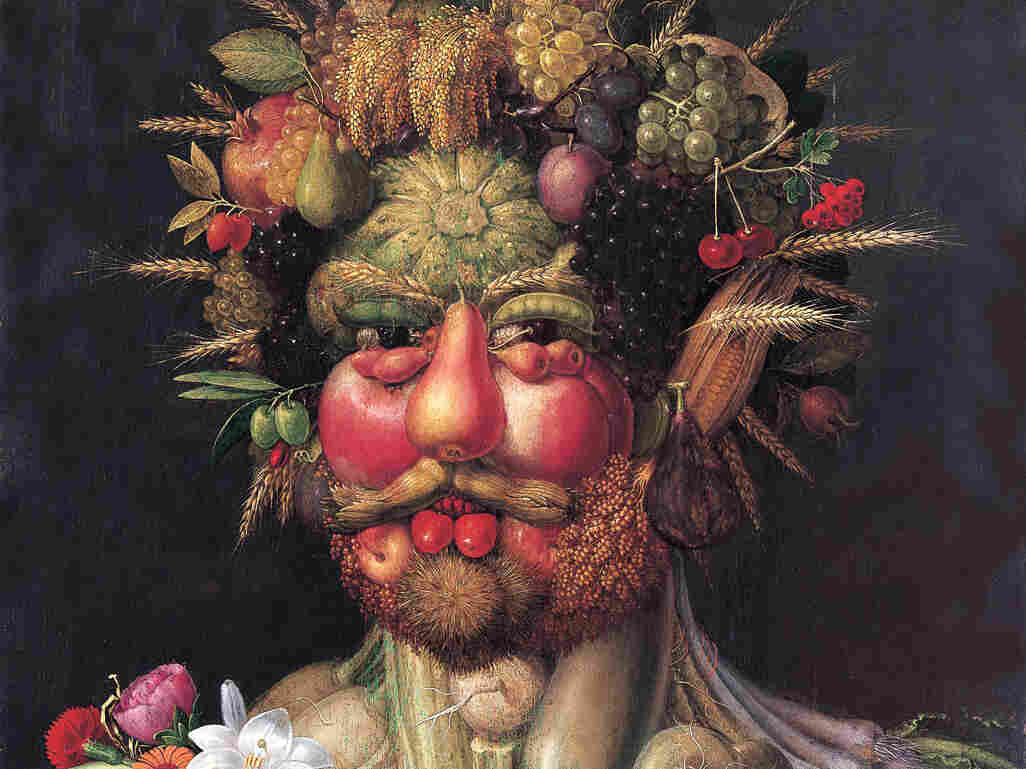 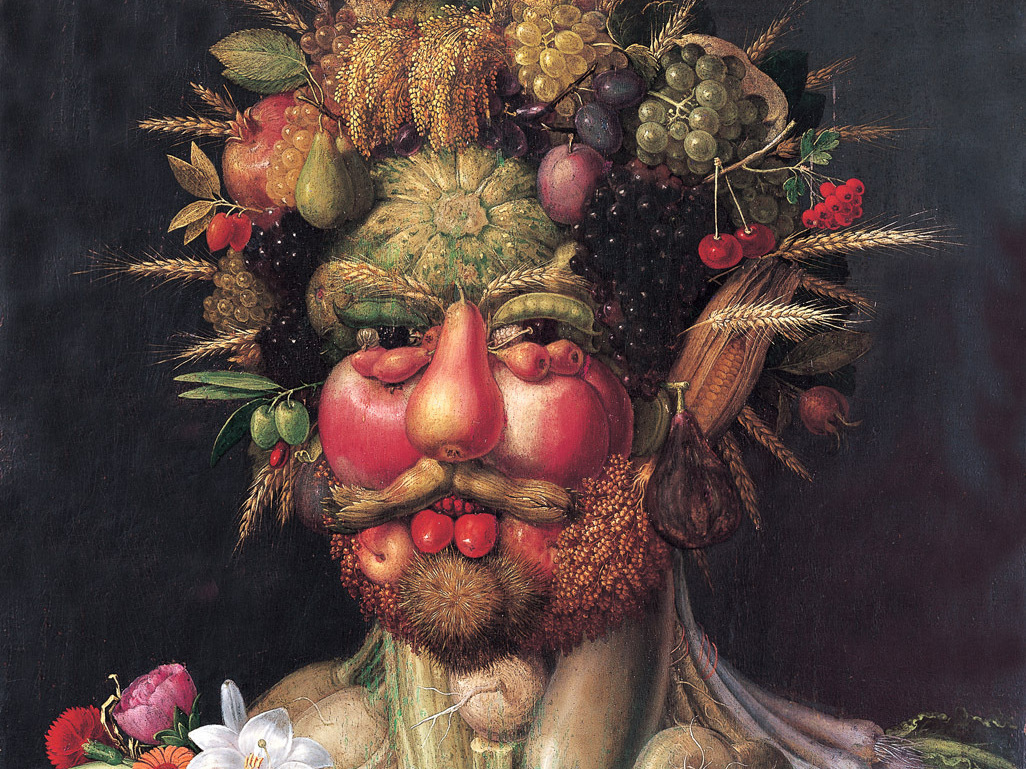 Arcimboldo created this unorthodox produce portrait of Holy Roman Emperor Rudolph II back in 1590. By that time, the Italian artist had been painting for the emperor and his powerful Habsburg family for more than 25 years, so presumably, they'd grown used to his visual jokes. (The emperor has "peachy" cheeks and "ears" of corn, get it?)

Though he also dabbled in the angels and saints that were the standard stuff of art in his day, Arcimboldo is best known for his "scherzi" or "capricci" — "meaning jokes or games," as David Brown, a curator at the National Gallery of Art, explains in this video.

"It's very clear that's how they were meant to be seen," Brown says. "They were a source of amusement or entertainment, because there was this element of surprise."

That they also often feature an element of fruits, berries or other foods is partly a reflection of the Renaissance blossoming of natural sciences, like botany.

"At a distance, they just look like heads in profile or three-quarter view," Brown says. "Up close, they look like an incredible variety of nature's wonders."

That talent for upending the viewer's expectations helps explain why Arcimboldo — whose work, Brown says, fell into "virtual oblivion" after his death — found new champions among 20th-century modernists. (Picasso and Salvador Dali were among his fans).

The latest to pay homage to this Renaissance man is American Philip Haas, an Oscar-nominated filmmaker (for Angels and Insects) and contemporary artist. This weekend, the New York Botanical Garden opened a new exhibit featuring Haas' giant, 15-foot-high fiberglass sculptures based on Arcimboldo's "Four Seasons" — winter, spring, summer and fall personified as people, crafted of foods, trees and other natural elements. 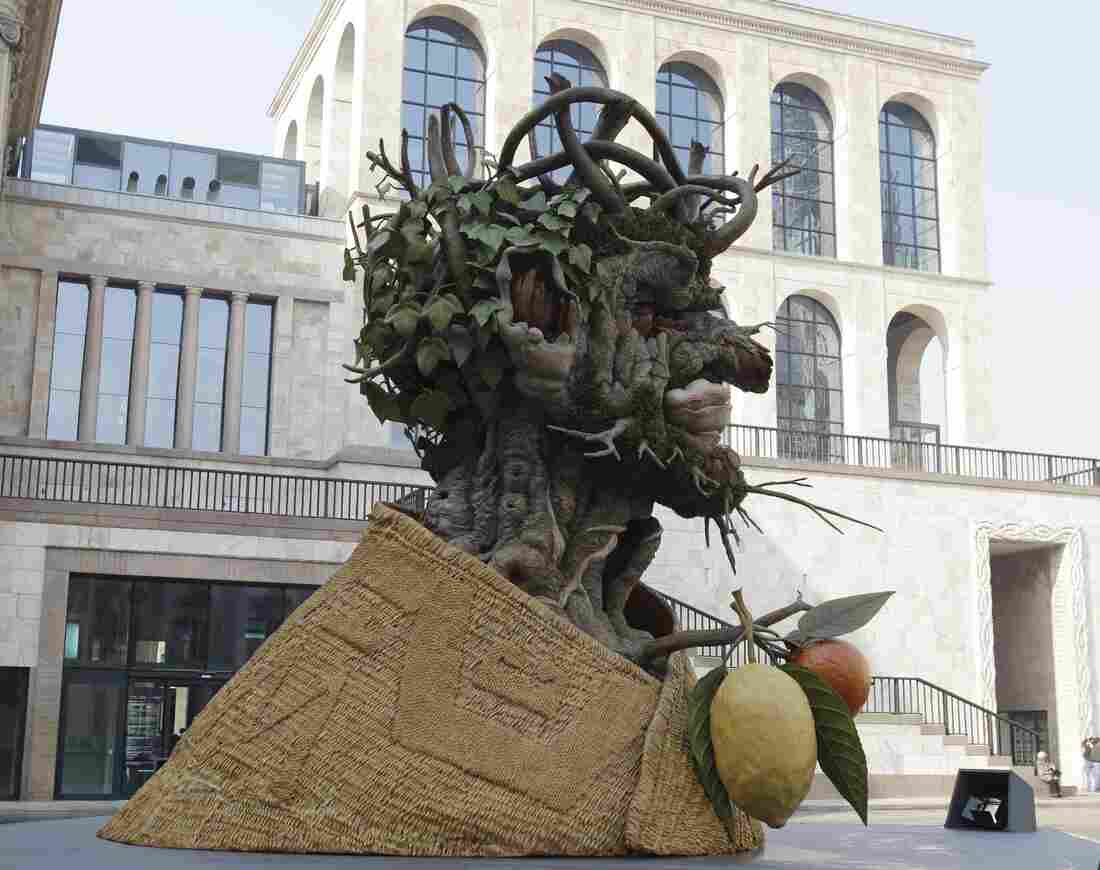 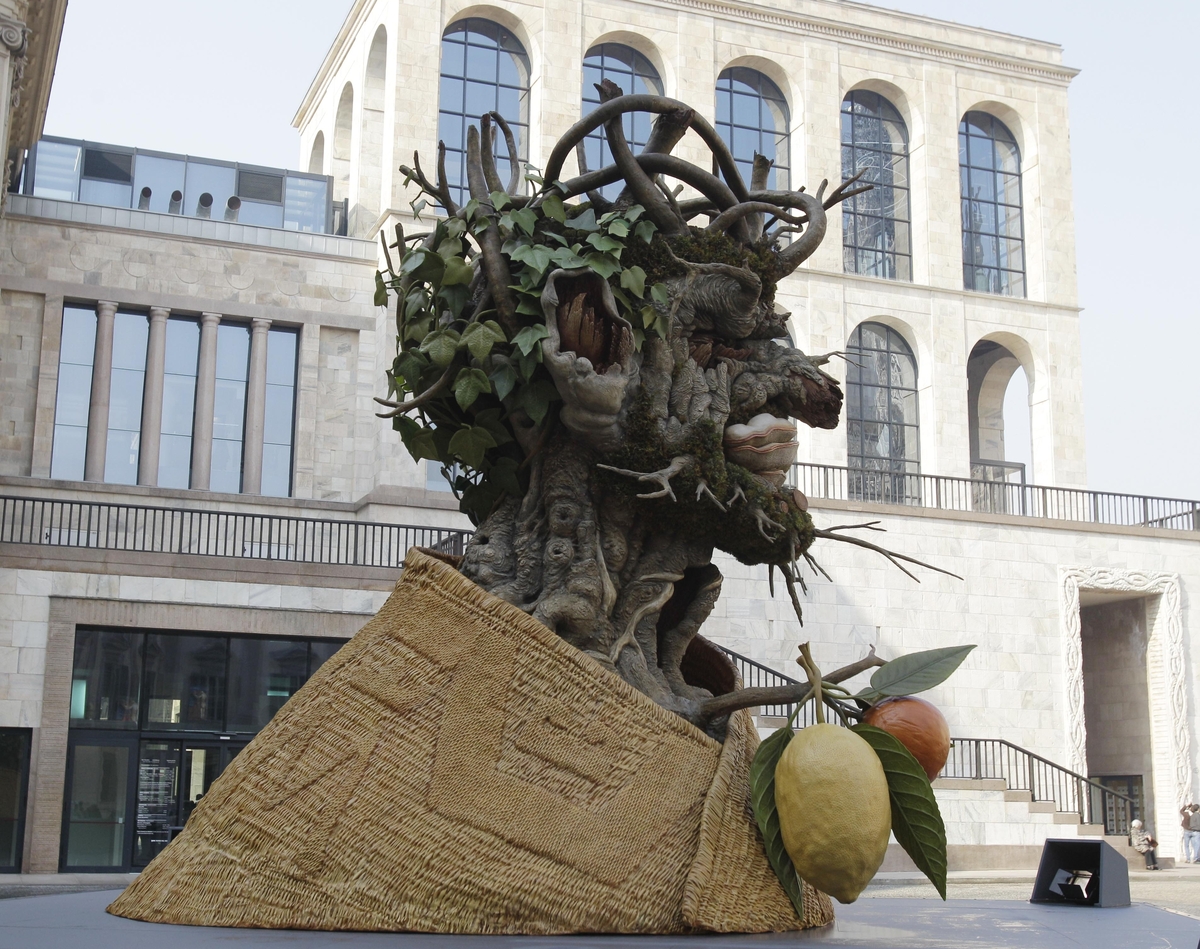 As in the originals, Haas' sculptures contain clues to the foods of the 16th century, when Arcimboldo painted. Winter is a craggy-faced old man, and his "cravat" is made of oranges and lemons — imported from the warmer south, they were one of the few fruits that could be seen in Renaissance Italy during the colder months. 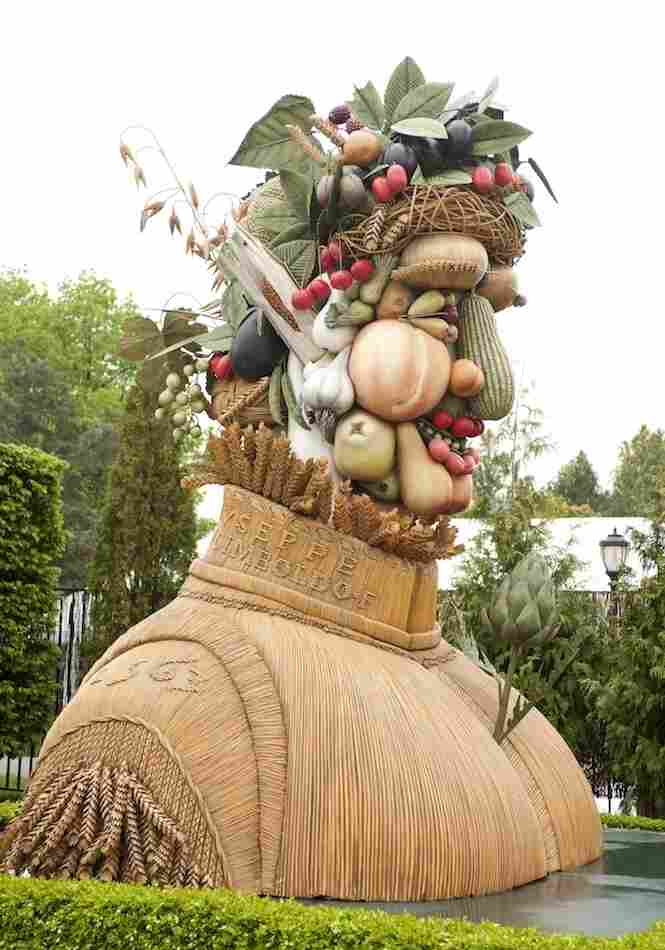 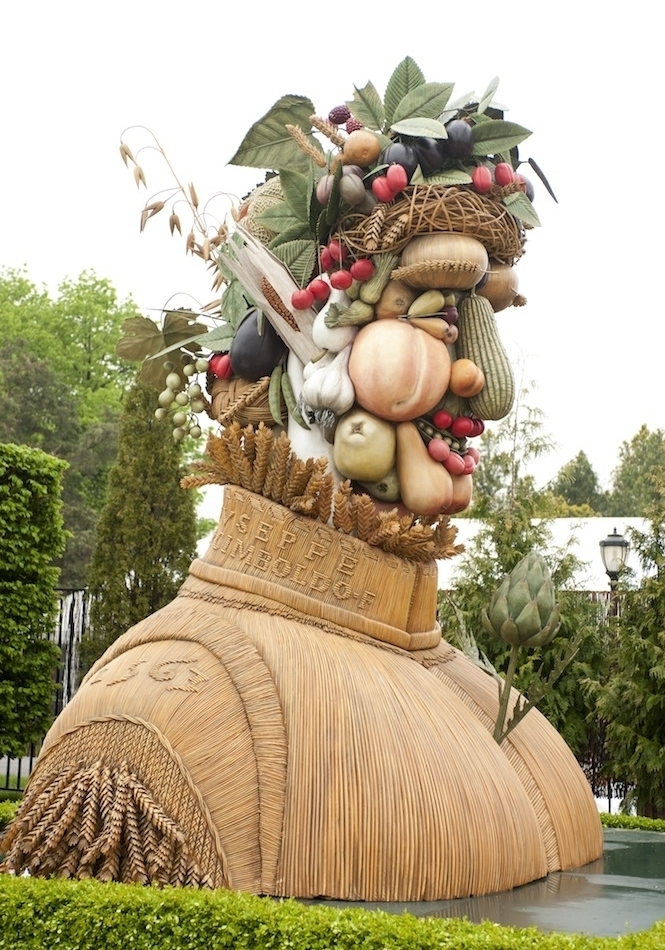 Summer's bounty — in the shape of a young man, naturally — includes eggplant in his skull and corn ears, two crops introduced to Europe from Asia and the New World. 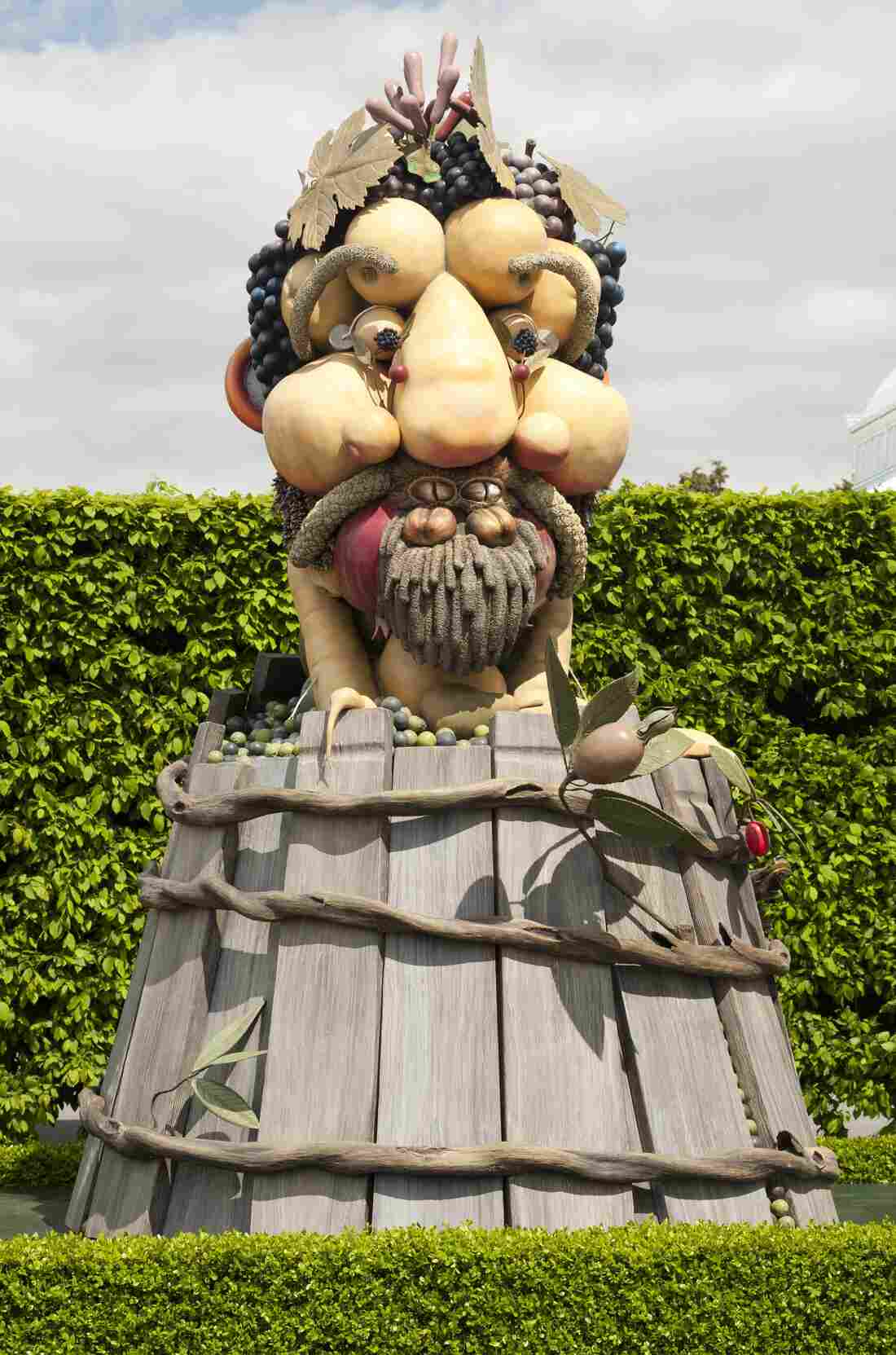 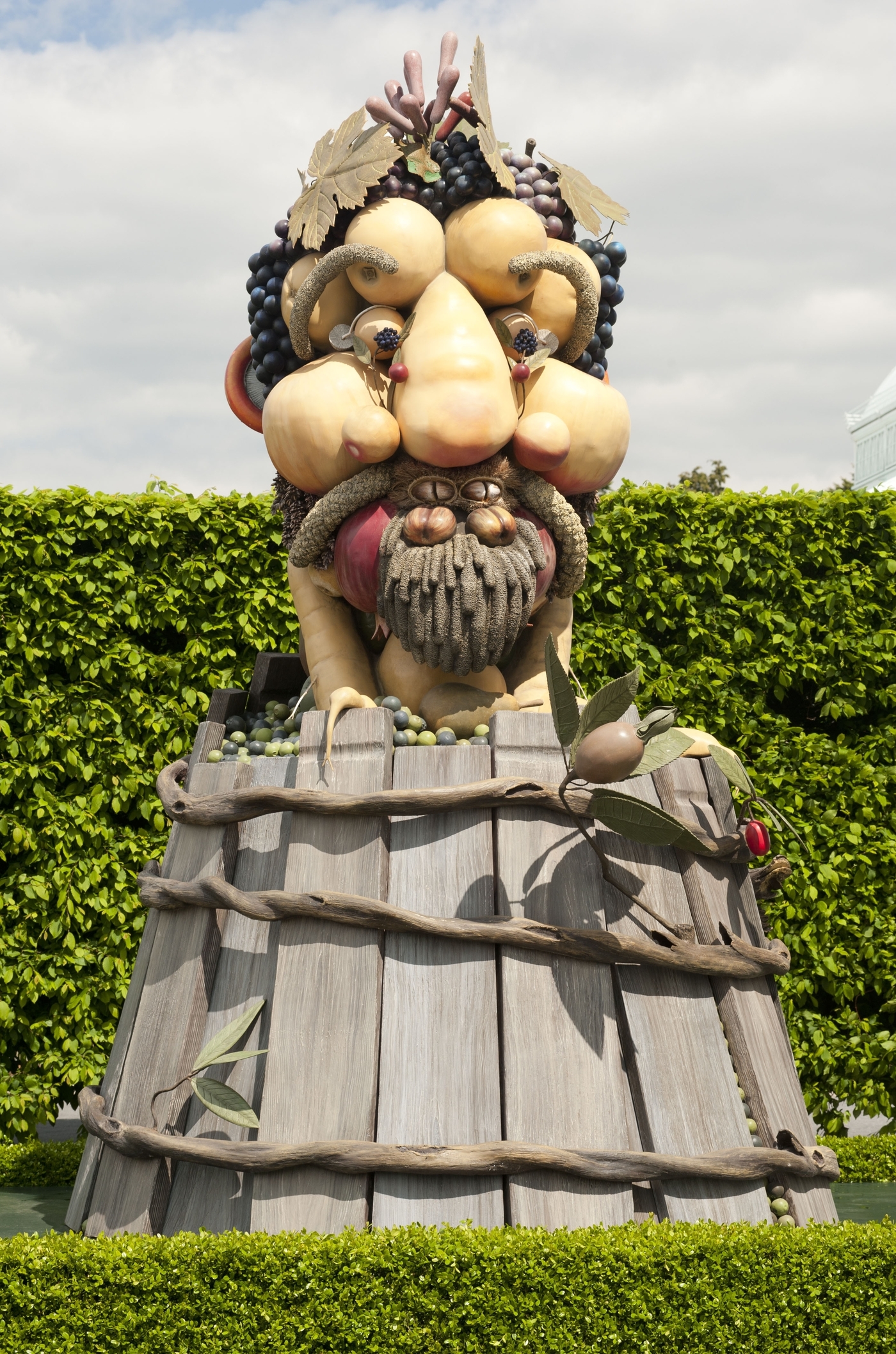 A fall-ripening gourd caps Autumn's head. Figs dangle from his ears. The grapes that tumble from his head like hair and fill his wooden barrel chest both nod to Italy's fall wine-making season.

Like Arcimboldo, Haas says he was attracted by the idea of playing with context and viewer's expectations. "Arcimboldo was making a painting from the natural world, and then he turned it into a painting and [others] stuck it in a museum," Haas tells The Salt. "I took it out of the museum and put it back into the natural world."

The sculptures have been on a tour of Europe and the U.S., where they were most recently on display at the Desert Botanical Garden in Phoenix.

By transforming Arcimboldo's seasons into colossal 3-D sculptures, Haas says he aims to change how the viewer experiences not just the art but the natural world that surrounds them, too.

"Summer's head has a cucumber for a nose," he notes. "When that head was in Phoenix, suddenly it looks like a cactus. The works are quite elastic — they respond to the environment."