Accessibility links
Vertical 'Pinkhouses:' The Future Of Urban Farming? : The Salt Architects have come up with spectacular concepts for vertical farms that would grow crops in city skyscrapers. But many horticulturists think the future of vertical farming isn't in skyscrapers, but rather in large, indoor warehouses lit up magenta by superefficient LEDs. 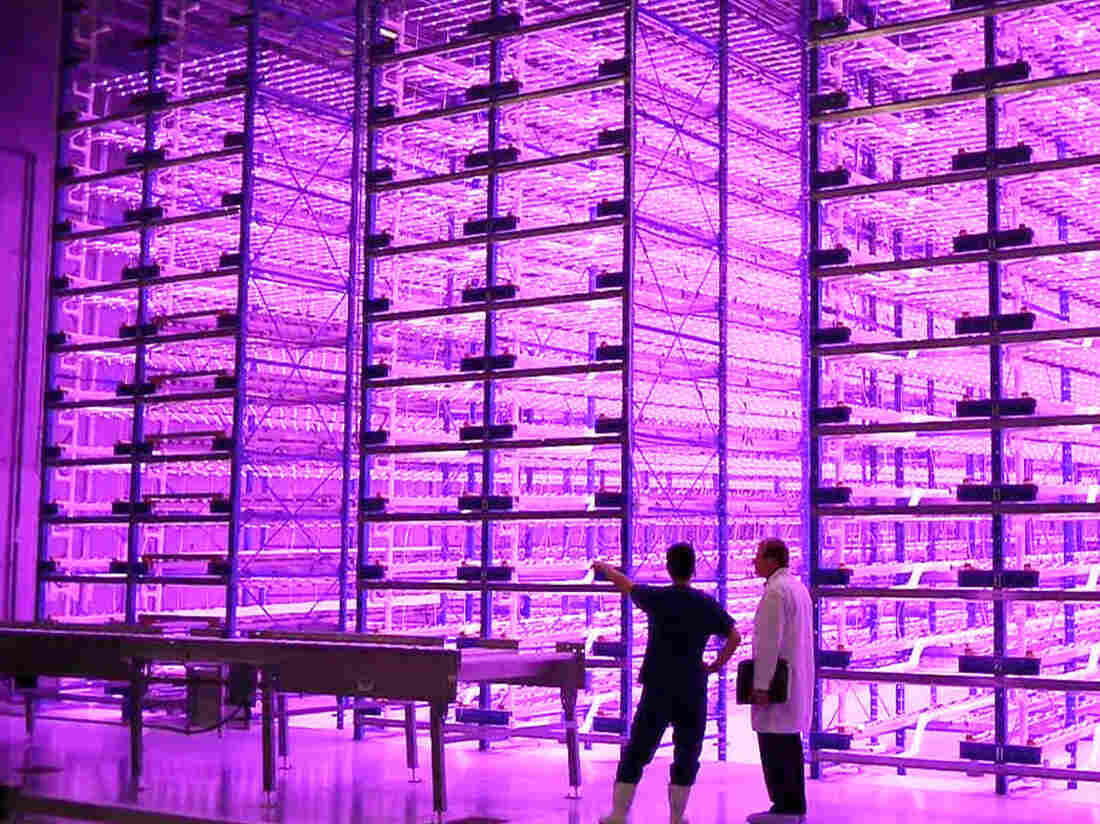 This "pinkhouse" at Caliber Biotherapeutics in Bryan, Texas, grows 2.2 million plants under the glow of blue and red LEDs. Courtesy of Caliber Therapeutics hide caption 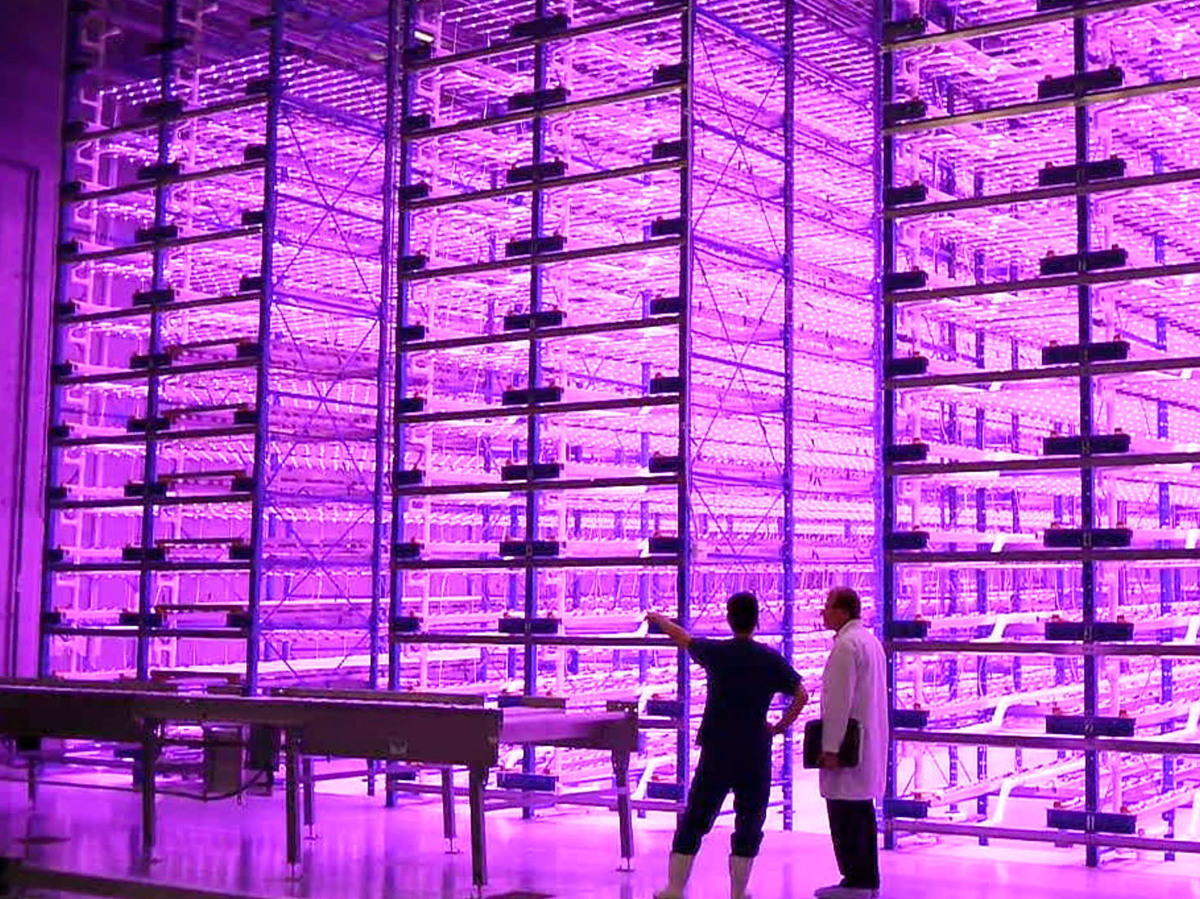 This "pinkhouse" at Caliber Biotherapeutics in Bryan, Texas, grows 2.2 million plants under the glow of blue and red LEDs.

The idea of vertical farming is all the rage right now. Architects and engineers have come up with spectacular concepts for lofty buildings that could function as urban food centers of the future. 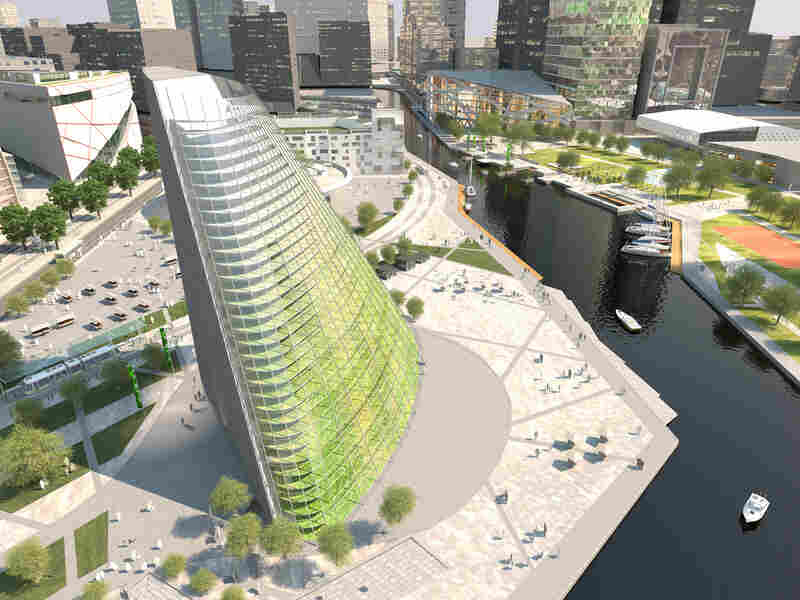 An artist's rendering of what a planned vertical farm in Linkoping, Sweden, will look like. Courtesy of Plantagon hide caption 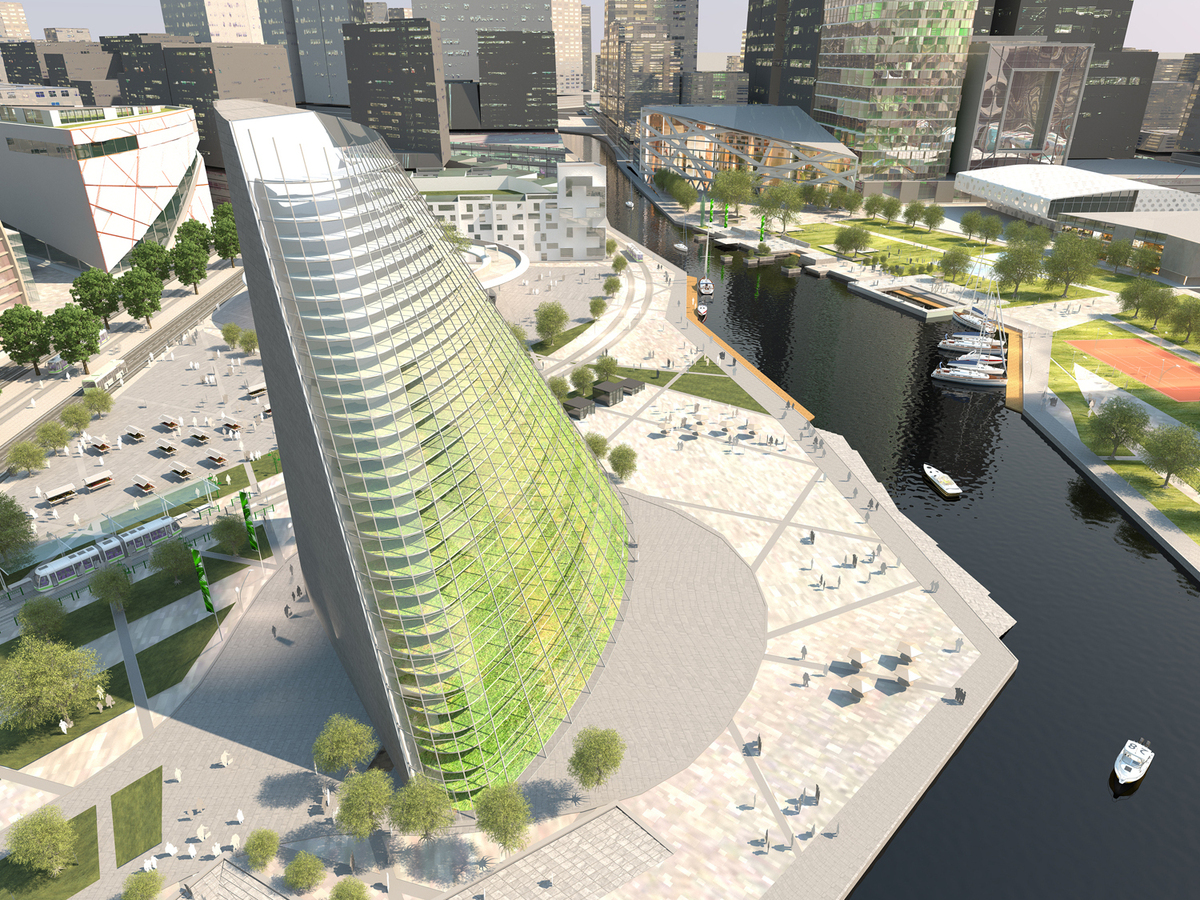 An artist's rendering of what a planned vertical farm in Linkoping, Sweden, will look like.

In Sweden, for example, they're planning a 177-foot skyscraper to farm leafy greens at the edge of each floor. But so far, most vertical gardens that are up and running actually look more like large greenhouses than city towers. And many horticulturists don't think sky-high farms in cities are practical.

"The idea of taking a skyscraper and turning it into a vertical farming complex is absolutely ridiculous from an energy perspective," says horticulturist Cary Mitchell of Purdue University, who's been working on ways to grow plants in space for more than 20 years.

The future of vertical farming, Mitchell thinks, lies not in city skyscrapers, but rather in large warehouses located in the suburbs, where real estate and electricity are cheaper.

And oh, yeah, instead of being traditional greenhouses lit by fluorescent lamps, he says these plant factories will probably be "pinkhouses," glowing magenta from the mix of blue and red LEDs.

Light is a major problem with vertical farming. When you stack plants on top of each other, the ones at the top shade the ones at the bottom. The only way to get around it is to add artificial light — which is expensive both financially and environmentally.

Vertical farmers can lower the energy bill, Mitchell says, by giving plants only the wavelengths of light they need the most: the blue and red.

"Twenty years ago, research showed that you could grow lettuce in just red light," Mitchell says. "If you add a little bit of blue, it grows better."

Plant's photosynthesis machinery is tuned to absorb red and blue light most efficiently. They have a handful of other pigments in their leaves that catch other wavelengths, but the red and blue wavelengths are the big ones, supplying the majority of the light needed to grow. 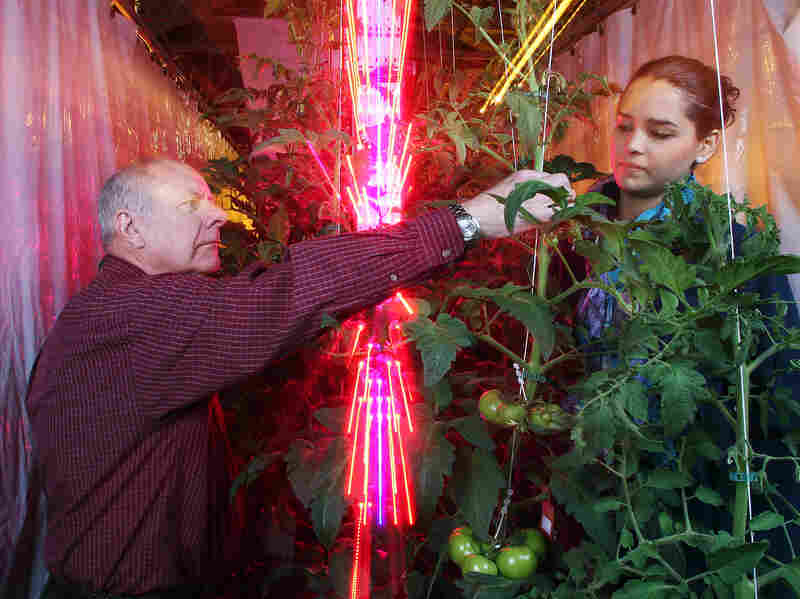 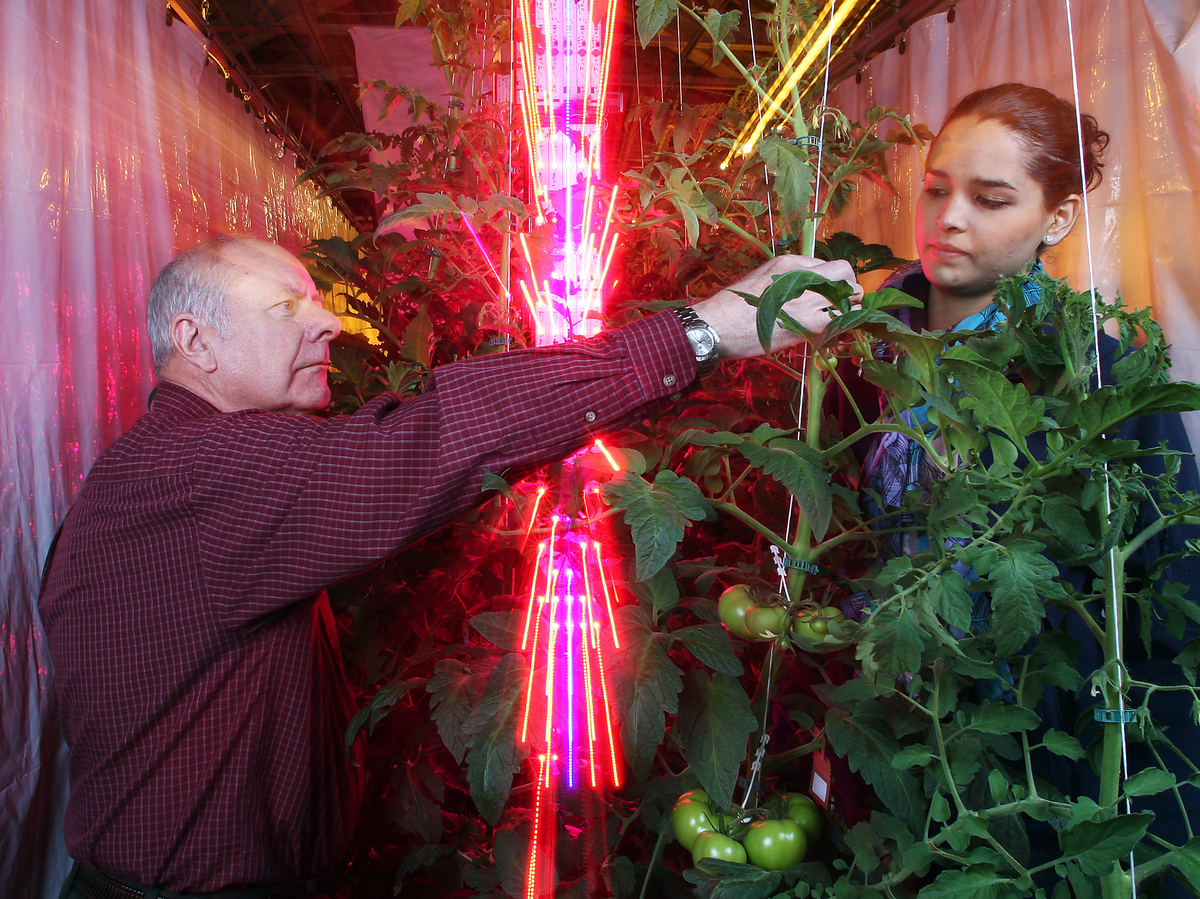 Cary Mitchell and Celina Gomez, of Purdue University, harvest tomatoes grown next to a tower of blue and red LEDs.

So why LEDs? They're super energy efficient in general, but unlike traditional greenhouse lamps, they can be tuned to specific wavelengths. Why use all of ROYGBIV when just RB will do?

And there's another advantage to using LEDs in greenhouses and vertical farming, Mitchell says: Because these lights are cooler, you can place them close to the plants — even stacked plants — and lose even less energy.

Recently, Mitchell and his graduate student designed a 9-foot-tall tower of lights and grew tomato plants right up against it. "As the plants get taller, we turn on the [light] panels higher up," he explains. "It takes about two months before all the panels are on."

The towers cut energy consumption by about 75 percent, Mitchell and his team reported earlier this year.

Right now, experiments are using these specialized LEDs to supplement natural light, not replace it.

But as LEDs get more and more efficient, could growers forgo the natural light altogether and grow crops completely in enclosed rooms, where they're protected from temperature changes or damaging pests?

His farms have never seen the light of day. 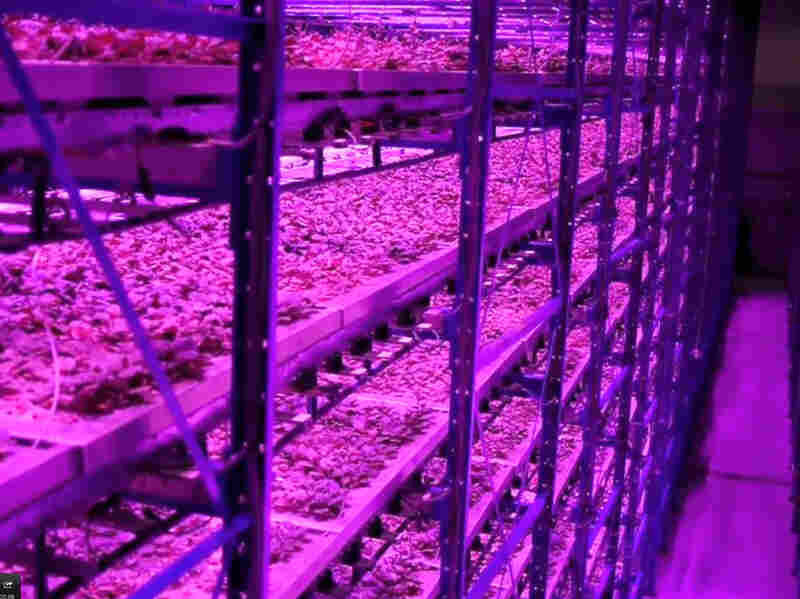 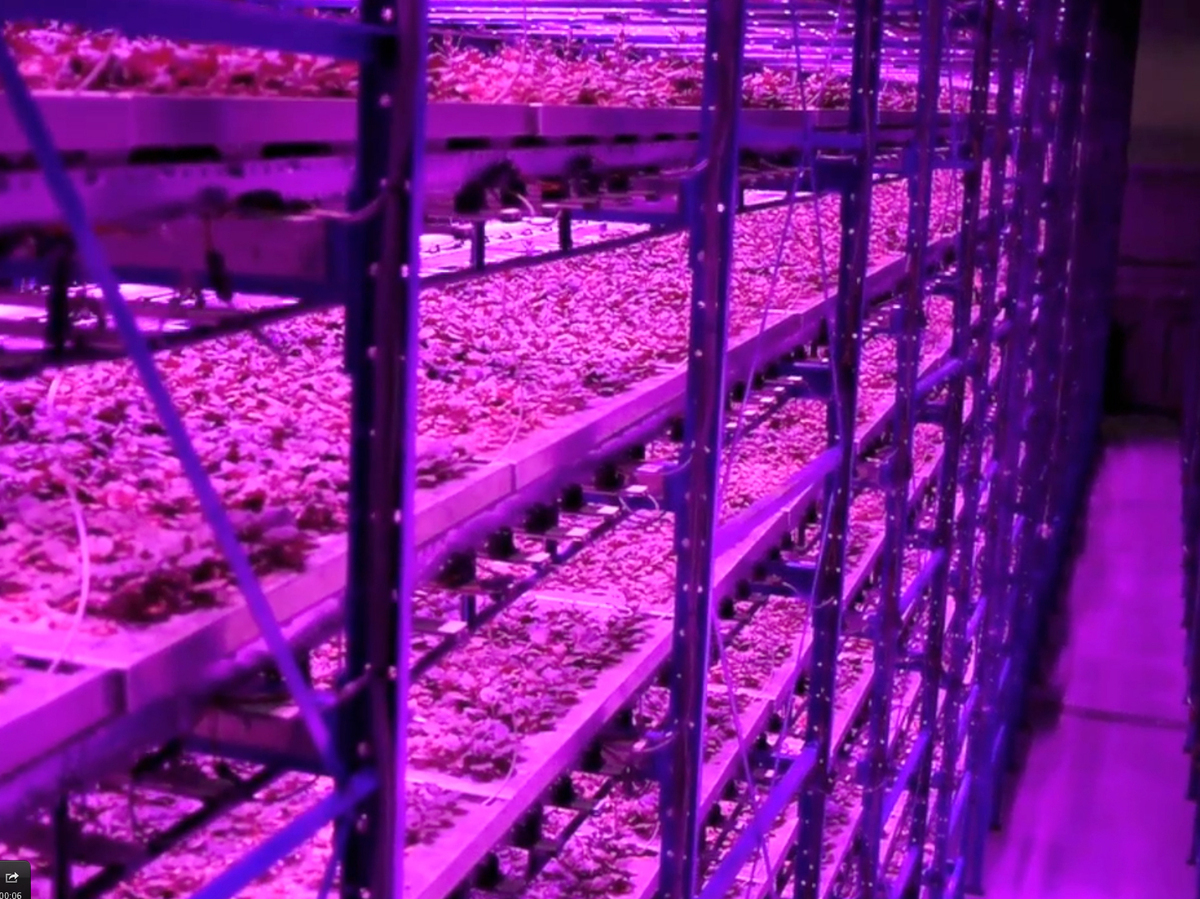 Plants at Caliber Biotherapeutics grow under blue and red LEDs, with wavelengths of light that match those that get absorbed by the photosynthetic machinery.

He and his company have built a 150,000-square-foot "plant factory" in Texas that is completely closed off from the outside world. They grow 2.2 million plants, stacked up 50 feet high, all underneath the magenta glow of blue and red LEDS.

"A photon is a terrible thing to waste," Holtz tells The Salt. "So we developed these lights to correctly match the photosynthesis needs of our plants. We get almost 20 percent faster growth rate and save a lot energy."

Holtz is growing a tobacco-like plant to make new drugs and vaccines. The indoor pinkhouse gives him tight control over the expensive crops, so his team can stop diseases and contamination.

Holtz says this type of indoor gardening isn't going to replace traditional farms anytime soon. It's still relatively expensive for growing food. "We couldn't compete with iceberg lettuce farmers," he says, "but for certain specialty crops, the economics wouldn't be so bad."

And, he says, the pinkhouse is actually quite efficient when it comes to water and electricity. "We've done some calculations, and we lose less water in one day than a KFC restaurant uses, because we recycle all of it."