Accessibility links
Personalized Coca-Colas, But Not If Your Name Is Mohammed Or Maria : The Salt As part of its new marketing campaign, the beverage giant is printing popular first names on labels of Coke, Diet Coke and Coke Zero. But already, there's a backlash from people left feeling excluded.

Personalized Coca-Colas, But Not If Your Name Is Mohammed Or Maria

Personalized Coca-Colas, But Not If Your Name Is Mohammed Or Maria 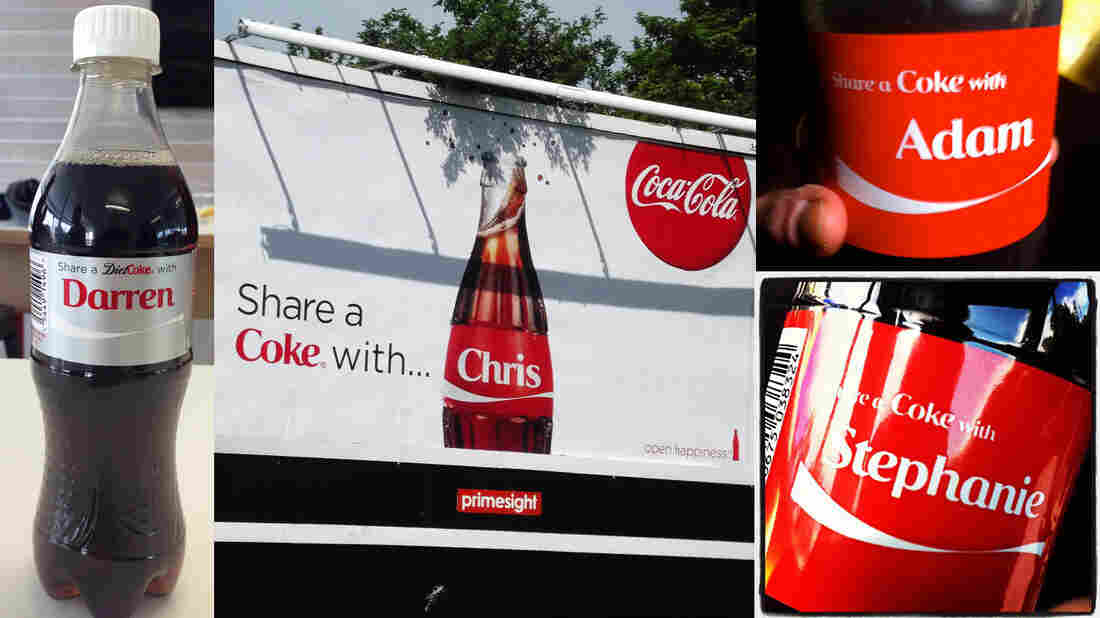 Remember the disappointment you felt as a kid at the souvenir shop when that personalized key chain wasn't available in your name? For me, it was never finding "Allison" with two L's. My colleague Maria says she was always stuck with "Mary" as her only option.

Facebook fans of Coca-Cola's new "Share a Coke" campaign are having similar frustrations. As part of its new campaign, which recently launched in Europe, the soda giant is printing popular first names on labels of Coke, Diet Coke and Coke Zero.

"What about my name?" writes Cinnamon Francis-Burnett on Facebook. And Melanie Price-Morgan asks, "Will you be having a Melanie bottle out soon please?"

The campaign, presumably, is aimed at getting consumers to "connect" with the brand in a more personal way. But already there's a bit of a backlash.

In Israel, there's a brouhaha over the exclusion of Arabic names such as Mohammed. And according to this Washington Post article, one Arab-Israeli citizen has raised legal concerns, calling the campaign discriminatory.

Meanwhile, in Sweden, where Mohammed is not an uncommon male name, members of the Muslim community have asked that the name not appear as part of the personalized bottle campaign, according to this article in the trade publication Food & Drink Europe.

The Muslim community's "feedback to us was they'd rather not see the name on commercial products," Peter Bodor of Coca-Cola Enterprises Sweden told Food & Drink Europe.

So, if Coke were to introduce the "Share a Coke" campaign here in the United States, what would the top names be?

Earlier this month, the Social Security Administration released its list of top baby names for infants born in the U.S. during 2012. Jacob, Mason, Ethan and Noah are the leading boys' names. For girls, Sophia, Emma, Isabella and Olivia top the list.

Mohammed (regardless of whether it's spelled Mohamed or Muhammad) comes nowhere near the top 100 baby names on the agency's list. And Maria? No personalized Coke Zero for her, either. That name barely misses the top 100 — coming in at No. 101.

Interestingly, the girl's name that has leapt the farthest on the list is Arya, according to this CNN post. Sound familiar? It happens to be the name of a popular character on the HBO hit Game of Thrones, based on the Song of Ice and Fire series of books.

Now, assuming that Coke wants to appeal to millennials, it would probably go for the most popular names of 20-year-olds. So, here you have it — the top baby names from 1993: