Accessibility links
Farm Free Or Die! Maine Towns Rebel Against Food Rules : The Salt The Fourth of July is still days away, but in Maine, local food activists have already declared their independence. Ten towns so far have passed laws that essentially say local food producers don't have to abide by state or federal regulations if they are selling directly to consumers. And the revolutionary fervor has reached the statehouse. 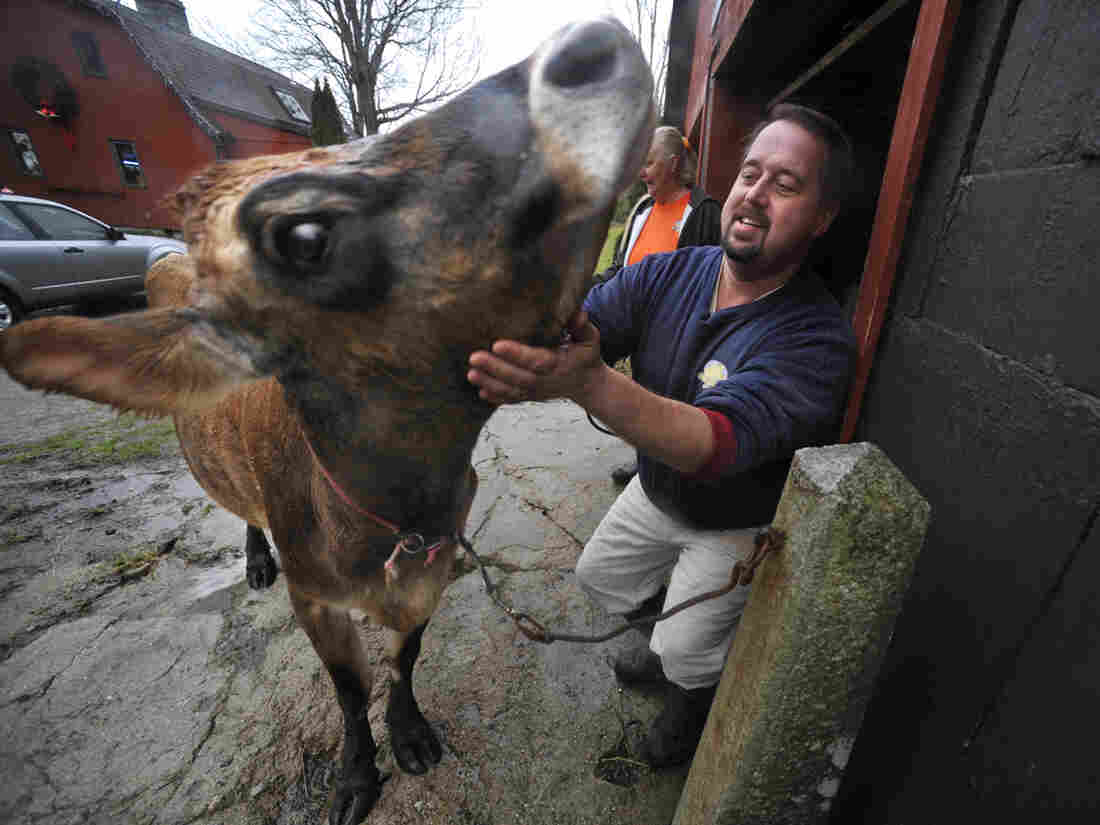 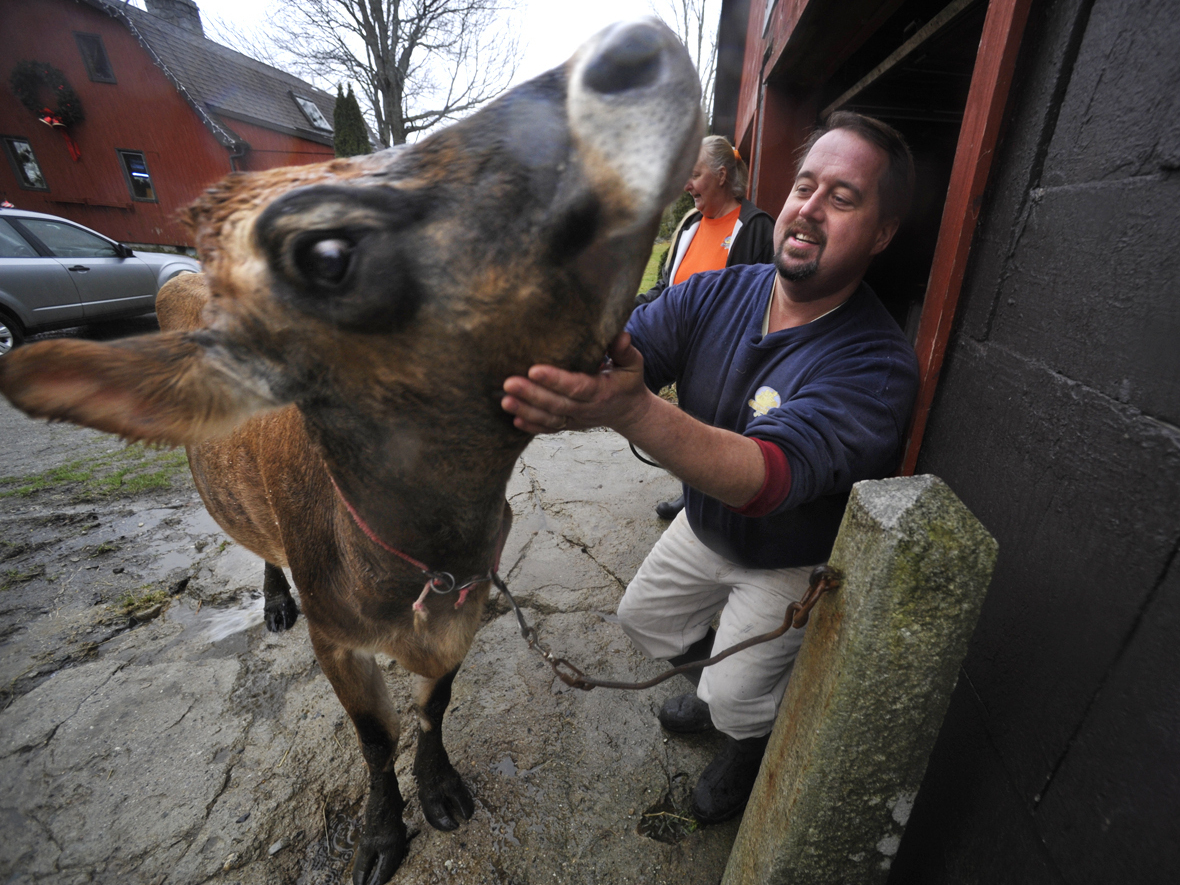 Dan Brown pets "Sprocket," his family's 4-year-old, sole milking cow, before hosing her down at his farm in Blue Hill, Maine. Brown has become the poster child for Maine's food sovereignty movement.

New Englanders have never been shy about revolting against what they see as unfair food regulations. Remember that whole Boston Tea Party thing?

So perhaps it's not so surprising that in Maine, towns have been staging another revolution: They've declared independence from state and federal regulations on locally produced foods.

In May, the tiny Isle of Haut became the 10th town in the state to pass what's known as a food sovereignty ordinance. Essentially, these resolutions claim that small local food producers don't have to abide by state or federal licensing and inspection regulations if they are selling directly to consumers.

The idea is to spare farmers from burdensome regulations that are "squeezing the smallest of the small," says Bob St. Peter of the advocacy group Food For Maine's Future.

St. Peter helped draft one of the first local food sovereignty resolutions, passed in Blue Hill, Maine, back in 2011. That declaration of independence, he tells The Salt, was inspired in part by bureaucratic bumbling over chickens. 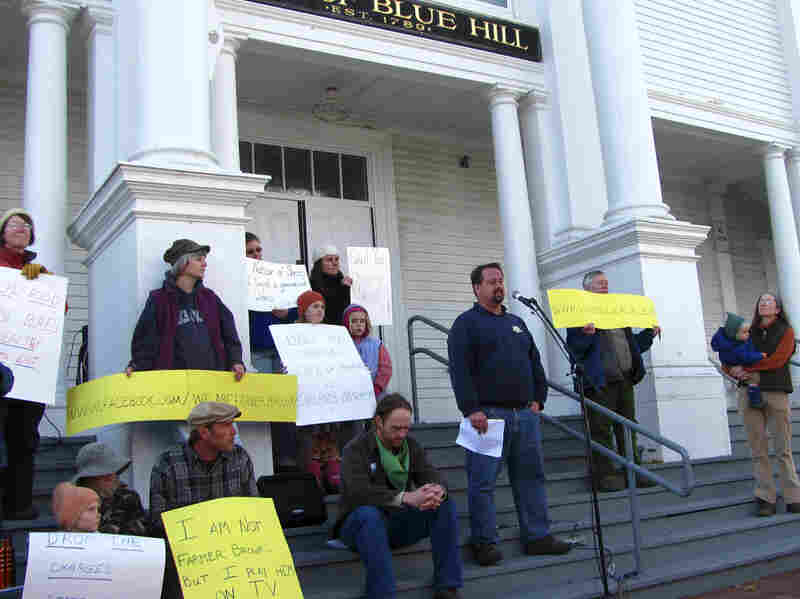 More than 150 people gather to hear farmer Dan Brown speak in 2011. The Maine Department of Agriculture filed suit against Brown, alleging that he was illegally selling unpasteurized milk without a license. Brown, meanwhile, insisted that a local food ordinance adopted by Blue Hill residents protects the rights of farmers to sell directly to consumers without a license. Kevin Miller/Bangor Daily News hide caption 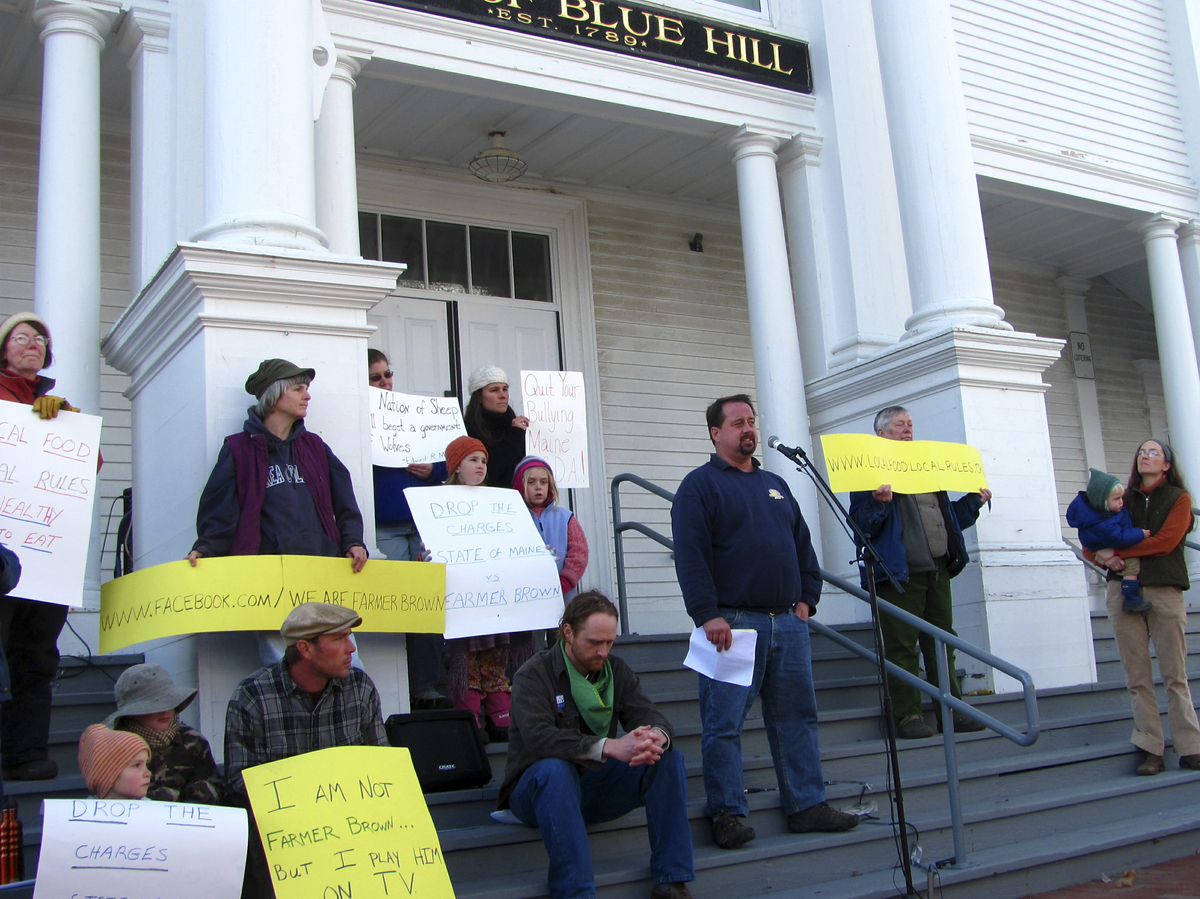 More than 150 people gather to hear farmer Dan Brown speak in 2011. The Maine Department of Agriculture filed suit against Brown, alleging that he was illegally selling unpasteurized milk without a license. Brown, meanwhile, insisted that a local food ordinance adopted by Blue Hill residents protects the rights of farmers to sell directly to consumers without a license.

Maine had passed a law that allowed small-scale poultry producers — those selling less than $1,000 worth per year — to slaughter the birds on their farms instead of at a slaughterhouse. The goal was to help more farmers get into the poultry game, but when state regulators wrote up rules for how the home slaughtering would work, they came up with a scheme that would cost a poultry farmer some $30,000 to $40,000 to implement, he says.

"They took this exemption and made it worthless, basically," says St. Peter.

So Blue Hill and other towns revolted, passing laws that claimed local food sovereignty rights — rights that contradicted state rules. And the idea spread. The revolutionary fervor has now reached the statehouse.

In the past two weeks, state lawmakers have acted on several bills designed to exempt small local food producers from the reach of state regulators. Some of these bills — including ones designed to fix that small-scale poultry slaughter conundrum — have already been enacted into law.

One measure that failed to pass would have made local food sovereignty the law of the state. Some state lawmakers had raised fears that if Maine relaxed its food regulations in this way, federal food-safety authorities might step up their scrutiny.

St. Peter argues that he and other local food activists don't want to eliminate regulation; they just want to self-regulate at the community level among people who know and trust each other.

"At the scale we are talking about," St. Peter says, "where you are literally giving the food to the people who will eat it in their homes ... if you're producing bad food, people are going to know about it."

But just because you know your farmer doesn't mean your farmer knows food safety, says Kevin Poland, who runs a family farm in Brooklin, Maine. He's been a vocal opponent of the local food ordinances. Maine's food regulations, he says, are pretty lax already.

"It has nothing to do with encouraging local farming," Poland tells The Salt. "There's plenty of that here. What there should be more encouragement of is food safety. The state of Maine has laws that work." And the laws that are in place are there to keep consumers safe, he says.

That's what state agricultural officials argued when they brought down the law on Dan Brown, a Blue Hill dairy farmer who operates on a very small scale: just one cow. This week, Brown was ordered to pay more than $1,000 in fines and fees for selling raw milk without a license and without proper labeling.

Raw milk sales are legal in Maine, but there are some rules about how to go about it. Brown's case has been seen widely as a test of the legality of Maine's local food sovereignty revolution: Brown had claimed that Blue Hill's local food ordinance exempted him from state licensing and labeling regulations. The state disagreed, and so did the judge.

Ironically, one measure that has cleared a major hurdle in the statehouse would make it legal for small farmers like Brown to sell up to 20 gallons of raw milk a day without a license.

Even if it becomes law, it would come too late to save Brown, but the revolution marches on. (Cue the music.)

P.S.: Interestingly, the concept of food sovereignty originated not with farmers in Maine but with peasants in developing nations facing globalization. And it has spread to Europe, including farmers in Britain, as The Guardian reported this week.

P.P.S.: Yes, we know that Live Free or Die is New Hampshire's state motto, not Maine's.