Accessibility links
Michigan Tracks Cattle From Birth To Plate : The Salt Would you like to know the life history of that steak before you eat it? Technology exists to give you that information, at least in Michigan, where the state government requires all cattle to carry an electronic tag for tracking purposes. 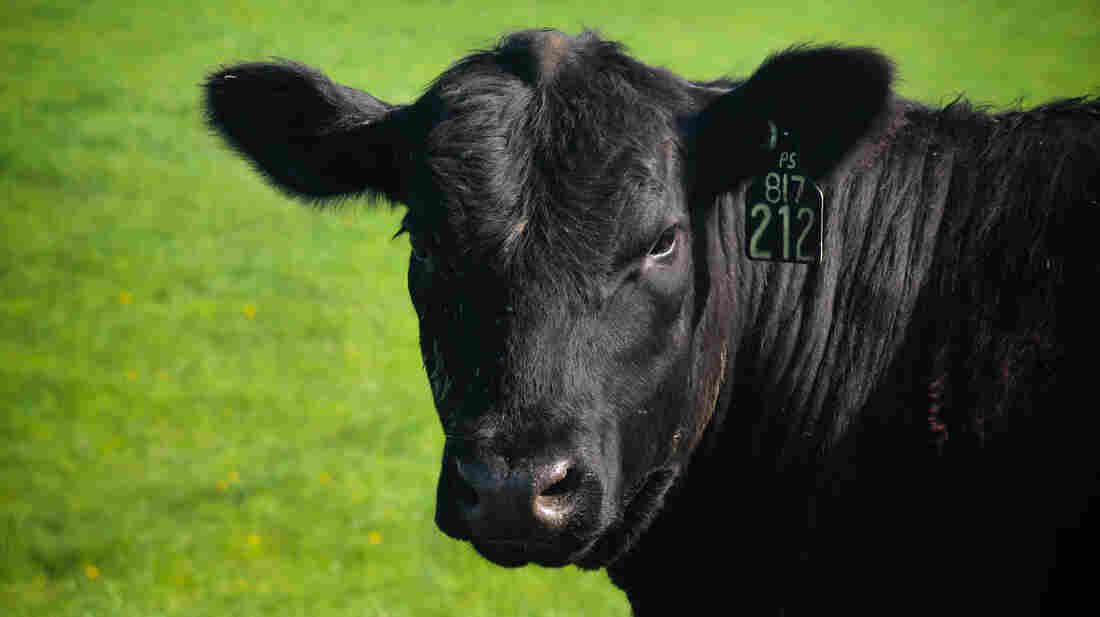 Whenever a steer or cow leaves a farm in Michigan or goes to a slaughterhouse, it passes by a tag reader, and its ID number goes to a central computer that keeps track of every animal's location. Dan Charles/NPR hide caption

When you pick up a cut of beef at the store, would you like to know that animal's life history? The technology to do this does exist — at least in Michigan, where the state requires all cattle to carry electronic ear tags. It's the only state that requires such tags.

Michigan's cattle-tracking system was forced on farmers because of a crisis. Fifteen years ago, cattle in part of the state started catching tuberculosis from wild deer.

Whenever a steer was discovered with the disease, health officials swooped in to find out what other farms the animal had passed through, what other cattle it had met along the way, because those animals might also be carrying the disease. It was a mad scramble through farmers' records.

"Farmers are busy," Halstead says. "They move animals every day. They know what they're doing, but they don't always write it down."

The confusion cost Michigan farmers real money. Until they could prove that their cattle hadn't been exposed to TB, they were banned from out-of-state markets.

So three years ago, the state of Michigan ordered cattle farmers to put special electronic tags on their animals.

Today, whenever a steer or cow leaves a farm in Michigan, or goes to a slaughterhouse, it passes by a tag reader, and its ID number goes to a central computer that keeps track of every animal's location.

If an animal is discovered to be sick, "we can track that animal all the way back, through every herd that it's been in, through any sale yard it's been through, back to the farm of origin," Halstead says.

Michigan adopted this system despite some opposition from farmers in 2007.

Around the same time, the U.S. Department of Agriculture proposed a national system just like this. The USDA said it would help control not just tuberculosis but also more frightening diseases, like foot-and-mouth or mad cow disease.

But ranchers like Debbie Davis in south-central Texas fought it off, calling it expensive and unnecessary.

"We felt like it was an invasion of privacy," she says. "It was a way for the government to monitor the number of animals we owned, watch our business practices, monitor our movements, and being independent Texans, we weren't interested in that."

The USDA dropped the requirement for electronic ID tags nationwide.

Now, though, some farmers are thinking those ID tags might have a good side. Maybe an animal that has been tracked its whole life will be worth more when it's sold. 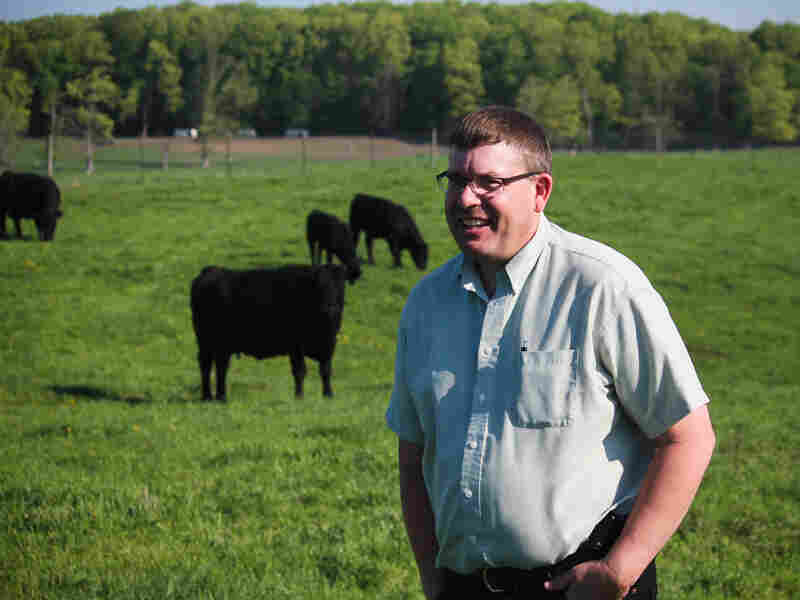 Daniel Buskirk, a professor of animal science at Michigan State University, is experimenting with the university's own cattle. Dan Charles/NPR hide caption 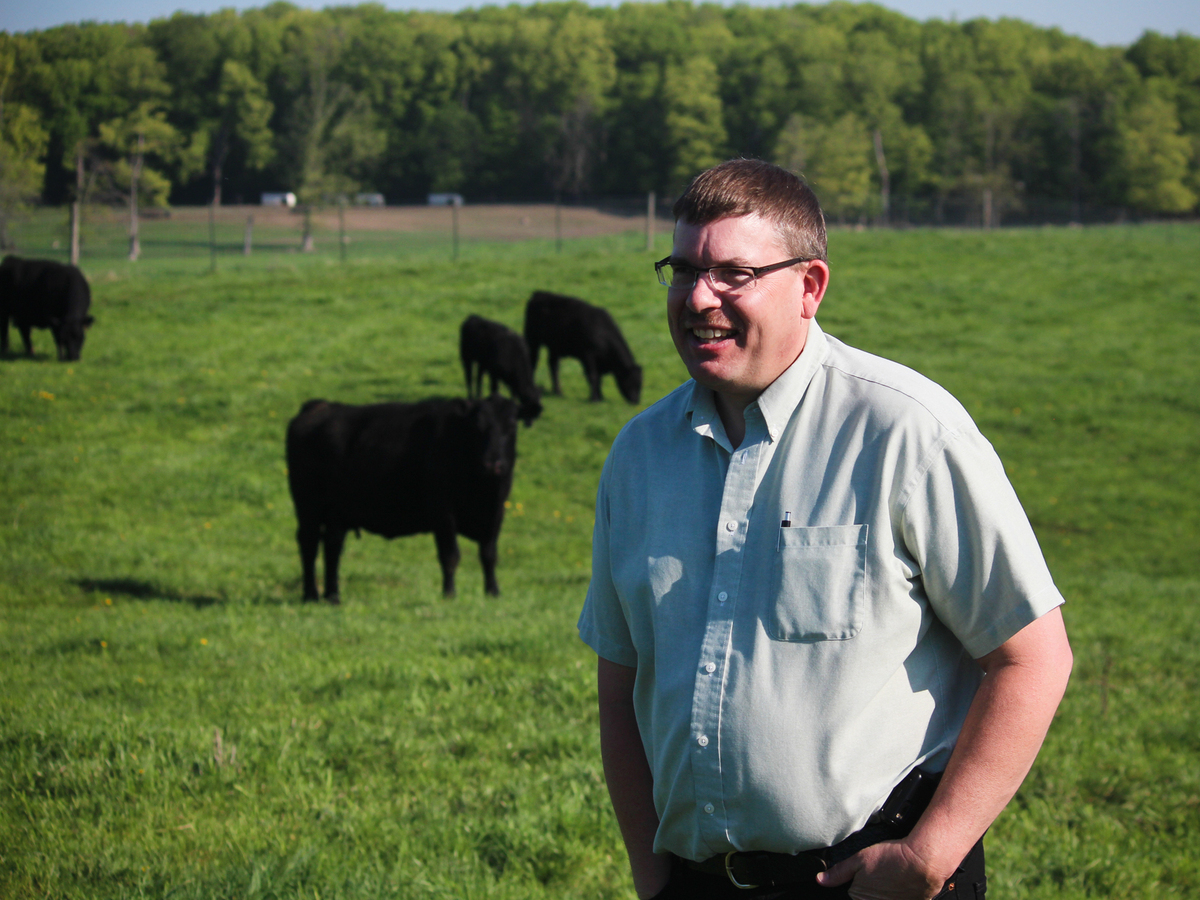 Daniel Buskirk, a professor of animal science at Michigan State University, is experimenting with the university's own cattle.

"There's a large number of people that would like to know where their food comes from, just understand that better," says Daniel Buskirk, an expert on the beef industry at Michigan State University.

He's using the university's own herd of cattle to experiment with ways to track those animals and then make information about them available to shoppers in the store.

"This is one way that we can hopefully kind of connect the story of how this food is being produced with the consumers who are consuming it," Buskirk says.

Last year, when 72 of the university's steers went to the slaughterhouse, Buskirk set up a system that transferred the identity of each animal from its electronic ID tag to a new set of tags — little square bar codes.

Those bar codes were pinned to the carcass. And as butchers went to work on it, cutting it into smaller pieces, they used a little handheld device to scan that first bar code and print new ones for each new cut of meat. In this case, the meat just went to the university's food service, not a grocery store.

But the same system eventually could produce a label that would go on a package of meat in the store. "Then if you have a smartphone," Buskirk says, "I can scan that two-dimensional bar code, and it will give information about the origin of that beef."

In the case of the meat that went to Michigan's food service, it showed an aerial picture of the farm. But in theory, the label could link to any information at all. It could tell consumers "what goes on at the farm, how the animals might be cared for, how they might be fed," Buskirk says.

It depends on what consumers actually want to know about the meat they buy, and what the meat producers are willing to reveal.