Accessibility links
Nordic Diet Could Be Local Alternative To Mediterranean Diet : The Salt The Mediterranean diet is one of the healthiest styles of eating in the world. But in many regions, including Denmark and Sweden, it's not easy to follow when olive oil is hard to find. Now Nordic researchers are exploring the health benefits of a Nordic diet, based on local foods like herring and bilberries. 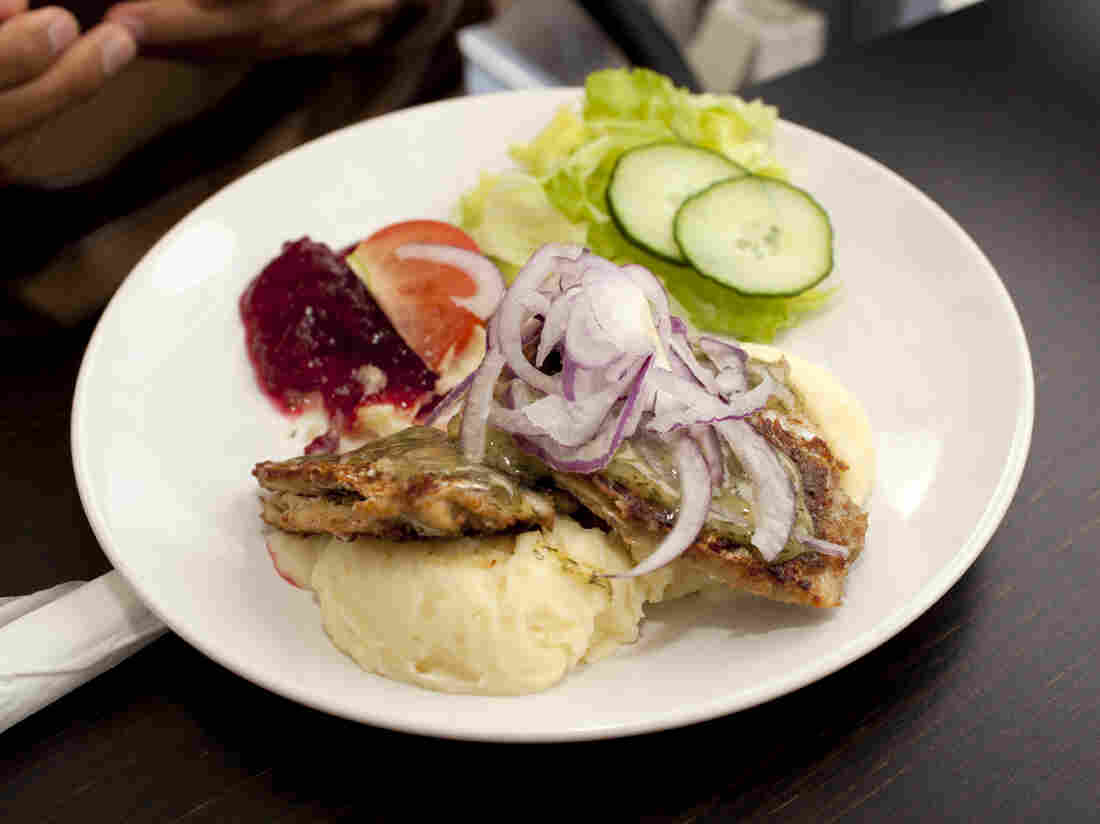 A typical Swedish meal of fried herring and lingonberries includes some of the local ingredients of the healthy Nordic diet prescribed in a new study. iStockPhoto.com hide caption 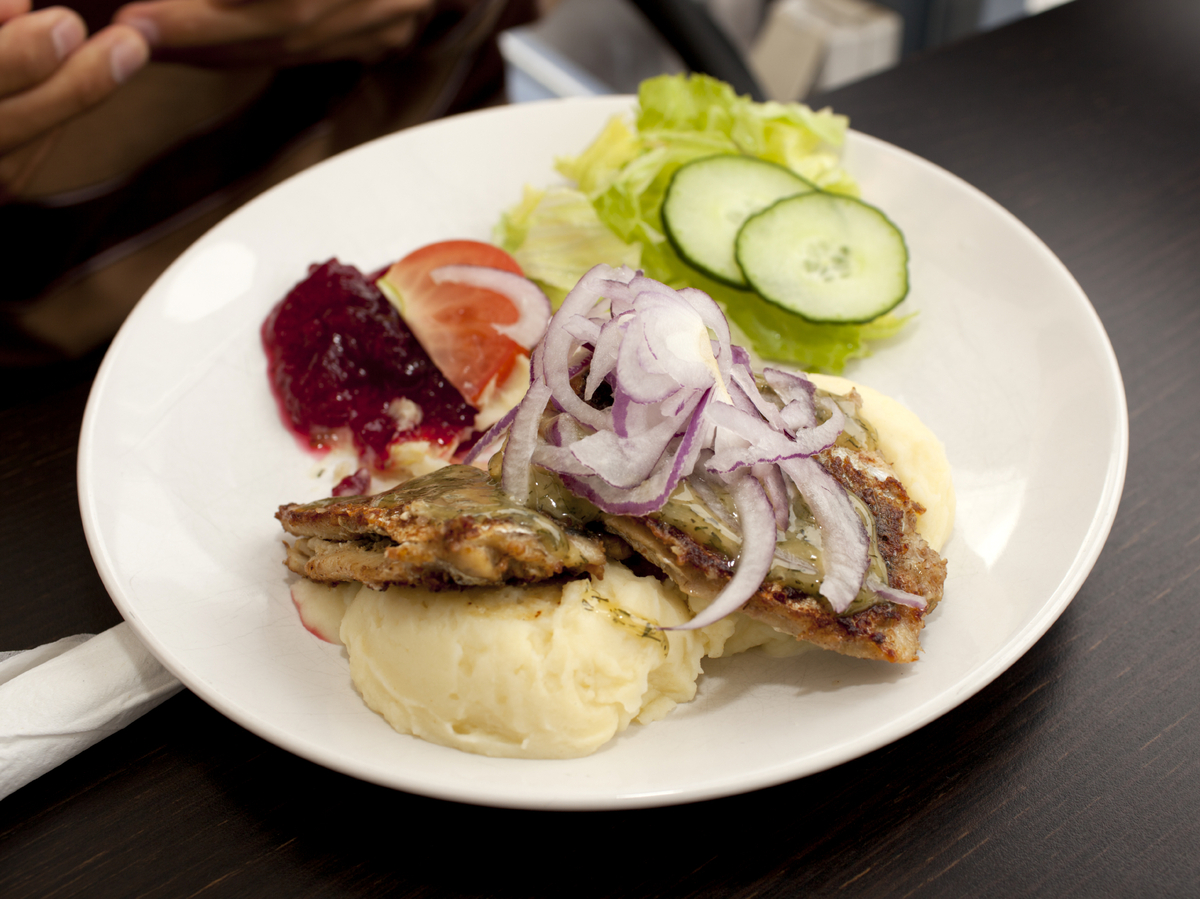 A typical Swedish meal of fried herring and lingonberries includes some of the local ingredients of the healthy Nordic diet prescribed in a new study.

The Mediterranean diet has long been a darling of nutrition experts as a proven way to prevent some chronic diseases. Heavy on olive oil, vegetables, fruit, nuts and fish, the diet most recently has been shown to reduce the risk of heart attacks, strokes and dying compared with a typical low-fat diet.

But in many regions, including Nordic countries like Denmark and Sweden, it's not easy to go Med. Olive oil, for one, is hard to find. And while obesity rates in the Nordic countries are much lower than in the U.S., there are still plenty of people at risk of diabetes and other chronic diseases who could use some dietary inspiration.

That's why a group of nutrition researchers in Iceland, Sweden, Denmark, Finland and Norway set out to design a "healthy" Nordic diet around locally produced food items, like herring, rapeseed oil (also known as canola) and bilberries (a relative of the blueberry). To test whether it was actually healthy, they prescribed the diet to people with metabolic syndrome — a precursor to diabetes — and compared them to others on an "average" Nordic diet higher in red meat and white bread.

The study was randomized and lasted 18 to 24 weeks in 2009 and 2010, with 96 people in the healthy diet group and 70 in the control group. The healthy Nordic diet group ate mostly berries (currants, bilberries and strawberries), canola oil, whole grains, root vegetables and three fish meals (preferably fatty fish like salmon and mackerel) per week, and avoided sugar. The rest of the time, they could eat vegetarian, poultry or game, but no red meat. The researchers provided them with some of the key ingredients for their meals.

The control group, on the other hand, ate butter instead of canola, fewer berries and vegetables, and had no restrictions on red meat, white bread or sugar intake.

While the researchers didn't see changes in blood pressure or insulin sensitivity in the people on the healthy Nordic diet, their bad cholesterol/good cholesterol ratio improved significantly, as did one marker for inflammation, according to Lieselotte Cloetens, a biomedical nutrition researcher at Lund University in Sweden who co-authored the study. In the long run, Cloetens says, the change in the inflammation marker could result in a 20 to 40 percent reduction in the risk of type 2 diabetes for people on the healthy diet.

The results appear this week in a European journal, the Journal of Internal Medicine.

The research coincides with a similar, but distinct movement in the region — "New Nordic" cuisine. Claus Meyer, the owner of the acclaimed Noma restaurant in Copenhagen, boldly defined New Nordic with a manifesto. His aim? To inspire chefs and highlight the culinary wealth of the Nordic region — foods like fungi, beech leaves, birch juice, reindeer, and chick weed. New Nordic has become "a mentality of sort of scientific and creative exploration," Ben Reade, head of culinary research and development at the Nordic Food Lab, told NPR freelancer Sidsel Overgaard last year.

While Meyer has collaborated with researchers at the University of Copenhagen to explore whether a New Nordic diet could help overweight people drop pounds, his diet places a special emphasis on seasonal, local foods, and on foraging. "It is more defined, from a culinary point of view," than the healthy Nordic diet in the recent study, says Cloetens.

So will the Nordic diet be competing with the Mediterranean diet in far-flung countries seeking to emulate svelte Europeans? Cloetens is confident in its healthfulness, but warns, "since it contains many local produced food items, it might not be easy to consume by people outside the Nordic countries."

And, she says, next she and her colleagues need to investigate whether the healthy Nordic diet can also help people lose weight and keep it off.