Accessibility links
Grass: It's What's For Dinner (3.5 Million Years Ago) : The Salt If you want to go paleo in your diet, invest in a lawn mower. An examination of fossilized teeth from early humans and their ancient forebears reveals our ancestors switched from an ape diet of fruits and leaves to eating grasses and sedges about 3.5 million years ago. 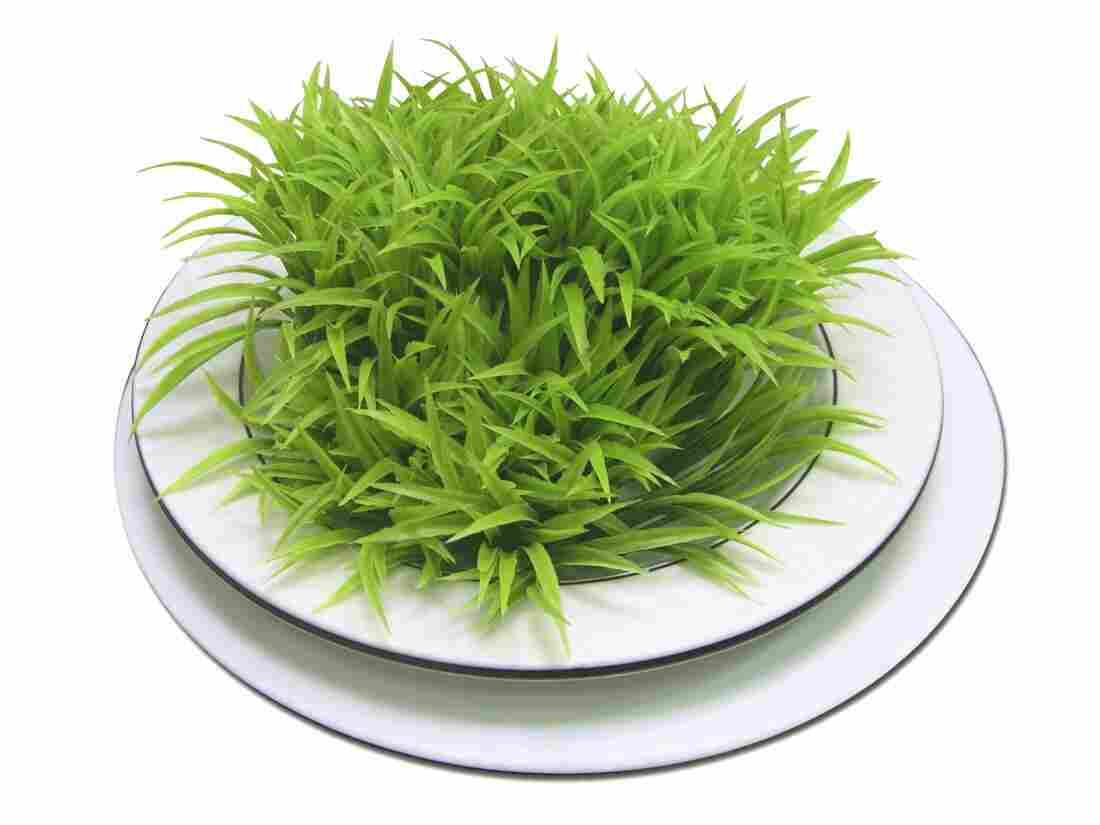 Some 3.5 million years ago, our ancestors put grass on the menu. iStockphoto.com hide caption 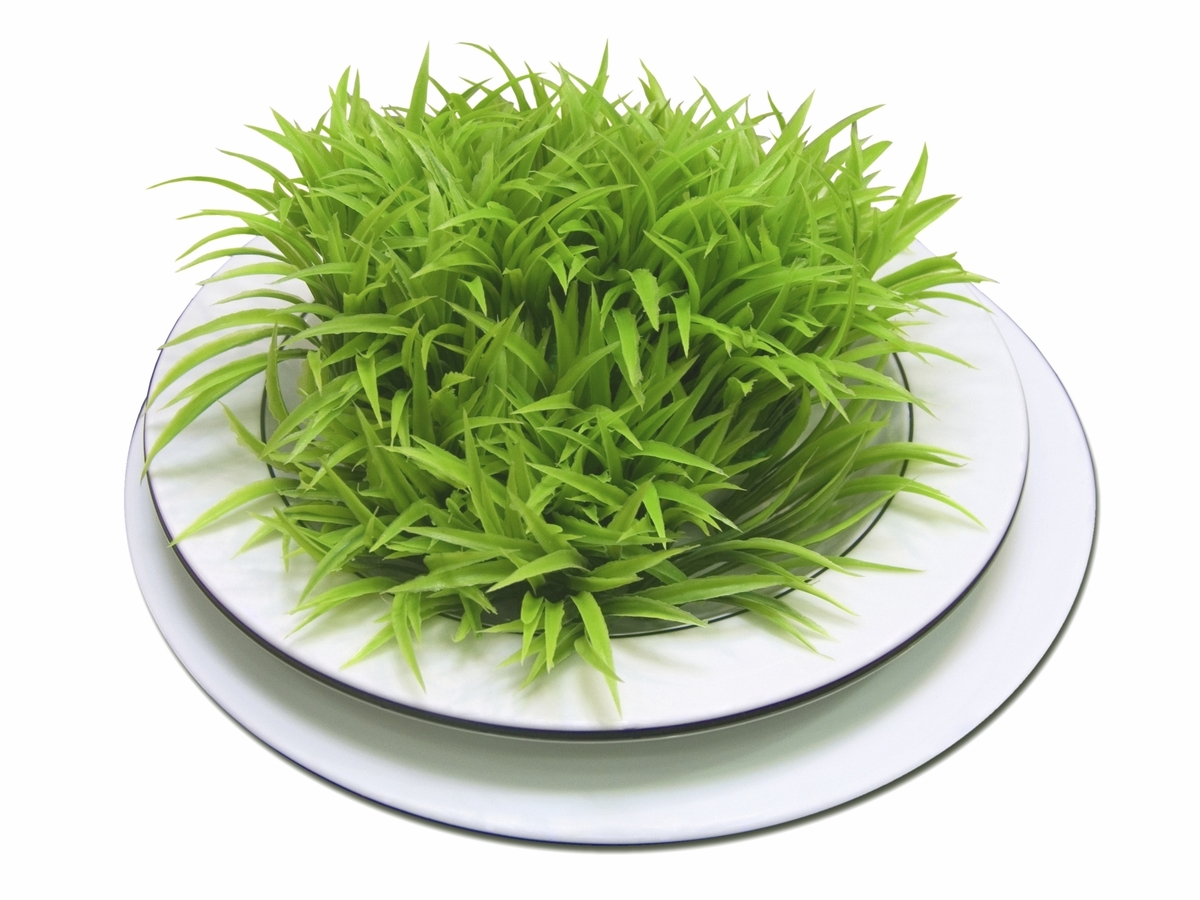 Some 3.5 million years ago, our ancestors put grass on the menu.

If you could travel back in time about 8 million years, you'd find a creature in an African tree that was the ancestor of all current apes and humans. And that creature in all likelihood would have spent a big part of its day munching leaves and fruit — pretty much what apes eat now.

Obviously, we humans took a different course, so to speak. We've refined our palates over the course of time. We started to eat meat, though exactly when is a tough call; the first evidence suggests maybe 2.5 million years ago. We figured out how to make fire and then cook food, which was a big deal, since it helped digest things our stomachs couldn't deal with easily and also kill nasty stuff that hitchhiked on our rib-eye and made us sick.

But scientists now think they've found a dietary Rubicon that human ancestors crossed long before that.

A team of researchers spent years analyzing teeth from fossils of early humans as well as their ancient forebears, such as Australopithecus, the diminutive creature that walked upright, climbed trees, and lived a sort of part-ape, part-human-like lifestyle. What the team looked at specifically were the amounts of certain isotopes of carbon that get taken up from our food and deposited in our teeth. These isotopes reveal what we and our ancestors were eating. 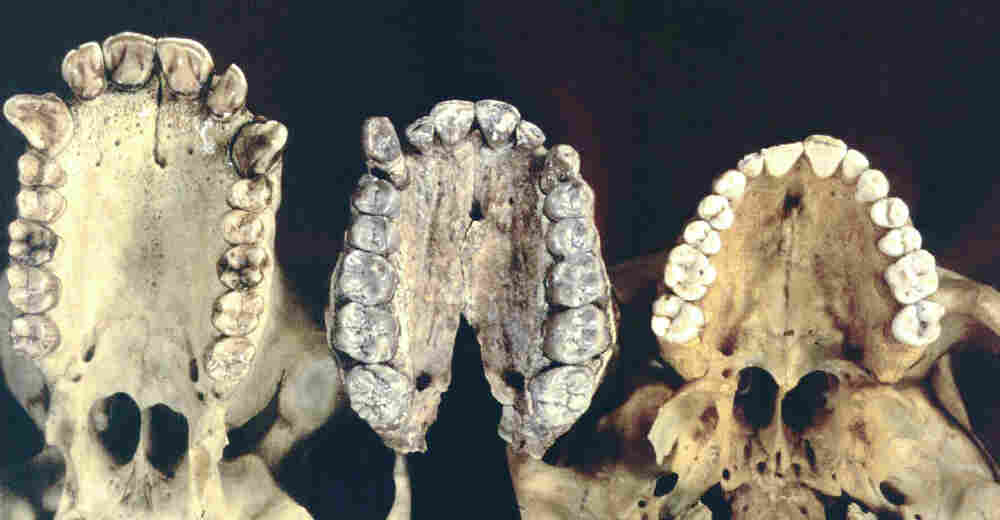 Well, not EXACTLY what we were eating. What the tale of the teeth reveals is this: About 3.5 million years ago, our ancestors started switching from the ape diet — leaves and fruit — to grasses and grass-like sedges. In the terminology, they switched from C3 plants to C4 plants.

Says geochemist Thure Cerling from the University of Utah, one of the scientists who did the work: "For a long time, primates stuck by the old restaurants — leaves and fruits — and by 3.5 million years ago, they started exploring new diet possibilities ... that grazing animals discovered a long time before, about 10 million years ago."

It was about 10 million years ago that Africa's forests started to give way to open savanna. That meant more grasses, fewer leaves. So maybe primates pretty much had to go with the flow, though it took them a few million years to order from the new menu.

Now, one thing this carbon isotope technique can't tell is whether Australopithecus just grazed like a bunch of antelope, or whether they ate the antelope that did the grazing. The carbon signal from the C4 plants gets taken up in animal (or insect) tissue and passed on to whoever eats that tissue (thus, when we eat chicken, we're pretty much eating corn).

But scientists find this interesting nonetheless. Diet can be a powerful influence over the direction human evolution took. Says Cerling: "If diet has anything to do with the evolution of larger brain size and intelligence, then we are considering a diet that is very different than that we were thinking about 15 years ago," which is to say leaves and fruit.

You can read several papers on these findings in the latest issue of the Proceedings of the National Academy of Sciences.

So, what to make of this? Well, for one, those who favor a "paleo diet" that resembles what our early ancestors lived on might consider investing in a lawn mower. After all, lawn grass is probably America's largest unharvested crop — there's plenty to go around. Why not go back to our roots?