Accessibility links
Let Them Eat Wood! (If It's Turned Into Starch) : The Salt A scientist has developed a technology to turn the cellulose in nonfood plants like trees and grasses into edible starch. Sounds zany, but guess what? Cellulose products are already commonly used as food additives in hundreds of processed and fast food items.

Let Them Eat Wood! (If It's Turned Into Starch)

Let Them Eat Wood! (If It's Turned Into Starch) 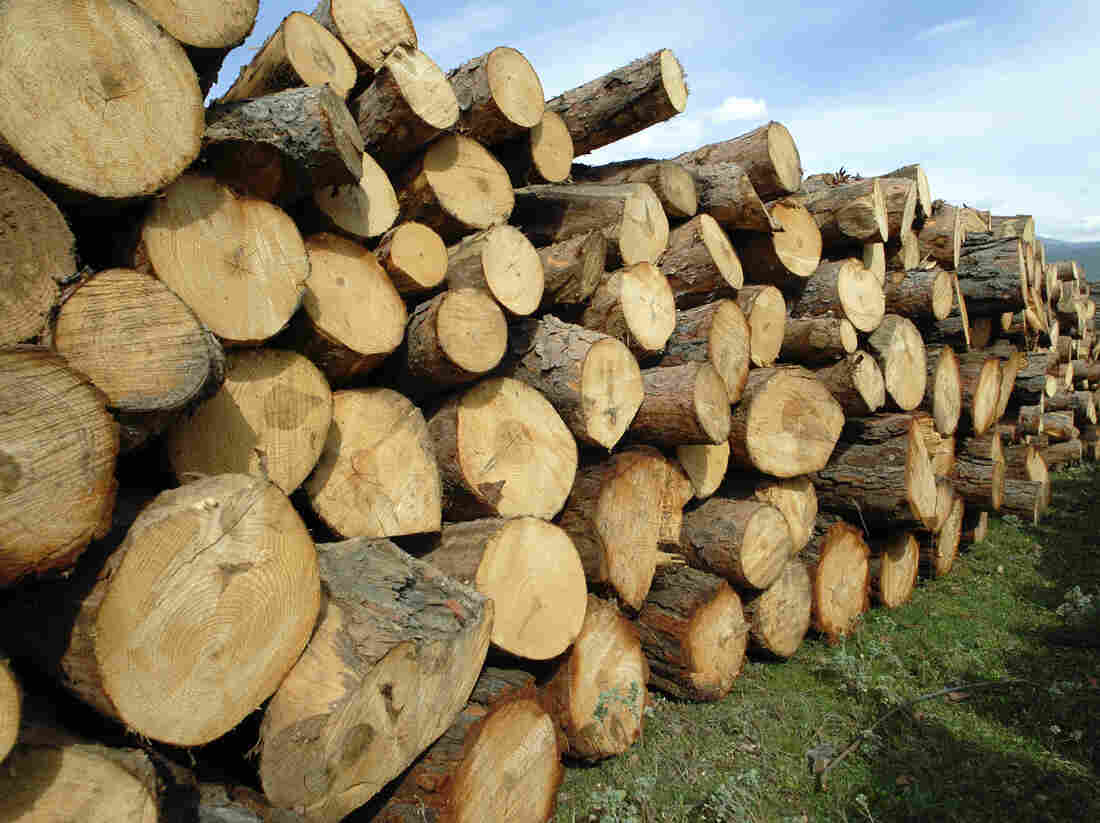 Scientists have figured out out how to turn cellulose from wood, bushes and grasses into edible starch. iStockphoto.com hide caption

Scientists have figured out out how to turn cellulose from wood, bushes and grasses into edible starch.

For Percival Zhang, growing up in China meant learning to appreciate just how critical a stable food supply is to avoiding social unrest and disasters like famine.

When he became an associate professor of biological systems engineering at Virginia Tech, he got to thinking just how risky growing food has become because of the finite resources it requires: land, water, seeds and fertilizer.

Plenty of other plants on Earth, on the other hand, aren't so demanding.

"Wood, bushes, grasses — they don't need special attention, and in nature, there's more than 100 times more of this nonfood biomass than the starch we currently grow as food," he tells The Salt.

So he got an idea: What if we could convert the cellulose in this plentiful biomass to edible starch, which makes up 50 to 60 percent of the human diet? Maybe a technology like that could feed people while reducing the environmental impact of agriculture.

In a study published this spring with colleagues in the Proceedings of the National Academy of Sciences, Zhang explains a process he developed to transform solid cellulose — which could come from wood, grass or crop residue (like corn husks) — into a carbohydrate called amylose.

The process is a form of synthetic biology and relies on enzymes to break down the cellulose into smaller units and then restitch the molecules into starch. That means the final, edible food product — a powder that Zhang says tastes sweet — is completely synthetic but resembles other complex carbohydrates like corn starch.

Zhang is far from the only one to entertain this zany-sounding idea. Even astrobiologists at NASA are interested in transforming inedible parts of plants into food. They say astronauts may want to grow plants for food on long-term missions, and it would be handy if they could utilize the cellulose in the plants.

Cellulose also contains glucose, so why not just turn wood or corn husks into sugar? Zhang says he wanted to create a healthier food product that wouldn't cause blood sugar levels to rise and fall.

"We need a slow-metabolized sugar like starch so that humans can keep blood glucose levels nearly constant," he says. That's especially important these days, given that the modern diet, high in sugar, is contributing to the risk of developing diabetes and other chronic diseases.

One company, Ingredion, which has developed all kinds of products from corn, tapioca, wheat, potatoes and other raw materials, is already turning the cellulose in the husks of genetically modified corn into edible products. But Zhang says his process is unique because he can use any kind of biomass, and he can convert it efficiently.

In the short term, he thinks his starch might be useful as a low-calorie, easily digestible coating to transform the texture of other food products. For example, Zhang says, his powder could be subbed in for bread crumbs to coat and fry chicken. But in the long term, he hopes that this kind of technology will allow humans to turn to cellulose as a food source if and when traditional agriculture is up against more severe resource limitations.

So will we be seeing starch made from wood or corn husks in the near future? Not likely — for now, the production cost is too high. Enzymes, in particular, are expensive and unstable, though Zhang says he's confident that the cost will come down.

But if this technology does eventually make it to market, it wouldn't be the first time that many of us would have eaten products derived from cellulose. Turns out, the food industry has already figured out that you don't even need to convert cellulose into starch to eat it.

Cellulose products are commonly used as an additive in processed foods to improve consistency and mouthfeel and to add bulk in products such as salad dressings and ice cream. But unlike Zhang's invention, this cellulose doesn't provide useful nutrients — it just passes through the body. Just check out this list compiled by TheStreet.com, which shows cellulose's prominence in fast food and processed food, including Wendy's Frosty milkshakes and KFC popcorn chicken.

Like fat, cellulose can also help keep food moist, making it a popular substitute for oil or butter in low-fat baked goods, according to the Mayo Clinic.