Accessibility links
Wal-Mart Pledges Fresher Produce By Cutting Out The Middleman : The Salt The retailing giant says it will launch training for 70,000 associates to help them spot fruits and vegetables that should no longer be on shelves. The move follows complaints that understaffing was leading to low-quality produce of dubious freshness in stores.

Wal-Mart Pledges Fresher Produce By Cutting Out The Middleman

Wal-Mart Pledges Fresher Produce By Cutting Out The Middleman 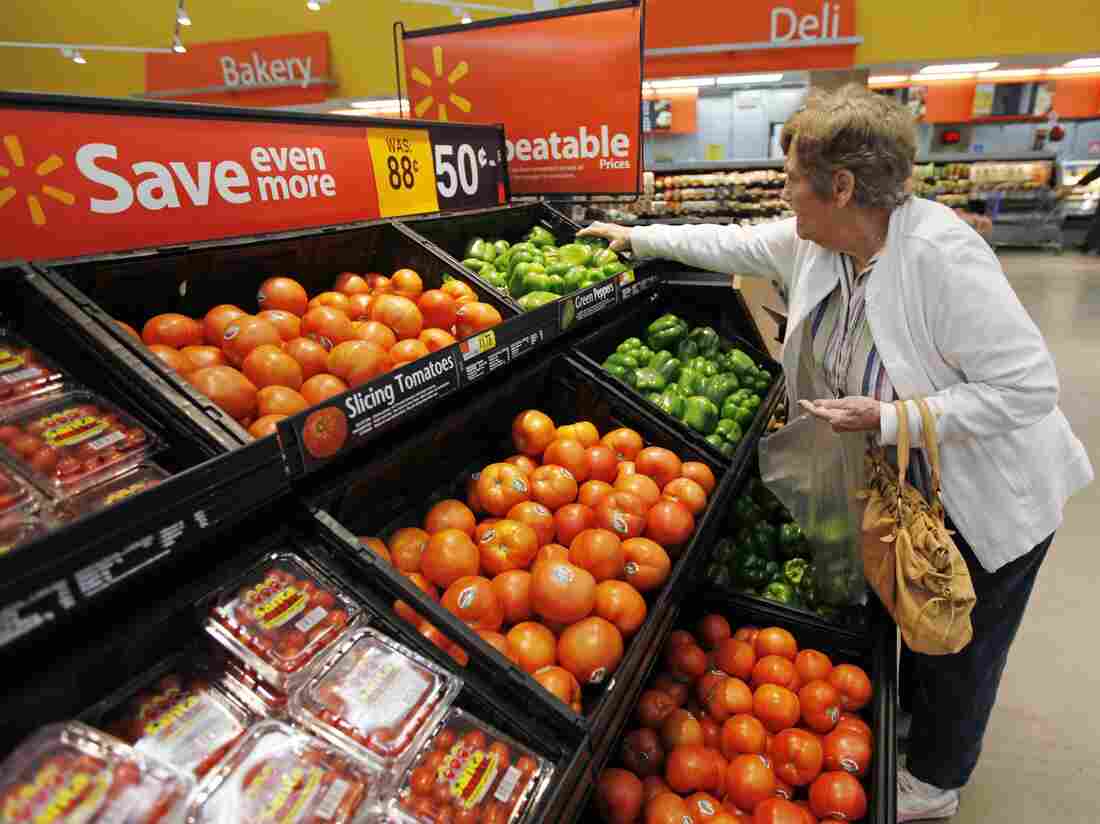 The nation's largest retailer announced Monday that it will be delivering produce from farms to stores faster by buying fruits and vegetables directly from growers.

The plan is to source about 80 percent of fresh produce directly, explained Jack Sinclair, executive vice president of the food business for Wal-Mart U.S., during a conference call that we participated in Monday morning.

In many instances, Sinclair says it will be possible to "cut out the middleman," but he added that local wholesalers will continue to "play an important role for us in the areas we serve."

The announcement comes on the heels of complaints that Wal-Mart isn't staffing its stores with enough employees to stock shelves efficiently or manage produce, resulting in complaints about the freshness of fruits and vegetables on display. As The New York Times reported in April, internal Wal-Mart memos showed the company struggling with "low customer confidence in its produce and poor quality."

To address such concerns, Sinclair says, Wal-Mart will launch Fresh Produce School training for 70,000 associates. Managers and employees will be taught, for example, to identify fruits and vegetables that should no longer be on the shelves — and in general, they'll learn more about handling of produce.

And if Wal-Mart shoppers aren't happy with the quality of a peach or pear, the retailing giant is reinforcing its commitment to a 100 percent money-back guarantee.

Sinclair says there's no need to return the food item: Just bring in a receipt, and the store will refund shoppers for the full amount, "no questions asked."

Sinclair said Wal-Mart is on target to meet its commitment to increase the amount of local produce found in retail stores by the year 2015 (a pledge made in 2010). There have been complaints, however, that some small farmers aren't benefiting from the initiative.

And with the goal of making nutritious food more affordable, Sinclair says Wal-Mart is open to new opportunities. One incentive program I wrote about in March, where health insurers nudge shoppers to buy broccoli instead of brownies by offering rebates, is an example of attempts to incentivize healthy choices.