Accessibility links
Nudging Detroit: Program Doubles Food Stamp Bucks In Grocery Stores : The Salt Incentive programs that double the value of food stamp dollars spent at farmers markets have been hailed as one of the most effective ways to encourage healthful eating and support local farmers. The flaw: Most people don't shop at farmers markets. So a new program will soon pilot the concept at three grocery stores in Detroit. 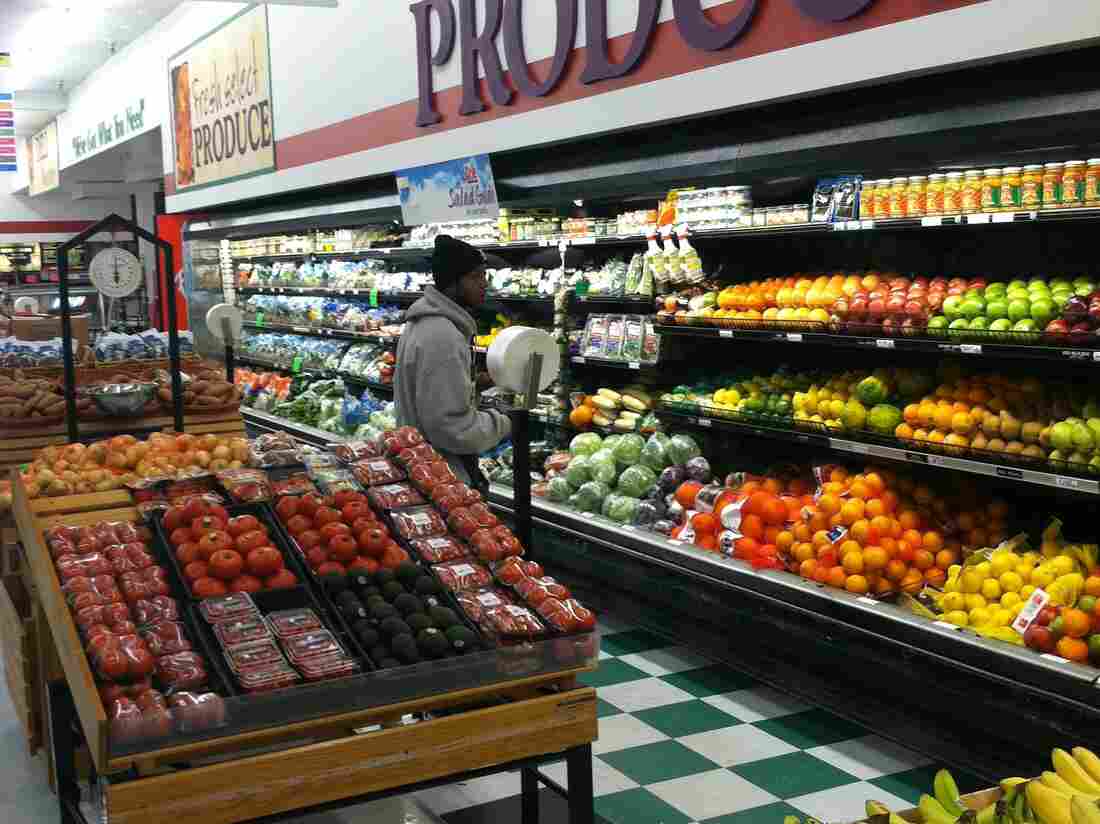 A customer in the produce section at Metro Foodland, one of the Detroit grocery stores participating in a healthy food incentive program for people with SNAP benefits. The store will add a section of specially marked local produce as part of the program. Courtesy of the Fair Food Network hide caption 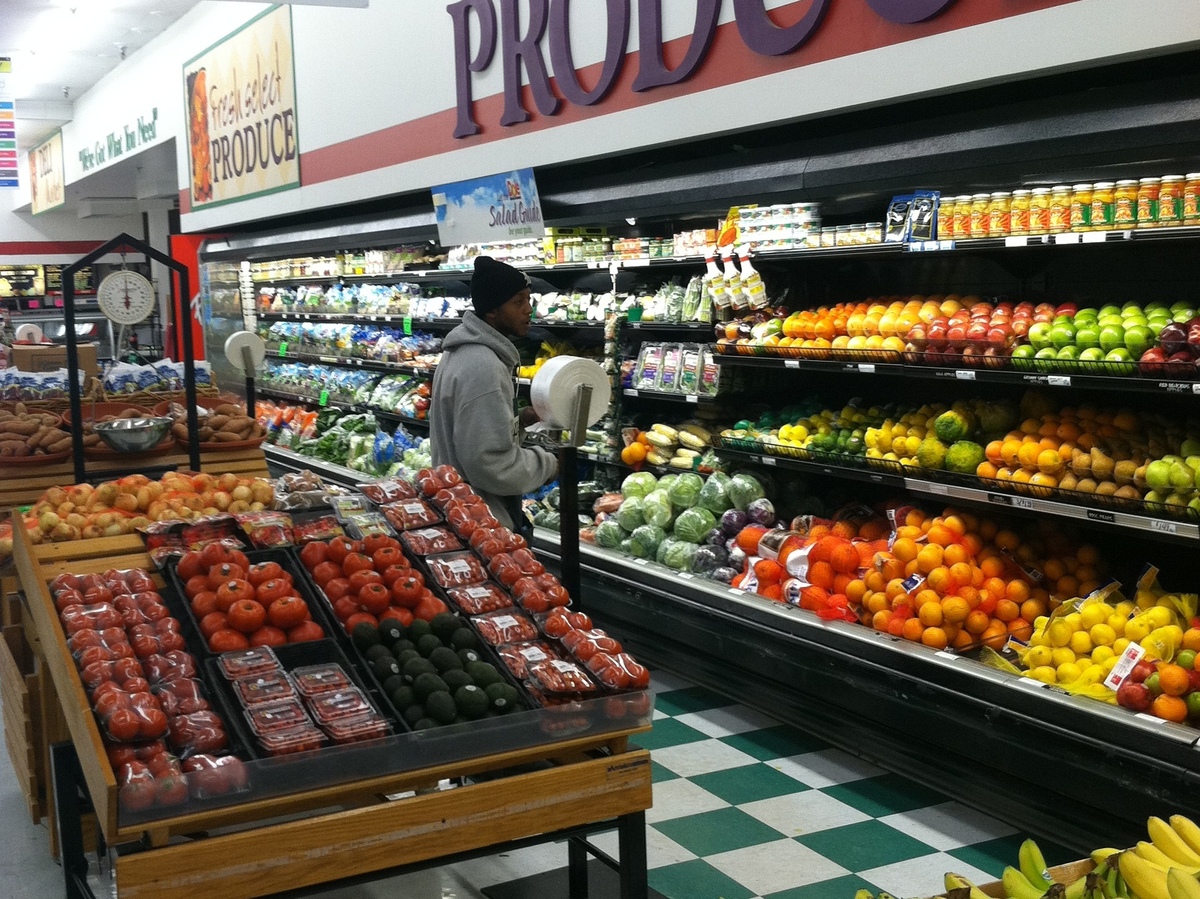 A customer in the produce section at Metro Foodland, one of the Detroit grocery stores participating in a healthy food incentive program for people with SNAP benefits. The store will add a section of specially marked local produce as part of the program.

Courtesy of the Fair Food Network

In recent years, programs that double the value of food stamp dollars spent at farmers markets have generated a lot of attention. The basic idea: Spend, say, $10 in food stamps and get an extra $10 credit for purchases at the market.

The model, which has spread to more than 25 states, has been hailed as one of the most effective ways to help low-income consumers get better access to fresh fruits and vegetables, while also supporting local farmers. But it has one major flaw: Most people don't shop at farmers markets.

That's why the Fair Food Network announced Friday that it's taking its food stamp incentive program to a new frontier: grocery stores.

The Fair Food Network already runs one such program, called Double Up Food Bucks, at 100 farmers markets in Michigan and Ohio. The program gives consumers a credit of up to $20 a day for using food stamps, or SNAP benefits, at the markets.

But Fair Food is well aware of the shortcomings of this approach. So the organization will soon pilot a new version of its program — the first of its kind — at three independent grocery stores in Detroit. This time, shoppers who use food stamps will get a $10 reward card for local produce with the purchase of $10 of groceries.

According to Oran Hesterman, president and CEO of the Fair Food Network, involving grocery stores in healthy food incentive programs is a critical step in reaching even more people who rely on federal food assistance.

"Ever since we started the program in 2009, we never conceived of it as just a farmers market program," Hesterman tells The Salt. "We knew that while farmers markets were a great place to demonstrate that people would use the program, if we were going to have an impact on a big scale, at some point we would have to move from farmers markets to grocery stores, where most people get their food most of the time."

So why Detroit? It's notorious for its food deserts, and fruits and vegetables are especially expensive for its poorest residents. But, Hesterman says, the city has a billion-dollar food economy, and half of that is spent by people on food assistance, "so it's the perfect place for us" to test the idea. (The Fair Food Network is based in Ann Arbor, Mich.)

One in 7 Americans receives food stamps, known as Supplemental Nutrition Assistance, or SNAP, benefits. The average recipient receives about $133 a month. As one of the biggest government assistance programs at $80 billion, SNAP has been highly successful at reducing food insecurity and poverty in the U.S. Still, there's long been a debate about which foods should be allowed in the program and how to encourage healthful choices.

That's one reason why Fair Food Network and Wholesome Wave, another organization offering SNAP incentive programs, decided to partner with farmers markets. (Check out our Q&A with Wholesome Wave CEO Michel Nischan for more on their work.)

But Osterman says the programs are not just about encouraging people to buy fresh fruits and vegetables; they're also about building a market that local farmers can depend on.

"The more we can capture those SNAP dollars in the community, the more wealth and jobs we can generate," says Hesterman. "We're trying to demonstrate that we can think about using SNAP not just as a hunger and food insecurity program for low-income families, but also as an economic development tool."

In the new grocery pilot program, he says SNAP recipients will have about 15 Michigan-grown fruits and vegetables to choose from at the three participating stores. This local produce will be in a special section of the stores, labeled as eligible for the program.

Each store will have a different selection, depending on the season, but Hesterman says he expects most will be offering tomatoes, eggplants, squash and a variety of fruit.

"This year we are going to have a fabulous fruit crop in Michigan," he says. "So these stores will likely have apples, peaches, cherries and blueberries galore."

The participating stores are Honey Bee Market, Metro Foodland and Mike's Fresh Market; the pilot will run between July 1 and Oct. 31.

Despite the success of the incentive program at farmers markets, there's some uncertainty about whether it will work in grocery stores. The program isn't yet integrated in the grocery stores' computer systems, which is why the recipients will get their credit for produce purchases on a separate card.

"My biggest fear is that people won't know about it," says Hesterman. To get the word out, his group will be advertising the program on the radio and through billboards.