Accessibility links
New Blood Sparks Identity Crisis For Fraternal Group Of Farmers : The Salt A fraternal agriculture organization known as the Grange must bring in younger members to survive. But the new generation's interest in environmental issues and food politics is clashing with the Grange's support of industrial farms. 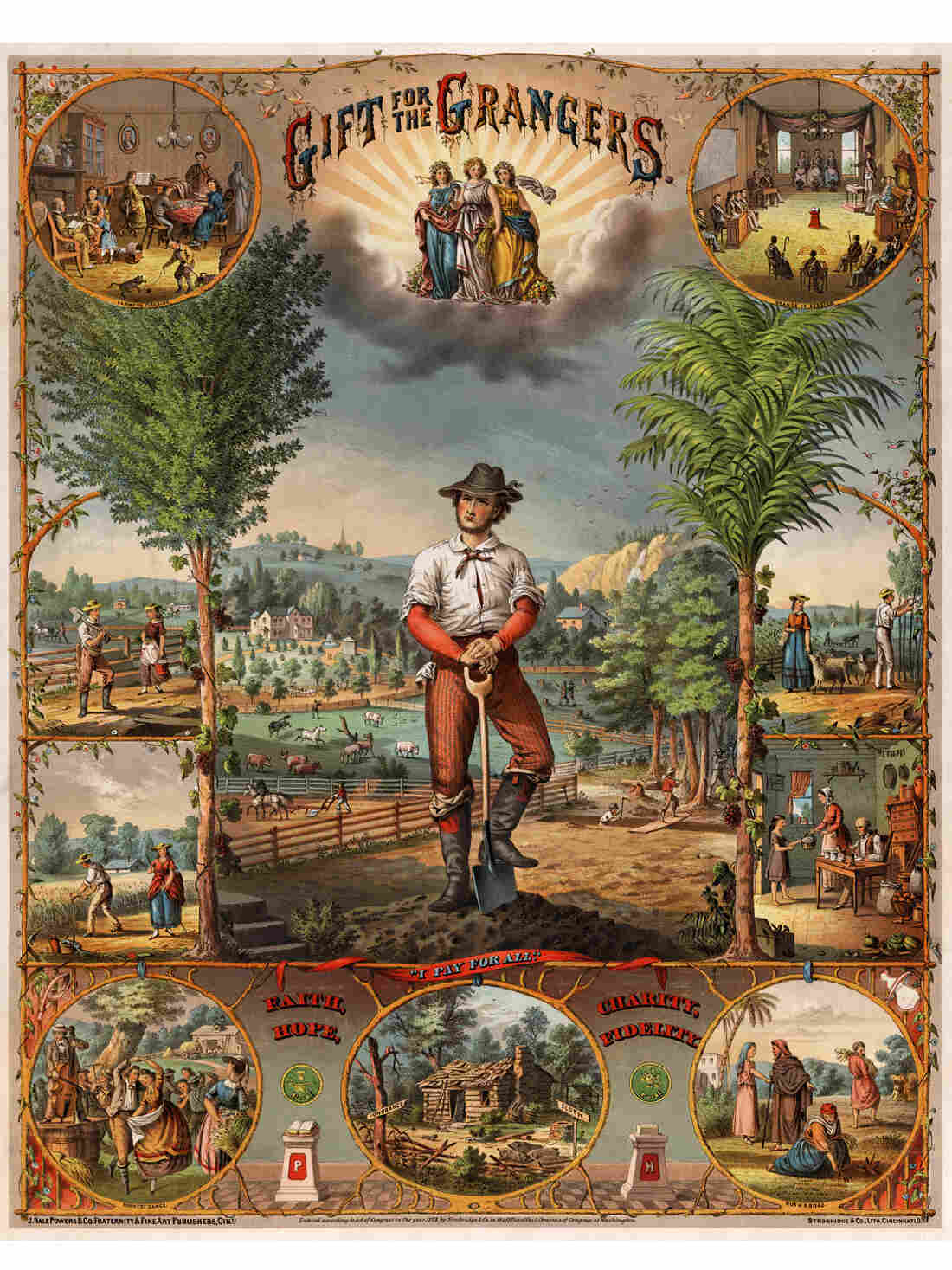 "A Gift for the Grangers" was a recruitment poster for the National Grange printed in 1873. Grange membership around this period was estimated by some to be as high as 2 million. Today it's less than 200,000. National Grange of the Order of Patrons of Husbandry hide caption

toggle caption
National Grange of the Order of Patrons of Husbandry 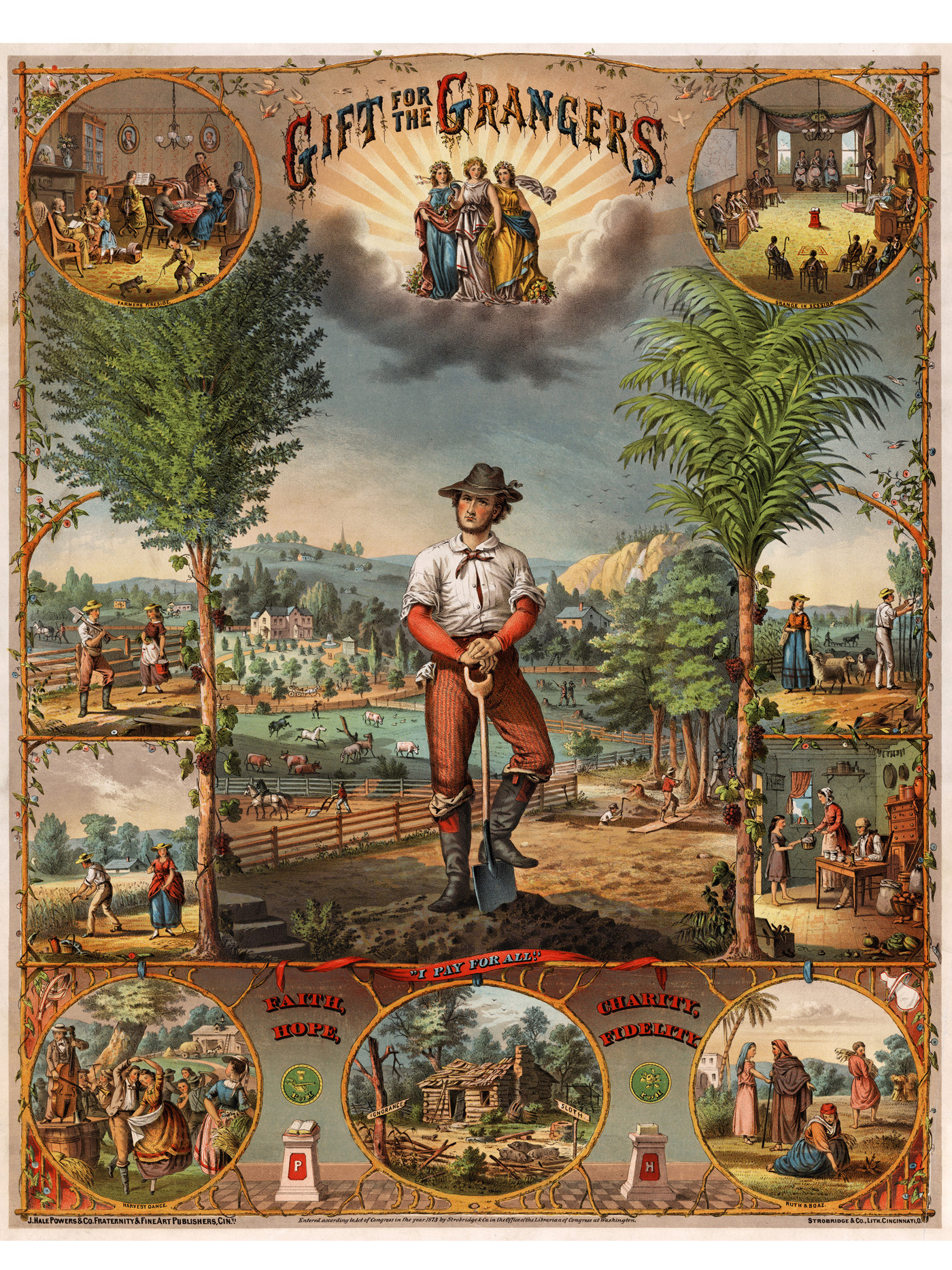 "A Gift for the Grangers" was a recruitment poster for the National Grange printed in 1873. Grange membership around this period was estimated by some to be as high as 2 million. Today it's less than 200,000.

National Grange of the Order of Patrons of Husbandry

Lots of passionate people are taking up farming these days, motivated by frustration with industrial farming, concerns about the environment, and a desire to build community and local food markets. Some of these new farmers have joined the Grange, a long-established fraternal organization for farmers with roots in social activism.

In Oregon, Granges dominated by this new generation have banded together in a coalition dubbed "Green Granges," which work together to advance the issues they care about.

You would think that would be good news for the Grange, a group whose membership peaked in the 1870s at 2 million and has been struggling to draw new blood in recent years. But these "Green Grangers" are creating an identity crisis for the organization, which has long been made up of older, more conservative farmers.

The changes being wrought are evident about 90 miles south of Portland, Ore., at the Marys River Grange — one of approximately 2,100 local Granges across the country, and one of five Green Granges. The Marys River chapter was established in 1933 (the street outside is called "Grange Hall Road") but it nearly shut down in 2009. Like many Granges across the U.S., its membership was dying off.

"It had been voted by the few remaining older members to close this Grange," says Jay Sexton, who now holds the post of "lecturer" at the Marys River Grange. Then word spread and new people showed up — with new ideas.

Sexton was among those new people. He says he was "thinking about having the Grange be an advocate for local farms; healthy, clean food; contact between producers and consumers in farmers markets."

At the May meeting and potluck, a young farmer talked about his experience raising hogs humanely and naturally. And as members loaded up their plates with food, members exchanged gardening tips. 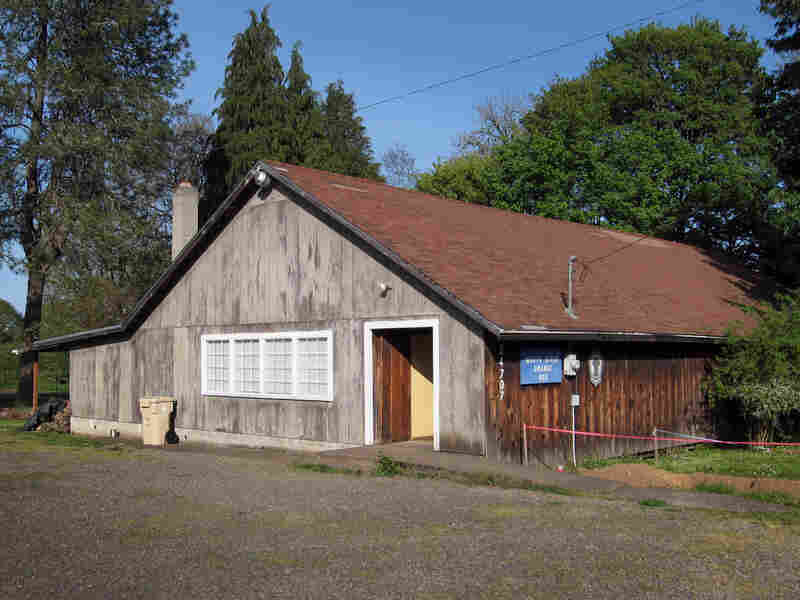 The Marys River Grange Hall near Philomath, Ore., was established in 1933. In 2009, a few remaining members were preparing to vote to shut the Grange down. But word spread and a group of new members interested in local and organic agriculture joined and have kept the hall operating. Jeff Brady/NPR hide caption 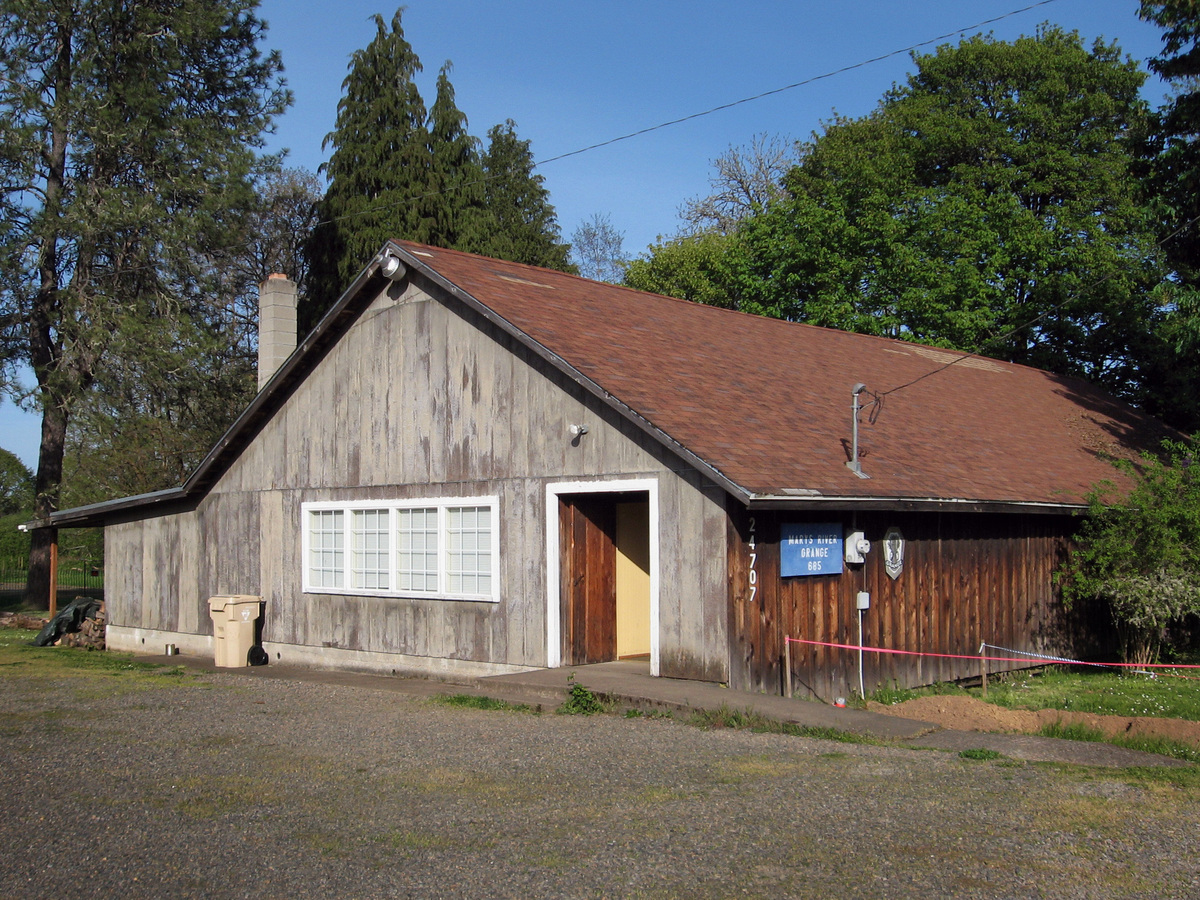 The Marys River Grange Hall near Philomath, Ore., was established in 1933. In 2009, a few remaining members were preparing to vote to shut the Grange down. But word spread and a group of new members interested in local and organic agriculture joined and have kept the hall operating.

In some ways, Green Granges like Marys River harken back to the organization's past. Over its 146-year history, the Grange has had a big role in several social movements. It successfully lobbied to regulate monopolies and supported women's suffrage. It was a major backer for rural electrification, and it still pushes Congress to improve rural infrastructure

That's fine, says national president Luttrell, but he adds that the Grange has a history of supporting all forms of agriculture — including industrial farms.

"We do have some of our Green Granges that want to be exclusive, not inclusive," he says. "And in those cases, I really feel strongly that those members need to understand our history and understand where we came from."

In California, something similar to the Green Grange movement is happening. The most visible sign was the state Grange's support for Proposition 37, which would have required labels for genetically engineered food.

At a rally last summer, California State Grange Master Bob McFarland told a crowd, "The consumers of California have a right to know what they put in their bodies, where it comes from and how it is produced."

"Sometimes, you can't choose who your new members are," says Hank Keogh, who holds the post of "overseer" at Marys River Grange. "You got to have new people, and sometimes, those new people are going to have new priorities."

But some Grange members worry about this split between new and existing members.

"I have an issue with the label 'Green' Grange," says Krist Novoselic, master at the Grange in Grays River, Wash. Novoselic co-founded the grunge rock band Nirvana and likes to joke, "I went from grunge to grange."

Novoselic hopes the Grange can work through this controversy and remain an organization for all kinds of people. "Our grange is a grange," he says. "It's not a Green Grange; it's not a liberal grange; it's not a conservative grange. It's just a grange."

The Grange has a tradition of referring to itself as a family, and some hope that will help the organization pull through this turmoil. "We call each other brothers and sister," says Oregon State Grange Master Susan Noah. "As a brother and sister you may fight, you may argue. ... But at the end of the day, you still remain friends and family."

But first, this "family" will have to work out its differences and decide what direction the Grange is headed.