Accessibility links
Italian University Spreads The 'Gelato Gospel' : The Salt Among the many culinary treats Italy has given the world is gelato, a frozen dessert with roots in ancient Mesopotamia. Gelato lovers from all over the world are flocking to a university outside Bologna, Italy, to master the art of gelato-making. Here's a free lesson: Don't call it ice cream. 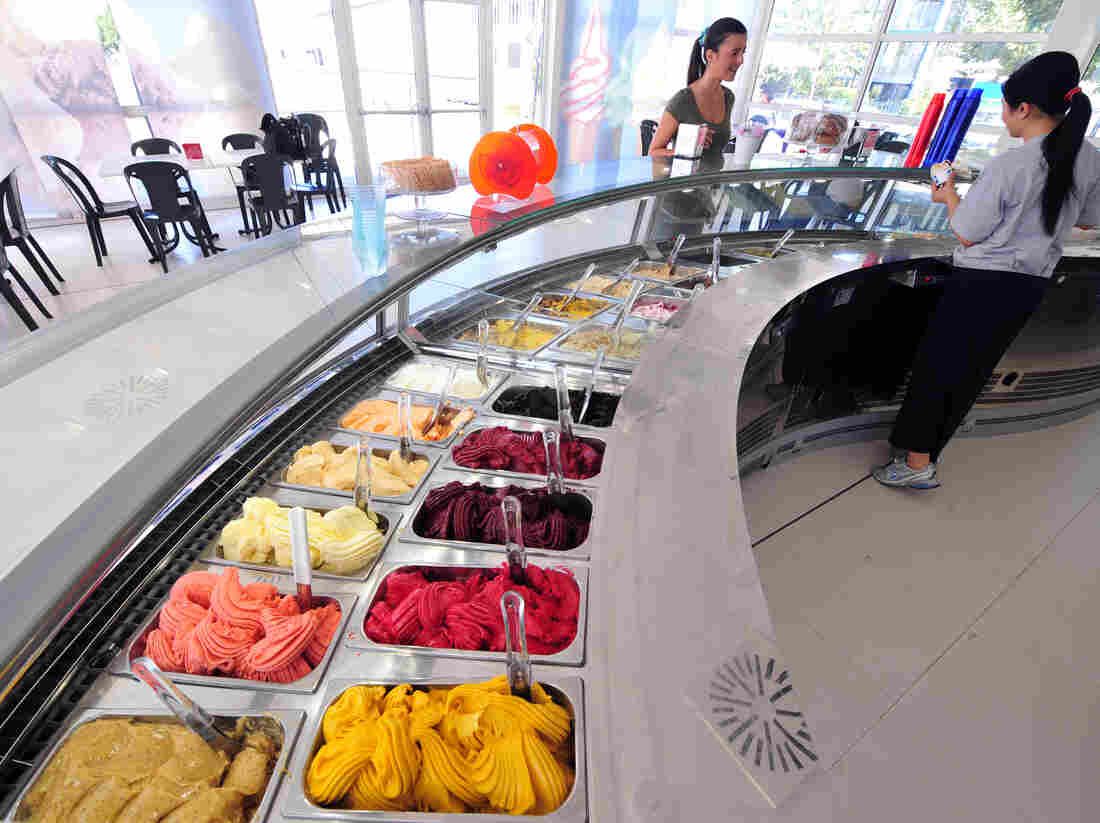 Thousands of students from around the world flock to courses near Bologna, in central Italy, at the headquarters of Carpigiani, the leading global manufacturer of gelato-making machines. Giuseppe Cacace/AFP/Getty Images hide caption 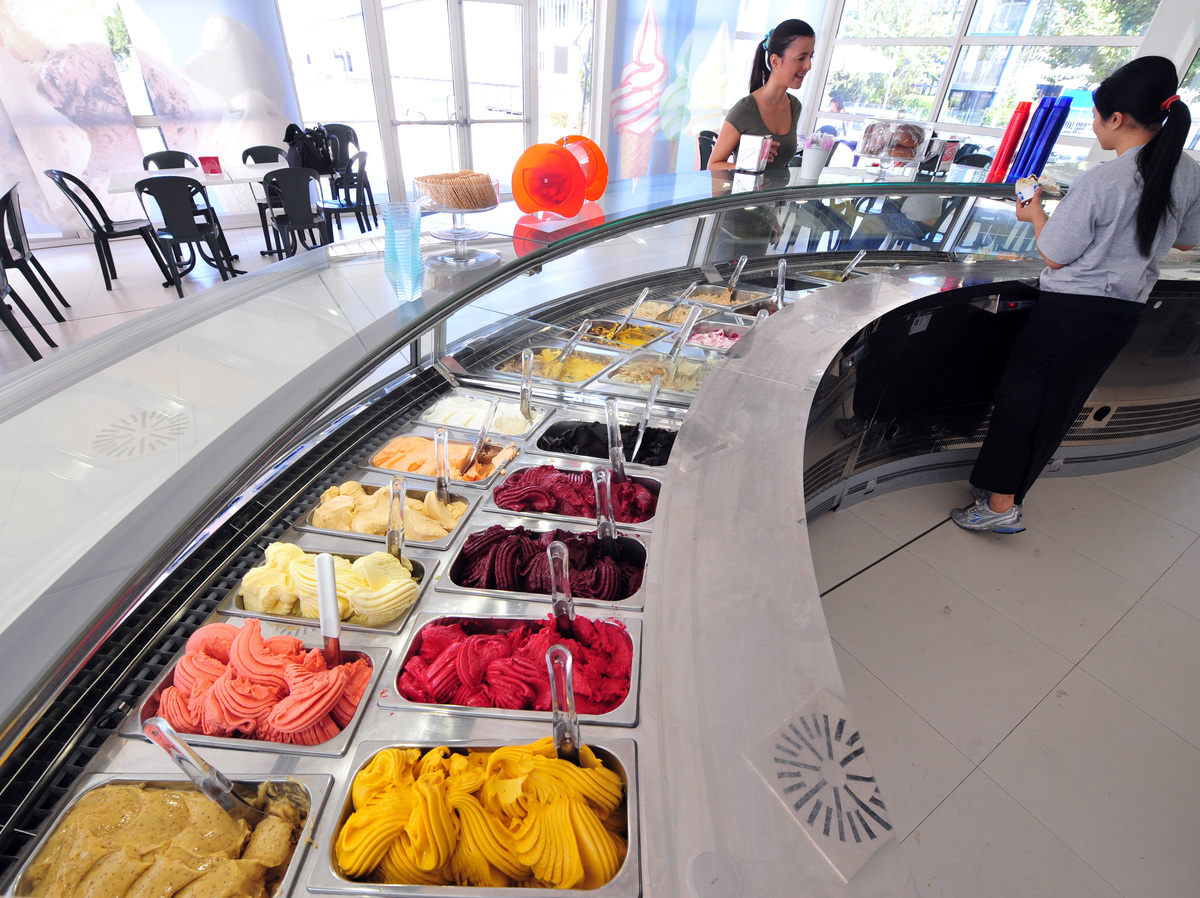 Thousands of students from around the world flock to courses near Bologna, in central Italy, at the headquarters of Carpigiani, the leading global manufacturer of gelato-making machines.

Italy has secured its place in the global diet with the likes of espresso, cappuccino, pasta and pizza.

The latest addition to the culinary lexicon is ... gelato, the Italian version of ice cream.

And despite tough economic times, gelato-making is a booming business.

At Anzola dell'Emilia, a short drive from the Italian city of Bologna, people from all over the world are lining up for courses in gelato-making.

This is the headquarters of Carpigiani, the world's biggest gelato machine. Next door are the Carpigiani Gelato University and Museum of Gelato Culture and Technology.

A guide explains that gelato has its roots in ancient Mesopotamia, where mountain snow was mixed with fruit and beer for refreshment. She then points to a medieval document, the first written recipe for shrb, the Arabic word from which sherbet derives.

Creamy gelato can be dated to 16th century Florence, where it was invented by an alchemist in the court of the powerful Medici family. Catherine de Medici introduced the delicacy in France after she married into the French royal family.

The museum wall is covered with quotes on the joys of gelato — the French philosopher Voltaire said it's so sublime, it's a wonder it's not illegal. 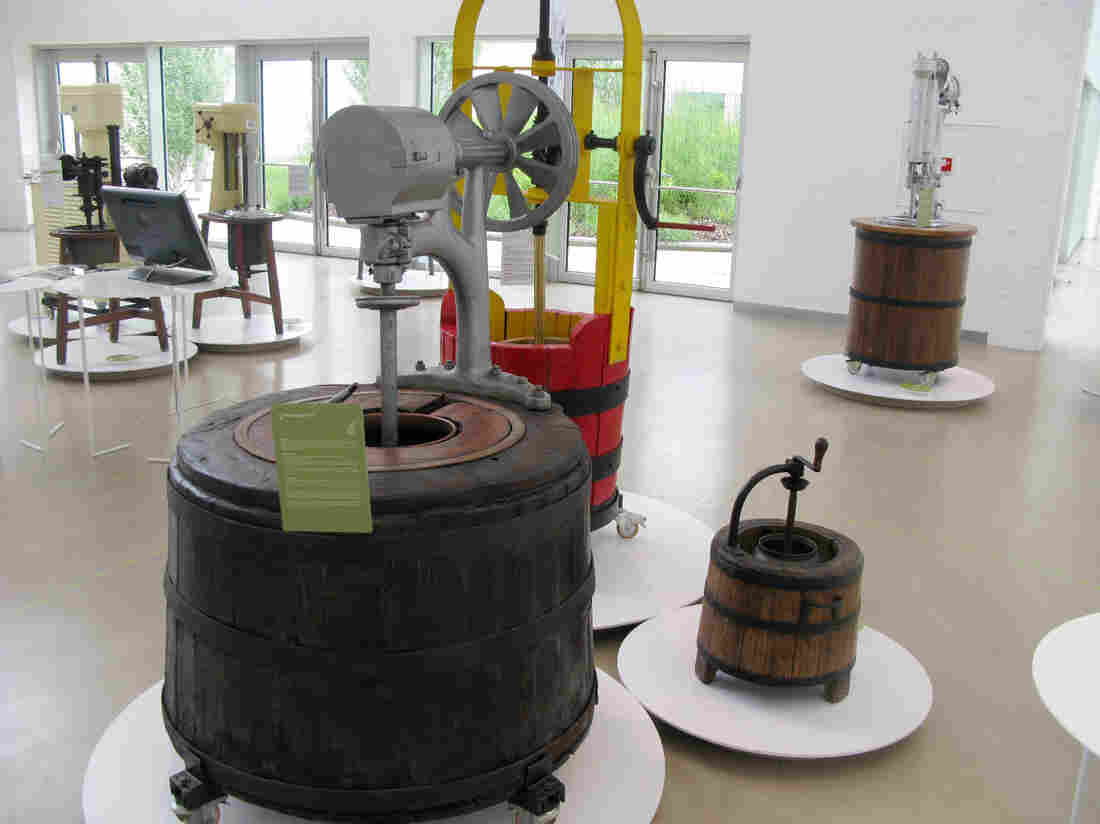 Gelato-making machines through the centuries are on display at the Carpigiani Gelato museum. Sylvia Poggioli/NPR hide caption 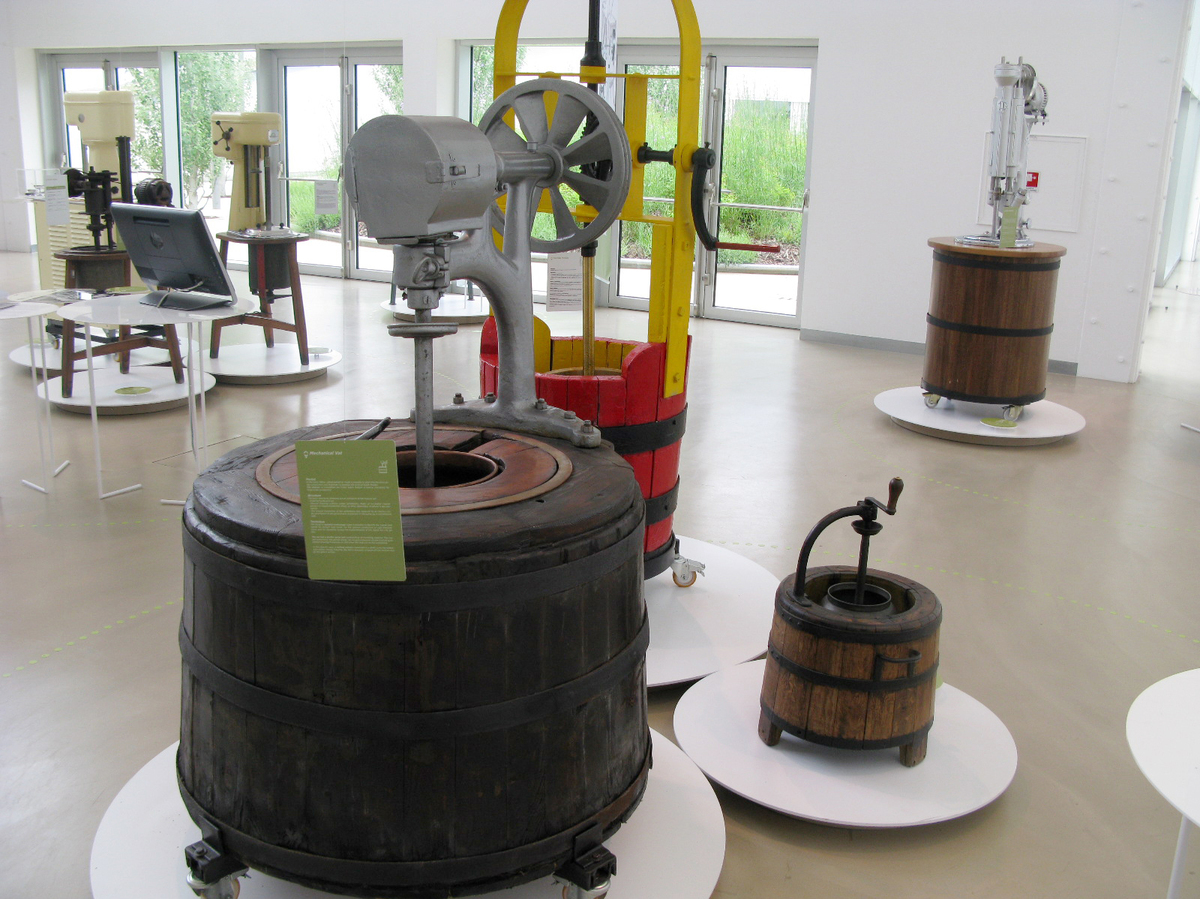 Gelato-making machines through the centuries are on display at the Carpigiani Gelato museum.

"Gelato was a symbol of ... power," says Valentina Righi, vice president of the Carpigiani Foundation. "Only rich people or aristocrats had ice cellars in their houses, in their palaces, to store the ice during the warm season."

It wasn't until the arrival of electricity in the 19th century that frozen desserts became available to all. And modern technology is making artisanal gelato-making fully democratic.

"We're going to start with four sorbets. You can make 6 kilograms total for each recipe," he tells the students. "We have, of course, to prepare also the variegato" — a gelato of one flavor striped with another — "so we're going to mix together white chocolate, hazelnut paste and pistachio bean."

The students get to work, mixing the basic gelato ingredients — milk, eggs and sugar — with a variety of nuts, fruits or chocolate. And then the machines start to hum as they blend and cool the mixtures.

At Carpigiani, the words "ice cream" are taboo. The most important difference is fat content: zero in sorbet, 8 percent in a tiramisu or chocolate gelato, compared with 20 to 30 percent fat in industrial ice cream.

Gelato has a higher density than ice cream, which is pumped with air, and serving gelato at a slightly warmer temperature than ice cream enhances its taste as it melts in your mouth. 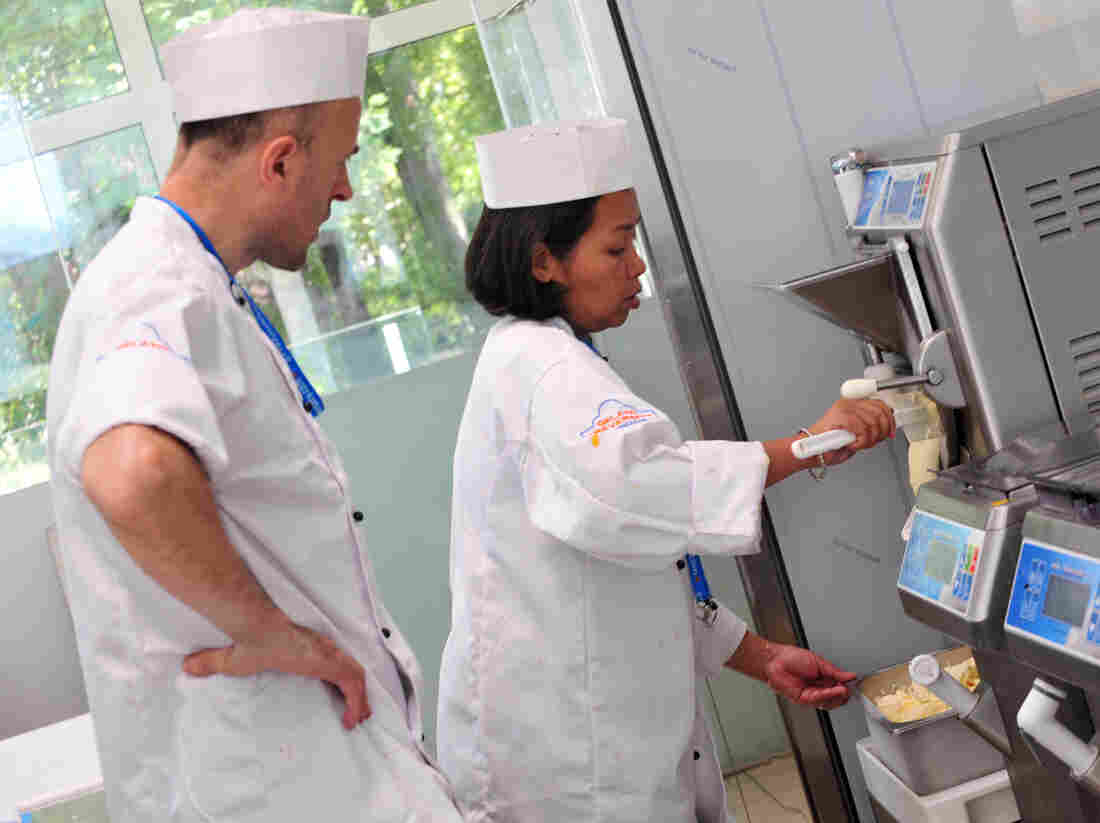 Students prepare gelato during a course at the Gelato University of Carpigiani in Bologna, Italy, in 2011. Giuseppe Cacace/AFP/Getty Images hide caption 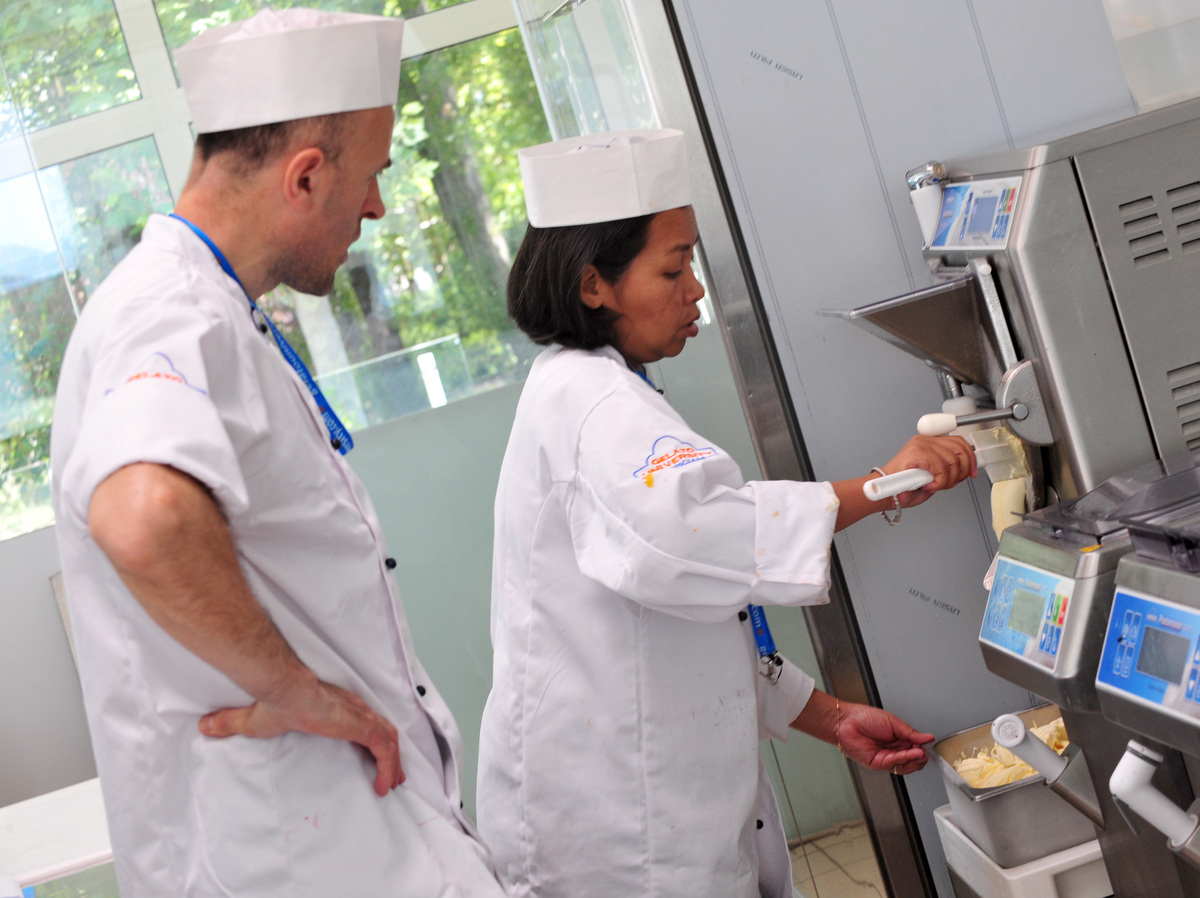 Students prepare gelato during a course at the Gelato University of Carpigiani in Bologna, Italy, in 2011.

The secret of great gelato, we're told, is using the best ingredients and making small batches, so it's always fresh.

Instructor Alice Vignoli travels all over the world giving courses and spreading the gelato gospel.

"My grandmother do gelato, my mother do gelato, and I always live for gelato," she says. "And for me, gelato is a passion, is not only a job. When I prepare gelato, I have a smile. [It] is a creative job, and you have the possibility to put your soul in your gelato."

Since the university was founded in 2003, nearly 7,000 students — more foreigners than Italians — have taken courses ranging from a week to become a gelato maker, to four weeks to earn the title of gelato master.

"To make 1 kilogram of gelato," she says, "you spend in raw materials between 2 and 3 euros every kilogram. And you sell it in Italy minimum at 15-20 euros. So you have got minimum 75 percent of profit margin."

Some students, like Haller Alziati, are victims of Europe's economic crisis. He lost his job as a manager at an Italian TV station.

"I'm taking the two-day full immersion course," he says. "I have a big family, six children, and I need to restart my life quickly."

Raynold Chan has come to improve his skills for his father's gelato shops in Hong Kong and mainland China.

"He sent me over to learn more about gelato," Chan says, "so hopefully, I can introduce the real gelato to the Chinese area."

Other students are at a midlife crossroads.

Cezar Lima, a 50-year-old engineer, and his wife, a dentist, have come from Brazil. "Me and her, we would like to do something different in the future — career change," he says, "and we would like to change our regular life, to be the owners and have the direction of our lives." 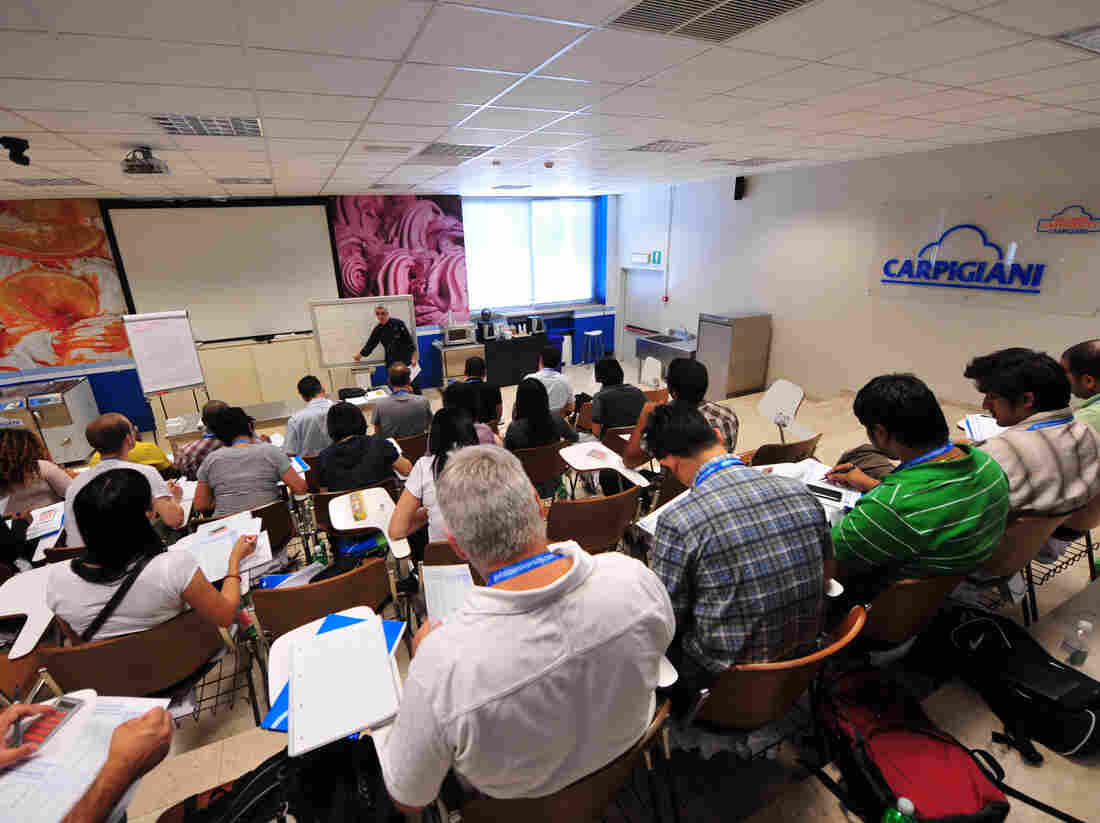 Nearly 7,000 students have taken courses at the Gelato University since it was founded in 2003. Giuseppe Cacace/AFP/Getty Images hide caption 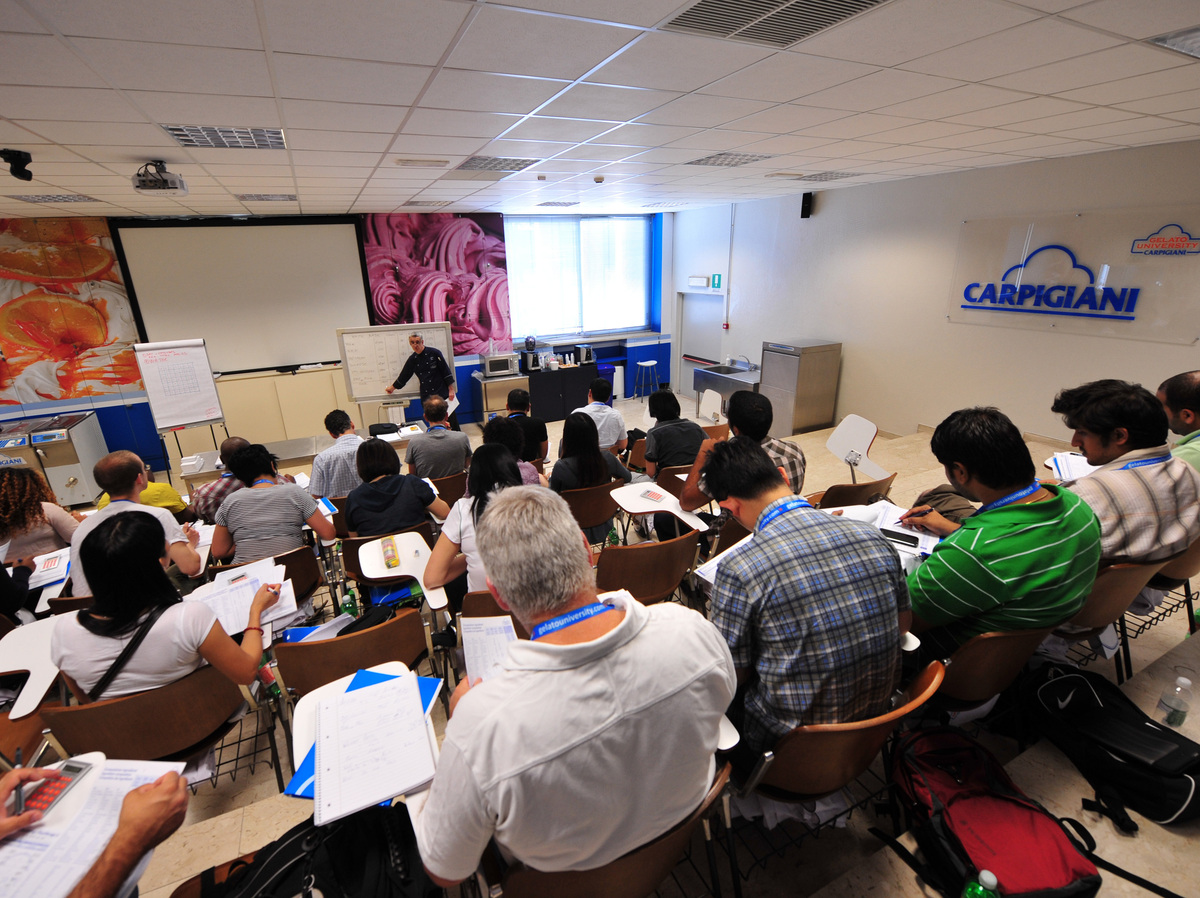 Nearly 7,000 students have taken courses at the Gelato University since it was founded in 2003.

Americans Kerri Bancke and her husband, David Rasmussen, plan to open a gelato shop in North Carolina, because they're tired of being constantly on the road working for the Department of Homeland Security. And besides, they just love gelato.

"American ice cream is very industrialized. This is more of an art than just food," says Bancke.

Rasmussen adds, "The experience we've had eating gelato here, we'd like to share that experience. Not many people get the chance to just hop on a plane and come over to Italy and try some gelato. ... And for the people who have visited Italy — they'll be able to remember that experience by coming and eating our gelato."

Alumni have opened shops all over the world, from Austin, Texas, to Jakarta, Indonesia. And Carpigiani is organizing a World Gelato Tour competition — reaching the U.S. in August and September. The winner in each world region will compete at the grand finale in September 2014 for the title of World's Best Artisan Gelato.

Before leaving the Gelato University, we taste some of the students' class work: white coffee and bacio (kiss), which combines chocolate and hazelnut — creamy and simply scrumptious.