Accessibility links
Will GMOs Help Protect Ugandan Families Against Hunger? : The Salt If your meals depended largely on the success of your family farm, would it change the way you felt about new crop technologies? Uganda is debating whether to give its first genetically modified plant, a GM banana, to millions of families for free. 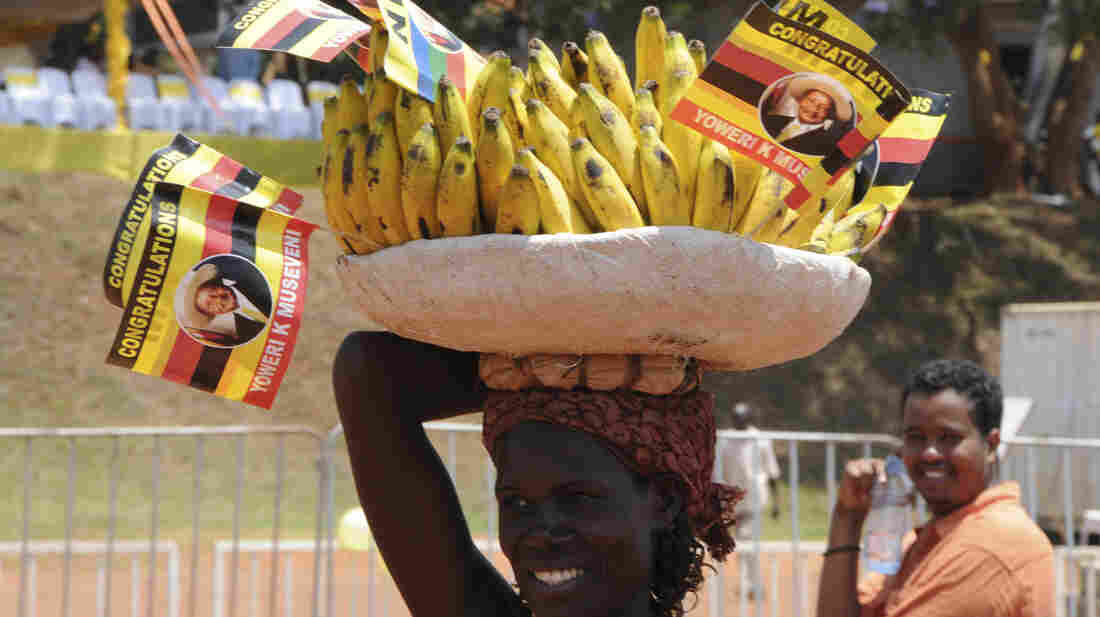 A woman sells bananas at the Kampala Airport. Ugandans eat about a pound of the fruit, on average, per day. Ronald Kabuubi/AP hide caption 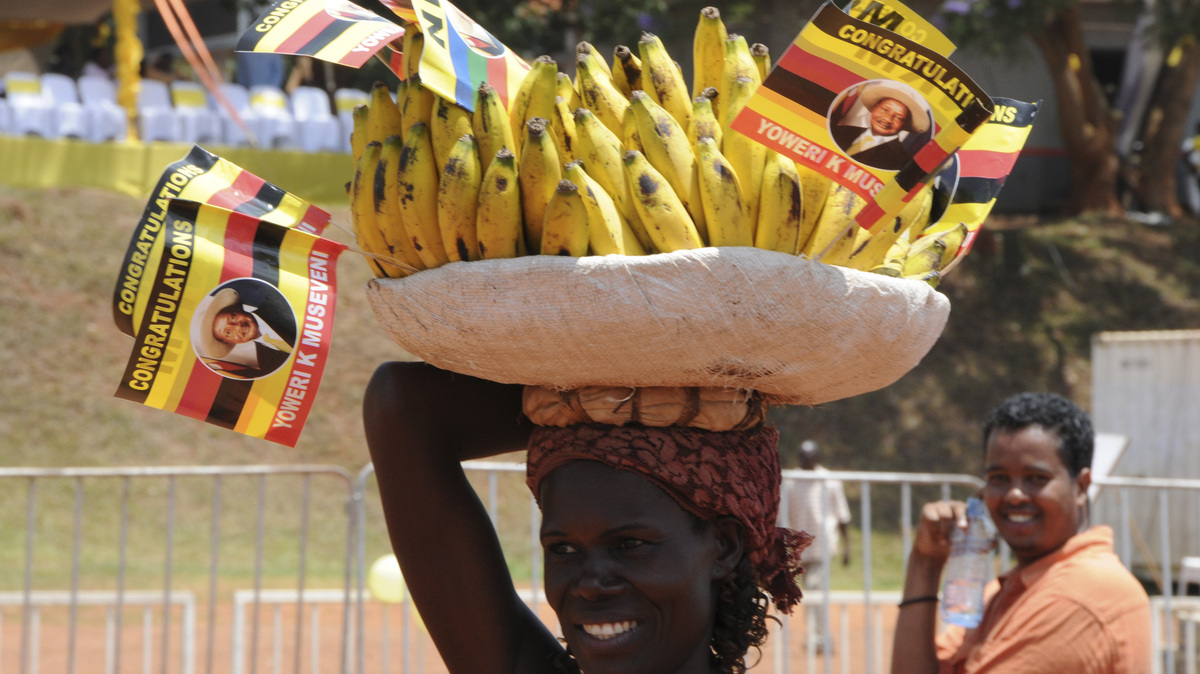 A woman sells bananas at the Kampala Airport. Ugandans eat about a pound of the fruit, on average, per day.

The question carries extra weight in countries like Uganda, where most people are farmers who depend on their own crops for food. 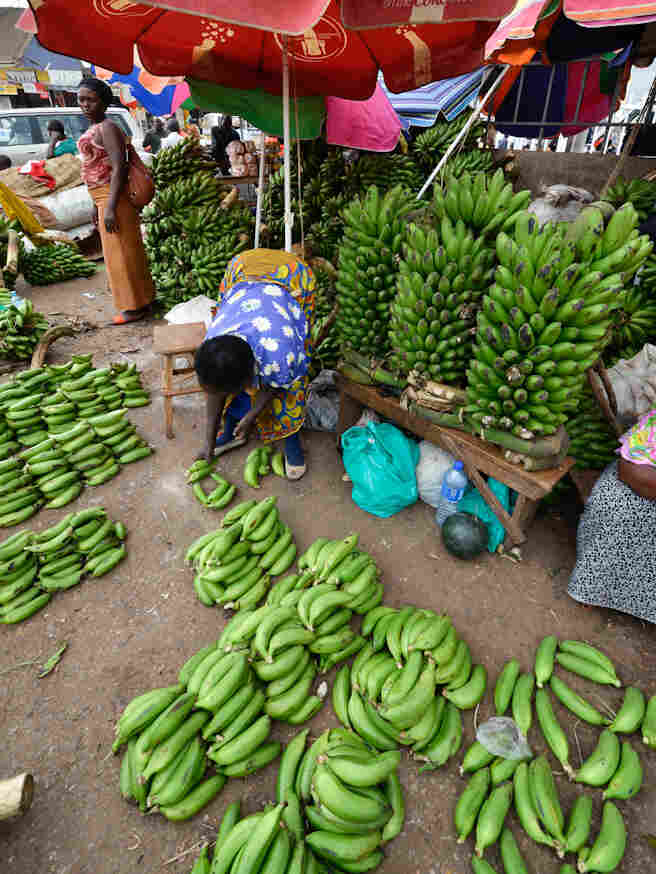 Ugandan's love bananas so much that the word for food is the same as that for the popular banana dish "matooke." Neil Palmer (CIAT)/Flickr.com hide caption 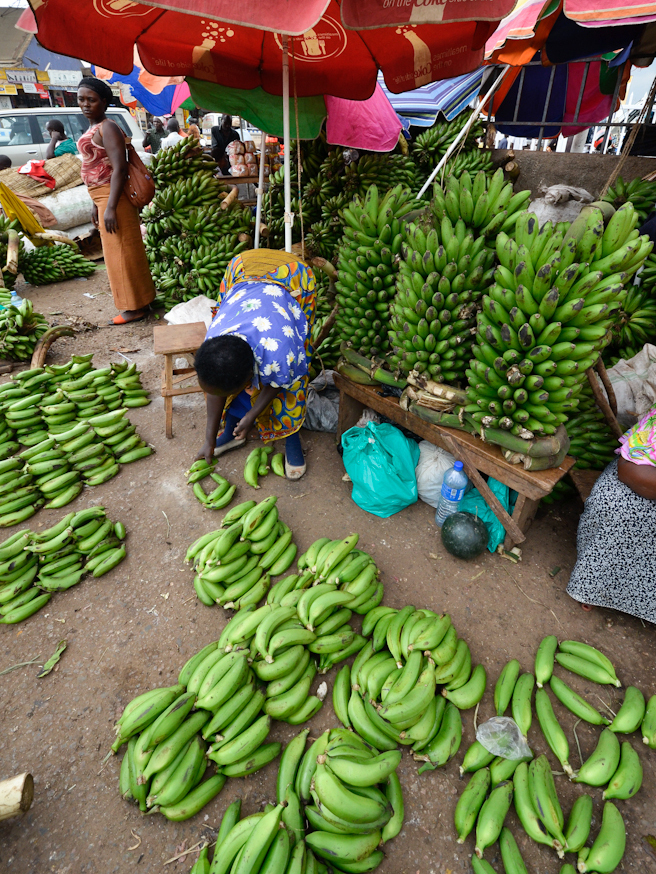 Ugandan's love bananas so much that the word for food is the same as that for the popular banana dish "matooke."

Growing GM crops to sell is currently legal in only four countries in the region: Egypt, Sudan, Burkina Faso and South Africa. But scientists, farmers and international organizations are pressuring other governments to relax restrictions on the technology. They argue that engineered crops have the potential to alleviate some of the grave threats to food production, from plant diseases to climate change.

Uganda is the latest country to consider a bill to allow GM crops, and the legislation is currently before parliament. But not everyone's behind it. Some activists are concerned with some of the same issues raised by GM critics in the U.S. Will GM crops require more pesticides that will contaminate the environment, they ask?

But there's a big difference between Uganda and the U.S. when it comes to who would actually use, and potentially benefit from, the technology.

While most Americans rely entirely on the supermarket, some 80 percent of Ugandans grow at least some of their own food, and depend on their own harvests for their livelihood. And so more people are vulnerable when the weather and pests don't cooperate.

Take, for instance, bananas. Each Ugandan eats about 1 pound of the fruit per day, on average. "Bananas are the main source of starch in Uganda ... almost every home has banana trees," he says. "They are more important than wheat."

But in the past decade, bacterial wilt disease has been cutting banana yields by 30 to 50 percent in some regions of Uganda. 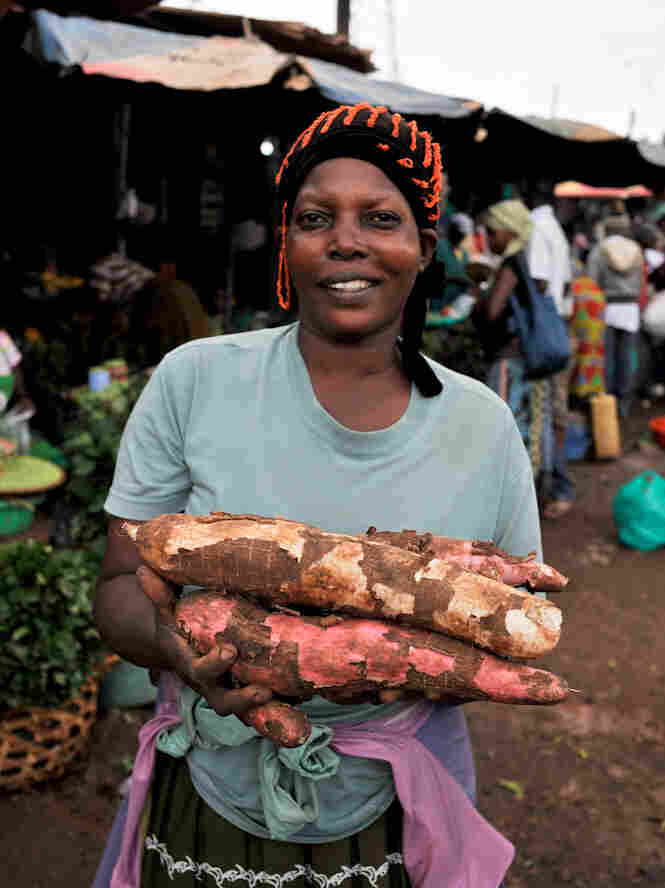 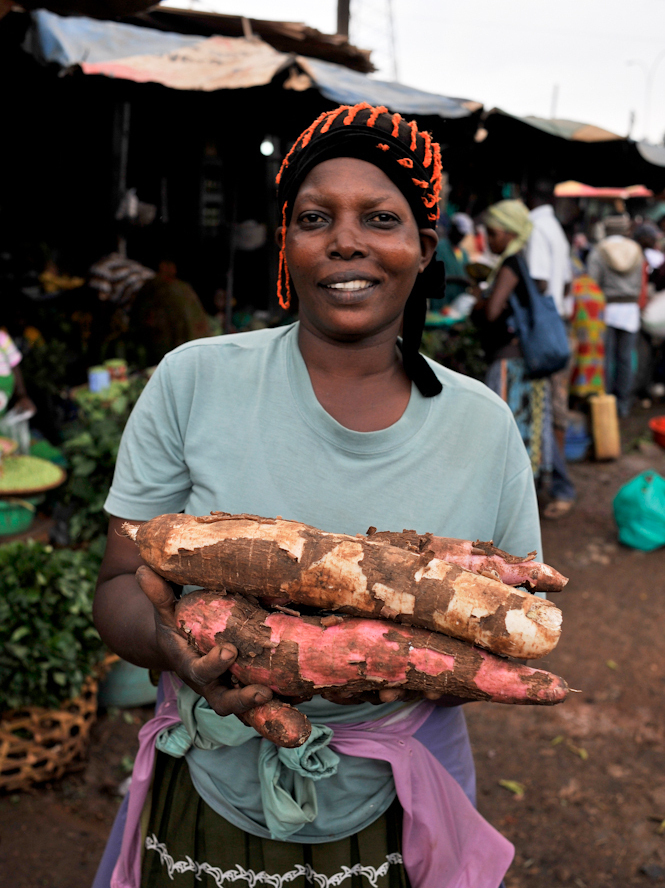 There are no pesticides or chemicals to stop the banana disease. But scientists at Uganda's National Agricultural Research Organization have engineered a bacteria-resistant version of the banana by putting a pepper gene into the plant. The scientists want to give away the GM banana for free to millions of Ugandan families.

But first, the government needs to pass the GMO law. "Without the law, the disease-resistant crop will just wither there in the lab," Juma says.

The same could happen to a transgenic virus-resistant cassava, a crop that may be more important for protecting families against famine than bananas. As PRI's The World recently reported, the starchy tuber is the go-to crop for Ugandans when the cupboard is bare. It's resistant to drought, poor soils and climate change.

Cassava and bananas can both grow from clippings. So there's little risk of private corporations controlling the seed supplies for GM cassava or banana, like they do for corn and soybeans in the U.S.

But some Ugandan activists are worried that GM cassava and bananas could open the door to a flood of GM crops, including those that require seeds.

"Farmers in Uganda are worried about the power to control the seeds," says Ellady Muyambi, an environmental scientist with the nonprofit Uganda Network on Toxic Free Malaria. "Farmers have been told that the GMOs are almost the same as non-GMOs. But they would have to go to a company to buy the seeds. Many farmers can't afford expensive seeds. They would have no rights."

Many Ugandans farm organically, without pesticides and fertilizers, Muyambi says. "But some GMOs encourage the use of extensive pesticides. These can damage other organisms, such as bees," he says, "and could affect the fish population," which is an important export for the country.

"Most of the people promoting the GMOs in Uganda have a conflict of interest," Muyambi tells The Salt. "Many foreign companies, like Monsanto, have funded the research on GMOs. They are not in a position to give an unbiased opinion on whether GMOs are good for Uganda."

There have been only a few studies so far looking at whether GMOs benefit small farmers in low-income countries. But one study in India found that introducing a GMO cotton plant increased small farmers' yields by 24 percent and their profits by 50 percent over four years.

So what do you think? If you and your neighbors had to grow most of your own food, would you want the government to hand out GMO crops?