Accessibility links
Gourmands Through The Ages: 'A History Of Food In 100 Recipes' : The Salt From ancient Egyptian bakers to Gordon Ramsay, every era has its foodies. And without them, the history of food would be pretty darn boring, says William Sitwell. His new book chronicles how these epicures shaped our palates, and the recipes they left behind.

Think our current culture has become food-obsessed? Take a look at this wall painting from ancient Egypt. 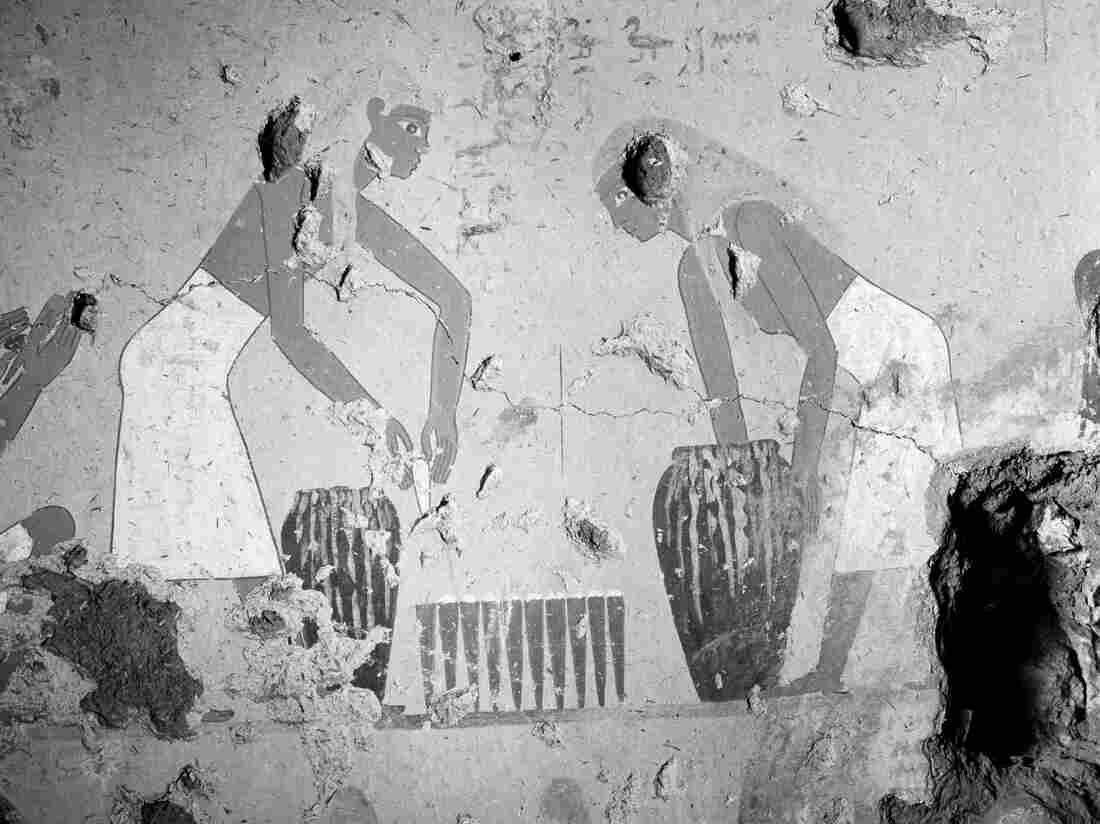 Detail from a painting found on the walls of a 4,000-year-old tomb in Luxor, Egypt, that depicts bread making. Werner Forman Archive hide caption 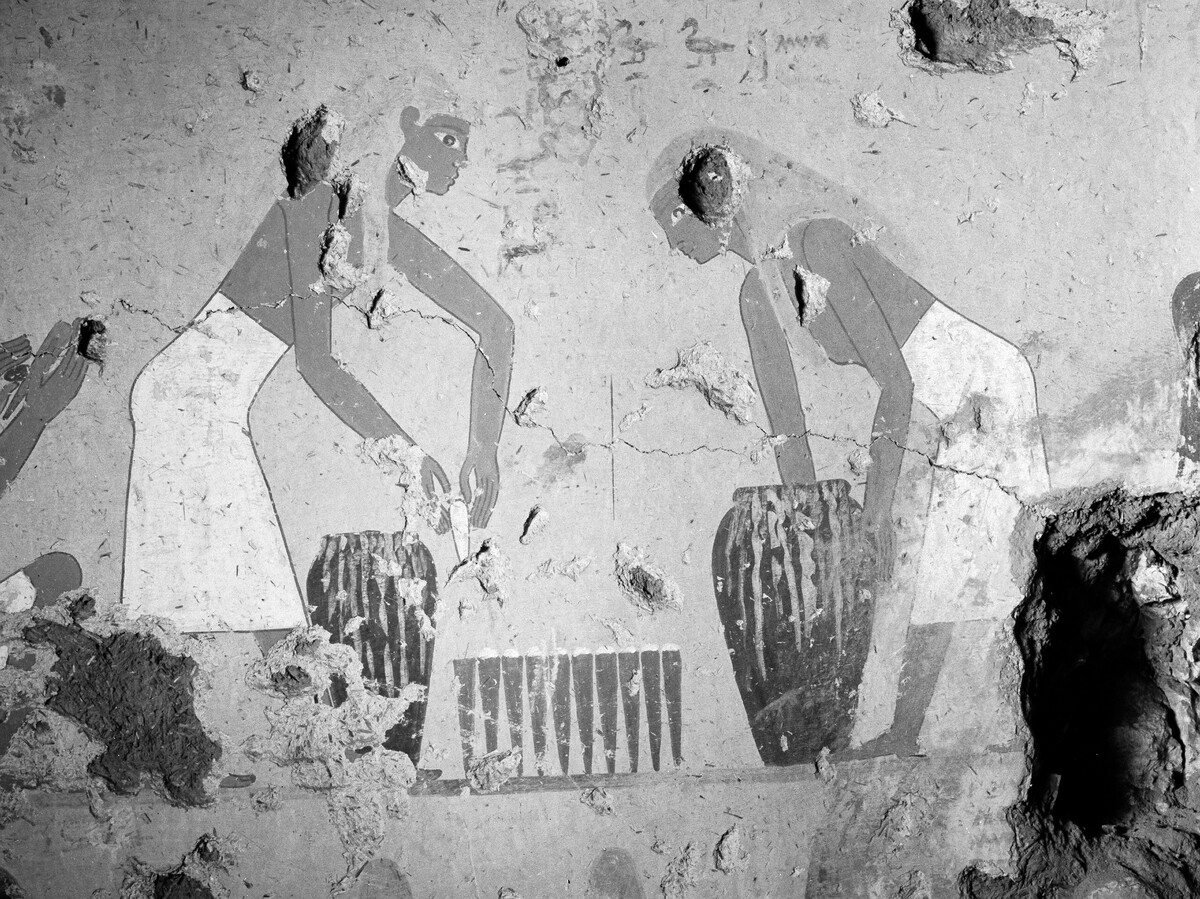 Detail from a painting found on the walls of a 4,000-year-old tomb in Luxor, Egypt, that depicts bread making.

Long before Food Network, before Michael Pollan, before pop-up restaurants, humans were taking the time to enshrine the art of cooking. The painting depicts a recipe for baking bread that was carved on the wall of an Egyptian tomb some 4,000 years ago.

It's one of the many fascinating snapshots from the history of food that journalist William Sitwell chronicles in his first book, A History of Food in 100 Recipes.

The gastronomic compass guiding Sitwell's journey through time? The recipes, in all forms, left behind by the foodies whose tastes have helped shape the sophistication of our palates.

"I wanted to pinpoint foodie references in history that to me, told a very important part of the story of food," Sitwell tells Morning Edition host Renee Montagne.

Sitwell decided to start with one of the most basic foods, bread. Which is how he ended up in Luxor, Egypt — an ancient capital for pharaohs known in antiquity by its Greek name, Thebes.

"I found myself scrambling up the dusty slopes of a hillside overlooking the Nile in Egypt, where there's this amazing tomb," he says.

That's where he found the carvings in the photo above. Ancient Egyptians filled their tombs with riches they thought would follow them into the afterlife. The fact that someone included a recipe signals just how important it was, he says.

By 1700 B.C., recipes had made the jump from walls to clay tablets — such as this one for a meat and vegetable stew, from ancient Mesopotamia. 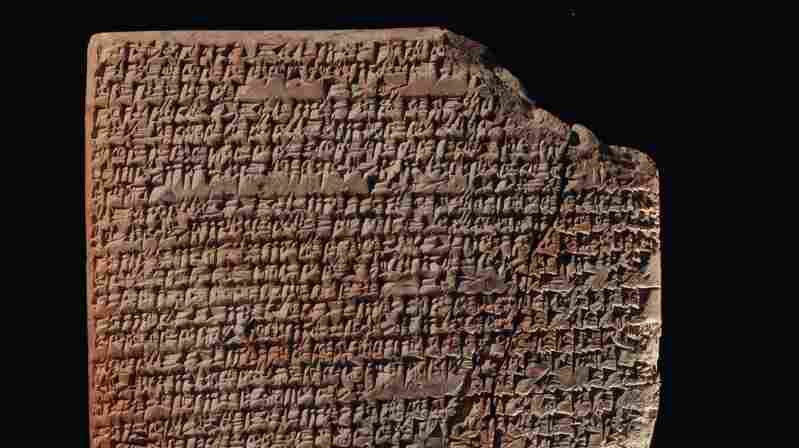 A recipe for kanasu broth carved on a clay tablet from ancient Mesopotamia, which occupied the land between the Tigris and Euphrates rivers. Yale Babylonian Collection hide caption 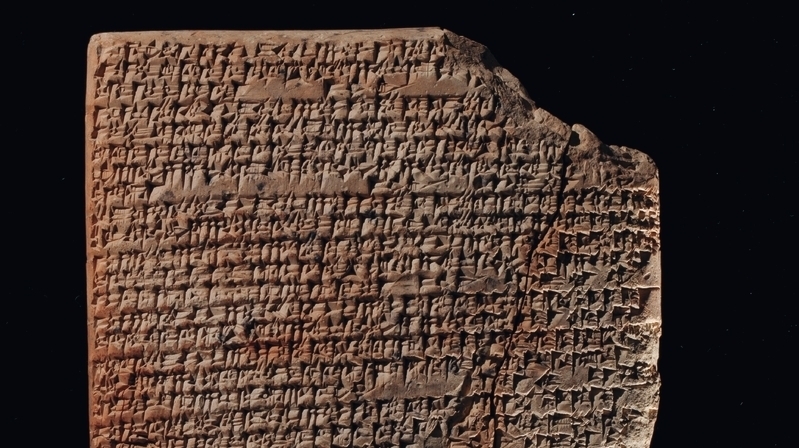 A recipe for kanasu broth carved on a clay tablet from ancient Mesopotamia, which occupied the land between the Tigris and Euphrates rivers.

Up until 2004, scholars had assumed the inscriptions on the tablet were pharmaceutical formulas, Sitwell writes. Then they took a closer look and discovered the cuneiform writings were actually gastronomical – but just as impressive. The stew, known as kanasu, required sophisticated cooking skills and a wide array of ingredients; it was so elaborate, Sitwell says, that it was likely only served in palaces or temples.

The ancient food scene that Sitwell describes was just as dramatic as the modern one. No fiery Gordon Ramsay-types yelling at green sous chefs, but the melodrama of Roman Marcus Gavius Apicius could make for great reality television if he were around today.

Apicius — immortalized by the cookbook attributed to him, De re coquinaria (Of Culinary Matters) — was famous for his love of fine foods and entertaining. The first-century foodie was also a prolific saucier — he's thought to have authored instructions for 400 sauces. Alas, his food habit was costly to maintain, and he eventually ran through his fortune. 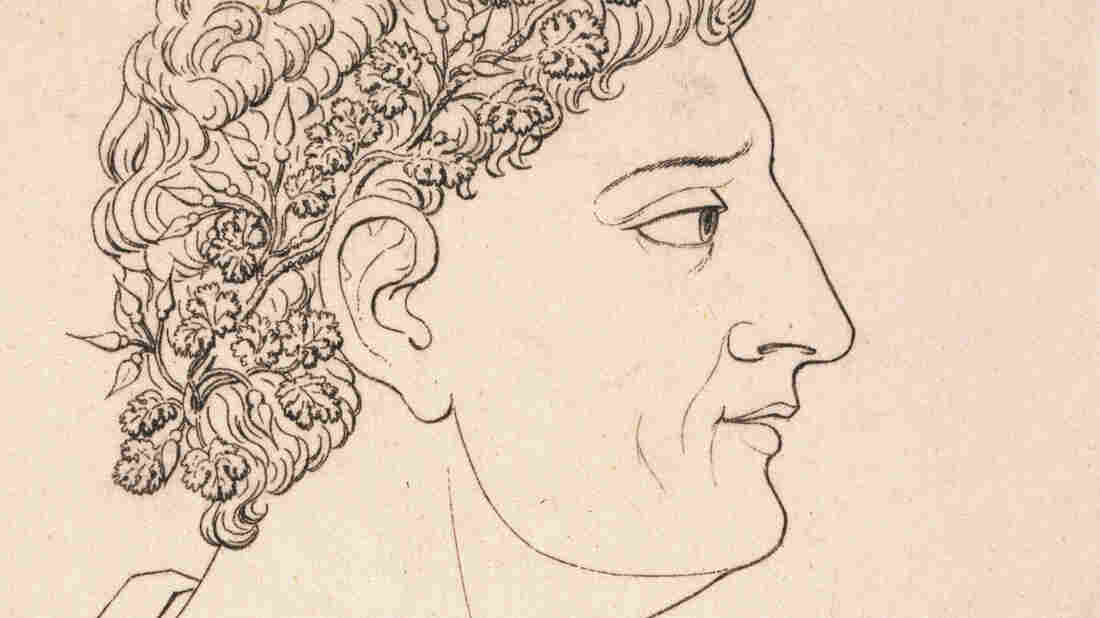 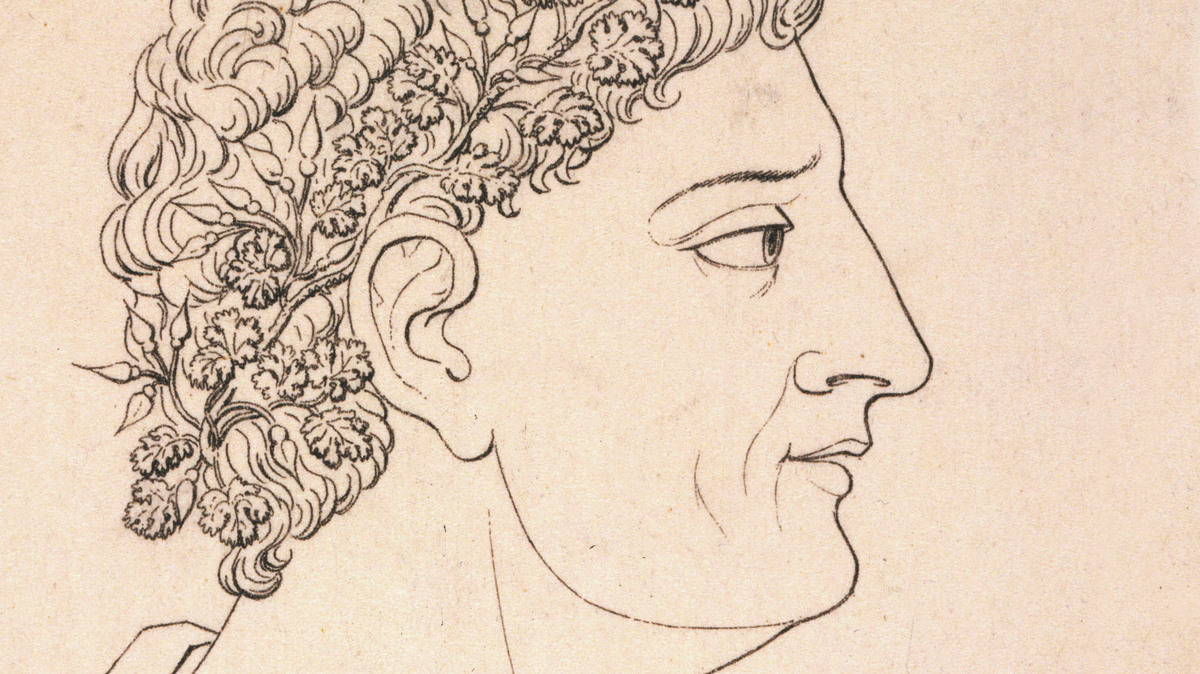 Marcus Gavius Apicius spent his vast fortune like a true foodie — on lavish feasts for himself and guests.

"So he gave one final feast," Sitwell says. "In the final course, the final dessert, he poisoned himself and died. He thought, 'If I can't eat good food, I will check out of this world and die.' "

Many of the meals Sitwell documents appeal to an ancient palate; they would be hard to re-create today — and frankly, tastes change so much that you might not even want to try. That's true not just when it comes to recipes from antiquity but also those of more recent vintage. 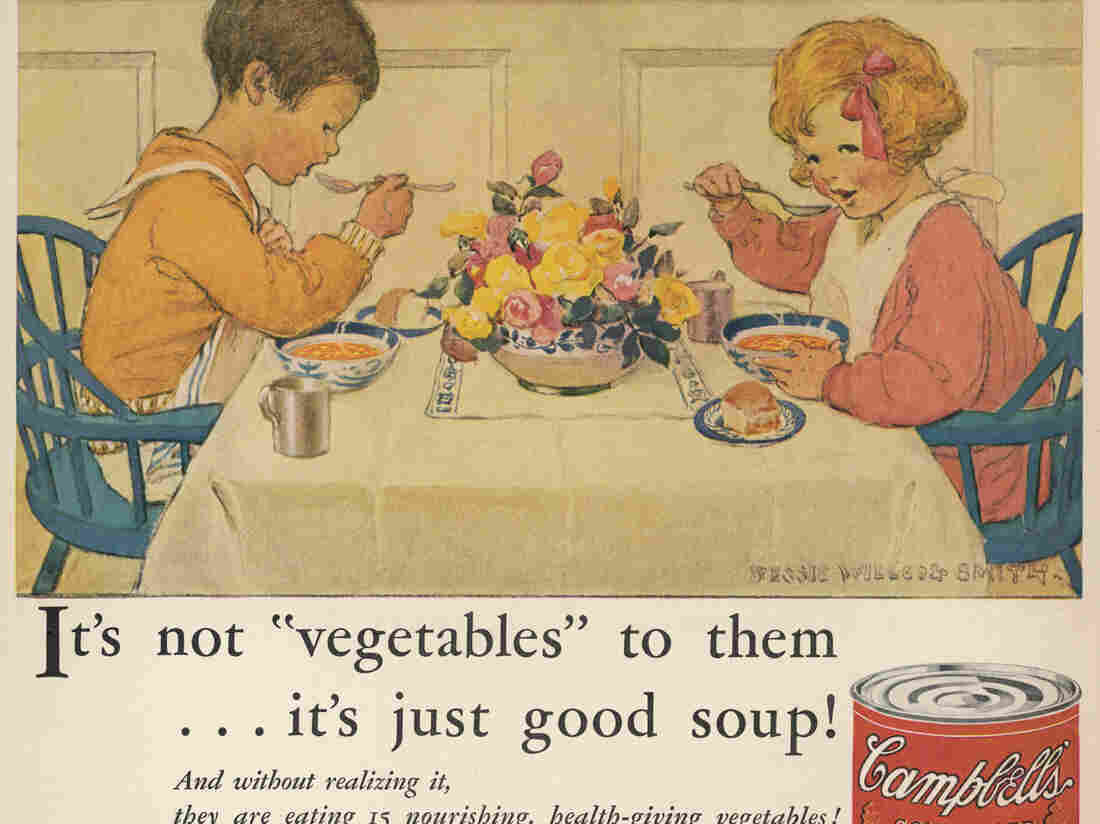 Two children with napkins around their necks enthusiastically tuck in to a steaming bowl of Campbell's vegetable soup in this vintage ad. Mary Evans Picture Library/LUCIN hide caption 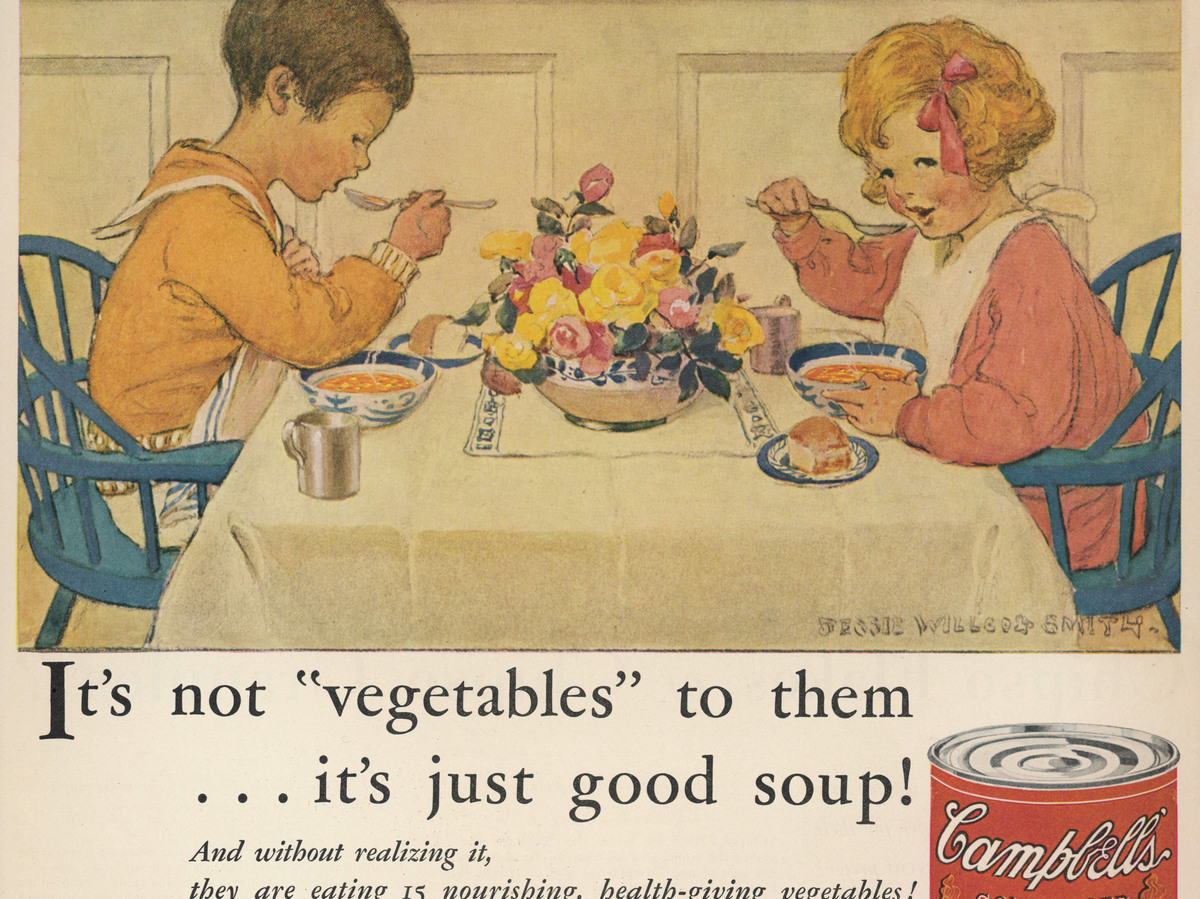 Two children with napkins around their necks enthusiastically tuck in to a steaming bowl of Campbell's vegetable soup in this vintage ad.

In the 1950s, housewives embraced convenience foods — and food companies encouraged the trend with recipe ideas built around their products. "Most of them were pretty foul," Sitwell says, "especially the Chicken Jelly Loaf." That dish boasted an, ahem, interesting combination of ingredients: Campbell's consommé, cold chicken, slices of tongue and stuffed olives.

Not exactly a meal you'd find on supper menus in 2013, but it's a reminder of how far food has come, and of the pioneering individuals whose cookery brought us here.