Accessibility links
Mastering A Sea Monster: From Greece, A Lesson In Grilling Octopus : The Salt The Greeks have been eating octopus since ancient times, but there's an art to grilling these tentacled sea creatures. An octopus has to be dried in the sun for at least a day first. Otherwise, the flesh just steams and turns into "a rubbery mass." 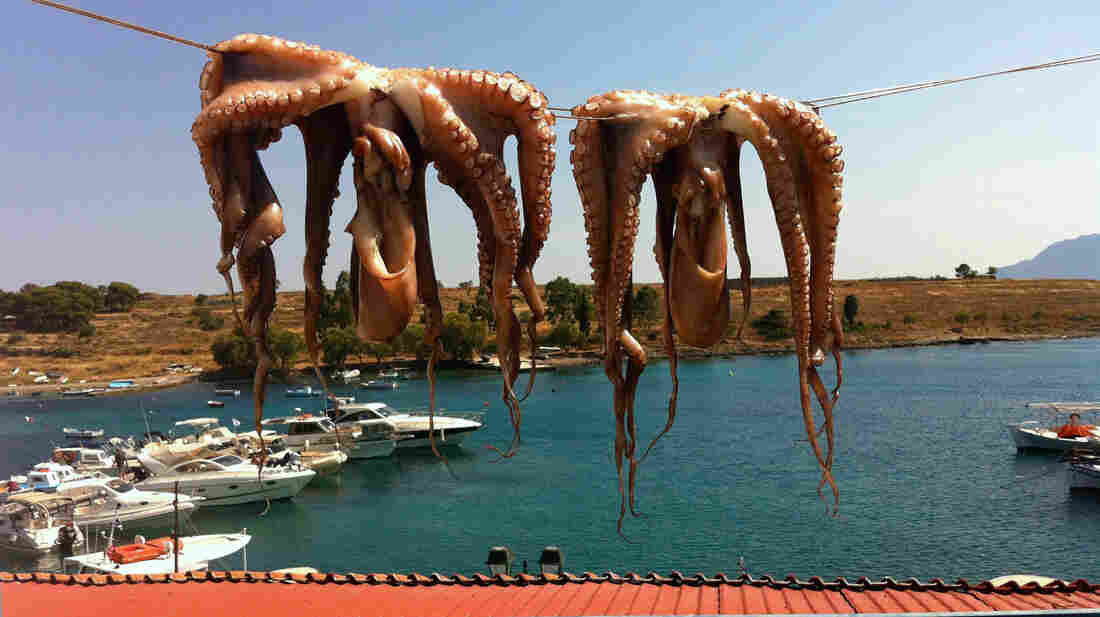 For octopus flesh to be tender enough to grill, it must be dried in the sun at least one full day. Joanna Kakissis for NPR hide caption 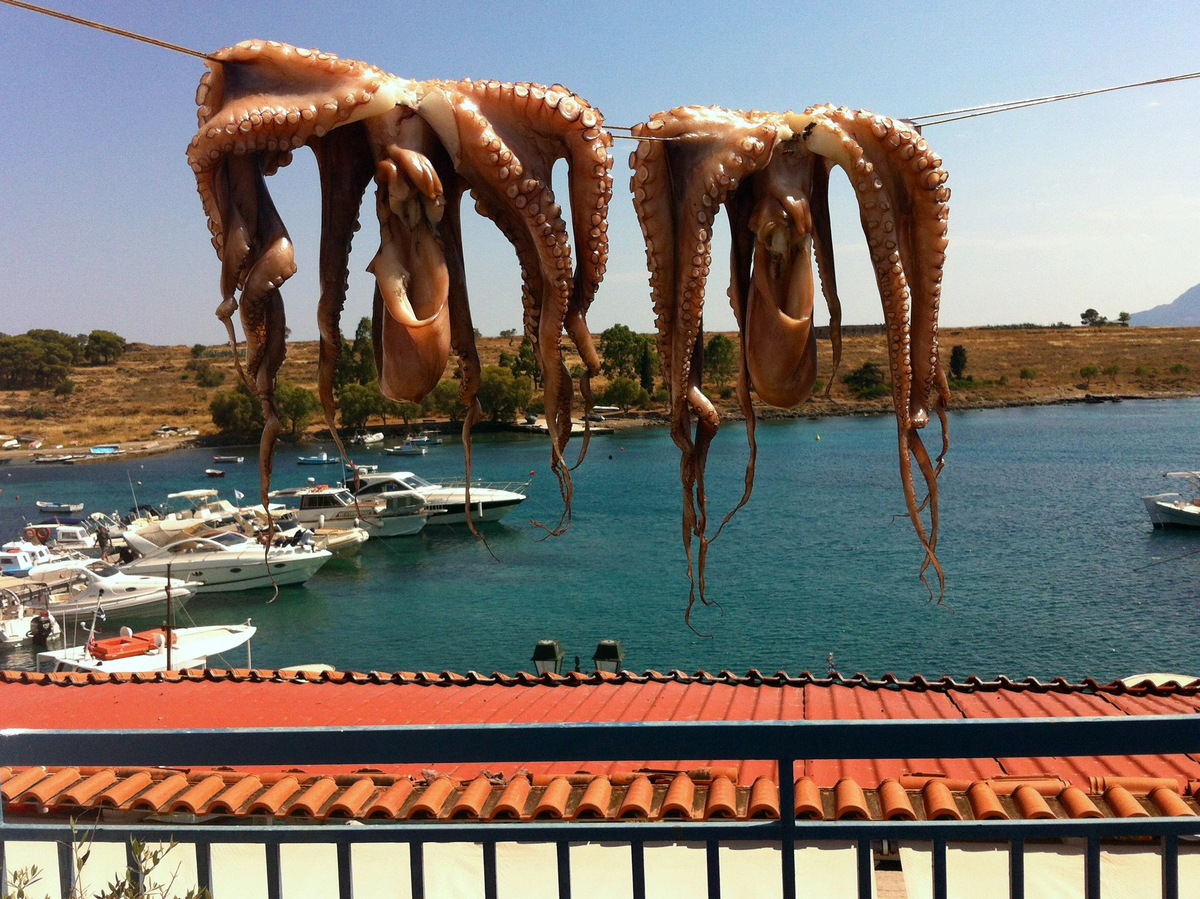 For octopus flesh to be tender enough to grill, it must be dried in the sun at least one full day.

The Greeks have been eating octopus since ancient times, and it's still on the menu of the country's many psarotavernes, or fish taverns.

On the islands, where the catch is often fresh, octopus is grilled over charcoal, seasoned with fresh lemon and served with ouzo. Friends and families often share this special summer meze during a hot day at the beach.

On Aegina, an island of pistachio trees off the coast of Athens in the Saronic Gulf, some of the best grilled octopus can be found in the southern seaside village of Perdika.

Small sailboats and speedboats are docked in the tiny port. Just above the port are the fish tavernas. The busiest is Miltos, a whitewashed little place with blue doors and outdoor tables. A street musician with a sunburned face plays a folk song on his clarinet. He weaves through tables, serenading local families, Spanish tourists and me and two journalist friends from Athens. 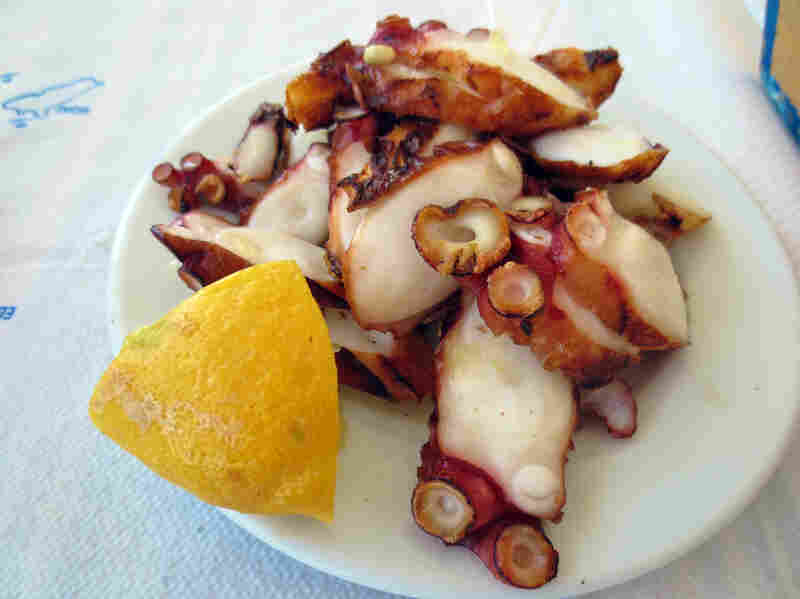 Grilled octopus at Miltos, a seaside tavern on the island of Aegina. Joanna Kakissis for NPR hide caption 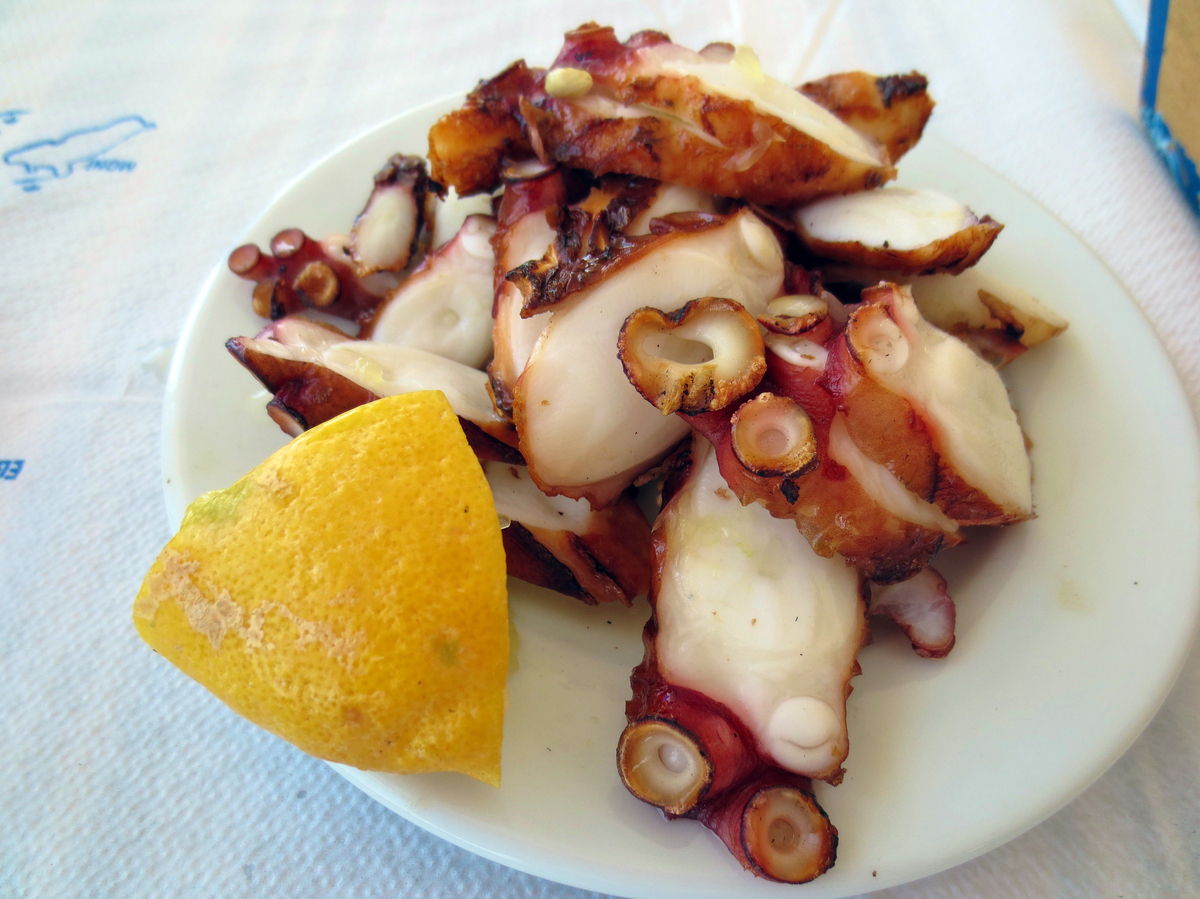 Grilled octopus at Miltos, a seaside tavern on the island of Aegina.

He motions over his shoulder to a man with a bushy mustache and a graying ponytail — Spiros Nikolaidis, the grillmaster at Miltos taverna. He's sprinkling sea salt on foot-long octopus tentacles that are cooking over a hot outdoor grill.

"How long does it take for one of those to cook?" I ask, looking at a sizzling tentacle.

"Thirty minutes, maybe 45," he says. "It depends on how much time the octopus has spent drying in the sun."

He points to the tavern's rooftop terrace. Two pink octopi — or is it octopuses? — are hanging like shirts on a clothesline.

"They've been up there since morning," says Miltiadis "Miltos" Trimis, the taverna's owner.

As a young man, Trimis traveled the world as part of Greece's merchant marine. In 1987, after getting married and starting a family, he opened his taverna on Aegina, where some of his relatives lived.

"We get our fish straight from the fishermen's boats," he says. "Fresh fish grilled right away is always delicious."

A fisherman usually traps an octopus and kill it by slicing a nerve between the eyes. Then he — or in rare cases, she — beats the carcass on a rock up to 100 times to wring out the water.

"Like any creature, the octopus is made mostly of water," writes Peter Minakis, a Greek-Canadian food writer, on his popular food blog Kalofagas. "If one were to throw an octopus from sea to grill, all that water in the octopus would simply steam it into a rubbery mass."

This story is part of All Things Considered's summer series, the Global Grill.

That's why Trimis hangs a fresh catch to dry.

"We hang [the octopus] on the clothesline first thing in the morning and don't take it down until the evening," he says. "In the old days, when there weren't freezers, people here used to sun the octopus for days until it was tiny and fit into a little carafe. But it expanded to its original size when it was cooked."

For cooks who do not live on the Greek islands, Minakis suggests braising a fresh or frozen octopus until it's about half its original size. He often adds a wine cork to help in the reduction.

My friends and I toast when our plate of grilled octopus arrives. Spiros Nikolaidis, the grillmaster, has cut up the tentacles into one-inch pieces and served them with wedges of lemon.

My friend Deepa, an adventurous eater who once ate raw camel's liver, is trying it for the first time.

"You know what's really interesting?" she says. "I thought it'd be more rubbery than it is. It's kind of crunchy and chewy at the same time, if that makes any sense. And it has just this little bit of lemon, which is just perfect on it. It's light and refreshing at the same time, and it'll go down really well with this wine."

He's been grilling octopus for 17 years and can tell when the meat is white and tender.

But he says he's repulsed by the idea of tasting it.

"I won't eat octopus," he says. "I will eat anything but octopus."

1 medium to large octopus, beak and ink-sac removed (most octopi are already cleaned)

Place your octopus (throwing in the cork is optional) in a pot over high heat and cover. Allow the octopus to boil for about 5-8 minutes. Take the lid off and have a look to see if the liquid has been released (the octopus should be almost covered in liquid). Place the cover back on and reduce the heat to a medium-low and simmer for about 45 minutes (checking occasionally to see if there's enough braising liquid). You may add some more water and continue to braise until the octopus is fork-tender.

Remove from the heat and add wine, balsamic vinegar and some Greek oregano. Allow the octopus to steep until the liquid has cooled or place in the fridge overnight.

When ready to grill, pre-heat gas or charcoal grill to a high heat. You may cut the octopus now or after it's grilled.

Take the octopus out of the liquid and place in a bowl. Add some olive oil, balsamic vinegar, dried Greek oregano, freshly ground black pepper. Sea salt is optional.

Place the octopus on the grill and sear for about 2-3 minutes on both sides. Remove and place on a serving plate. Drizzle with extra virgin olive oil, a squeeze of fresh lemon juice, a good sprinkle of dried Greek oregano and a little sea salt.

Serve as part of an array of Greek seafood appetizers (mezedes) with some ouzo or tsipouro.

Beat the octopus 100 times on a smooth rock, then rub it on the rock with a circular movement, sprinkling it often with sea-water, until the tentacles become curly or the membrane between them can be easily torn. It can be preserved very well in deep freeze for several months. It is often more tender and tasty if it rests for some time in the freezer before cooking.

Place the pieces over a low-burning charcoal fire. Add sea salt. Turn every few minutes and check if the tentacles are fork-tender.

Cook for about 30 minutes, then add freshly-squeezed lemon juice.